At the end of July, I had my first real business trip.  I headed down to Okinawa to research the craft beer industry as well as to expand Taiheiyogan into Okinawa.  I couldn’t really say too much as it was a secret at the time but it was really effective and I was able to get a lot of business done.  I surprised myself in how much work I was able to do with so little planned, and I even burned myself out with all the work I had to do.  Being in the beer industry and drinking beer isn’t the best thing in the world, even if it seems like it from the outside. 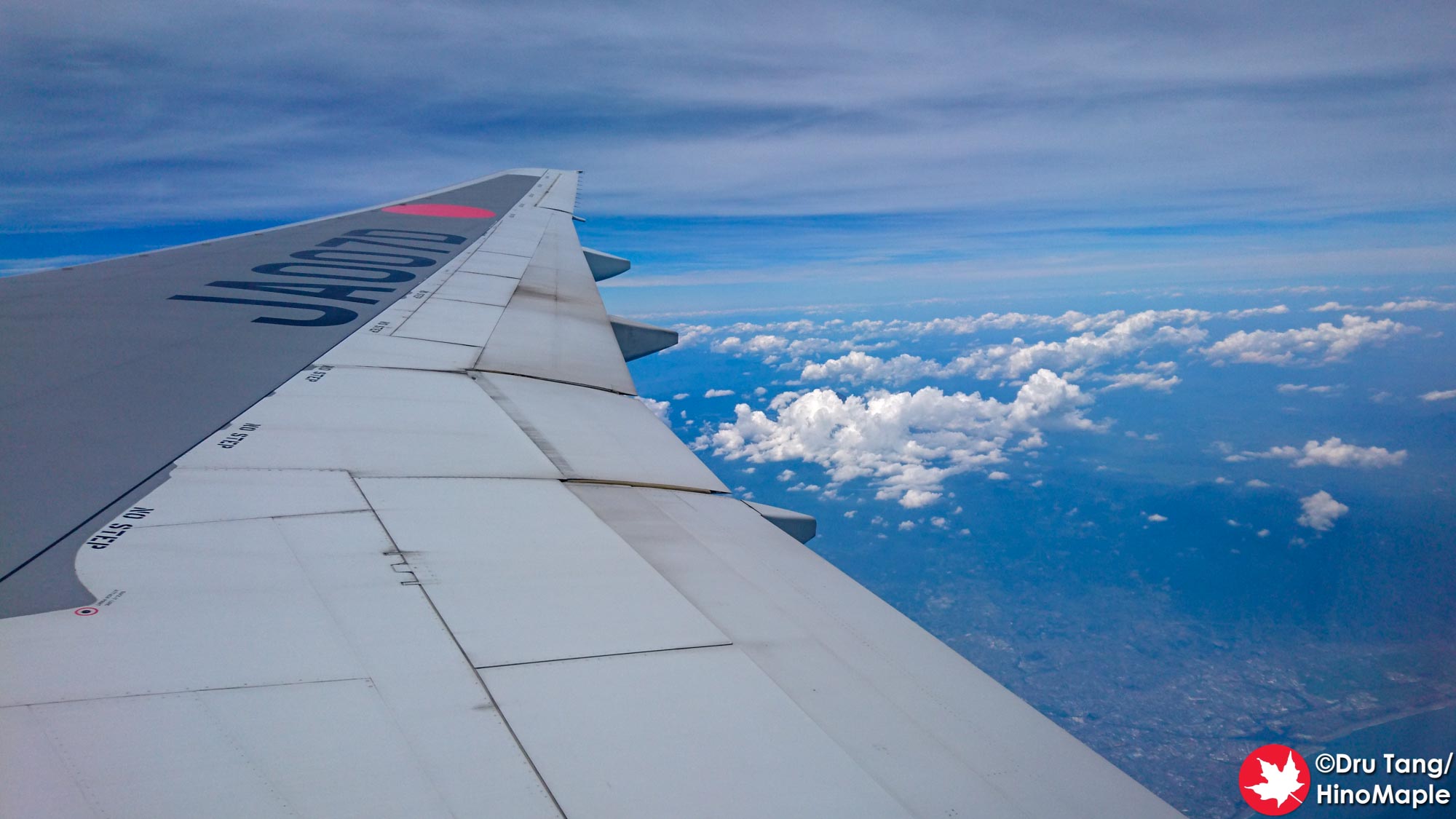 The business trip itself started with me running the second I landed in Naha.  I arrived in the mid-afternoon and after I grabbed my bags I headed straight to my first appointment.  It takes a while for me to be able to get my work done at each shop but I was able to get photos as well as video done for one shop just on time.  Thankfully my video editor was able to join me and do all of the camerawork.  My business partner wasn’t able to join as he had family obligations.  The night ended with me and my video editor getting traditional Okinawan food for dinner, some Awamori, at Yuunangi, as well as going to my favourite beer bar in Naha, named Baku. 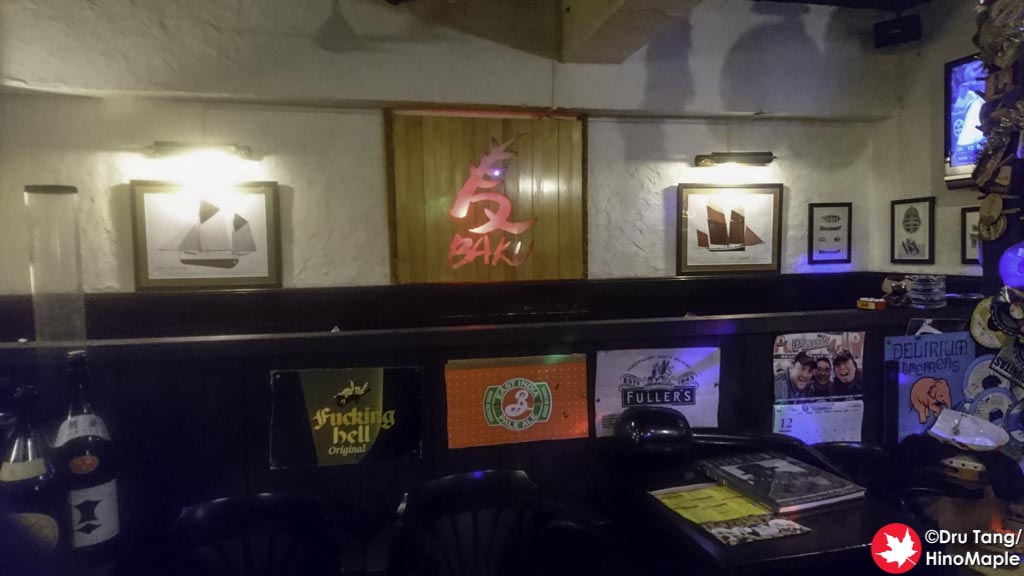 Baku is a place that I love to hate.  It is a great place and I can drink a lot when I’m there.  I always meet someone when I visit and I often drink too much, however the first night lead to me getting 2 appointments.  Before I left for Okinawa I only had a couple appointments, but thanks to my networking I was able to get 2 confirmed appointments on my first night in Okinawa.  My business partner did the rest to make sure I was busy during the trip. 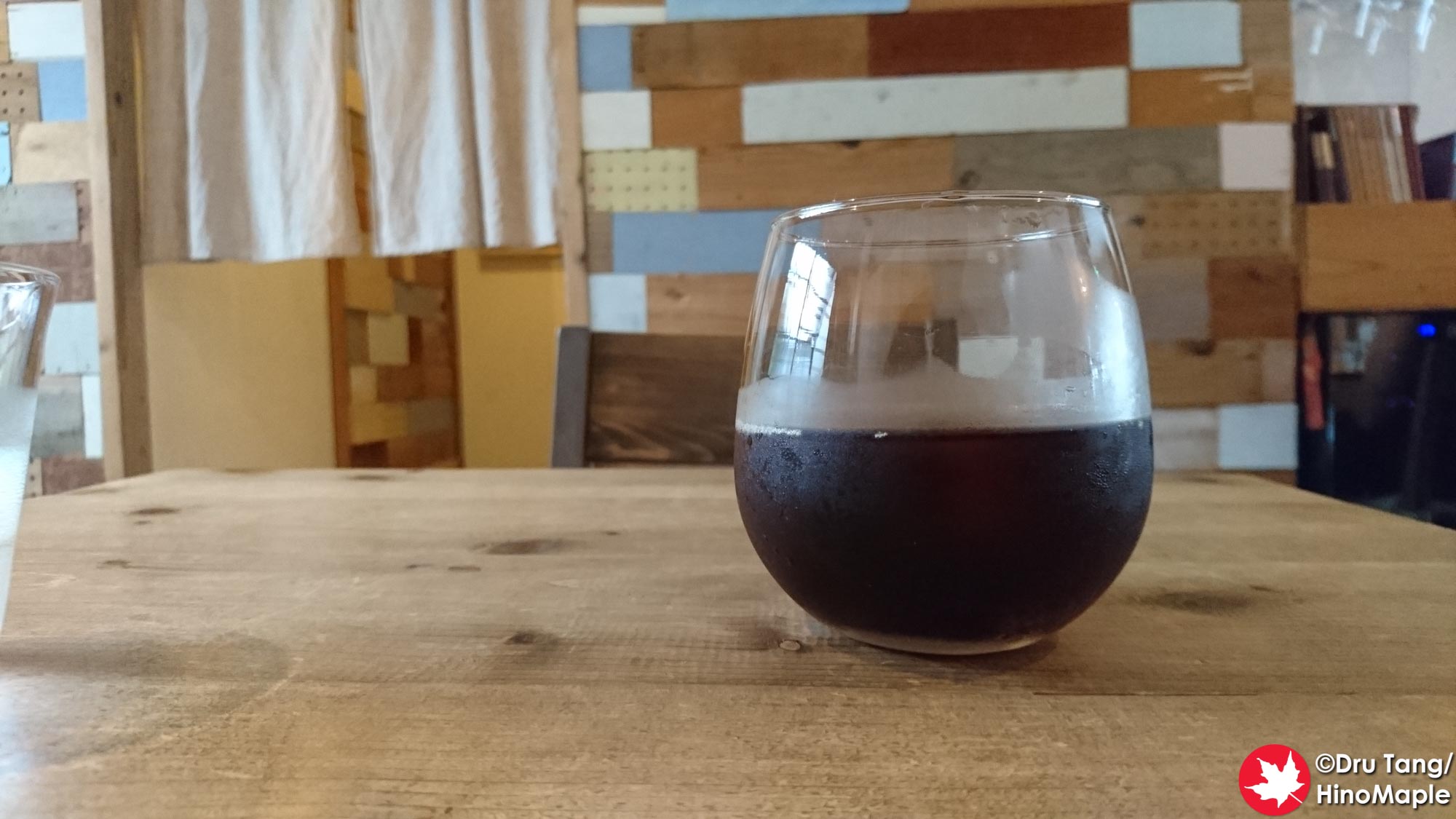 Coffee break after a long walk.

The other days were more of the same.  I visited between one and three shops in a day; took photos; did some videos; and talked shop with the people of each place.  I did a ton of walking on each day as I had to audit different places to determine if they met the criteria for Taiheiyogan.  The second day was probably the most difficult as I walked 9km in the searing heat of summer in Okinawa looking at different shops.  While the heat isn’t the worst part, the humidity was killer.  I would be outside and my shirt was soaked with sweat.  I really didn’t enjoy it as much as I would have liked, but I survived.  It was really hard on my body so I made sure I took it easy.  While I wasn’t expecting anything, I was still able to discover new shops on my walkabout. 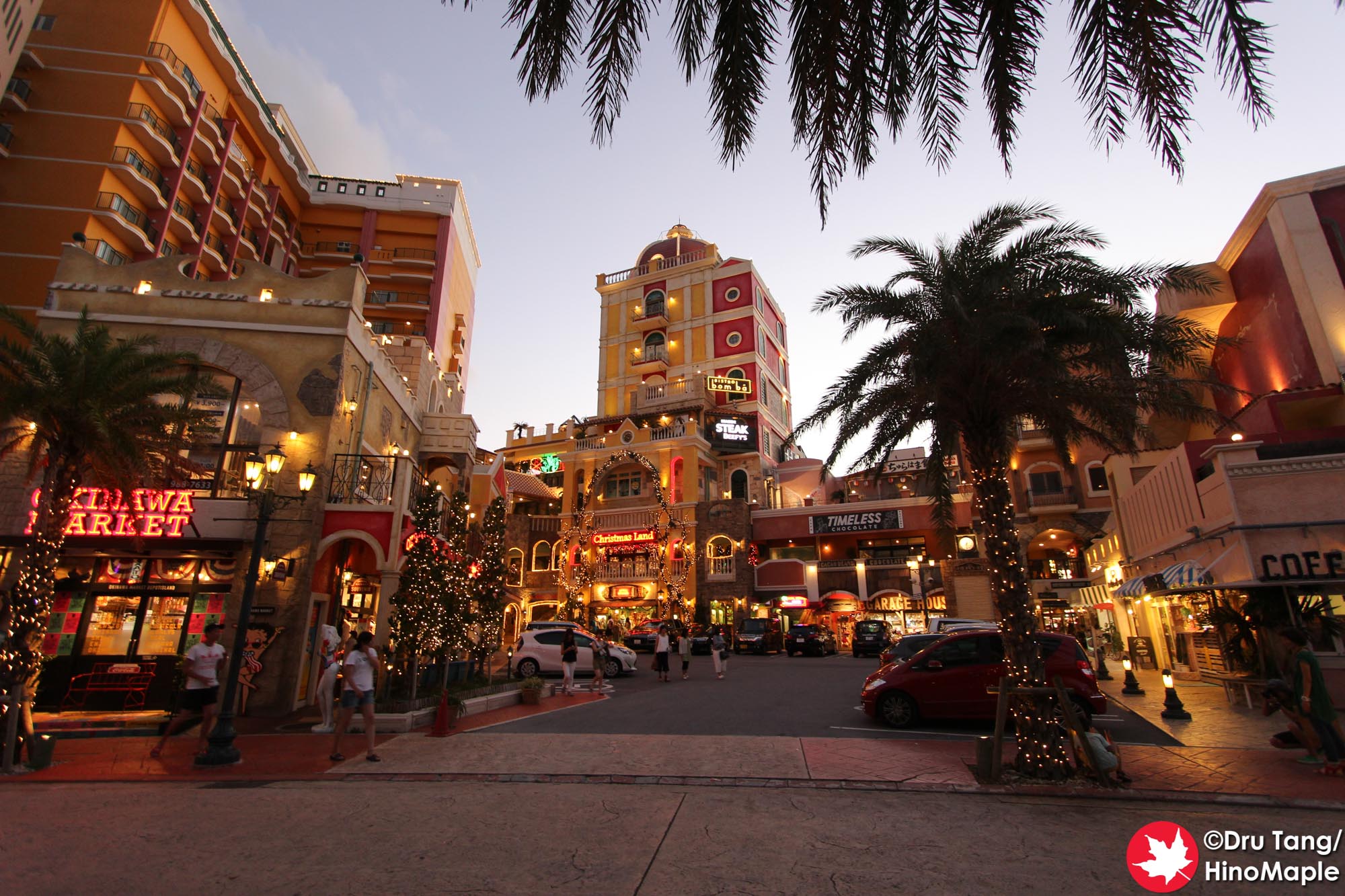 The third day of my trip had me travelling north to Chatan.  It was my first time to do so and I was able to easily get my bus ticket and get up to Chatan.  We arrived a little early, got our bearings, and checked out American Village a little.  It was nice to see this new area and while I was doing well overall, my body was really feeling the effects of the heat and work.  I was starting to get tired quickly and regretted that I was on this business trip.  It was my third night filled with booze and while it was nice, it was also work; sometimes you don’t want to drink but you have to because it is necessary to say hi to people.  Needless to say, I was careful and decided to really work on my schedule so that I wouldn’t be overloaded. 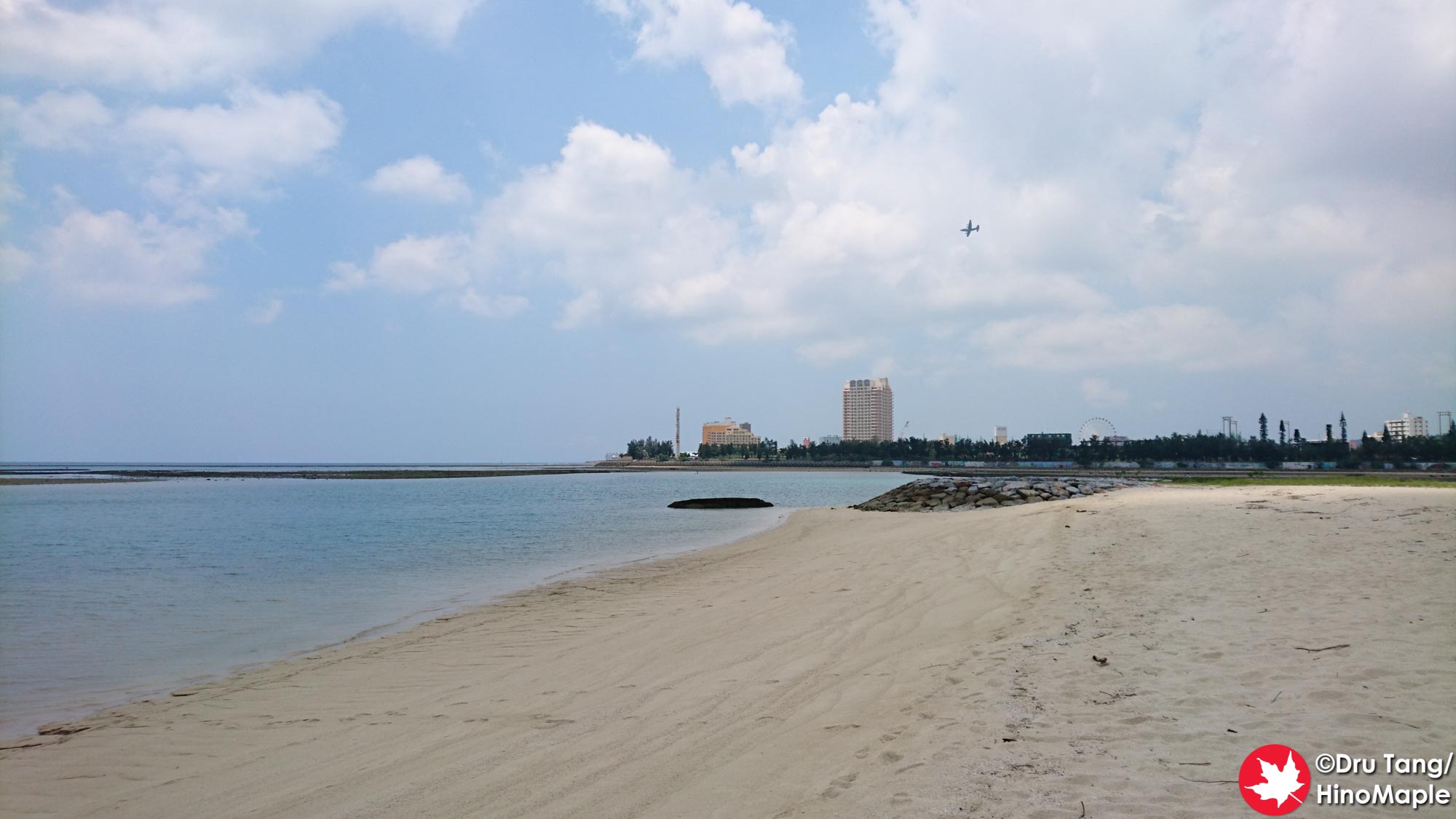 Day 4 was the day that I recovered and got my groove back.  With most of the morning off, having cancelled and rearranged my schedule a little, I was able to spend 30 minutes on the beach as well as just taking a little “me” time to decompress.  I still had to visit a craft beer shop to take photos and videos but otherwise it was a nice time to take it easy.  It was also the last day with my video editor as he had to return to Tokyo the next day. 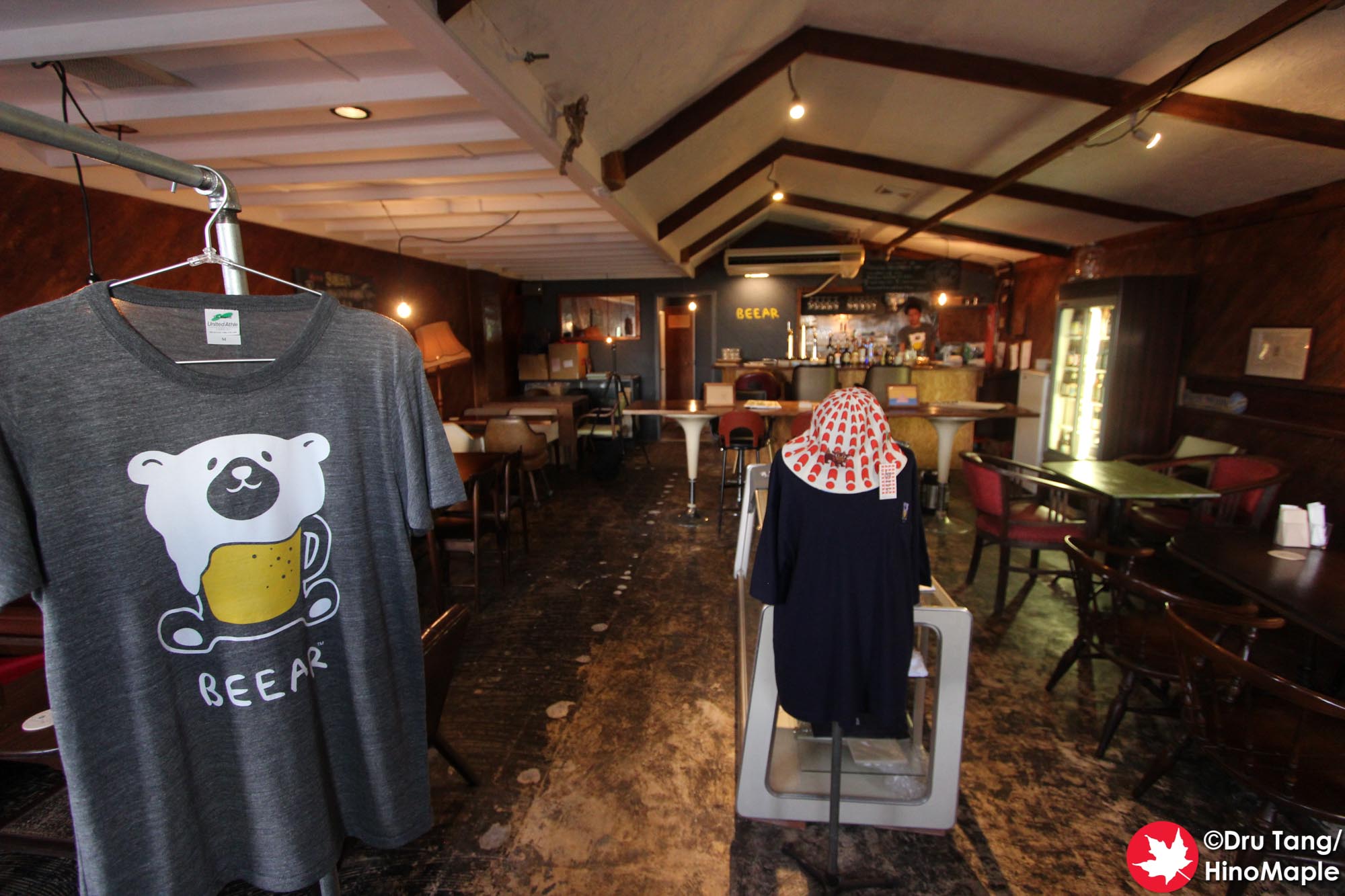 Somehow being on my own from day 5 was helpful.  I was able to not worry about other people and just get my work done.  I started to do two shops in one day, and while it was hard, it wasn’t too difficult.  I was even able to get back to my hotel at a decent time and prepare for my trip back to Naha the following morning.  It wasn’t too easy but I was able to keep myself sane. 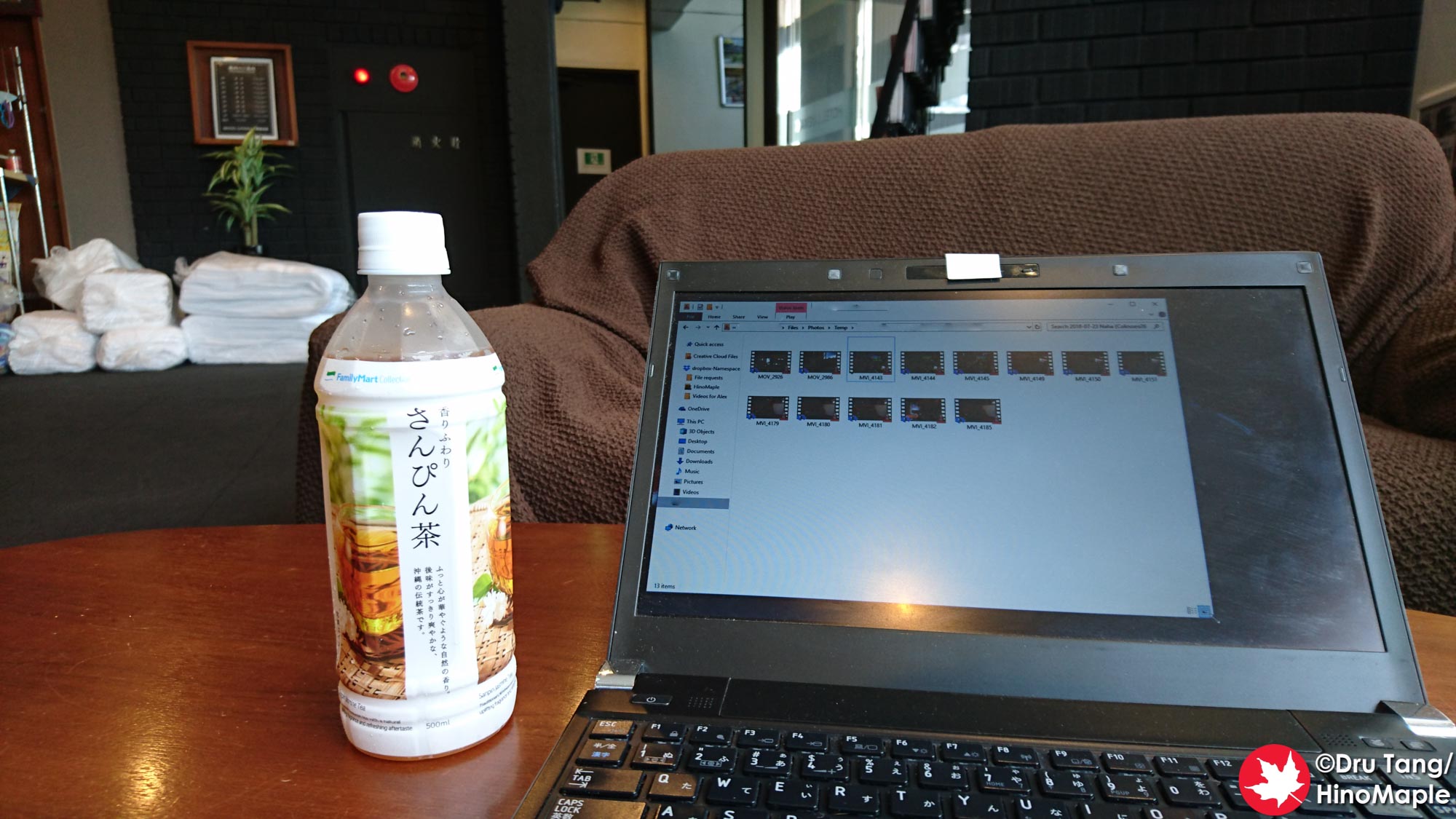 Working at the Hotel

Back in Naha, I had a tough schedule again.  My hotel was also in a bad location, about 15-20 minutes from the central core.  While this may not seem bad, remember that it was the middle of summer with high humidity.  It was draining to say the least and the 5kg of camera equipment in my backpack meant it was equally difficult to walk around.  Thankfully all of the people I met were great and I was able to enjoy a quiet afternoon in the hotel lobby getting my work done as well as going to a local restaurant with great Okinawan food. 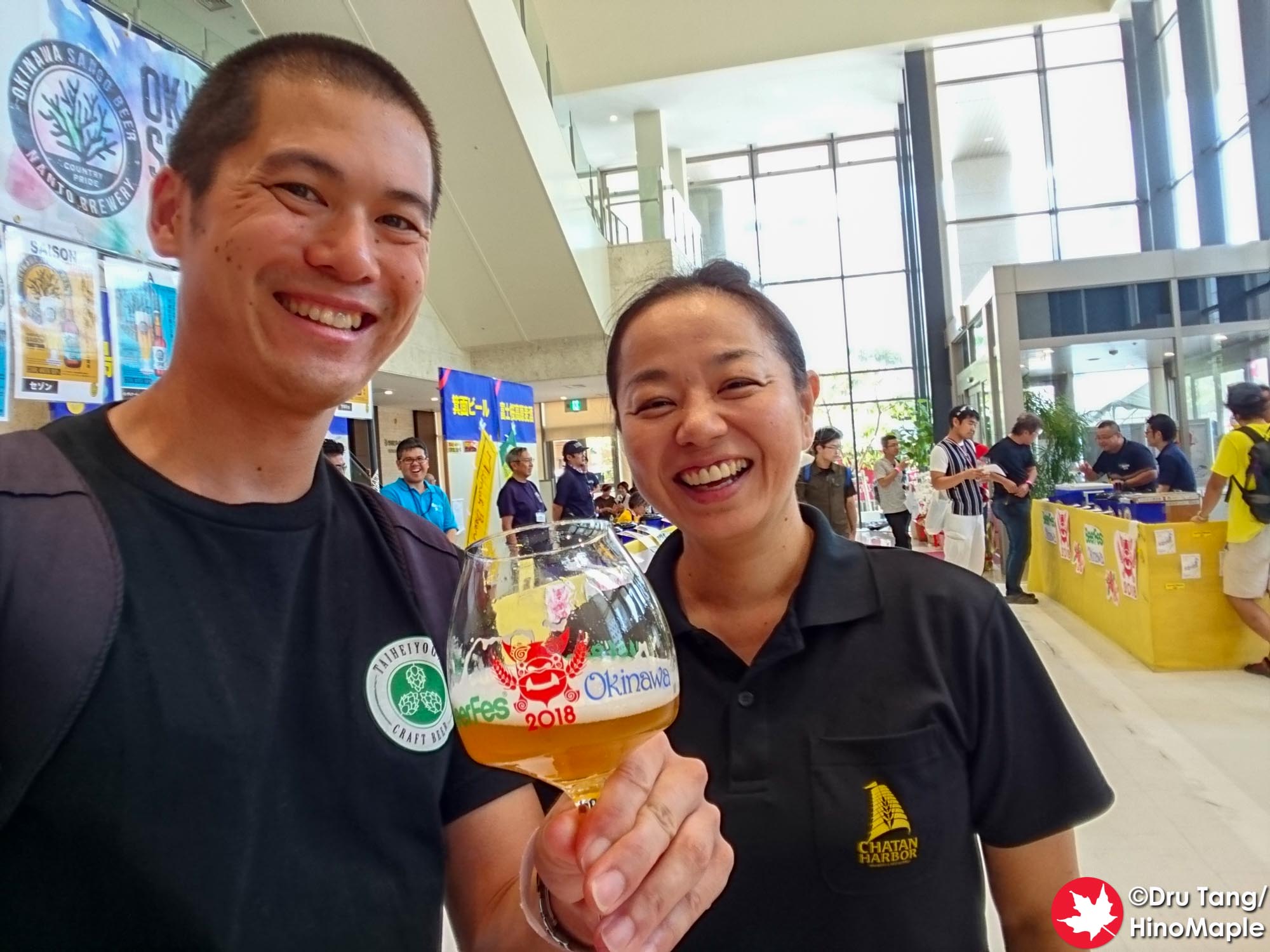 BeerFes Okinawa with the Head Brewer of Chatan Harbor Brewery

On the seventh day, He rested and so did I, kinda.  I intended to take the day off and just relax, but I was roped into going to the BeerFes Okinawa.  It ended up being like work but I really enjoyed it at the same time.  I was able to meet all of the brewers in Okinawa and make more connections with people.  I really had a good time and the people were really friendly.  They enjoyed learning about the Tokyo scene from different people and I was able to see some friendly faces from earlier in my trip.  The only real break I had was meeting an old friend that I hadn’t seen in around 7 years. 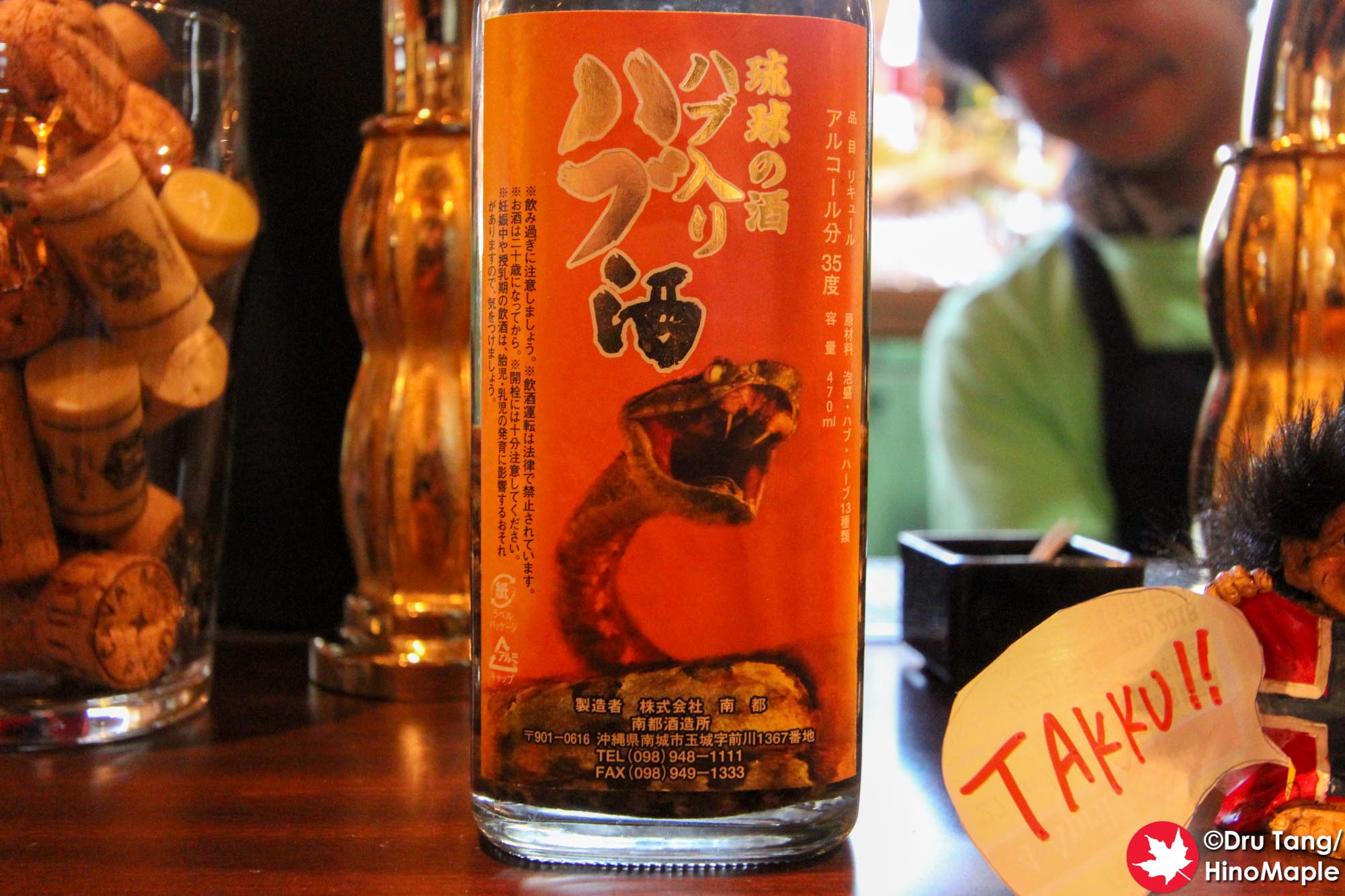 My last full day in Okinawa was jam packed.  I had 3 shops to visit and 2 videos to produce.  It started early and I was able to have an afternoon break, but I ended up going back to my hotel once to freshen up and drop off a few items to lighten my load.  I was able to get my souvenir shopping done too, but the night was crazy.  I finished work at 9pm and headed straight to my favourite bar in Naha.  I didn’t get to my hotel until 1am and my flight was at 10am.  Needless to say I had a great night out, but the next morning was rough. 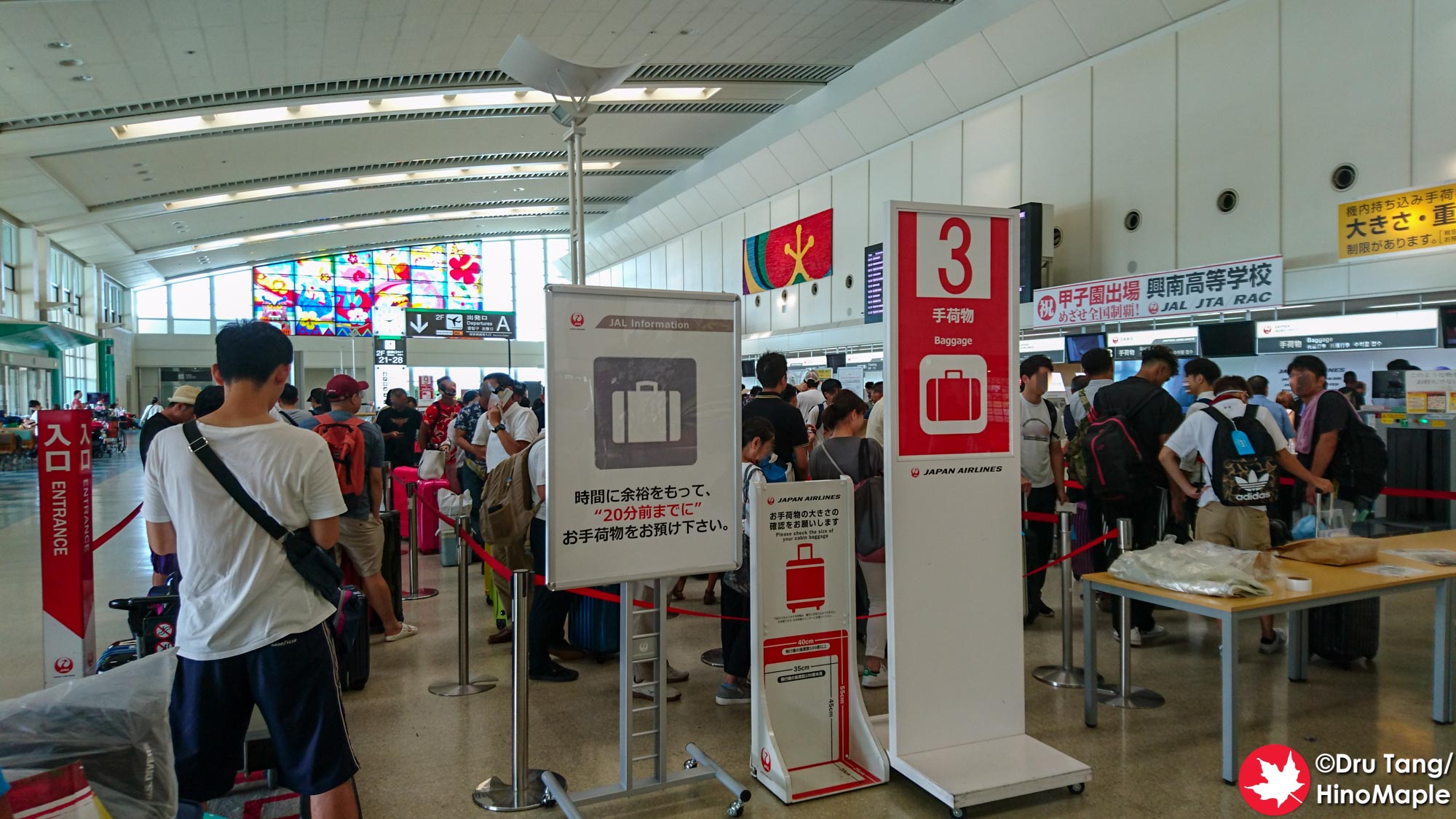 To say that my last day in Okinawa was uneventful was true, yet not true at the same time.  I had no problems getting to the airport on time but I was shocked at how long the lines to check bags were.  It took almost an hour to get my bags checked, so I had no real time to actually get souvenirs or do last minute shopping.  I was also hungover and in need of breakfast as I had no time to get food before I left the hotel.  I was not a happy camper but I survived.  It also didn’t help that I had a work appointment in Tokyo the same day so I had to rush from the airport and go to Yaesu before I could finally go home and relax. 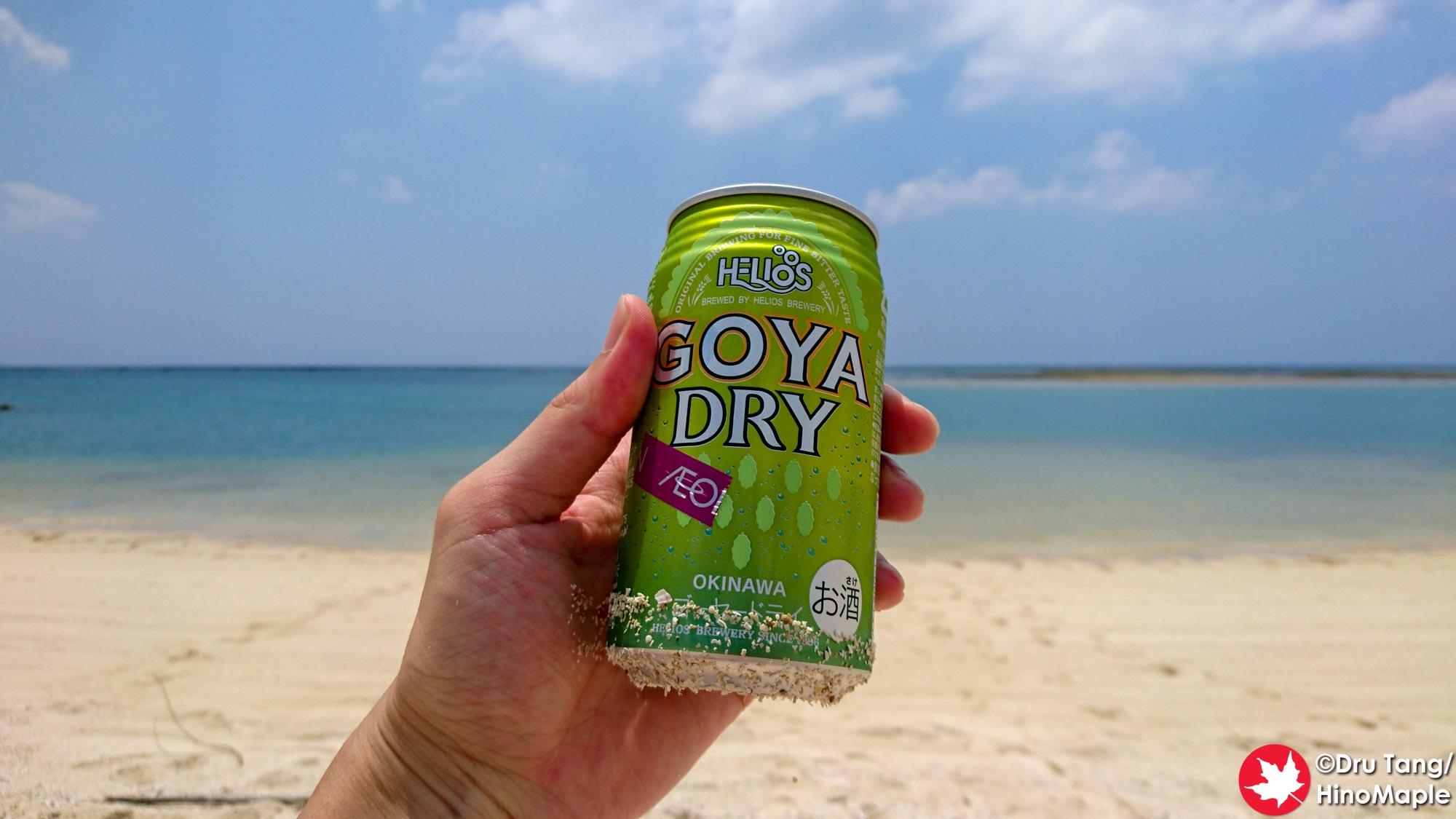 My business trip to Okinawa is a trip that I will never forget.  It was filled with fun but also work.  I am really conflicted as to whether I had fun or not.  When something is fun and you make it into work, it is hard to tell whether you are working or whether you are having fun.  I do enjoy it and I do enjoy learning more and more about beer, but sometimes I just want to chill out and have a full day to myself.  Next time I’m in Okinawa, I’m going to make sure I have a full day to myself with no work whatsoever; just a day at the beach or a day at a cafe.  Knowing myself, that will be hard as I tend to want to be doing something, but we’ll see what happens.