Over the past couple years I have been becoming a bigger and bigger football fan and I have become a big fan of Jubilo Iwata, a team that was originally a Yamaha corporate team before it was made “independent”.  I had an opportunity to see a game on June 18, 2017 before I headed to Canada and I don’t regret it one bit.  I was extremely happy that I was able to go and I had a great time. 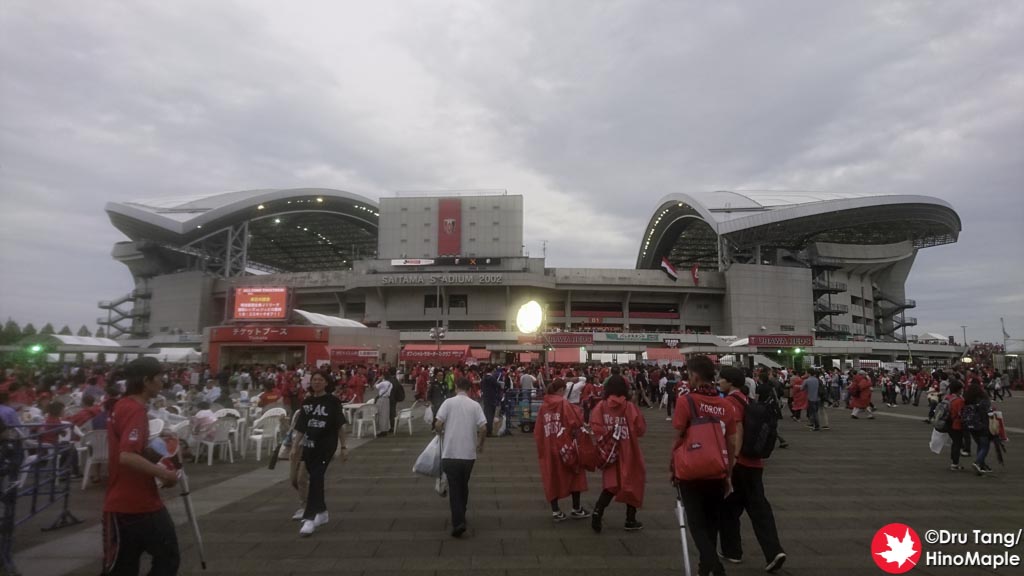 If you have read any of my other reports on visiting Saitama Stadium 2002 to watch the Reds, I have only watched games from the home stands so this was my first time in the visitor section.  It is always a challenge to get to Saitama Stadium 2002 as it isn’t very convenient for me to go there and it isn’t close to the nearest station, Urawa Misono.  I did the trek because I wanted to be able to see if the underdogs, Jubilo Iwata, could take on the Urawa Reds who are often a stronghold within the top tier of the J League. 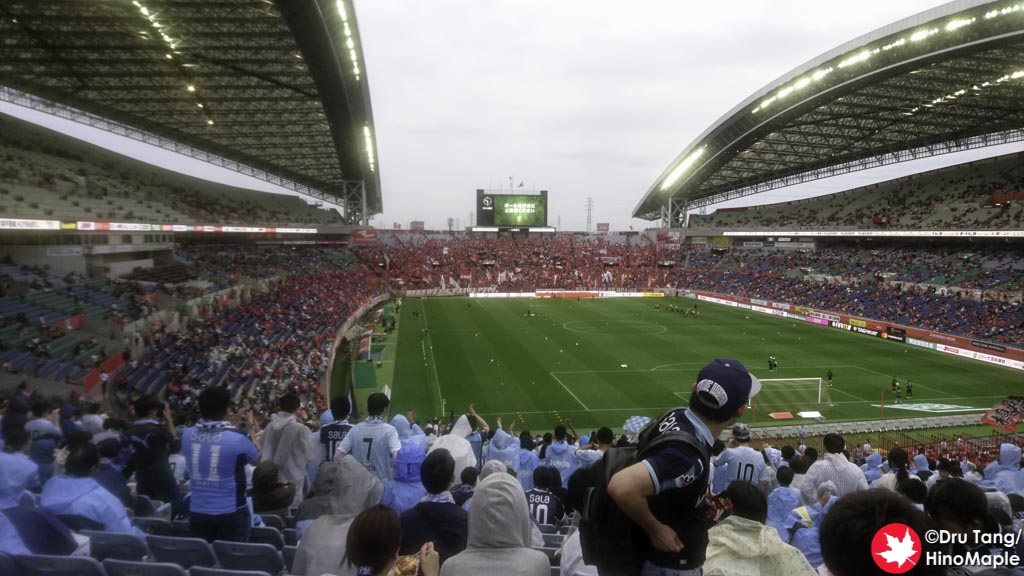 For anyone who wants to know how to get to the Saitama Stadium 2002 and watch a game, whether it is for the Urawa Reds or a visiting team, there is a Saitama Stadium 2002 guide on the stadium and how to get tickets that came out recently.  Needless to say, being my first time to the visitor side, things were really different.  I started off the event in the main plaza outside the stadium and it was a circus.  It was a sea of red and for obvious reasons.  Saitama Stadium 2002 has a capacity of over 63,000 people and the attendance number for the game was 34,700 with only 3,000 people in the visitor section.  Being outnumbered 10:1 was daunting, especially with the rabid Urawa fans. 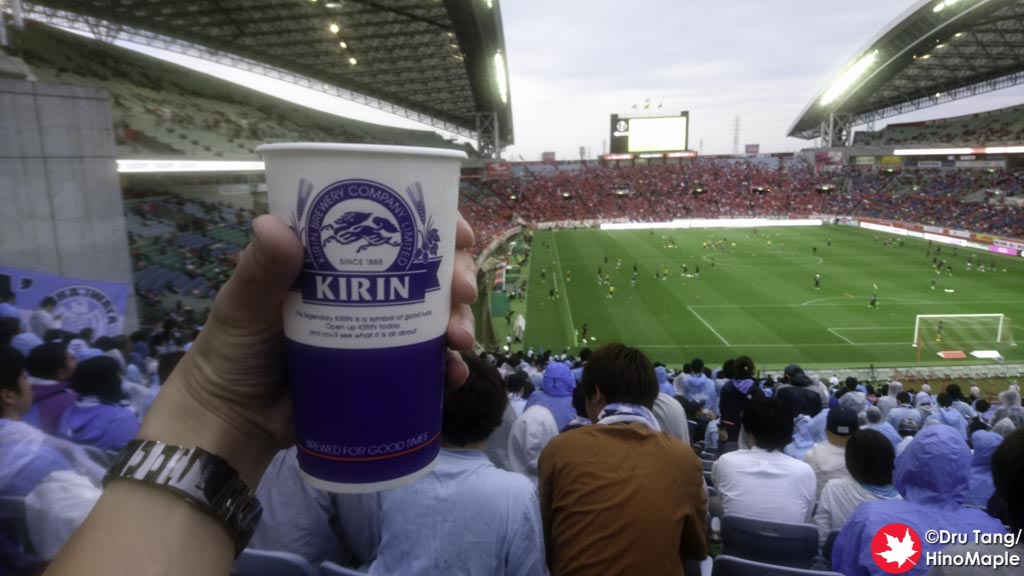 The visitor section requires you to enter through the main gate.  You have to go to the left side as it is closest to the visitor entrance.  You then pass a second gate for your own protection.  The visitor section was tiny compared to the stadium in general.  We had a single section for the free seating.  There was only a solitary food stand as well as a merchandise table for Jubilo Iwata.  It was pitiful to say the least but at least everyone seemed happy.  It was also my first time to be in the main cheering section so I wasn’t too sure what to expect when I got there. 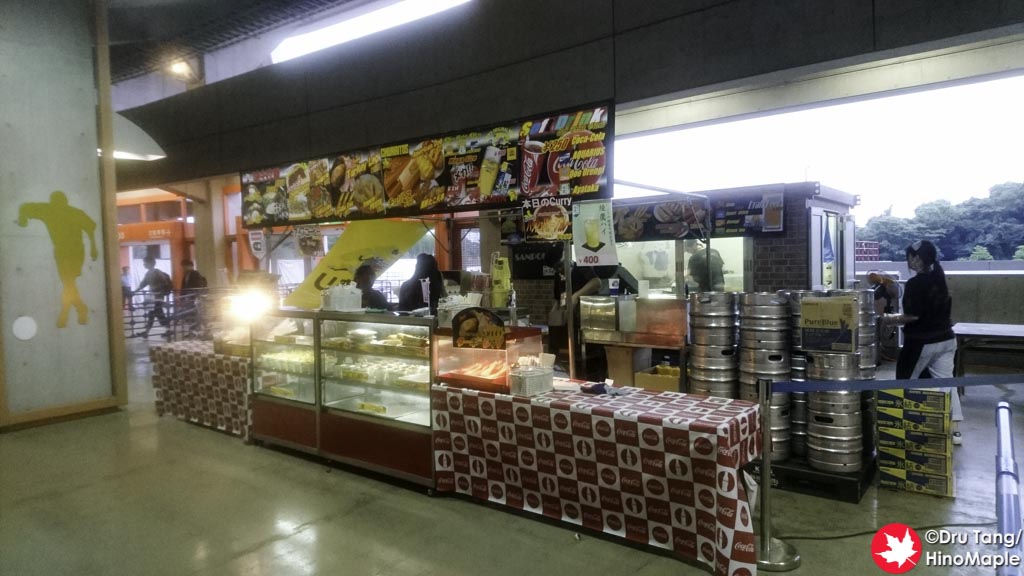 Food for the Visitors

The visitor section is always filled with the die-hard fans in the lower section with the other fans in the higher seats.  If you are looking to get swamped and caught up in the cheering it is best to go early and try to find seats in the lower section.  I went to look for seats with only 40 minutes before kickoff and the lower section was filled.  The upper section was also mostly filled but there were more than enough seats for small groups.  I was lucky to be somewhat near a cute old lady who was just as enthusiastic about Jubilo as the college students below, although without the gusto of the people below.  Needless to say I loved her.

Oldest Fan of the Night

The game itself started off slow.  The Urawa fans were cheering pretty loudly and they completely drowned us out.  I could hear the cheers of the Jubilo fans but it was hard at times as the Urawa side was overpowering.  Thankfully the Urawa side tired quickly and the Jubilo fans were more enthusiastic as it was an away game.  The first half wasn’t very interesting but towards the end the game got exciting as Jubilo opened the game up with a goal.  It was pretty beautiful but from our vantage point it was pretty hard to see.  Unfortunately this was followed quickly with a corner kick from Urawa that ended with a goal.  We were crushed but hopeful things would be okay.

The second half of the game was more exciting and a huge nail biter.  From the beginning Urawa was on the attack and Jubilo was working the errors.  Urawa opened the second half with a goal and the Jubilo fans just went into loss mode.  People were thinking it was okay as Urawa is traditionally a strong team so a loss is to be expected.  We were all hopeful but not expecting anything.  It wasn’t until the 68 minute mark when Adailton capitalized on a huge mistake.  There was a midfield pass and he was able to get around the lone defender to get a breakaway.  Urawa’s goalkeeper went to challenge and lost and the lone defender did his best but Adailton scored to tie the game up.  A late substitution of Matsuura for Jubilo meant they had a fresh midfielder.  Urawa made 2 more uncharacteristic mistakes which turned the ball over in their own zone and Matsuura scored twice.  Urawa fought really hard to come back but was unable to as the clock wound down. 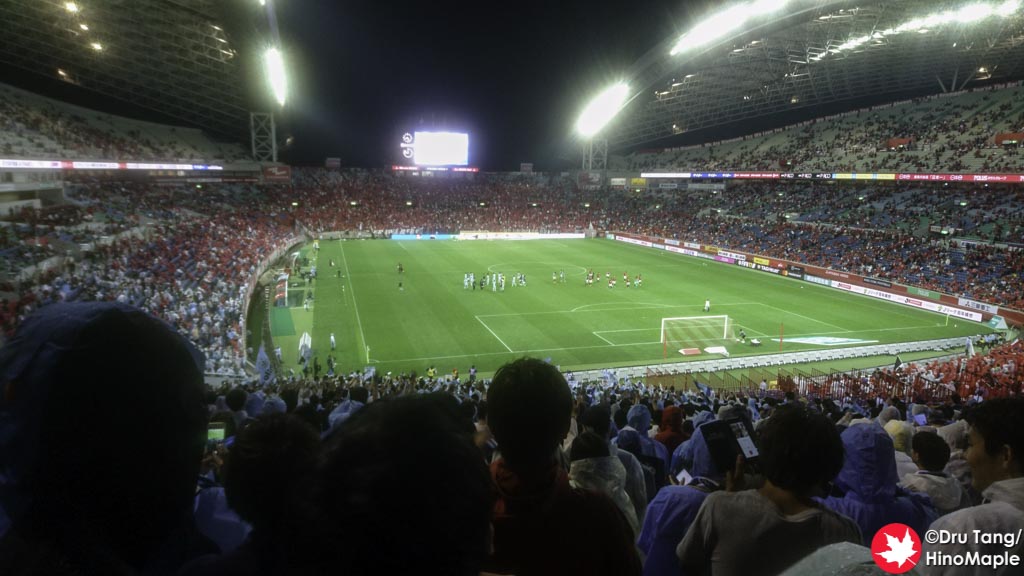 The game was a jubilant affair for the Jubilo fans and the team itself.  Everyone was screaming in joy when the final whistle was blown and I had the time of my life thanking the team for their hard work and giving the fans something to cheer about.  The same can’t be said about the Urawa fans.  When their team went to say thank you for coming out to the fans, they all booed pretty loudly.  People in the Jubilo section were not necessarily surprised as it is a common occurrence but the voracity of their jeers was a bit overpowering.  Considering that at the time of the game they were on one of their worst streaks in a while and went from the top of the league to 8th it was a tough pill to swallow.

Urawa Reds fans are hard-core fans that will do anything to win.  They have no loyalty to their players and when they get old they are willing to call in new players whenever possible.  It is a bit sad but understandable.  This is one of the reasons I have grown to not really like Urawa as much as I had in the past.  Jubilo is an underdog and having them in the top tier, even if they are a mid-ranked team is perfectly fine.  It makes the wins all the more important.  You can be sure that I will be going to more Jubilo games in the future whether it is at Saitama Stadium 2002 or not.