Nakijin Castle was the old capital of the northern kingdom of Okinawa’s main island.  It is an amazing castle ruin that has a lot of history that needs to be understood to really appreciate what you are seeing.  I was on a guided tour so I was able to learn a bit more than if I was just walking around on my own so I was a lot happier with that.  Unfortunately it was a guided tour so I wasn’t completely free to just explore things as I would have liked. 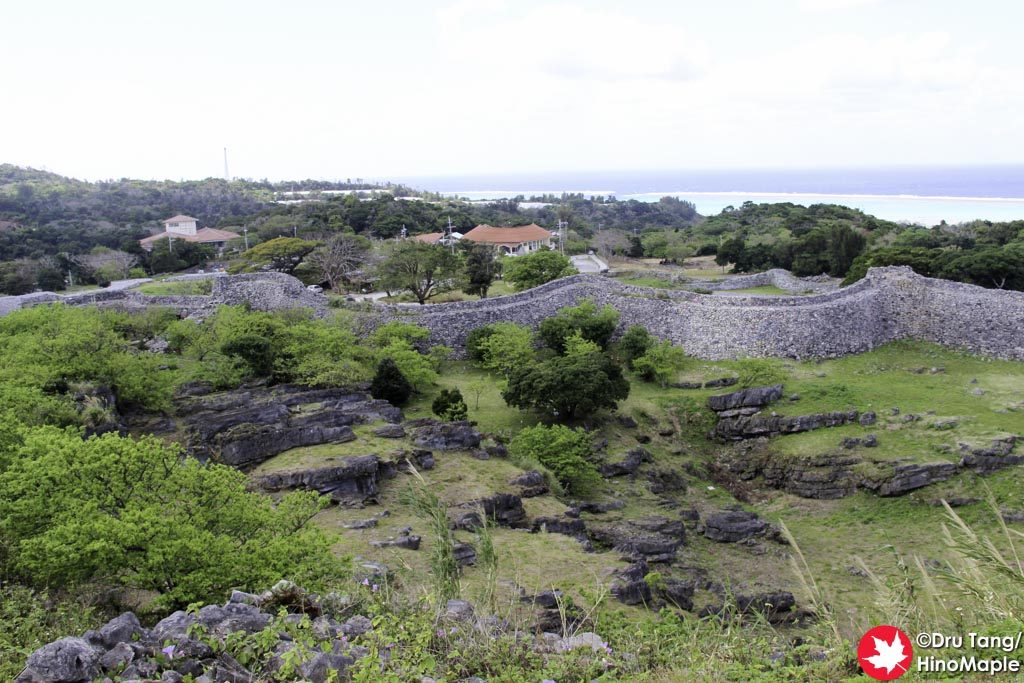 The central parking lot is very small and most people probably won’t be able to park there.  We were dropped off by the bus and the bus headed below to the main parking lot.  The ticket gate is located in this tourist section and you can quickly buy tickets and head straight for the castle, which I recommend. 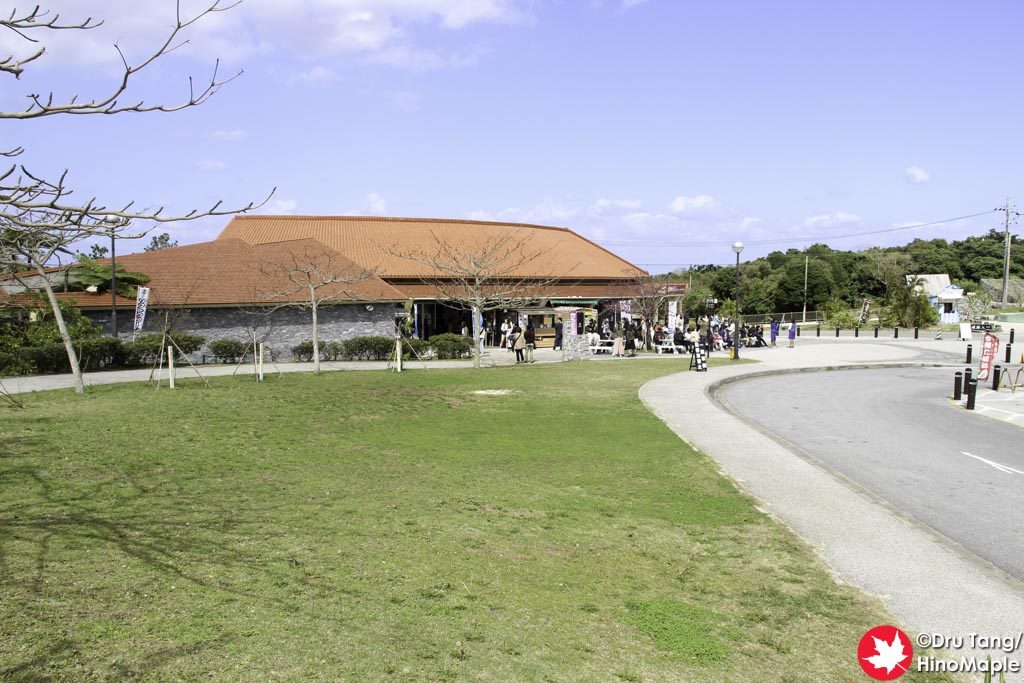 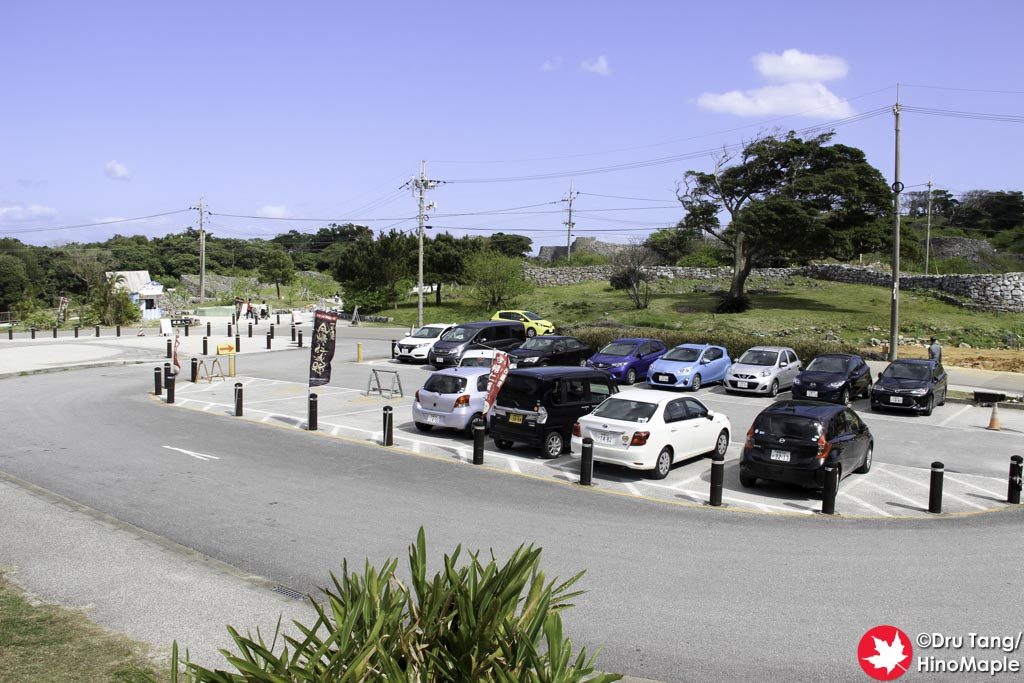 As you walk towards the castle itself you are greeted with the old castle walls as well as some of the fields that are in the surrounding areas.  If you are looking at the map on the official site, you need a little creative imagining as the map uses an image of what the castle used to look like and not what it looks like today.  Some of the walls are probably not there anymore but you can easily get a good idea of what was around. 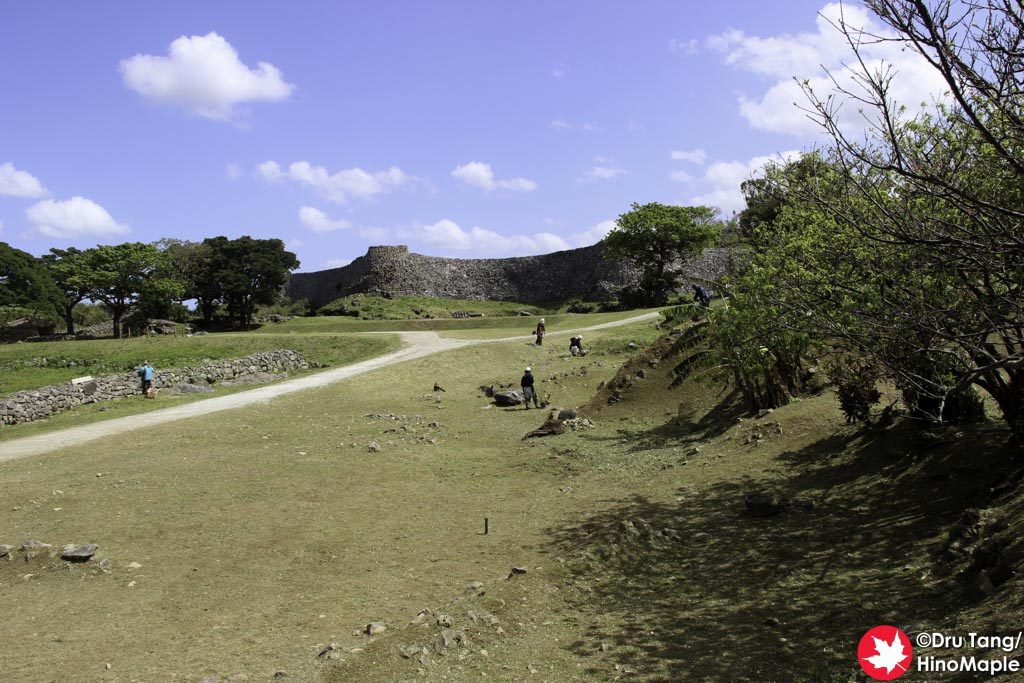 I am unsure of exactly where you start but I would assume that you will be in the outer ward.  The outer ward today is a beautiful looking park that would be lovely to just spend an afternoon for a picnic.  I’m not sure if you are allowed to eat there or not, but I was not allowed to enter as they were cutting the grass at that time.  The people tending to the grass were looking a little annoyed at me for coming up to the area as if I was an errant tourist, but I kept out. 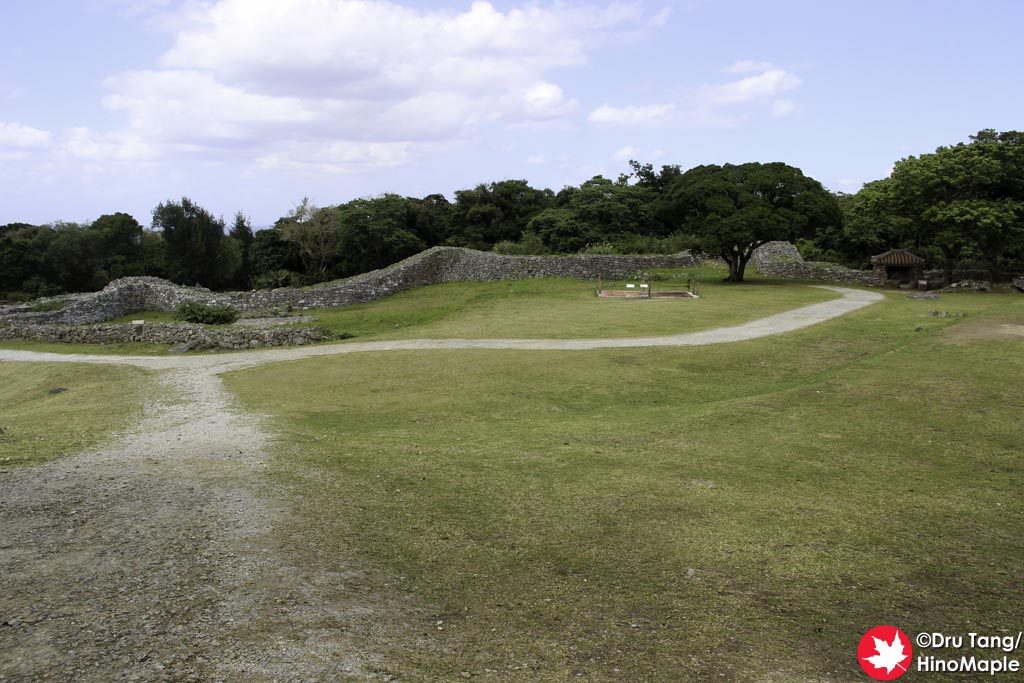 The Heirojo Gate is the main entrance to the castle, and rightfully so.  There is a small ticket window where they check your tickets and the gate itself is pretty remarkable.  It is very unique compared to other castles that have wooden gates.  This was made of hundreds of stones with a wood door connected to it.  Most other castles have shaped stones with a wooden gate. 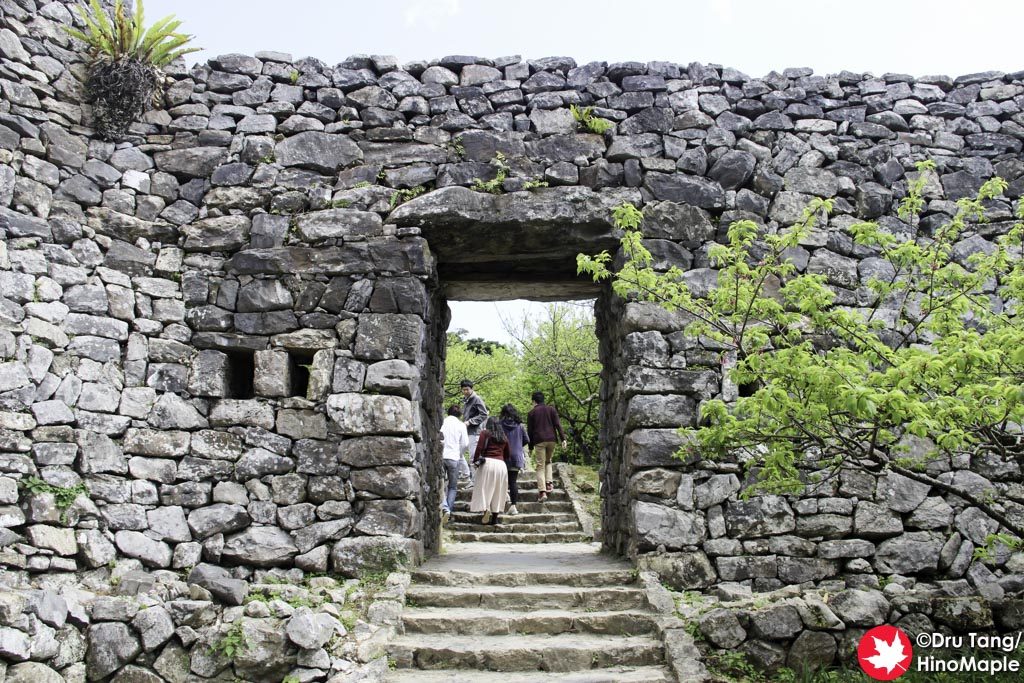 Once you pass the gate you are on the main approach to the castle keep area.  It is basically a path to get to the Umiya Court.  There are actually two paths to get to the Umiya Court and almost everyone will take the main path that goes directly up.  It was built to make access easier and it is a beautiful path during the cherry blossom season, mid-January to mid-February.  The entire path is lined with cherry trees but we were too late and the cherry trees already had lush green leaves on them.  There is an alternative old path that winds its way up along a rocky trail that is more interesting and challenging but not that special. 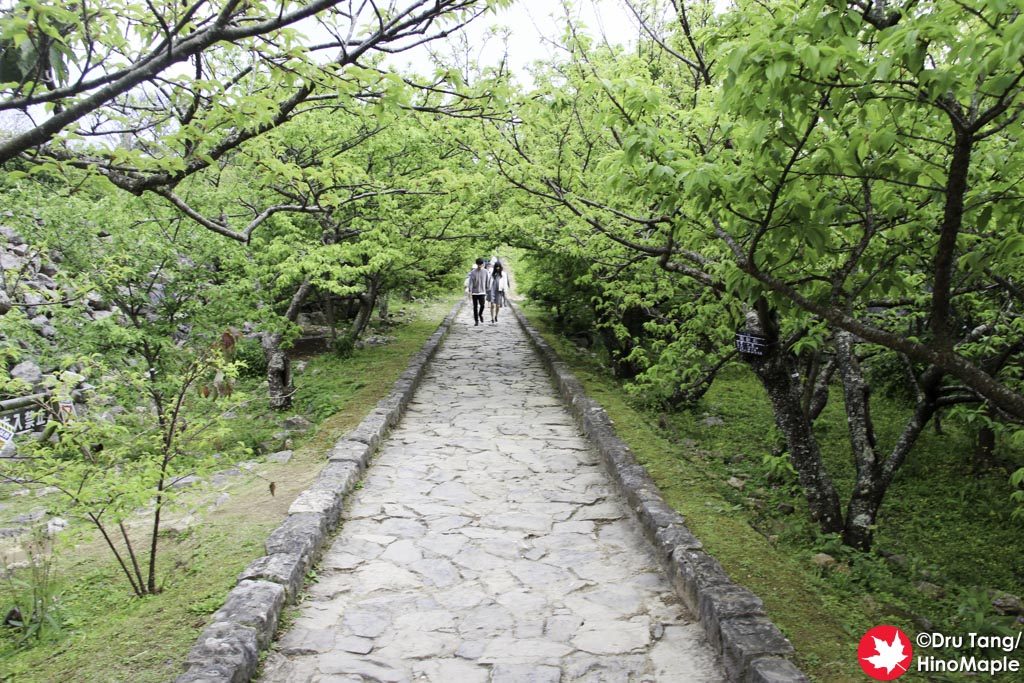 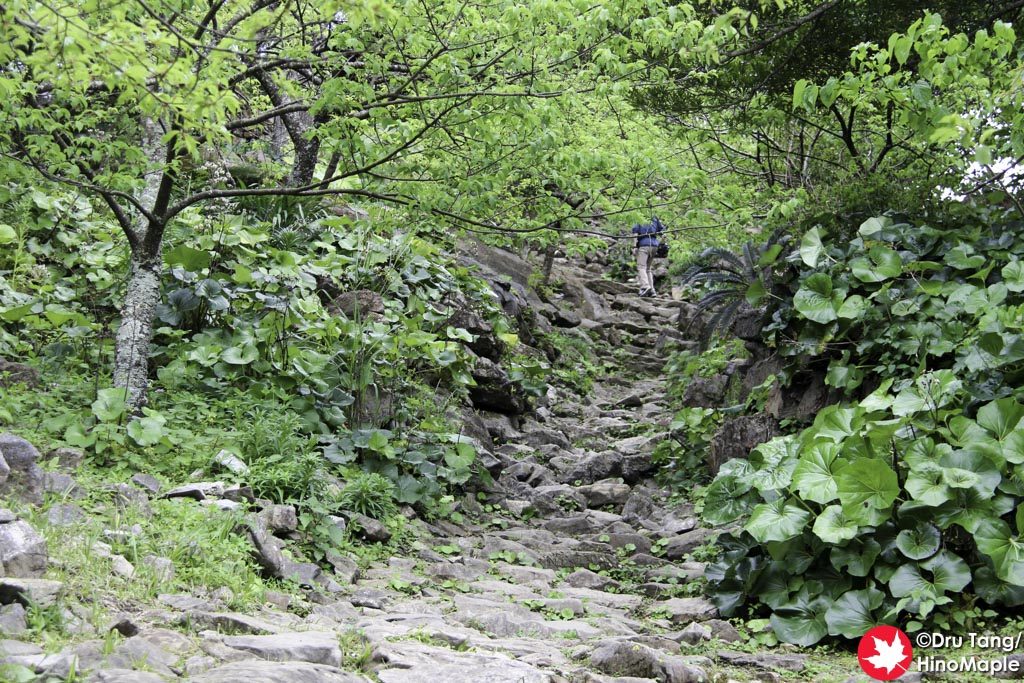 As you head up the main approach you suddenly smell the scent of sake, Nihonshu.  The smell is pretty strong and you will smell it in a couple of areas of the castle.  At the top of the approach you enter the Umiya Court which is a nice area with a lot of foliage that must be groomed a lot to prevent it from taking over the entire area.  There is a small outcrop of rocks on the left next to a monument.  This outcrop of rocks is actually a place of worship.  The smell of sake actually comes from this point where people pour sake onto the rocks as an offering to the gods.  Rather than opening a cup or bottle of sake and leaving it for them, they actually pour it onto the rocks. 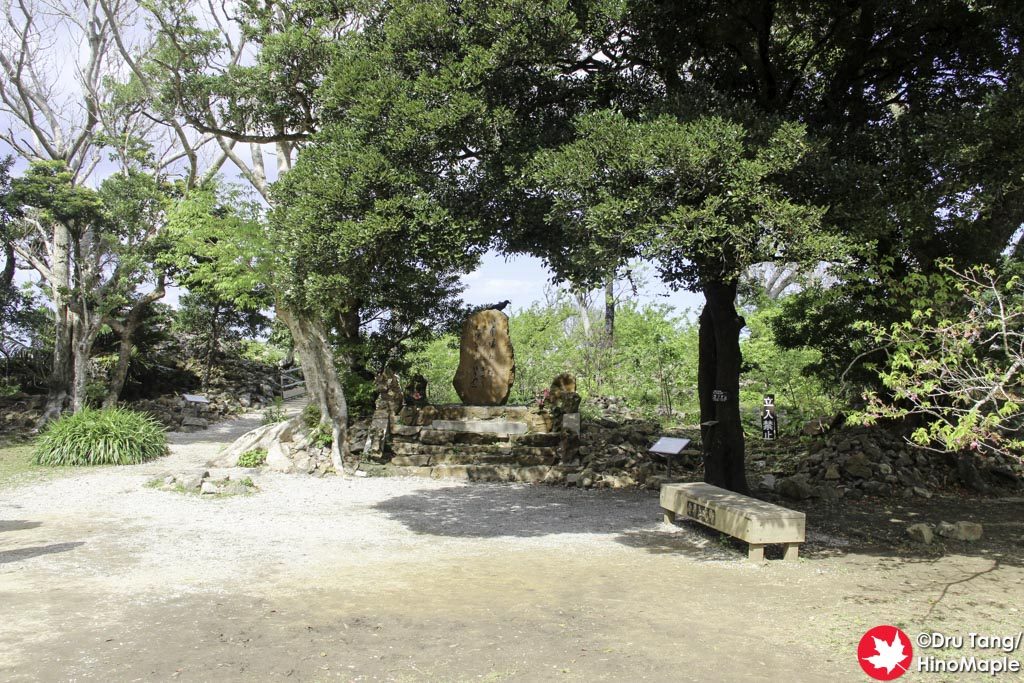 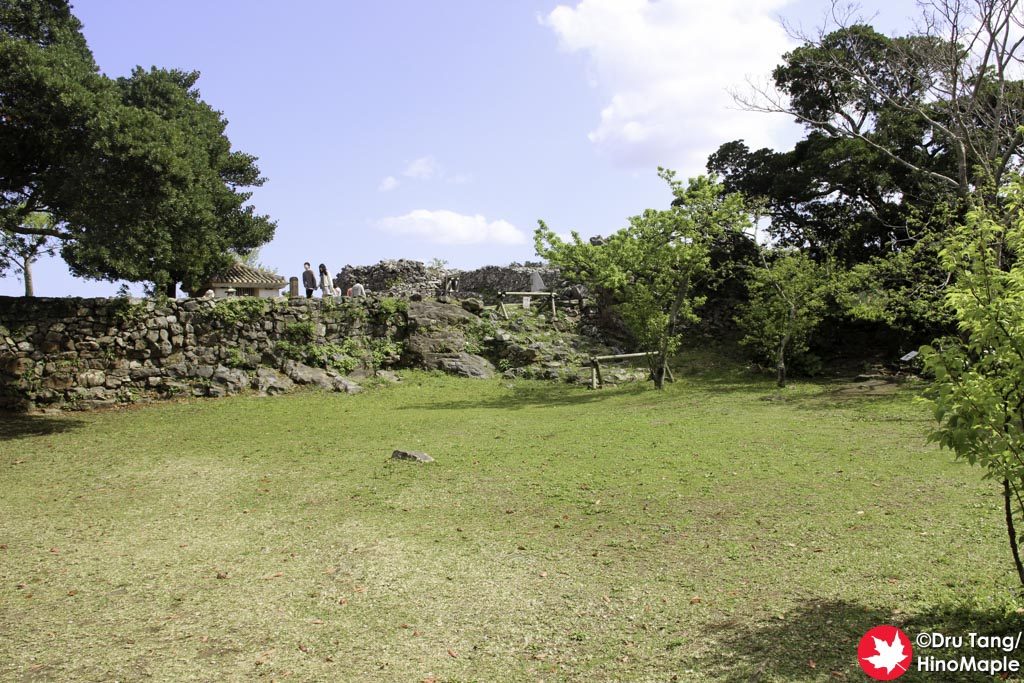 The next area you are supposed to visit is the Uchibaru Ground.  This is probably the best place to enjoy views of the surrounding sea.  From here you can get great views of the sea to the north of the castle.  You should just relax and enjoy the time here but with my tour, I sped through it and I regret not returning to enjoy the grounds a lot more.  Other than the view there really isn’t too much here, but it is a holy area of the castle. 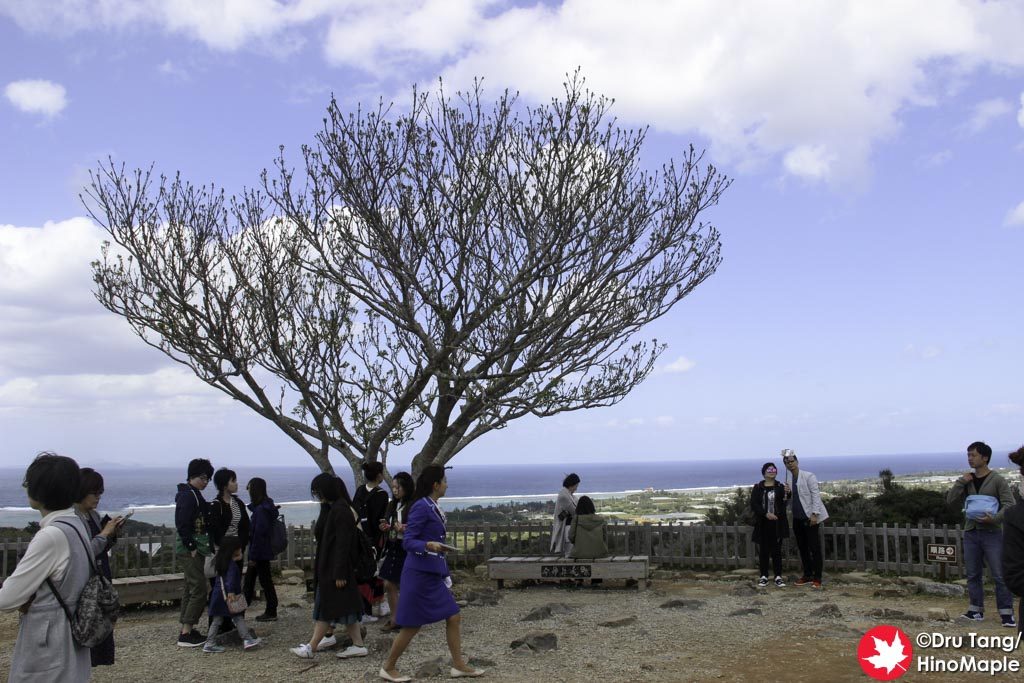 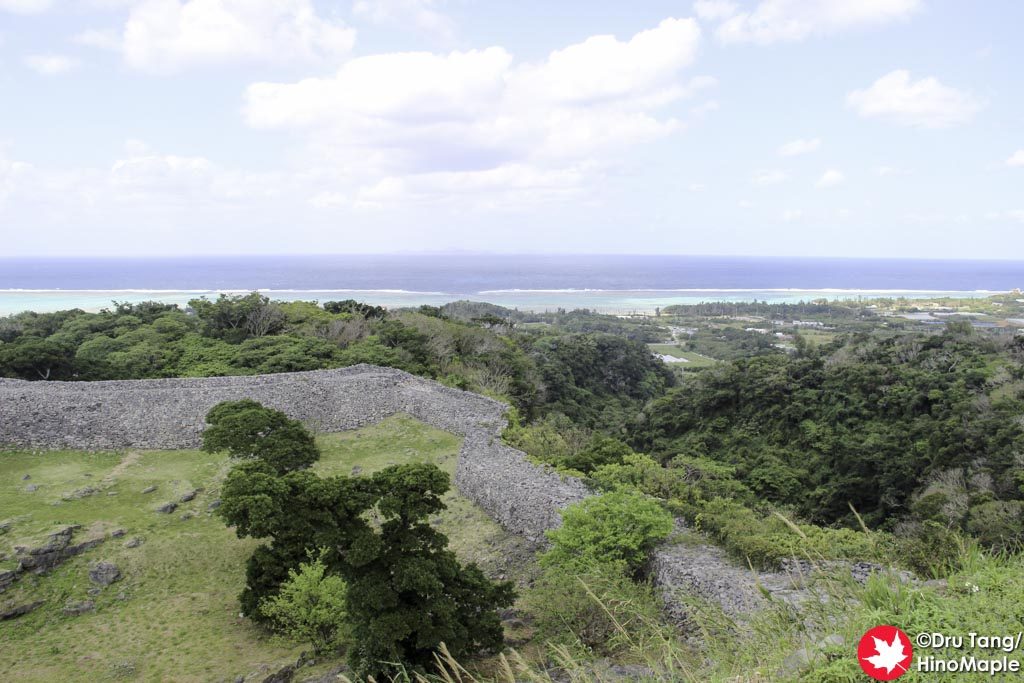 View from the Uchibaru Ground

The Main Ward, or Honmaru for regular Japanese castles, is a nice area as well.  You get better views of the surrounding castle walls and you can learn a little about the history of this area.  The main focal point of this area is a small white shack that is actually a shrine to the fire gods, I believe.  The shrine is closed but you can get to the door and look inside and smell the sake.  The sake here is also poured onto the floor as an offering to the gods.  The trees in this area are also more majestic than the other areas and this is probably due the fact that there are fewer trees overall letting them stand-out a lot more. 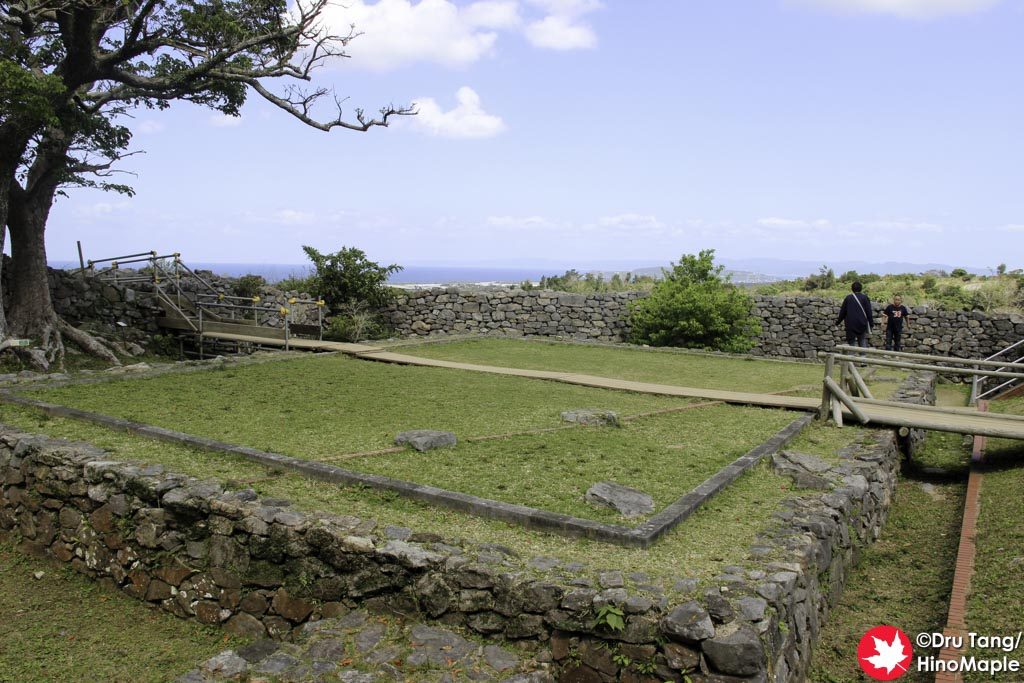 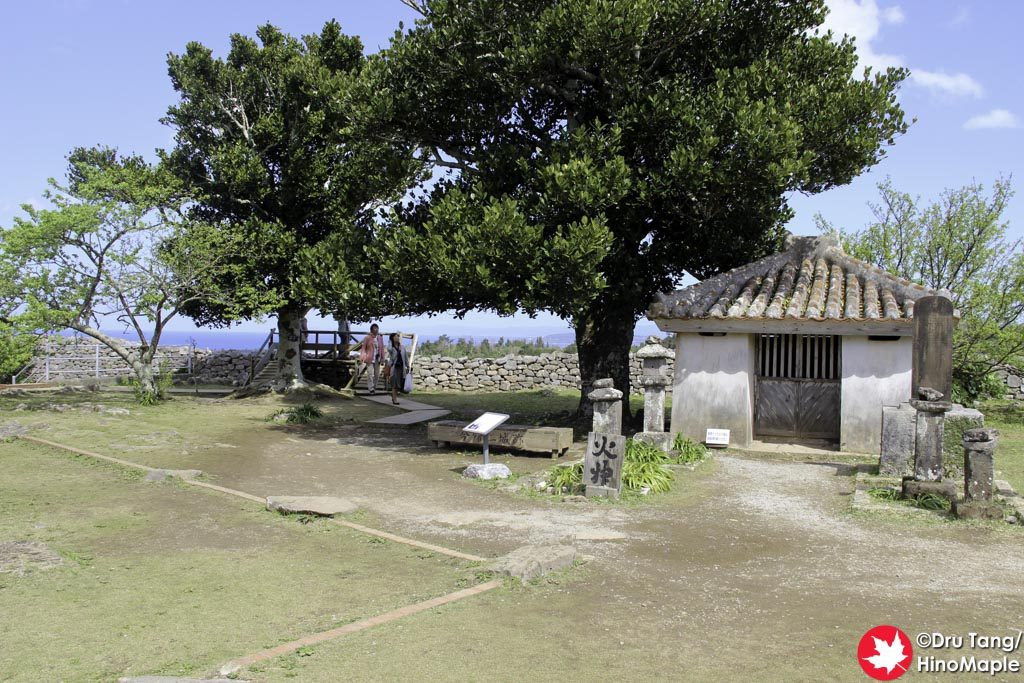 Shrine to the Fire Gods in the Main Ward

After the Main Ward, the tour left for the Nakijin Village History and Culture Center but I had the option to stay behind to enjoy the castle even more and explore the Shijimajokaku Ward.  I was interested in the culture centre but was not interested in it enough as I wanted to go and look around and take more photos.  I headed to the Shijimajokaku Ward which was the residence of the king’s most important subjects.  It is a really nice open space but might be a little dangerous to visit in the rain as the ramp to go down may be slippery.  The openness of the ward is beautiful and you can only imagine what life was like in its original form. 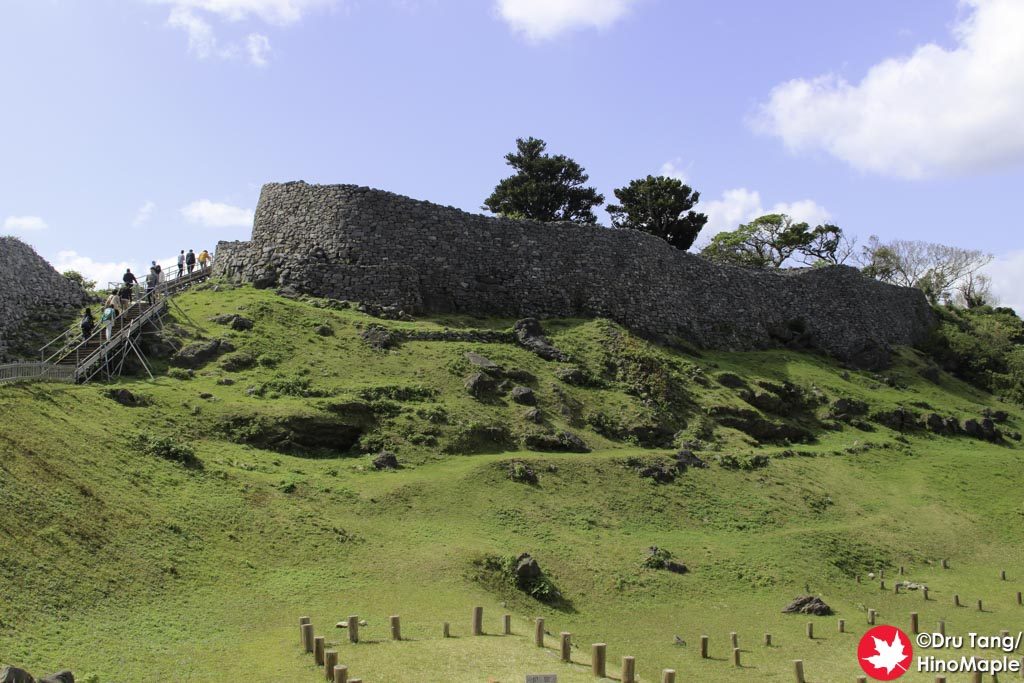 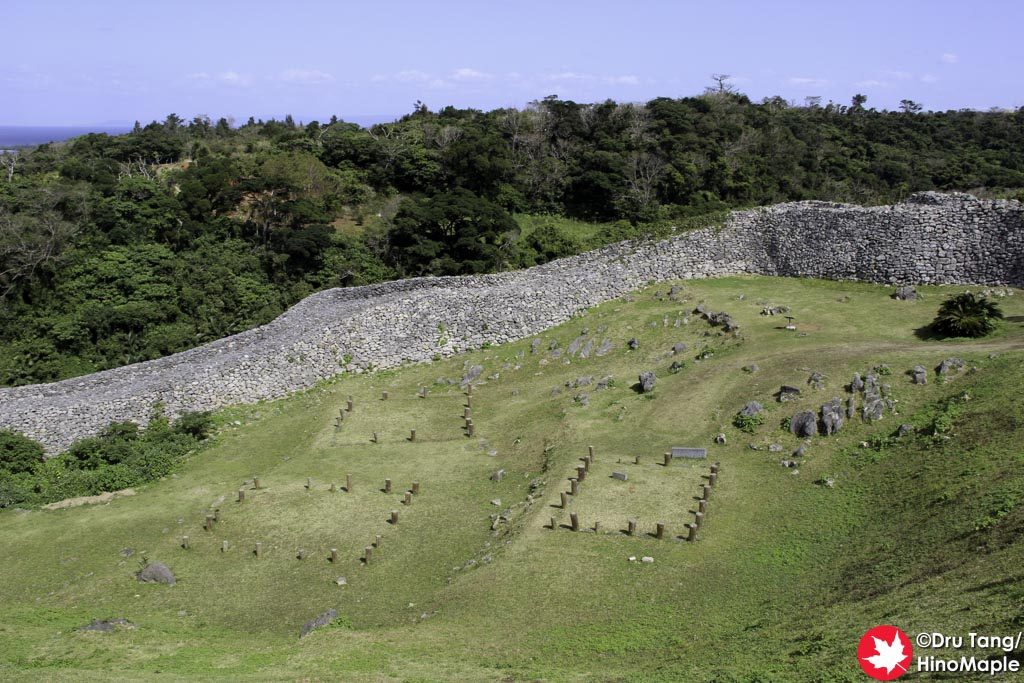 Looking Down on the Shijimajokaku Ward from the Main Ward

Nakijin Castle was a wonderful place to visit.  If I was driving to that area I would happily visit this castle again.  I wouldn’t mind a bit more freedom but it was a delicate balance for the tour.  If you are not interested in castles this may not be worth a visit but the views from the top are definitely worth it for me. 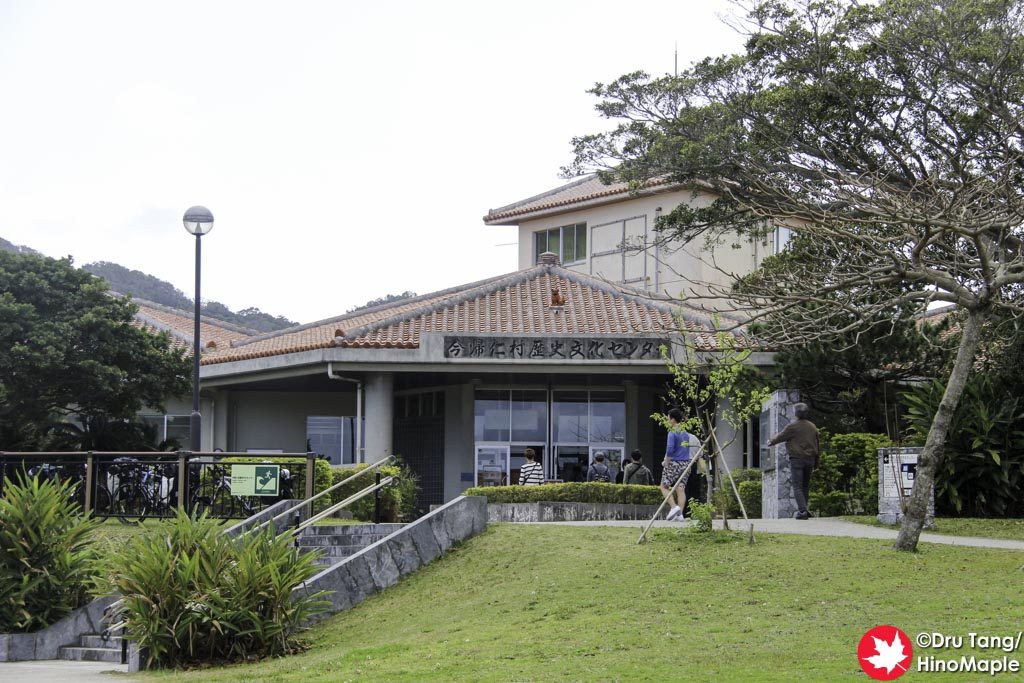