Shikoku Mura, aka Shikoku Village, is a touristy place in Takamatsu where you can learn a lot about the historical architecture of Shikoku, and of course Japan as well.  Shikoku Mura is a collection of old buildings that have been moved to the area allowing you to get a feel of how things have changed from the olden days to the modern era.  It is worth a visit but not everyone will care for it. 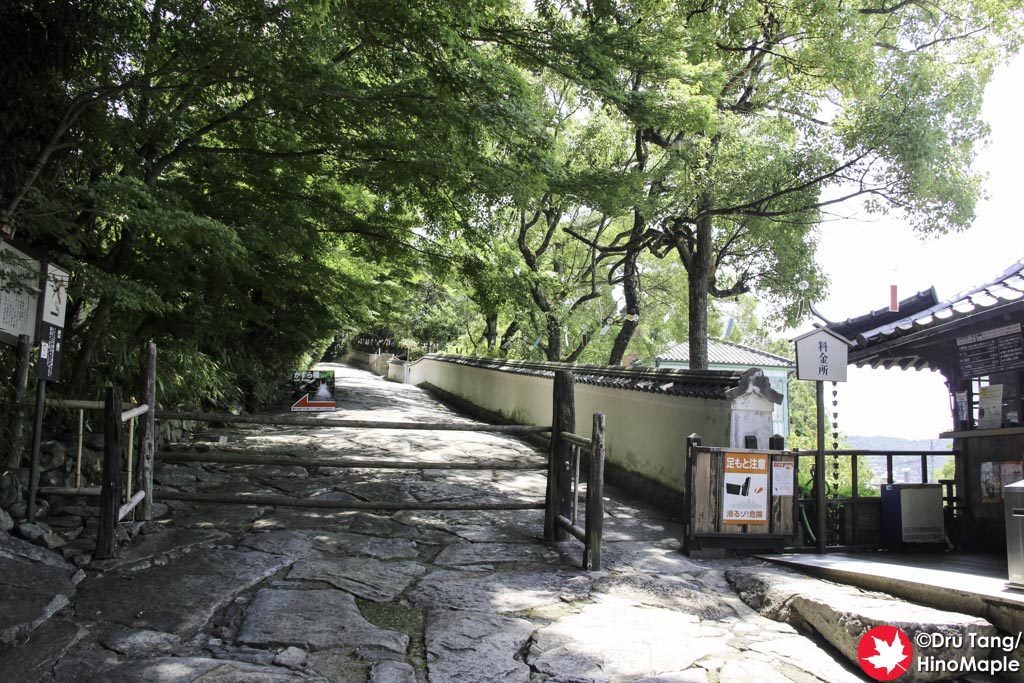 It isn’t difficult to get to Shikoku Mura.  You have to take the Kotoden Shido Line to Kotoden Yashima Station.  It is a short walk up a hill to get to the main entrance of Shikoku Mura.  It is also at the main entrance to Yashima Temple, but you do have to walk all the way to the top of the mountain to get to the main part of the temple.  It costs 1000 yen to enter and it is definitely worth the admission as you get to see a lot of old buildings and the walk through the woods is amazing. 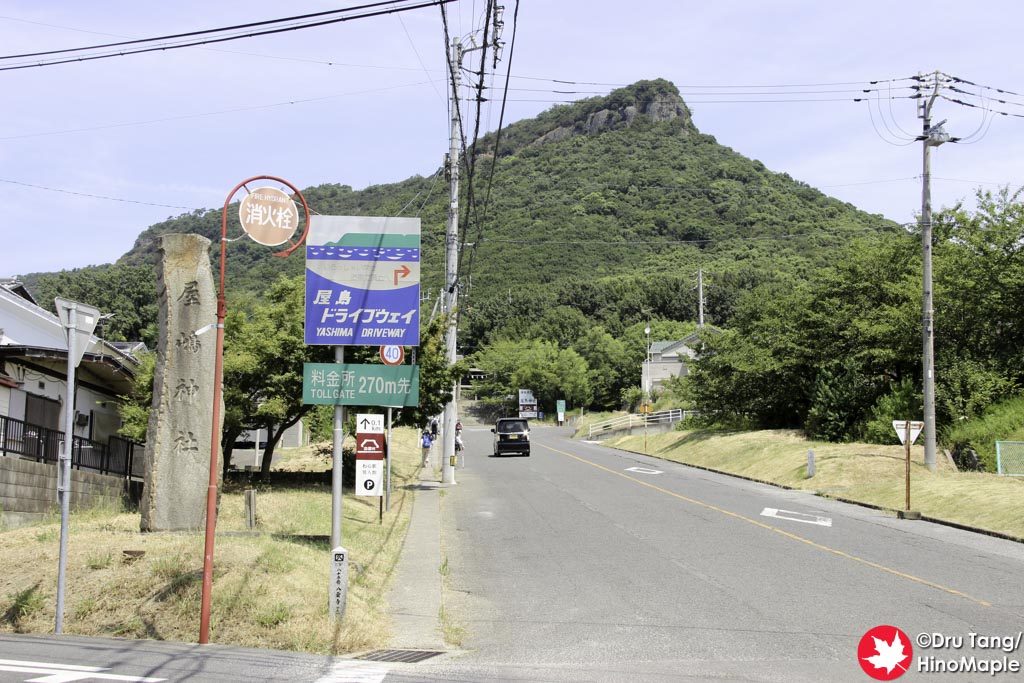 Once you enter, you are given the choice of two entrances.  The first entrance is a lot of fun as it is a replica of some of the vine bridges you will see in the Iya Valley.  I had never been to that region and had been dreaming of visiting but I was happy to see an example of the bridge and I was allowed to walk across it too.  Since Shikoku Mura is not a very popular tourist attraction, it isn’t hard to get the bridge all to yourself.  I would caution that if you are afraid of suspension bridges, you may want to avoid this one as it can be “dangerous”.  If you are not comfortable crossing this bridge, the second entrance is a bypass around the pond that the bridge crosses. 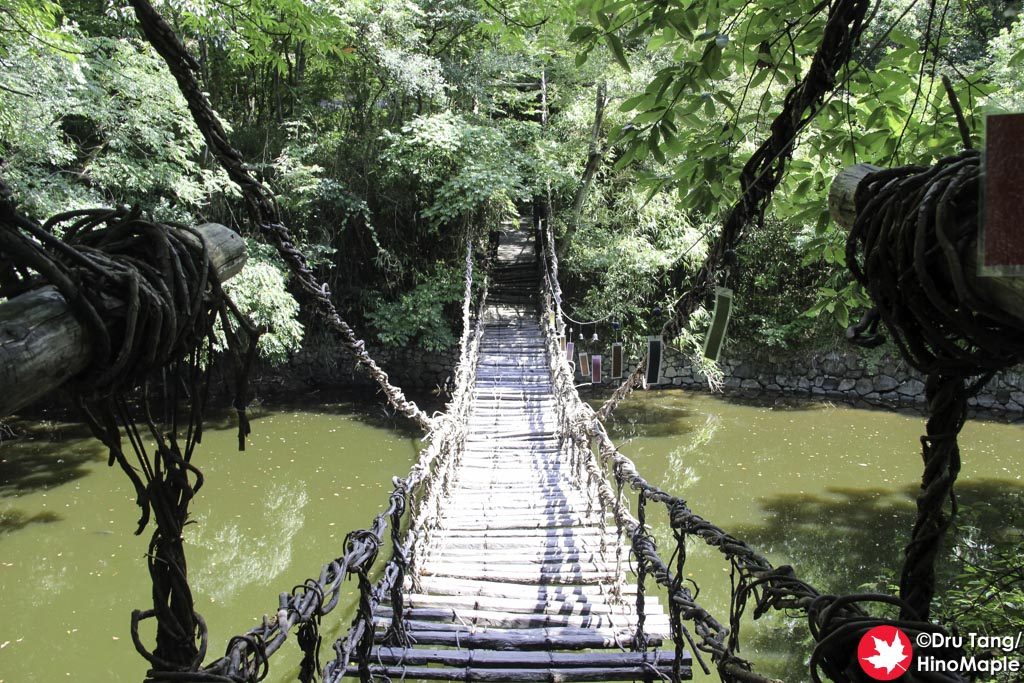 After crossing the bridge, you head up to an old kabuki theatre.  It was originally on Shodoshima and they moved it to Takamatsu and built the seating area.  You can spend a few minutes just enjoying the design, and they sometimes add a little “something” to the stage.  When I visited in the summer, they had nice glass wind chimes along the stage which made a very peaceful sound. 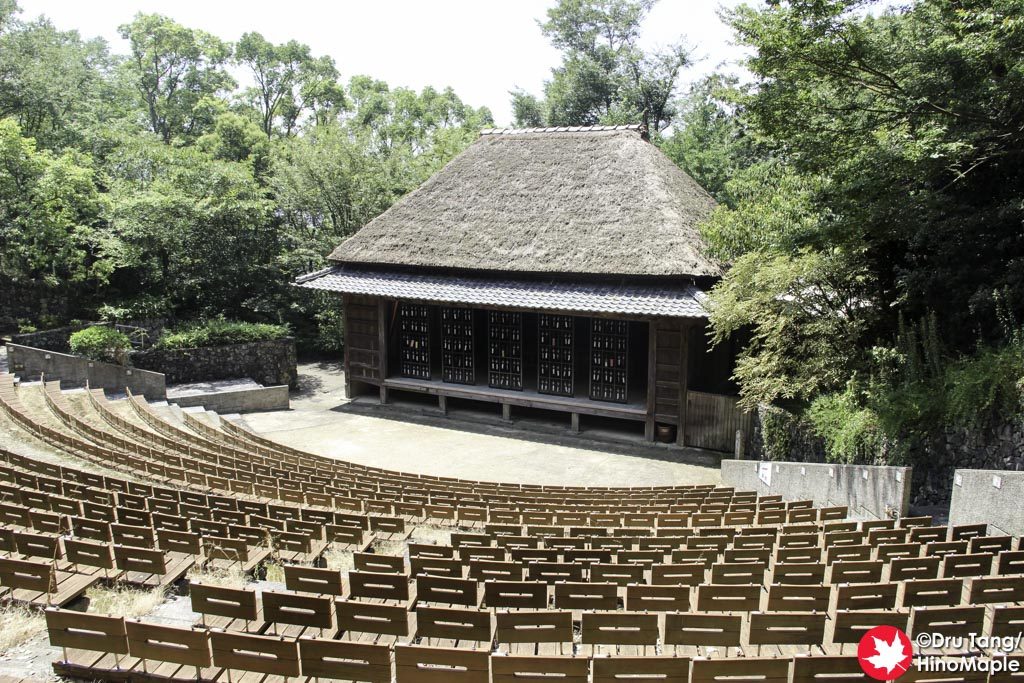 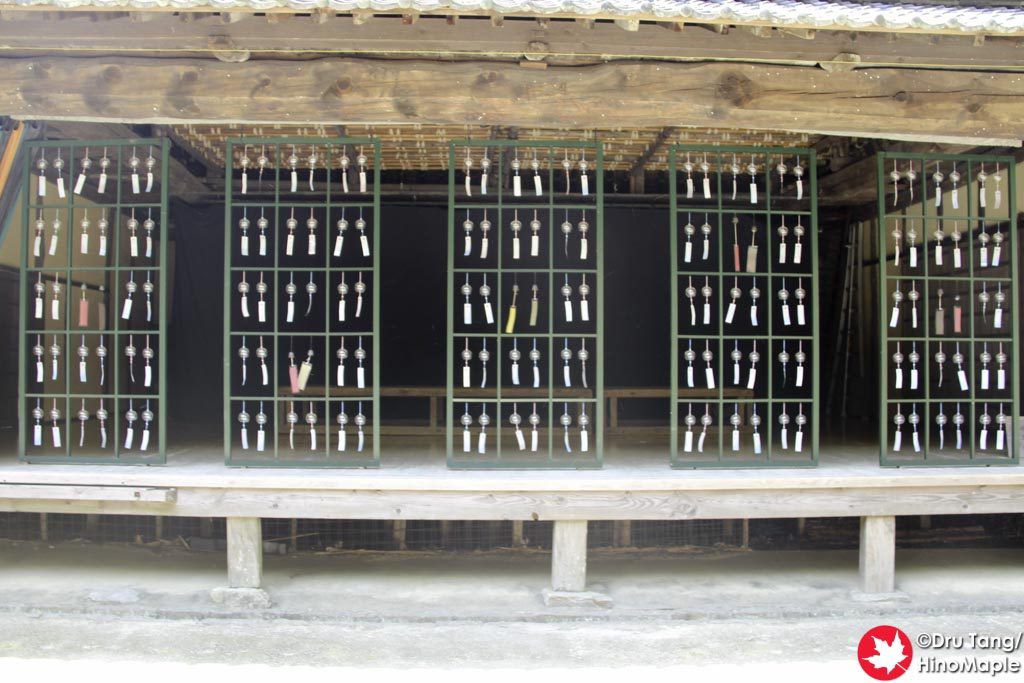 If you follow the main route, you will see a couple of old houses before you see the sugar factory, a soy sauce factory, and a paper making factory.  All of them are pretty small making them less of a factory and more of a house.  Many of these little places could be considered craft as they don’t make big batches of anything.  It is really interesting to see how things were produced such a long time ago. 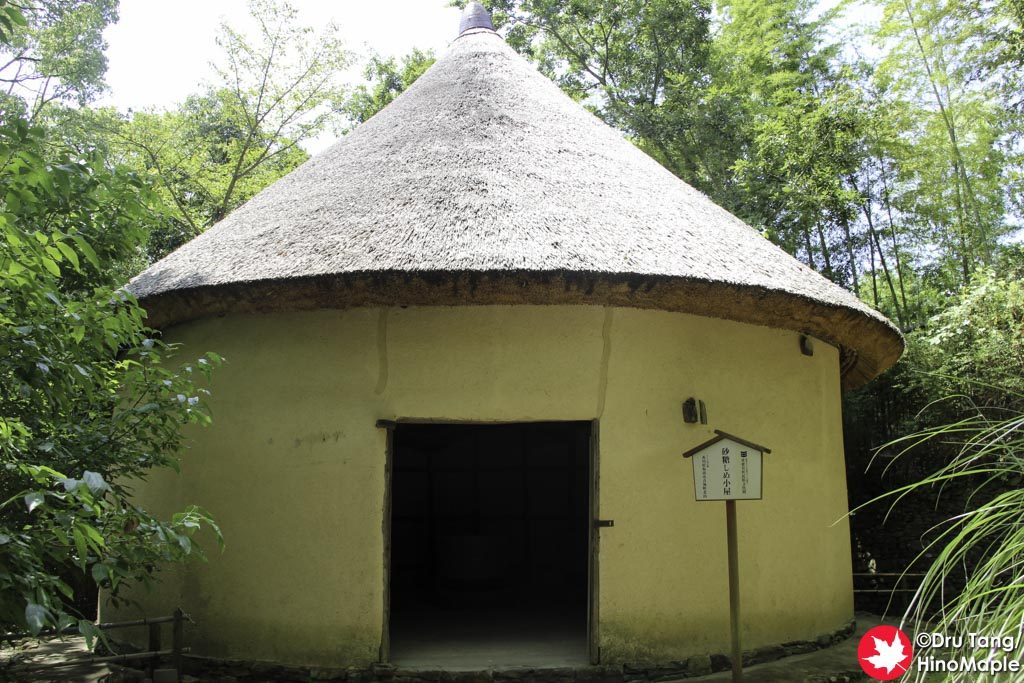 After visiting the factory area, you will head up towards the Shikoku Mura Gallery.  This is a very interesting art gallery that really seems out of place with what is in the area.  I would call it a modern interpretation of what Japanese architecture has become.  The gallery was opened in 2002 and it was designed by Tadao Ando.  The look of the building is typically Ando and the art inside changes.  When I visited they had a lot of Iranian figures and pottery which was really interesting.  The back of the building has a very beautiful waterfall section where you start at the top and work your way down.  It is fun to look around and just enjoy the sounds of the water falling down the reliefs.  There was also another section behind the waterfall but I thought it was an exit as you have to pass the gallery and head upstairs to get to it.  It was actually a room next to the entrance that is blocked to the public unless you enter from the waterfall area.  The gallery is really nice and I did enjoy it but it felt out of place with the old architecture in the rest of the village. 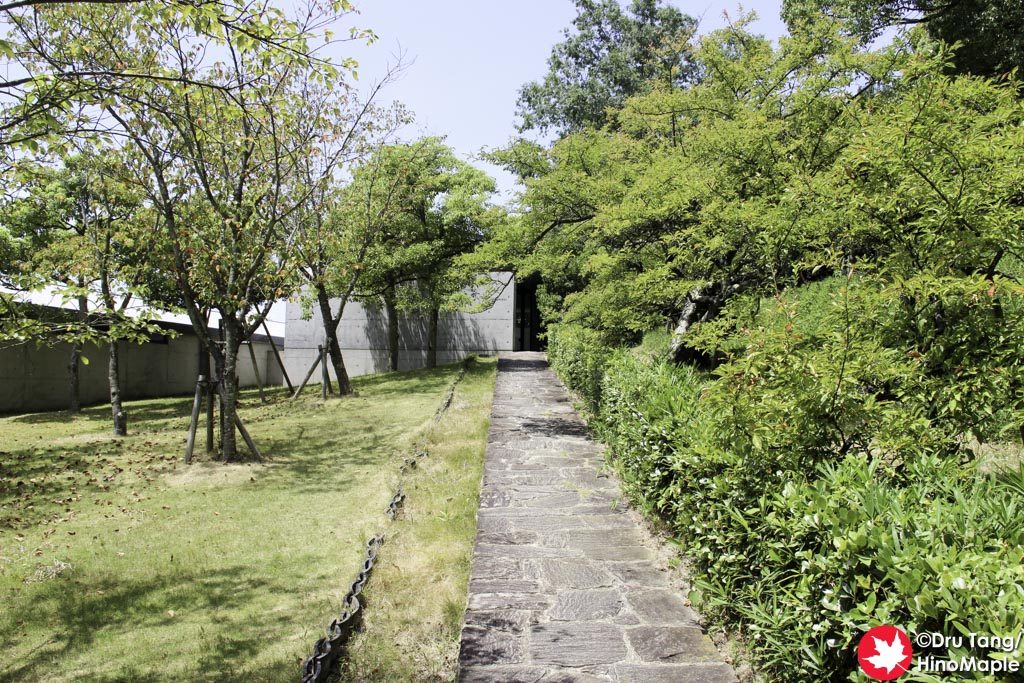 At the top of the village are the lighthouse buildings.  They moved a stone lighthouse that was featured in a Japanese movie as well as 3 buildings that were used as residences for the lighthouse keepers.  They are designed to show you how they developed and changed over time from the western style to a mixed Japanese-western and a more Japanese styled house.  It was really fun to walk around the hallways of the small houses and imagine what life would be like but it was probably pretty boring unless you had other things to work on. 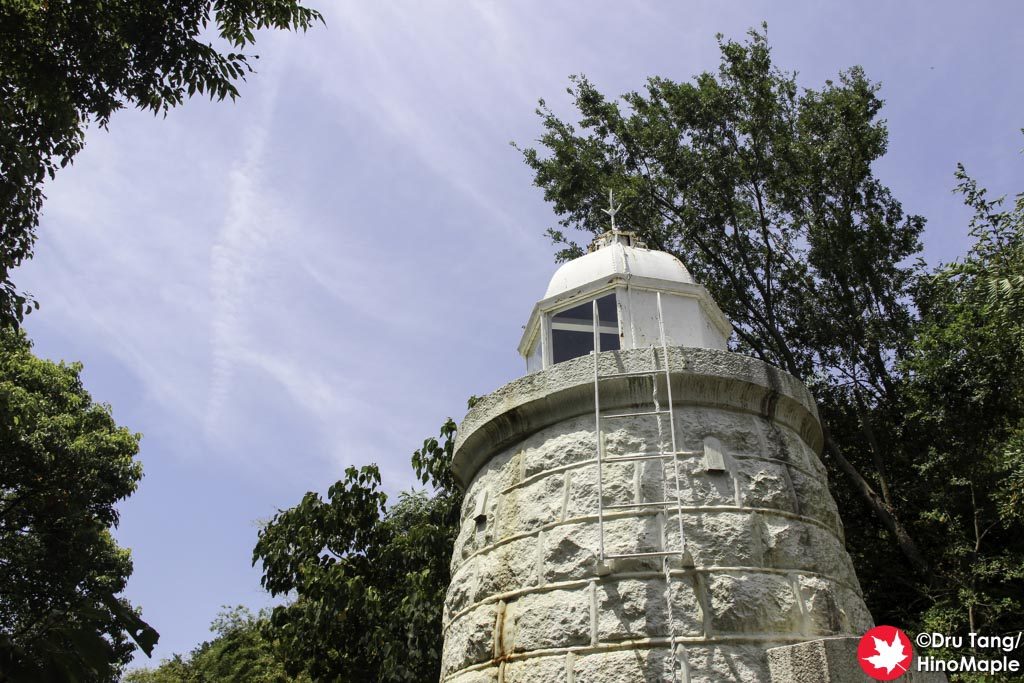 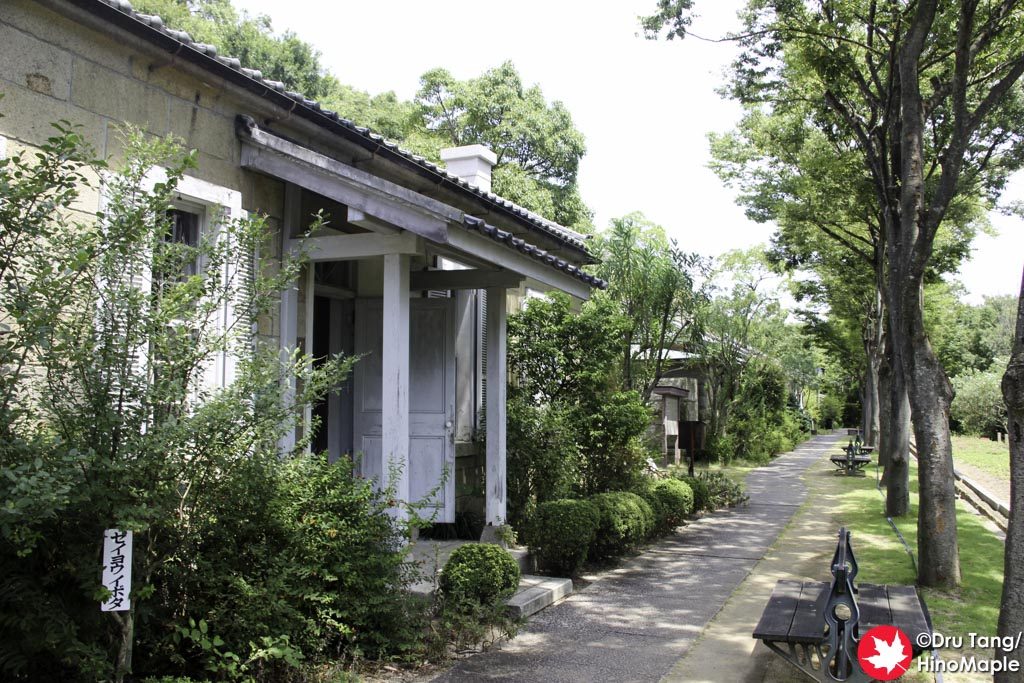 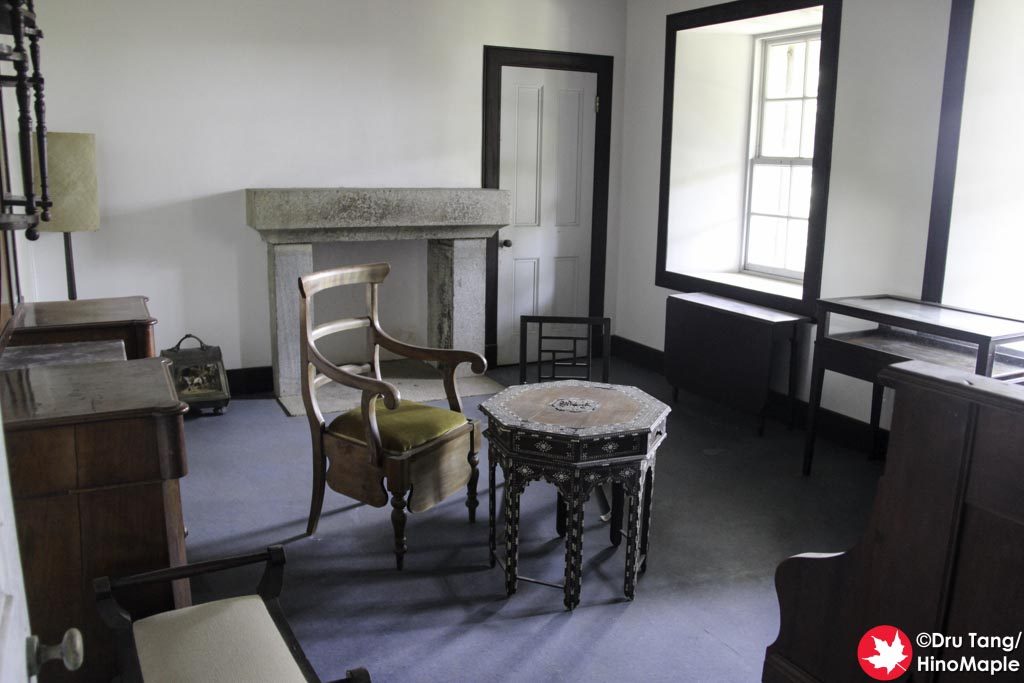 Inside the Lightkeeper’s House

As you make your way down the hill to the entrance, there are many other homes and buildings to see.  I wasn’t really interested in a lot of what I saw, but that was partly due to the heat.  I was struggling to keep going as it was a very hot summer’s day and while Shikoku Mura has a lot of trees it was still very humid making it a challenge to focus on the next section of the village.  There was a beautiful stone waterfall section around the homes that was well designed and reminded me of the Shikoku Mura Gallery but on a grander and more natural scale.  It was all man made but the design was really nice. 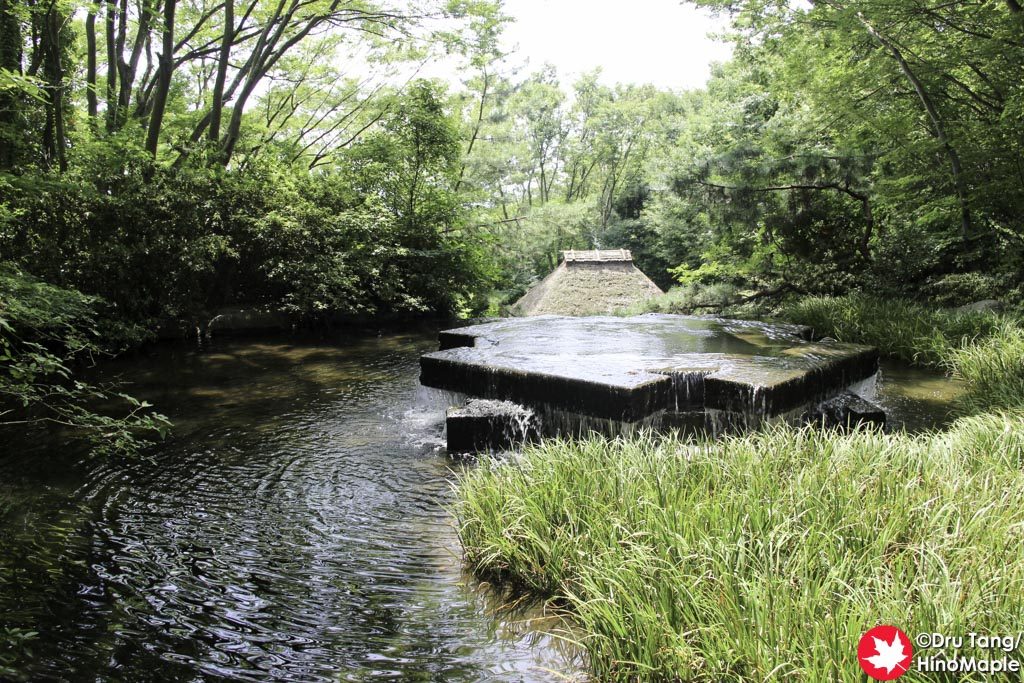 Top of the Waterfall 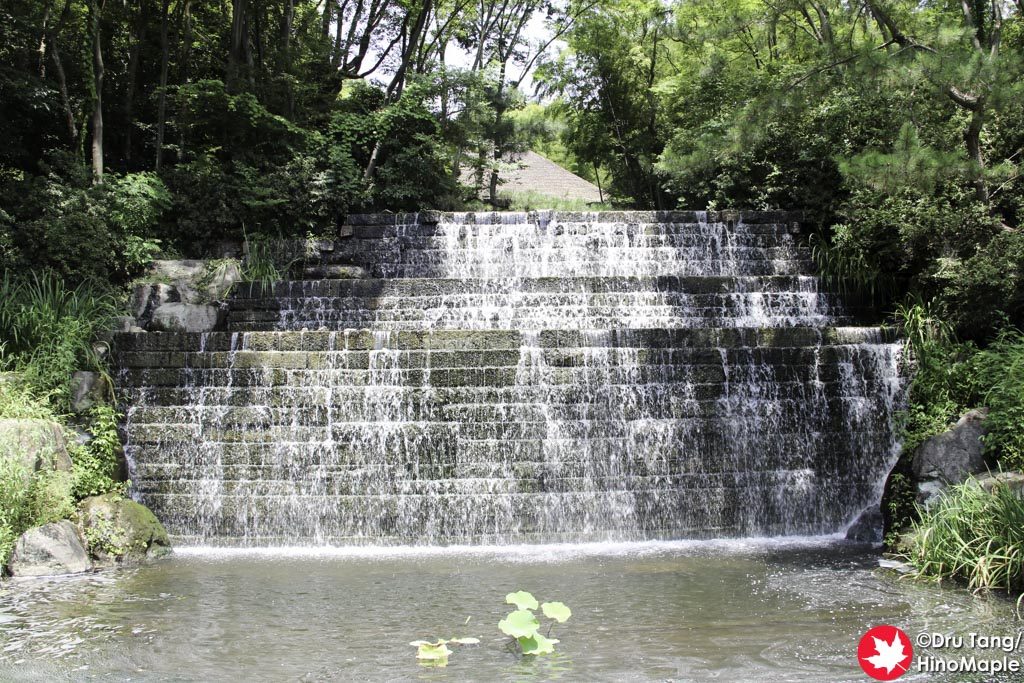 I then headed to a nice old stone bridge, but was confused when they asked me to do a loop around it by first going over and then under the bridge, but I understood why when I finished.  The bridge itself may seem a little strange but the design is pretty unique for Japan as I had never really seen anything like it, although I have seen similar things. 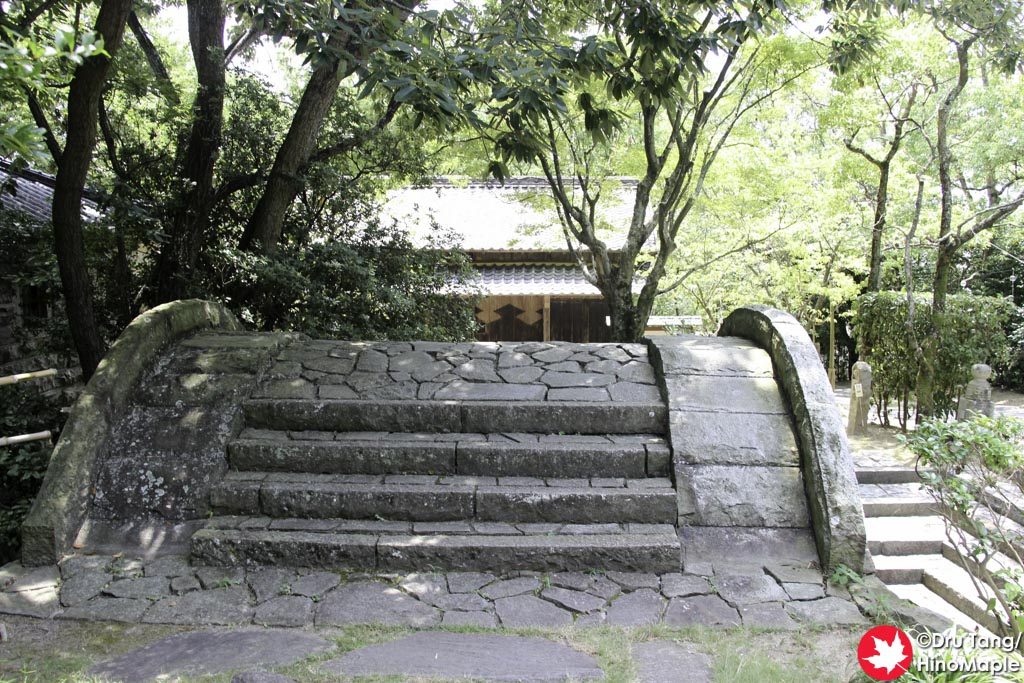 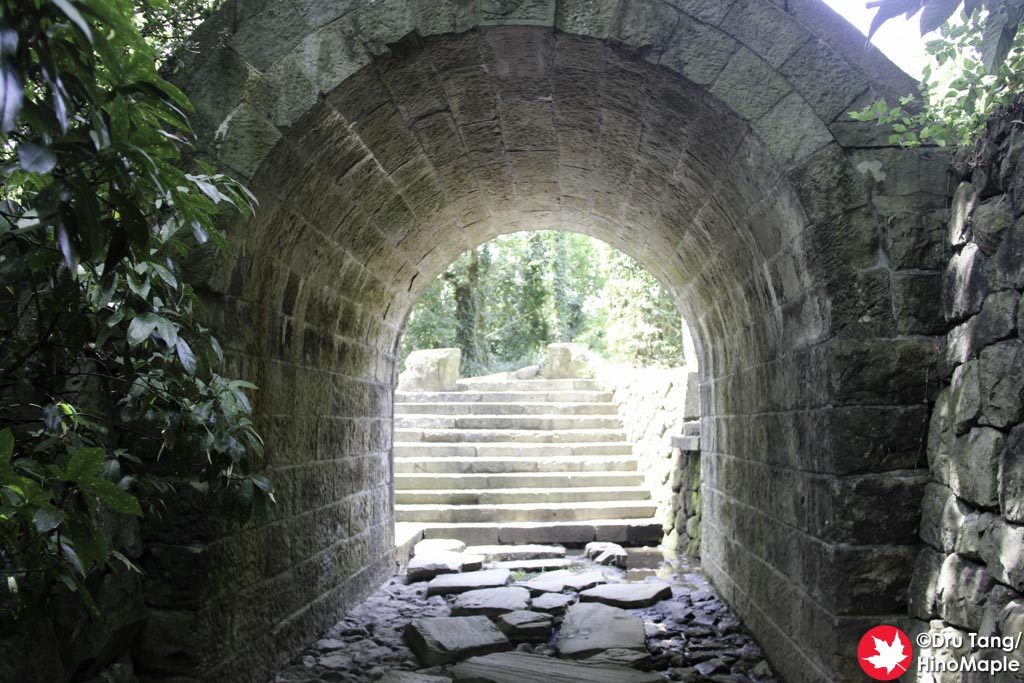 Under the Stone Bridge

After the stone bridge, you will come to an old soy sauce factory.  It is a nice big area and a good place to take a short rest.  While I wasn’t really impressed after visiting Shodoshima’s soy sauce factory area, I was interested in how things were done in the past.  After short visit here, I headed towards the exit. 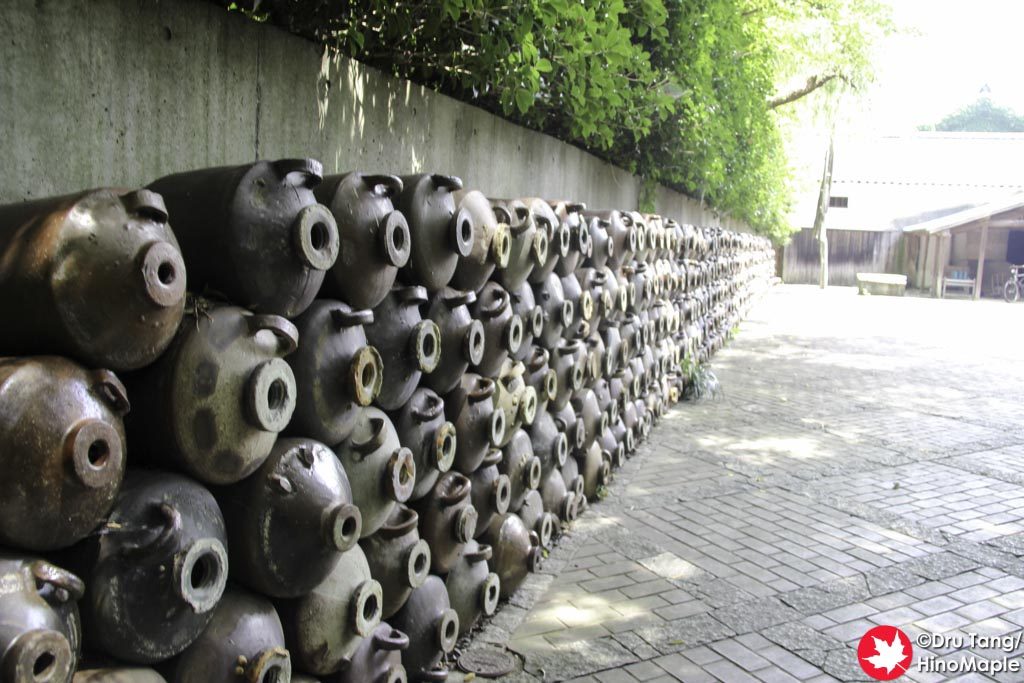 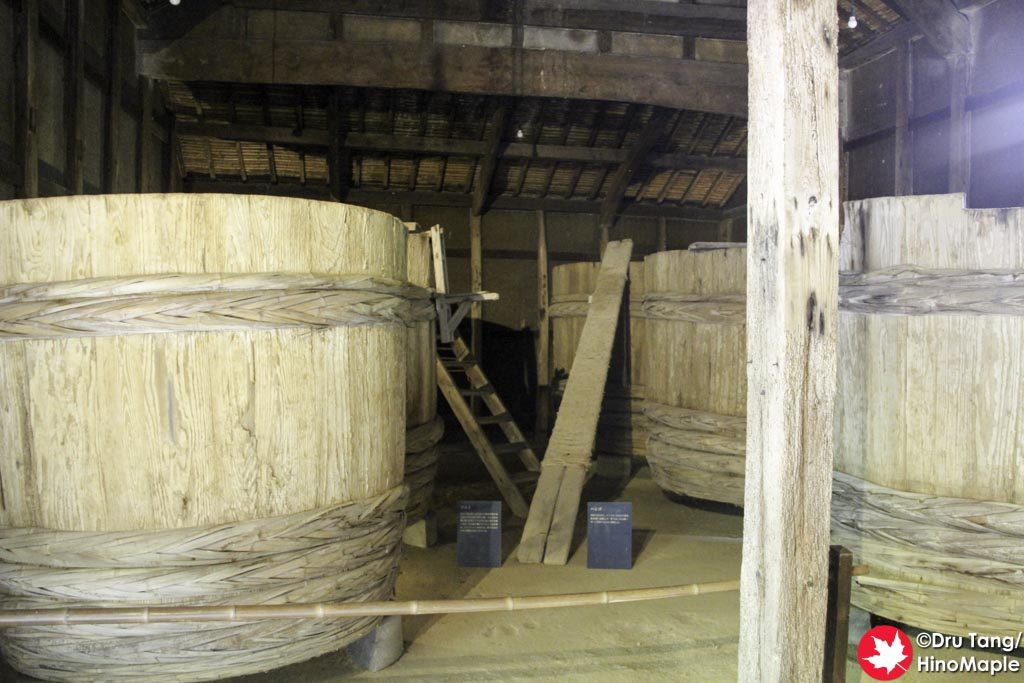 Inside the Soy Sauce Factory

At the exit, you can see one of the old checkpoints in Shikoku.  In the past, when Japan was still a warring nation, there were checkpoints to check official documents; basically an old style of passport that was limited to within Japan.  It was a simple old building for the guards and I’m sure it was important at the time. 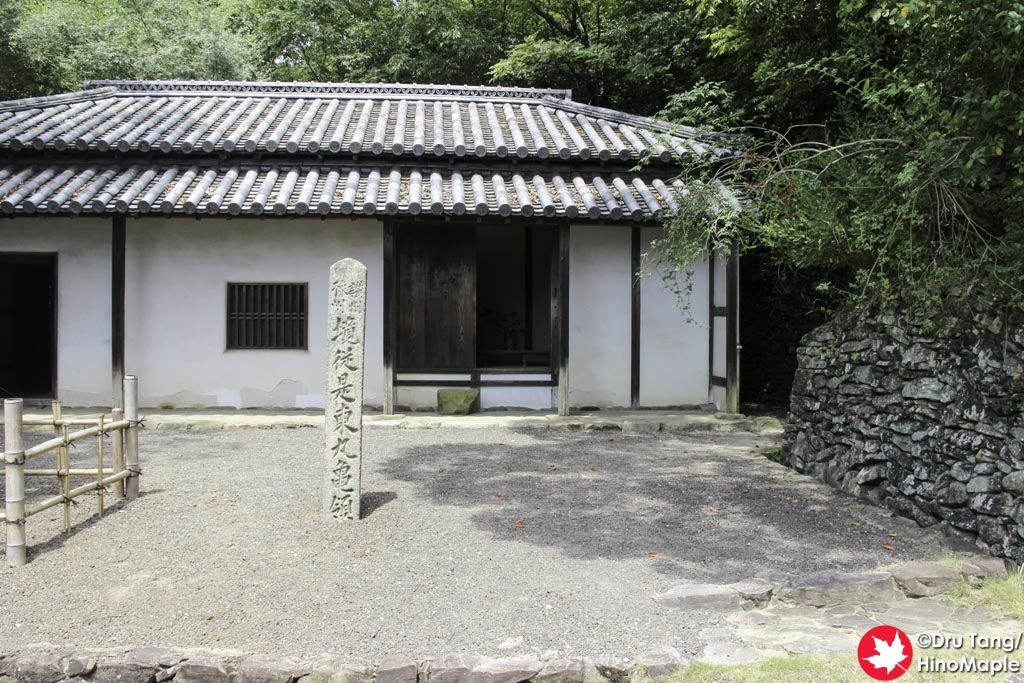 Once you exit the paid area, there are still 2 final buildings to check out.  As you exit, you will be next to an old European style building.  It is just a regular tea room but I skipped it as I was hungry and wanted lunch.  You can then walk across the parking lot and check out a small souvenir shop.  Down a small path from the souvenir shop is a popular udon restaurant called Waraya that had a very long line.  It appears to be pretty famous but I couldn’t get much information on its history.  It is probably very good but not worth it for me to wait in line for it. 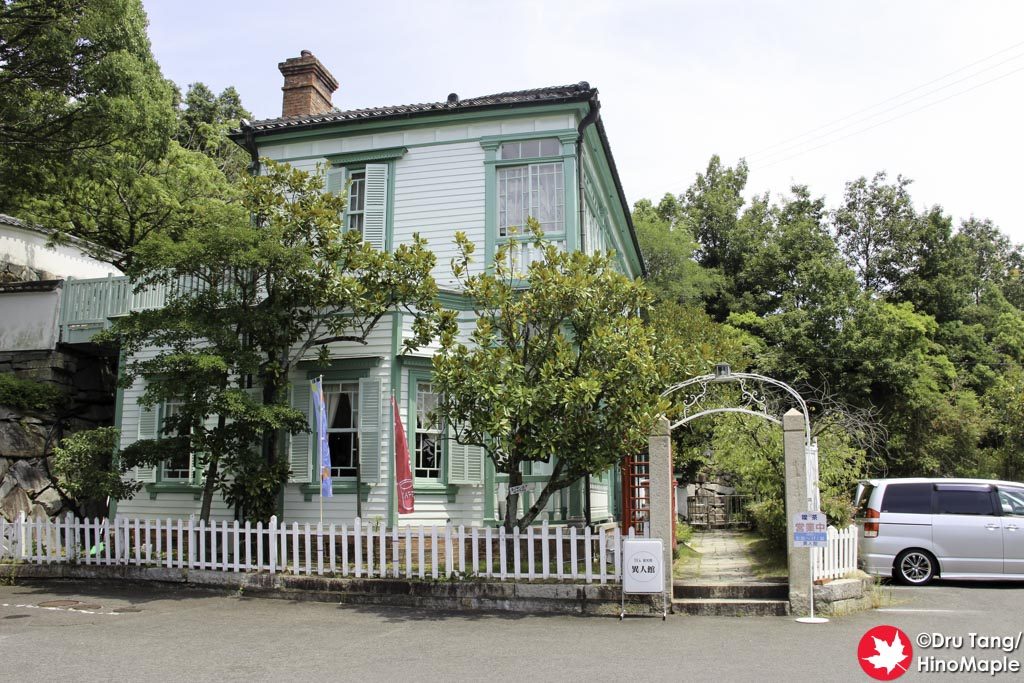 Shikoku Mura took a lot longer to visit that I expected.  I would estimate that it will take you a good hour to see everything, and maybe a bit longer if you don’t want to rush.  I am happy that I could visit the village but I doubt I will go back again.  Yashima may be calling me again in the future but not Shikoku Mura.