In June, 2016, I was watching a Japanese program and a woman was exuding the virtues of visiting Haneda Airport as a tourist destination.  While I generally don’t go to airports except when I am leaving the city, I decided to make a day trip and visit Haneda’s domestic terminals to see if it was really a good place to visit. 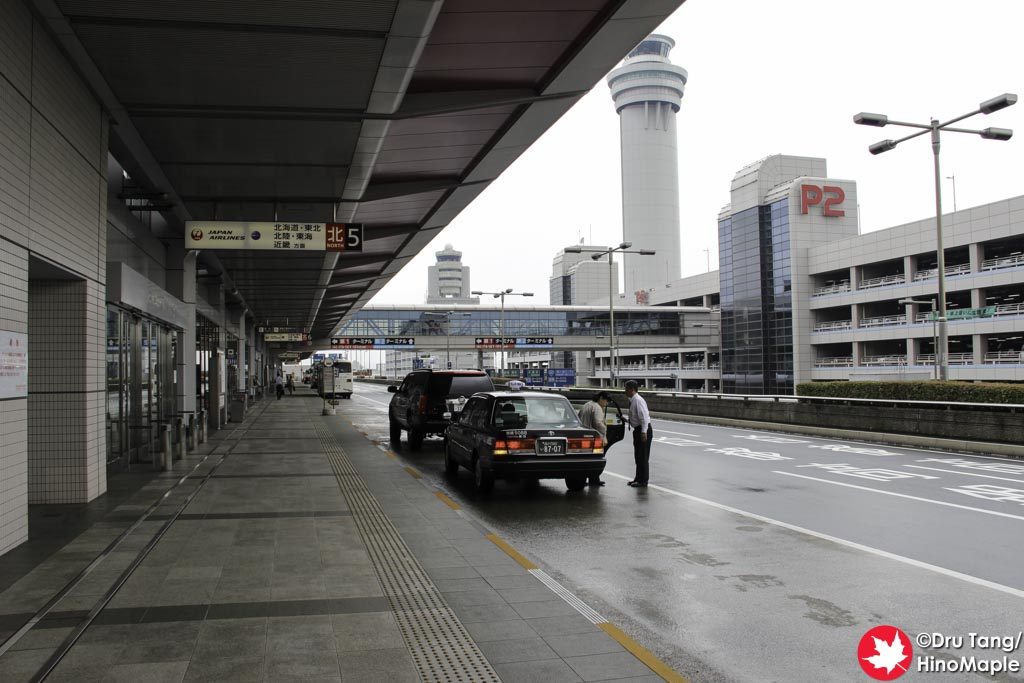 Getting to Haneda is a lot easier than when I first came to Japan.  The trains going to Haneda used to be complicated if you took the Keikyu lines.  In the past there were few direct trains departing from Shinagawa Station to Haneda Airport.  Today, almost all trains that go to Haneda go through Shinagawa and at least once an hour a train goes from Narita to Haneda. 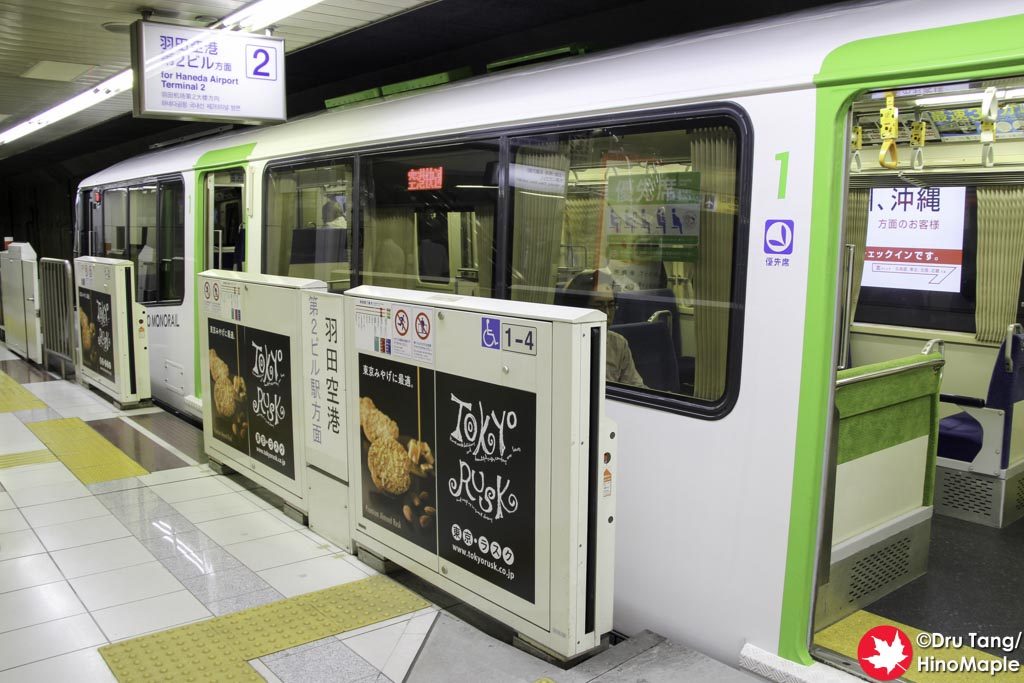 The Tokyo Monorail is still the best way to get there as the views are the best.  You can enjoy the entire waterfront on your way to the airport, or on your way back.  The ride is not as smooth but they also have express trains from Hamamatsucho to the Airport every 12 minutes during the day.  Be sure to never take the local train as it is always passed by the express, but they also have a rapid train service that is also useful if you miss the express. 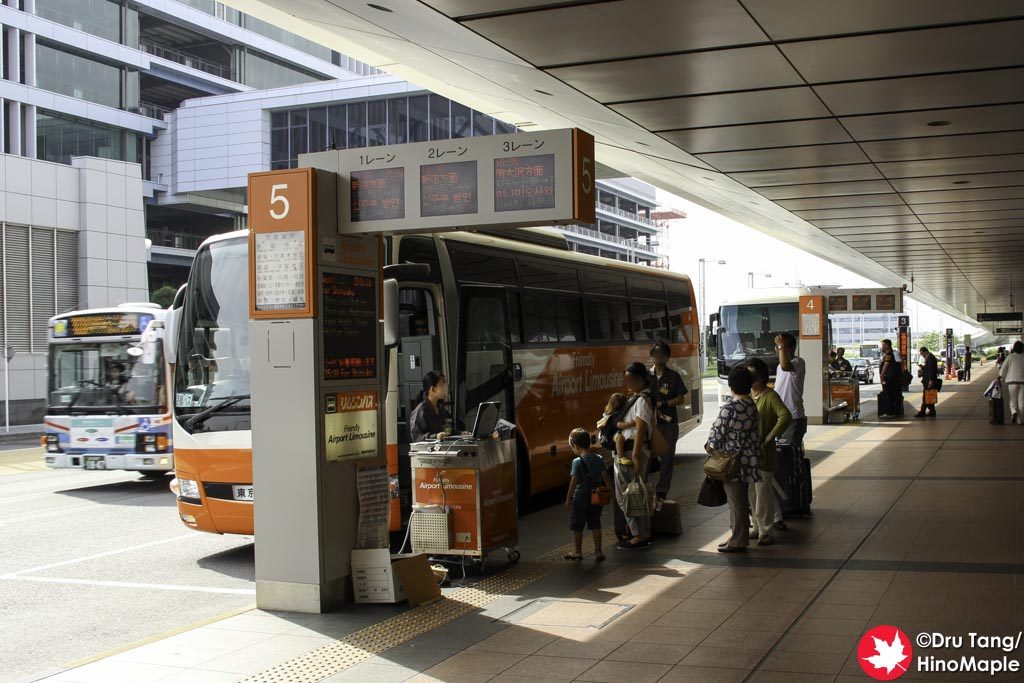 Buses are also a good option but often more expensive than trains, but for door to door service, this can’t be beat.  If you are planning to travel during the rush hour, buses can be infinitely more comfortable.  They are also discussing a new rail line connecting Tokyo Station with Haneda directly and to be complete by the Olympics in 2020, but from what I understand that is likely out of the question until after the Olympics at the earliest. 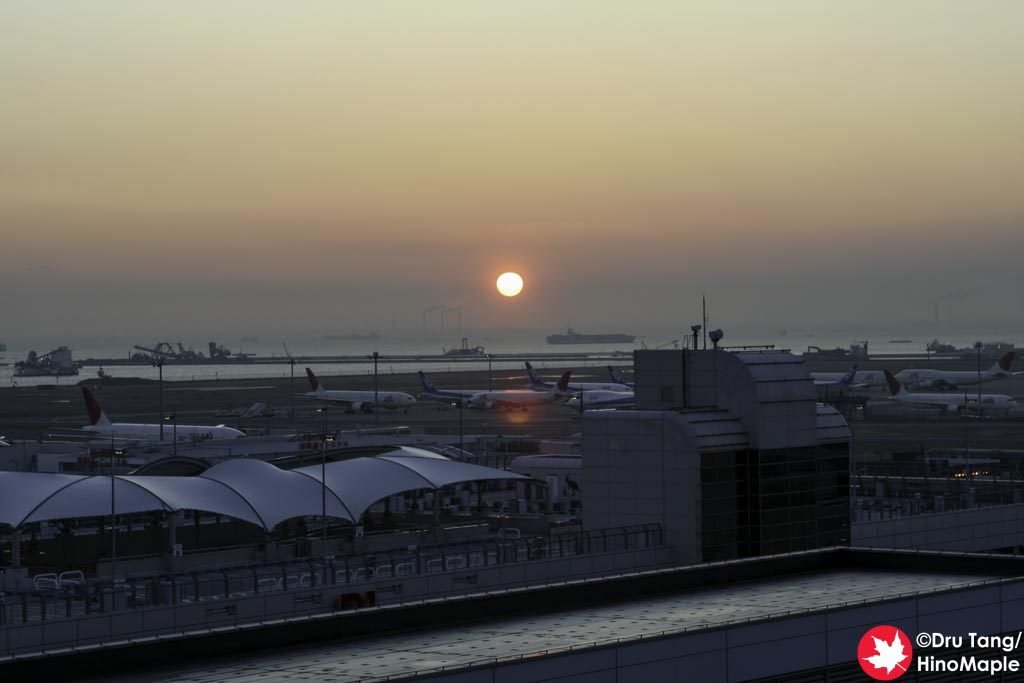 I almost always use Terminal 1 because I almost always fly on JAL.  I have been flying on JAL since I first came to Japan because they had the best services at the time compared to Air Canada.  While their entertainment services are just standard today, their customer service is still great compared to Air Canada, but with ANA now flying to Vancouver, it is really tempting for me to try using ANA in the future. 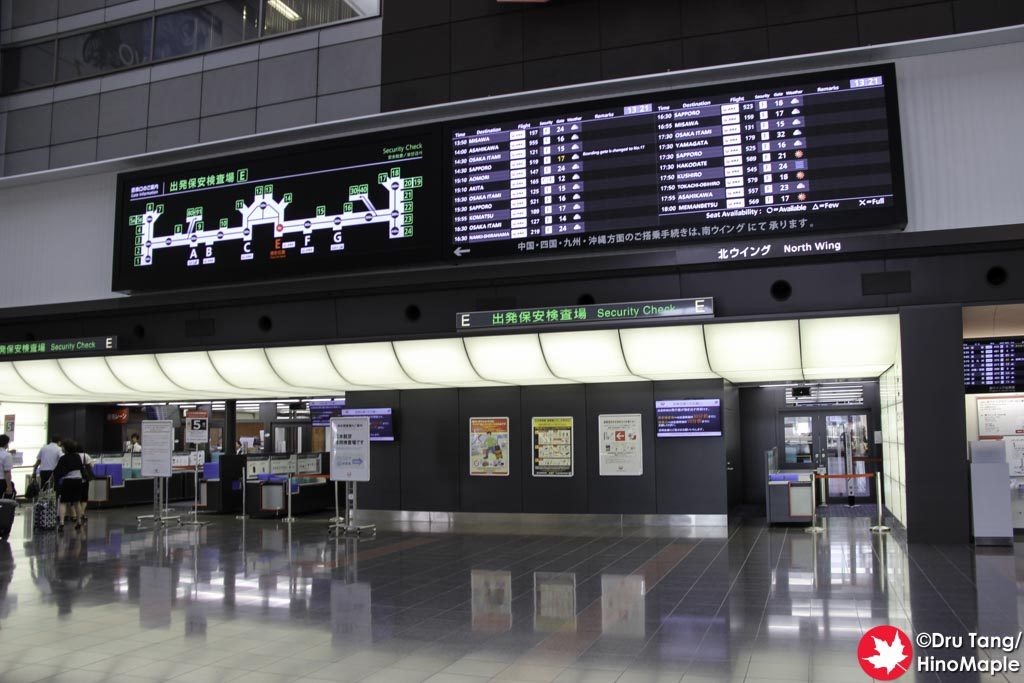 At Haneda, Terminal 1 is unfortunately the worst of the 3 terminals for what you can do and for costs.  I do like the terminal and there is still a lot you can do but I was a little unimpressed with the general layout.  It is a simple layout with the basement being the transportation hub, first floor being arrivals, second being departures, and everything above being entertainment. 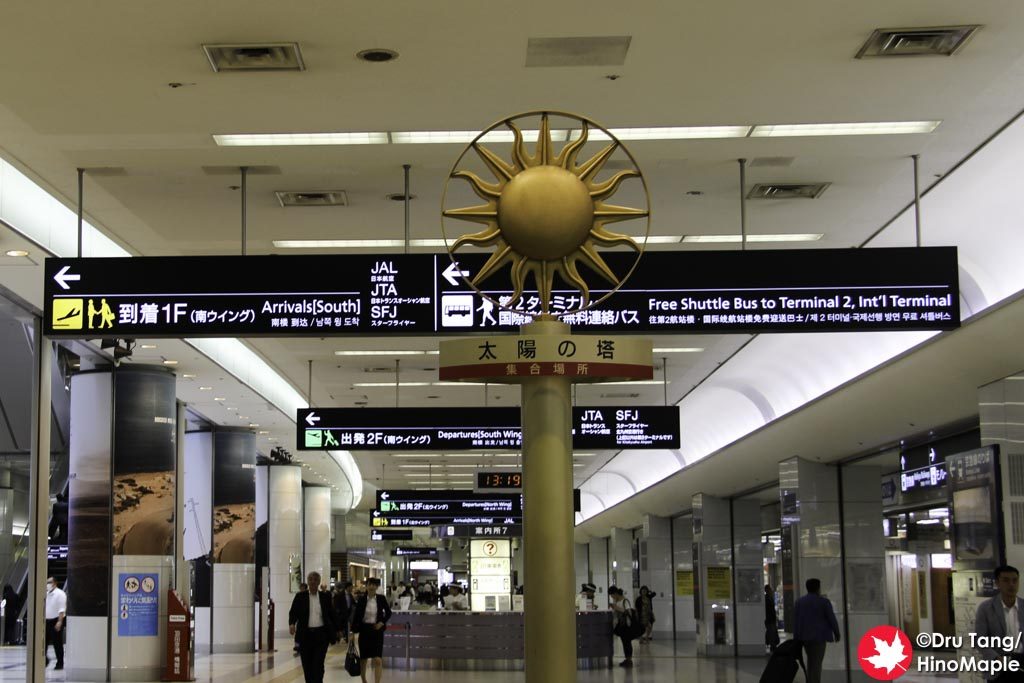 The basement is not really interesting with just the basic amenities; however there is a nice food court and it isn’t as busy at the other areas of the terminal.  If you are looking for something cheap, this is the best place as it is also at the station entrance.  Both the Monorail and Keikyu lines are accessible here but be sure you know which one you want to take as the entrances are not next to each other. 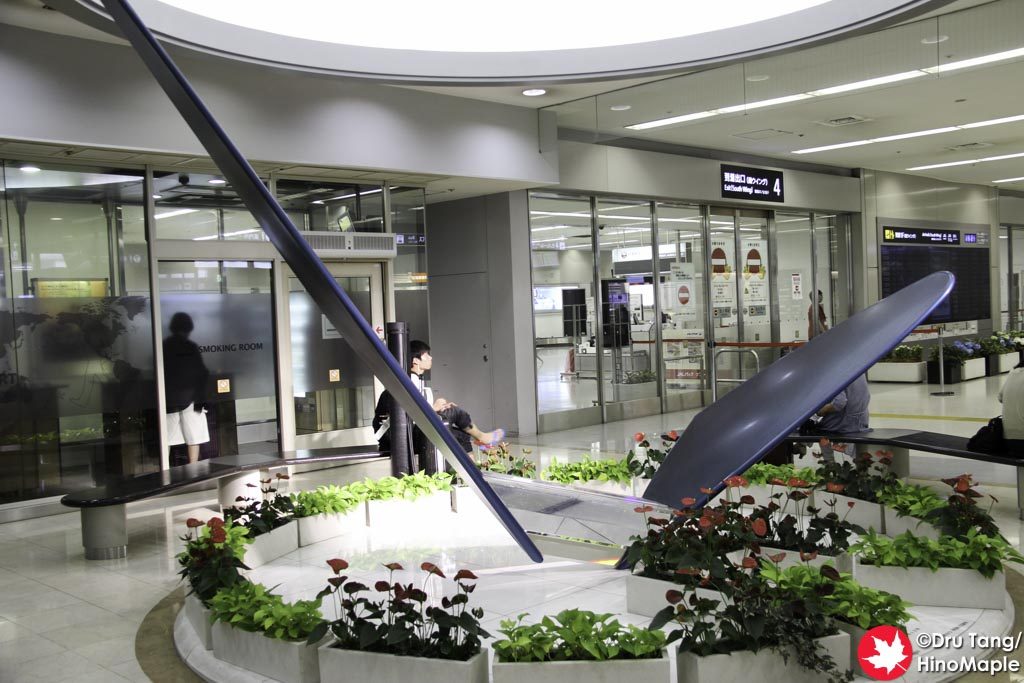 Art in the Arrivals Area of Haneda Airport (Terminal 1)

Arrivals is also pretty bare bones, but more so than the basement.  There isn’t a lot of space for things as they need to use it for the luggage carousels and meeting areas.  Outside is the typical bus stops and you can also buy bus tickets before you exit.  Most buses have tickets available at the bus as well, but I cannot guarantee that. 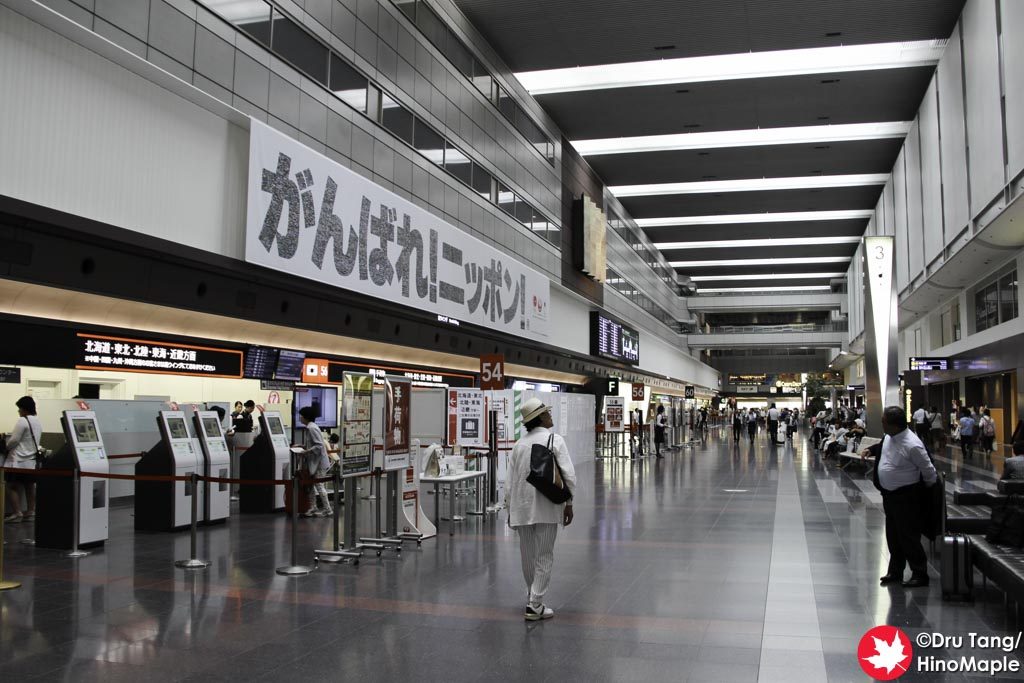 The main departures floor is where everything is happening.  It is, as with many simple airport terminals, very long.  At both ends you have small restaurant sections but the central area is where most of the shopping is located.  If you are taking a flight, you need to be careful with which side you need to be on, but generally speaking it doesn’t matter.  You can walk from one end to the other but you can save a lot of time and energy by going to the correct section.  For the tourist, there isn’t much in the departures area aside from a few shops with local snacks. 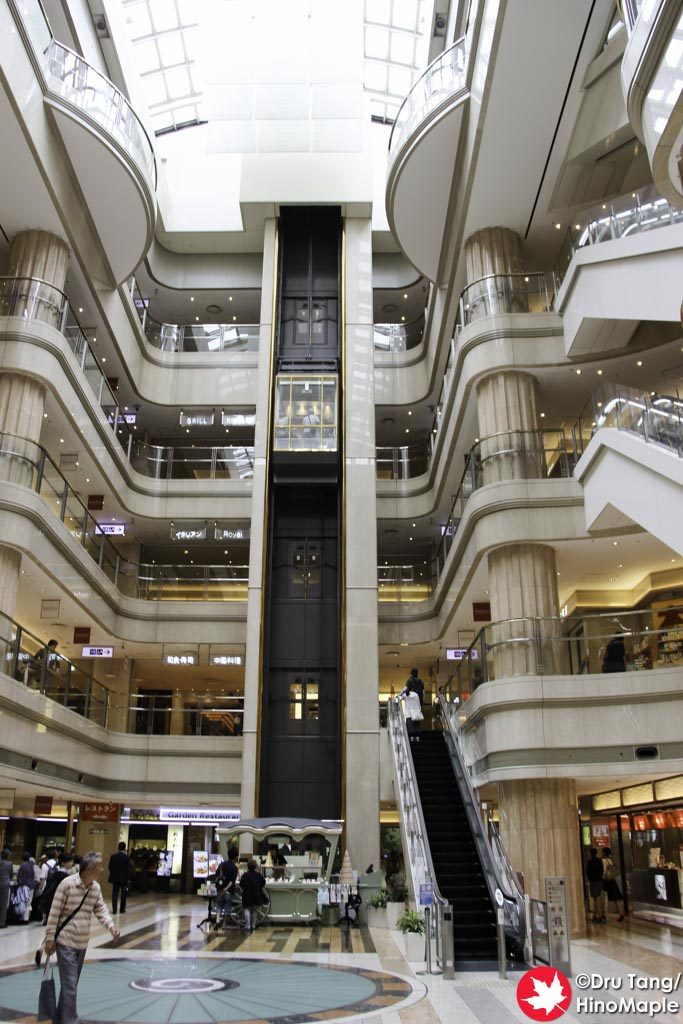 The central shopping area is pretty typical of what you’d find in any other airport.  You can find some specialty sweets shops and other local specialties.  Most of the food is famous in Tokyo and Japan and many people buy them as gifts.  You can also buy these throughout the main departures floor but the central area has the more expensive gifts.  As you move up you have the typical shopping outlets but don’t expect huge deals.  You are better off heading up to the very top where you can head out to the observation deck. 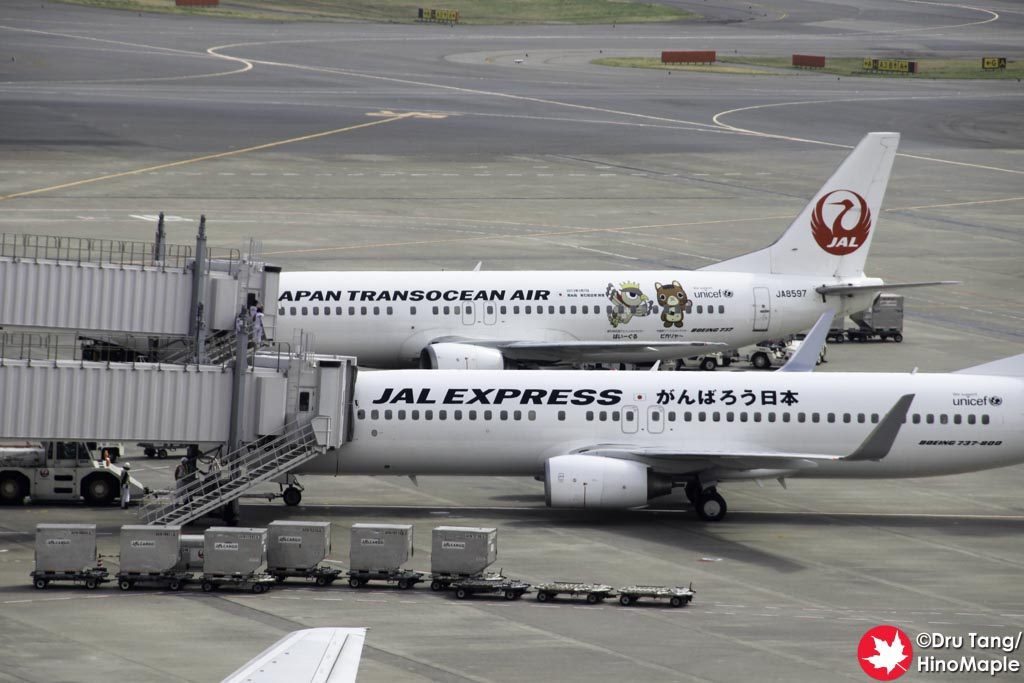 The observation deck of Terminal 1 has the best views, but it really depends on how you look at it.  It is located higher than Terminal 2 but it is facing the city.  I imagine that at night it is a bit better as you can see the factories in the background providing a very interesting view.  The observation deck surrounds the central area and there is a staircase giving access to the upper deck on the roof.  The upper deck is the best part as you have unobstructed views of the planes coming and going.  Unfortunately the roof of the observation deck was pretty boring with only vending machines to keep you happy. 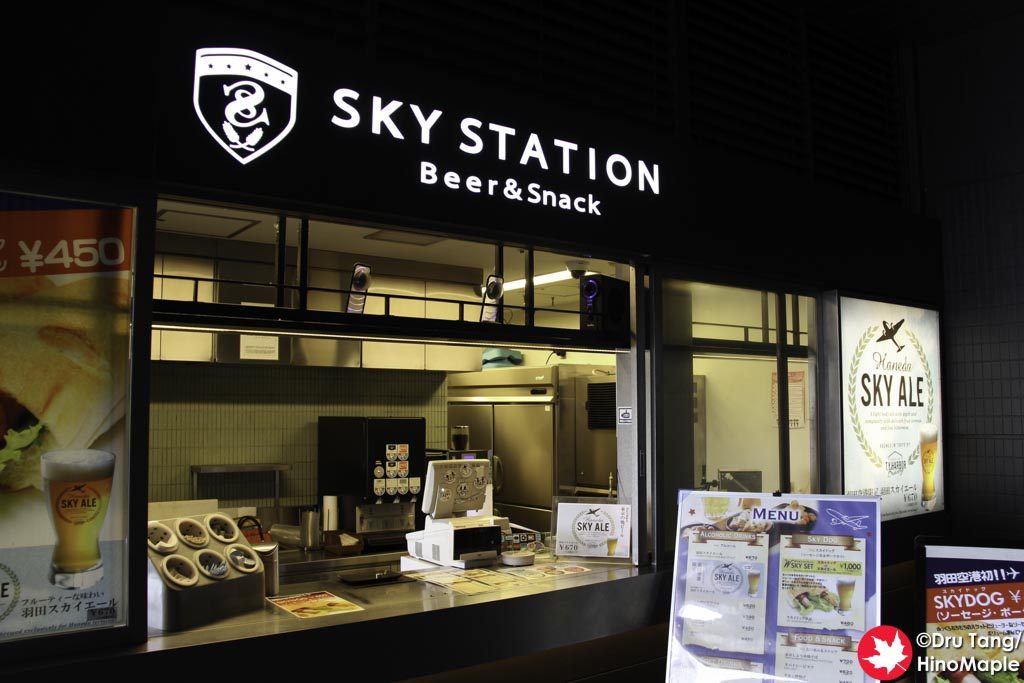 While the roof of the observation deck is a bit boring, if you go to the southern side, there is a small shop, Sky Station, for snacks and drinks.  If you are coming from inside the terminal, once you arrive at the top floor, you have a choice to go left or right to access the observation deck.  Head left to go to the shop.  Before heading to Haneda, I had heard that they have a nice beer produced by TY Harbour as well as some hot dogs.  Since I hadn’t eaten lunch, I was starving and in need of a short break as I was tired from walking all over the terminal for an hour or so. 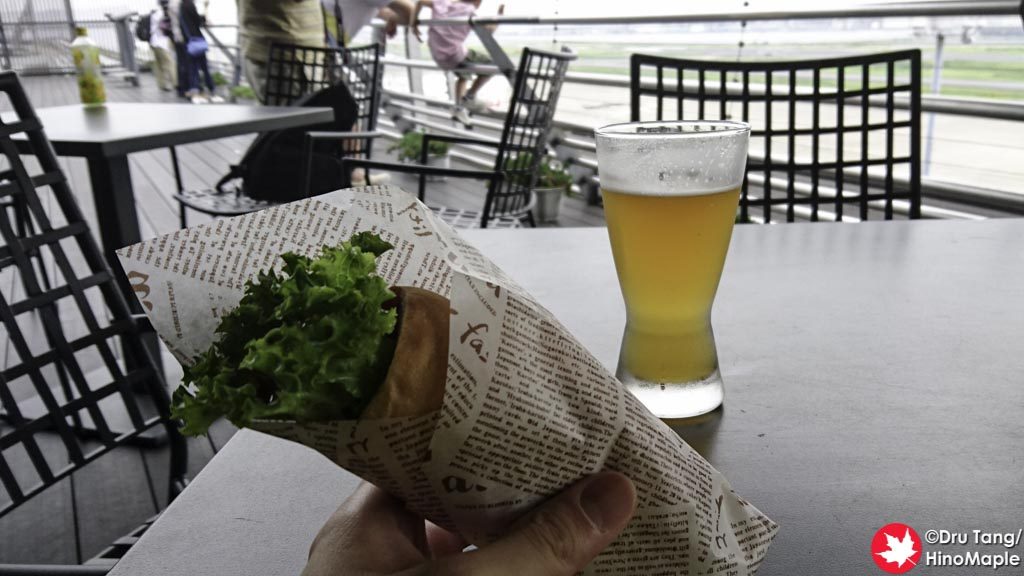 Food and Beer from Sky Station

I grabbed a beer set and took a seat to watch the planes land.  I was lucky as many planes were landing on the Terminal 1 side while the planes were taking off over the bay so Terminal 2 wasn’t as interesting.  The small shop at the observation deck was really nice but the food wasn’t really worth the cost.  I did enjoy the beer as it was a bit hoppier than I expected and enjoying the planes land was a lot of fun.  The hot dog felt a little weird but it was still good as it had a little salsa in it and it was in a French style baguette.  While it was good but I don’t think I’d get it again. 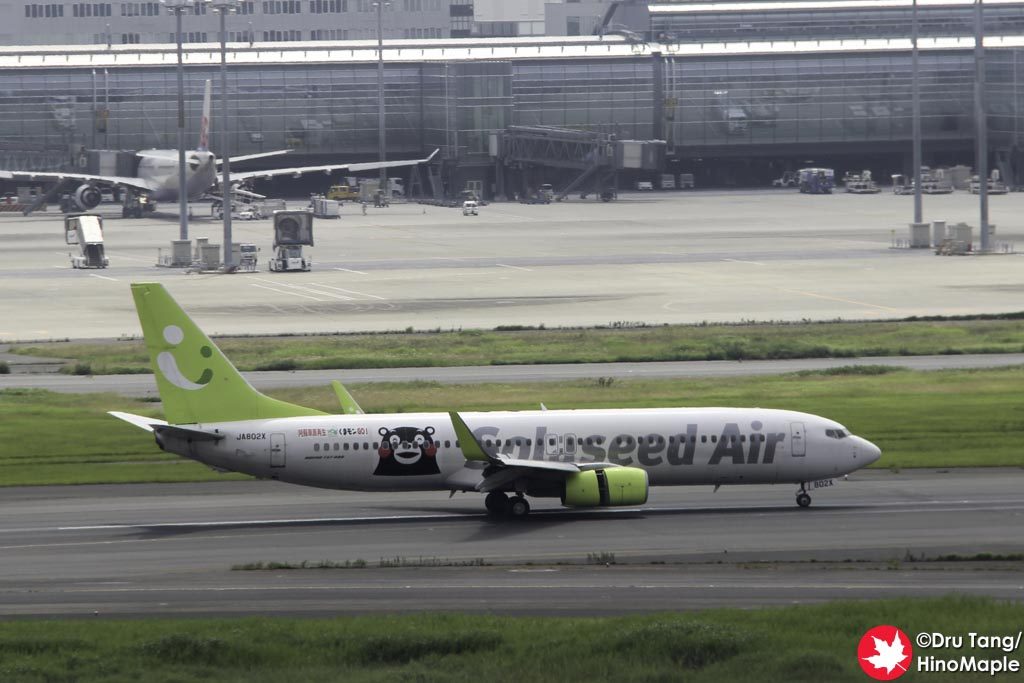 View from the Sky Station Seats

Terminal 1 is a good place and I do enjoy going there.  I often go there because I almost always fly JAL.  I really don’t find the terminal to be really exciting but it is a nice place to be.  Unfortunately I did find Terminal 2 to be the better terminal at Haneda but you’ll have to wait until next week to read all about that!