It’s that time of year again; the time that I head up to Motegi and enjoy the races!  It is an annual adventure that changes every time I go and I really love it.  As always, as much as anything changes, things will always stay the same.  I’m really happy I was able to go and even happier that I was able to go for 2 days rather than the day trip I did last year. 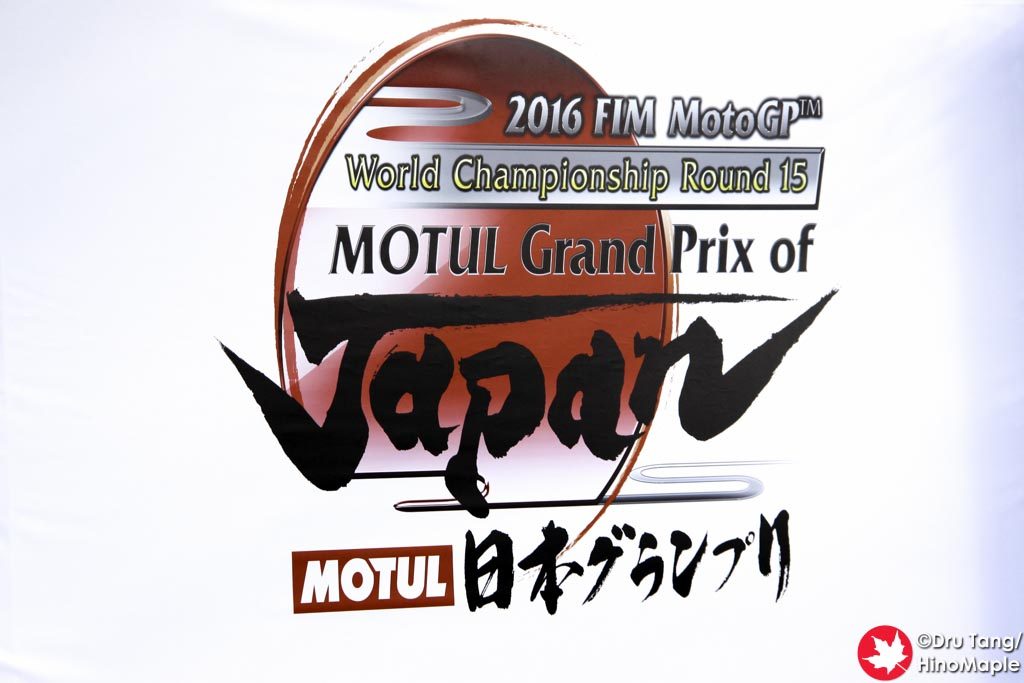 My adventure started on Saturday October 15th.  I had to wake up really early and head out to Tokyo Station where I caught my tour bus up to Motegi.  We always head straight to the Tokyo Metropolitan Expressway, aka Shuto Expressway, and off to the Joban Expressway.  We always head to Mito where we head west to Motegi.  It usually takes about 3 hours to get there.  Since it was a qualifying day, things were not very busy but it was still pretty busy overall.  While I can’t find any official numbers, things did seem a lot busier this year compared to past years. 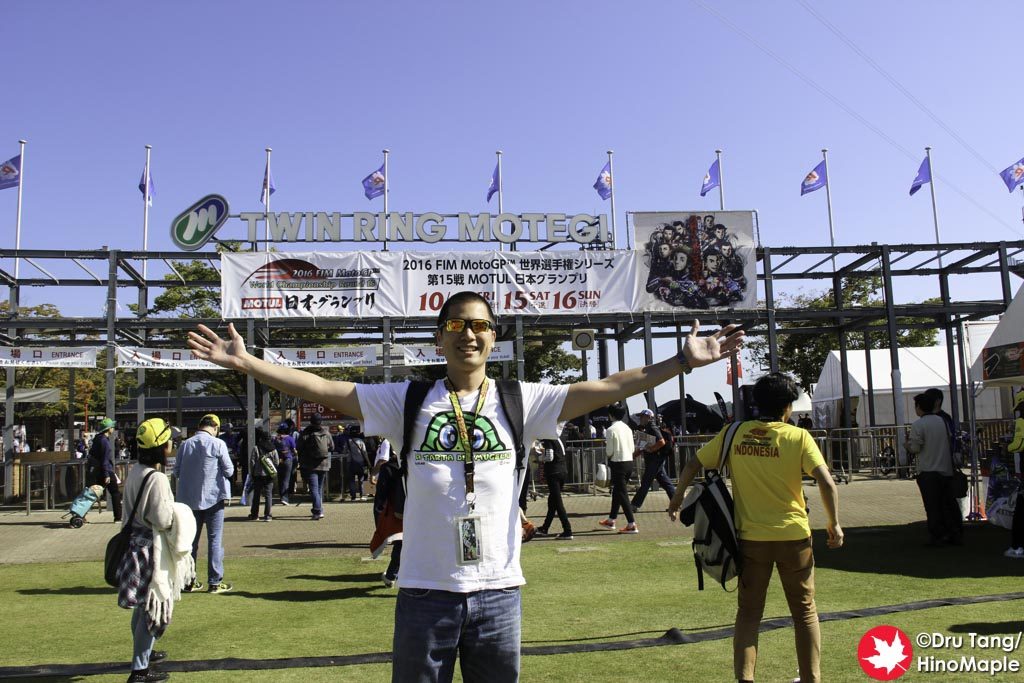 Welcome to the 2016 Japan Grand Prix

Qualifying day has not really changed over the past 8 years that I have been attending.  I no longer have to walk around the entire course nor do I feel I have to see everything, but I end up seeing the important things in the central area.  As always, I took the obligatory shot in front of the main entrance but the main entrance had changed a lot.  They added a new Moto Stage where they had interviews and other events.  There was even a small aerial bike area sponsored by Monster just outside. 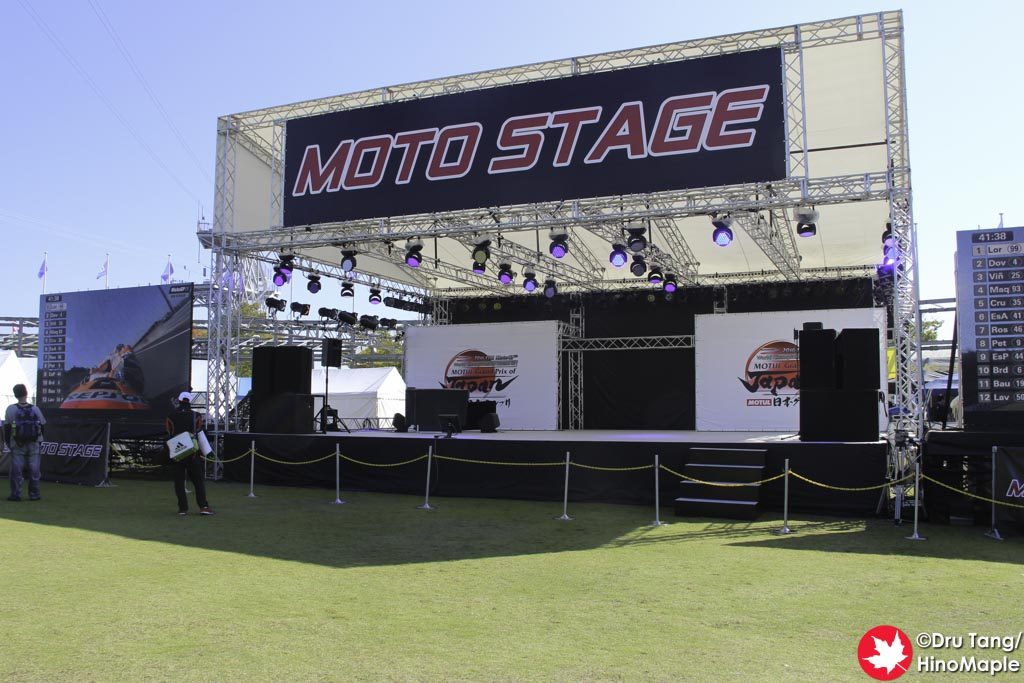 The main area of the MotoGP weekend was the same as always.  They had a bunch of food shops along the main straight just past the main grandstands.  They also had all of the major manufacturers displaying various bikes and having their own booths setup.  Yamaha had the biggest booth this year, but Honda was also really big and may have been slightly bigger.  It was hard to tell.  Suzuki was still a bit limited with Ducati and KTM having small but sizeable booths as well.  Behind the manufacturer’s section were the shops.  You can do a lot of shopping, as I always do, and I had too much fun. 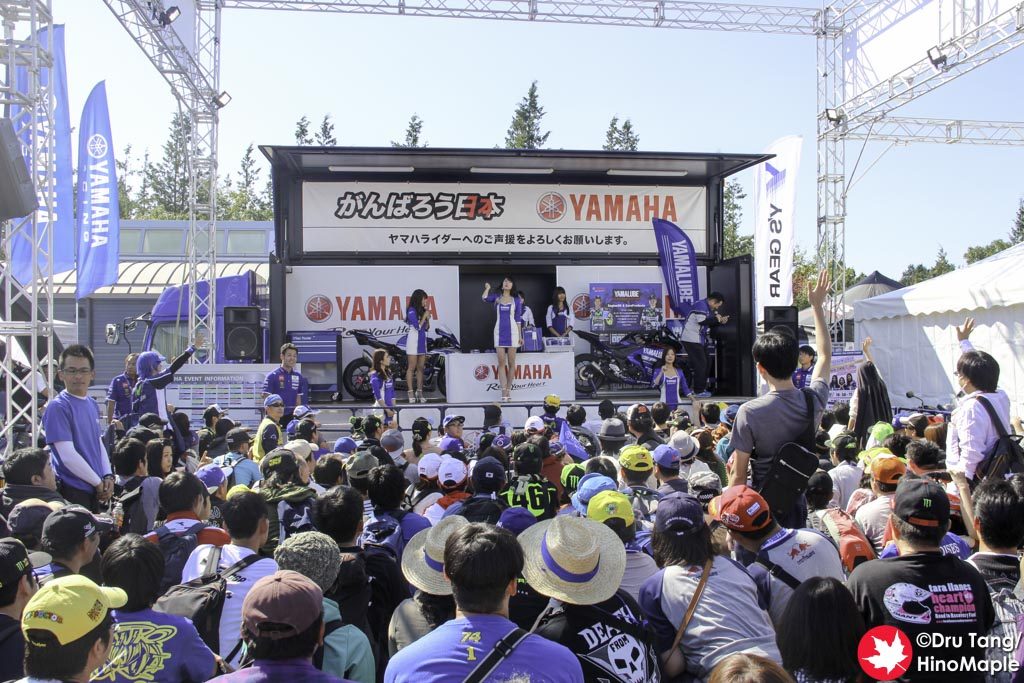 Part of the Yamaha Booth 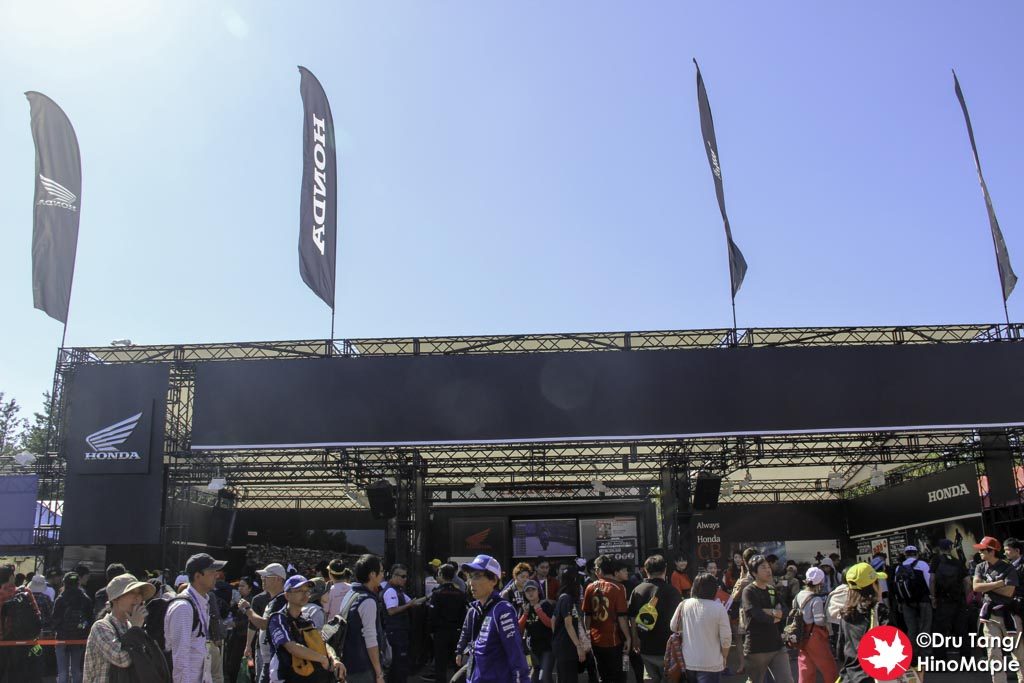 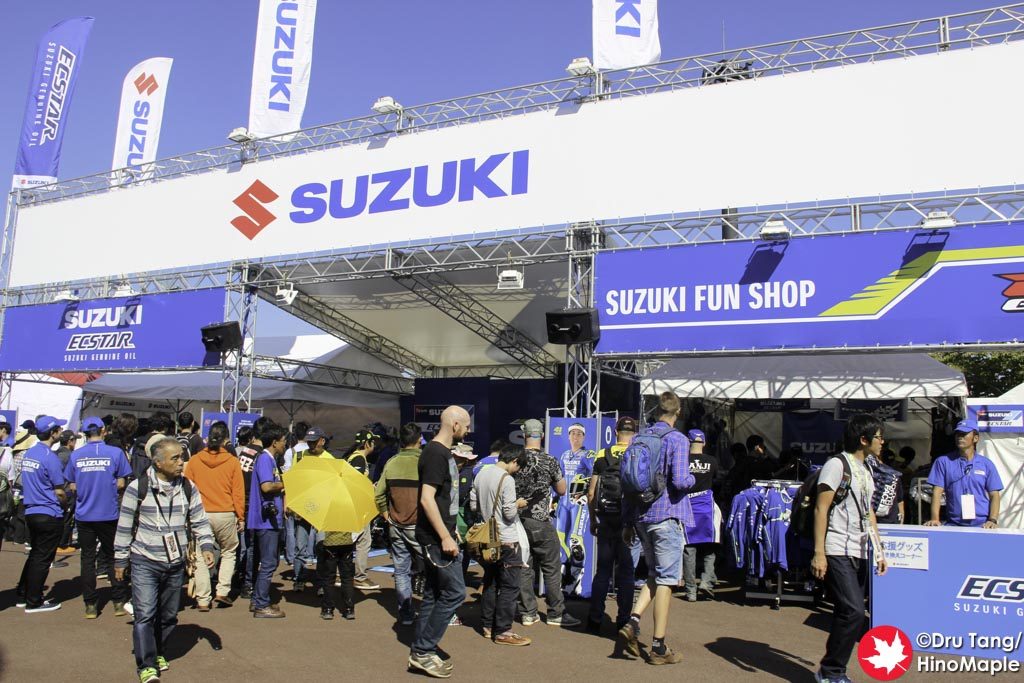 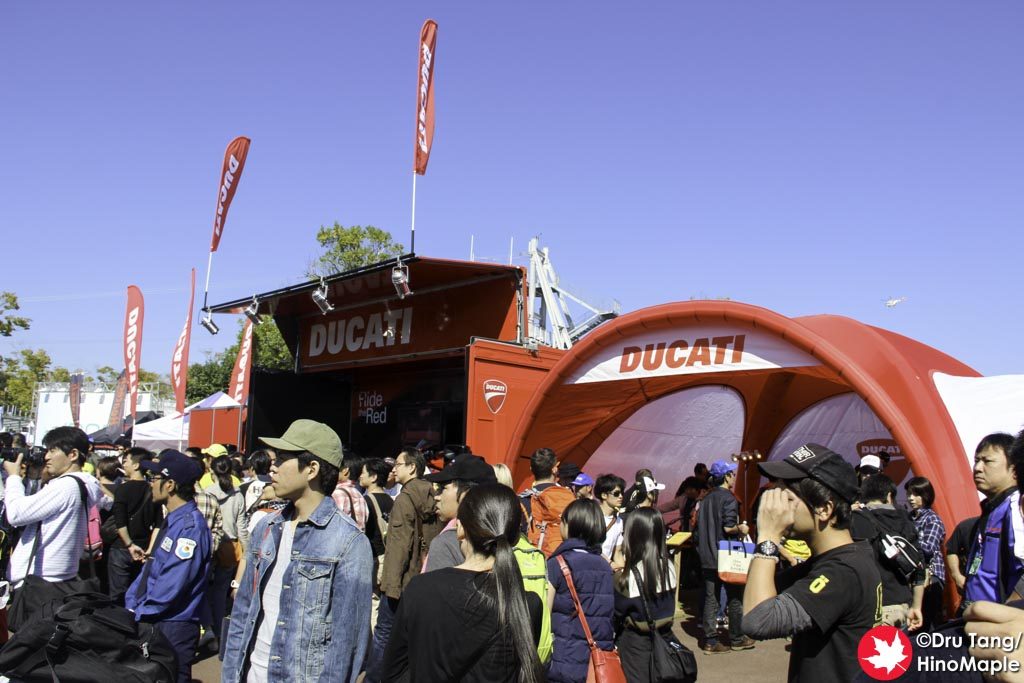 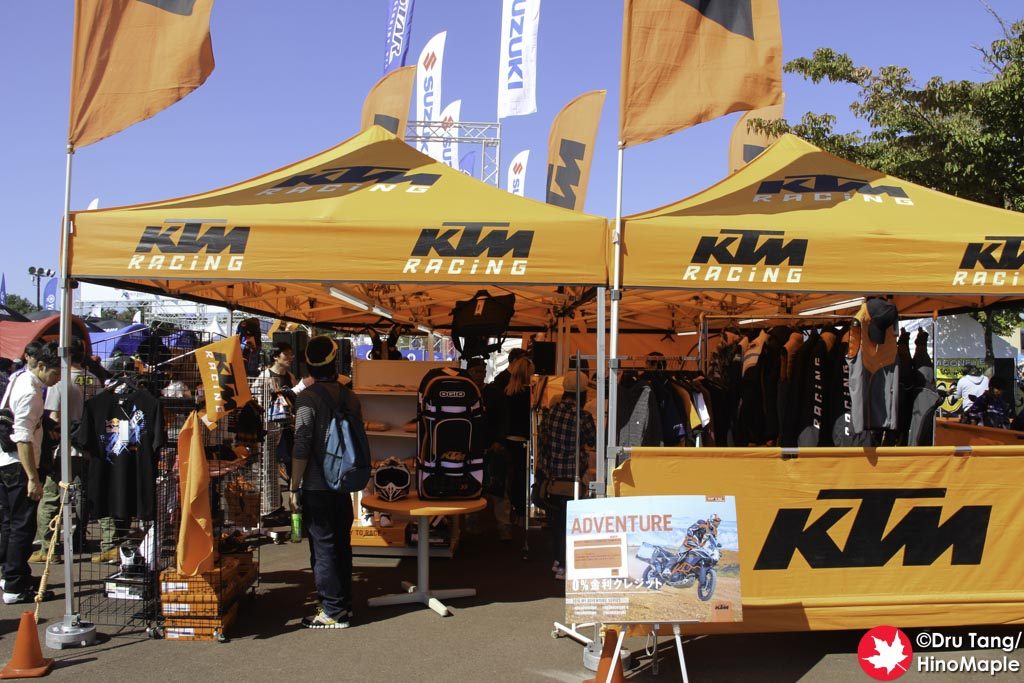 This year, the shopping wasn’t as good as I would have liked.  There were no Valentino Rossi shirts that I had to buy but the official Motegi goods were pretty good.  I bought a few official items and got a free draw for a prize.  I was a bit lucky and won some clear files worth 1200 yen.  I was happy, but not sure what to do with the clear files as I usually don’t use them. 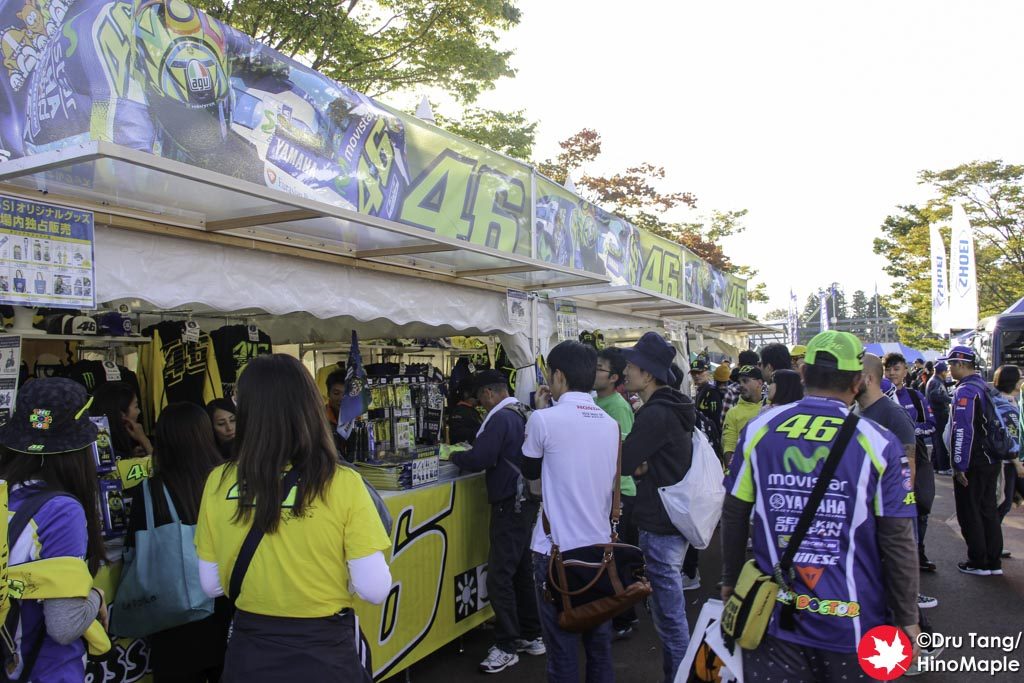 Shopping at the 2016 Japan Grand Prix

The other main thing that I always do at the Grand Prix is head to Romantic Village’s tent to have beer.  They always have wonderful beers and being a craft beer company, I’m really happy they are allowed into the event every year.  They have been around for 10 years now and they had a really cool display showing the specially designed bottle labels that they have each year.  I always get their Dog Fight beer, which is an IPA, but they also had a new Golden Ale which had a wine flavour to it.  The other reason I enjoy drinking at the Romantic Village tent is because it is next to the VIP area and there are always various important people just walking past. 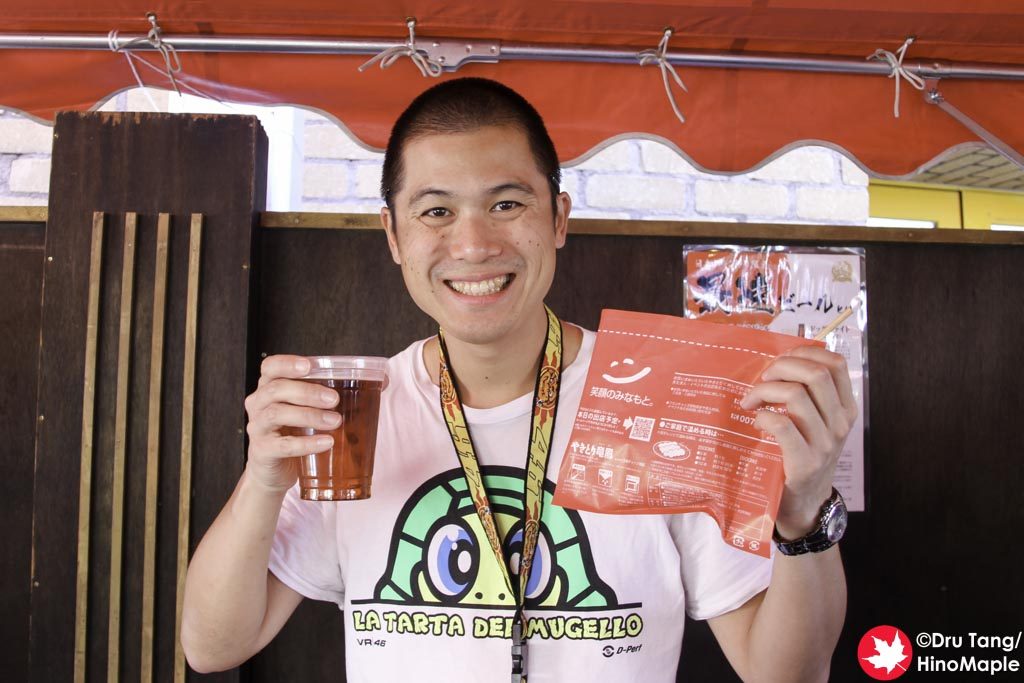 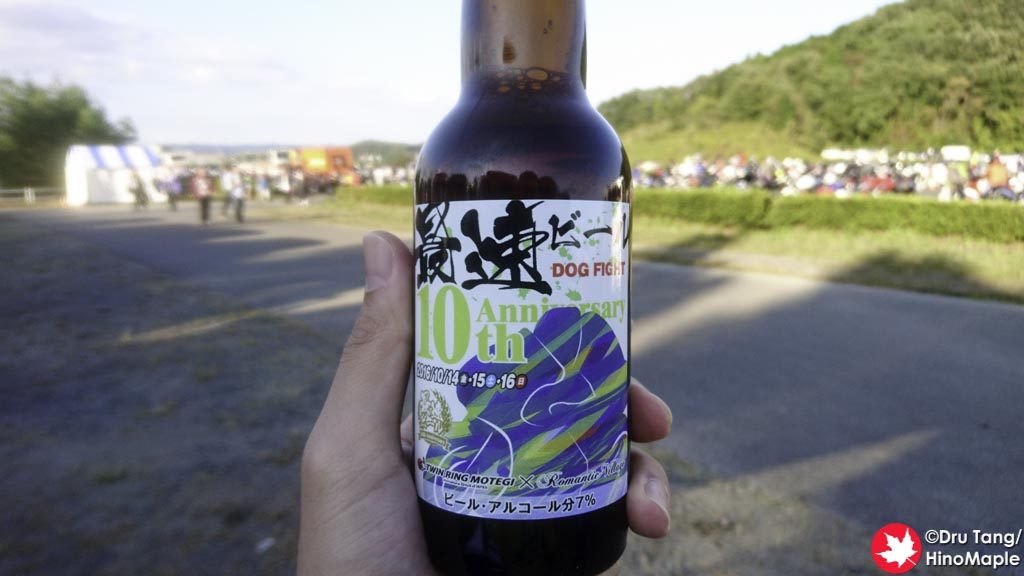 For the last couple of years they created a new V Grandstand along the main straight.  They put the stands over the existing super speedway oval and you are really close to the action.  They have been changing things a bit each year and this year they continued with the food truck theme.  They had food trucks setup at both ends of the grandstands and the food was pretty good and the prices were reasonable.  In the middle, they had some higher class places as well as a small museum section.  The museum was more of a Valentino Rossi tribute with many of his bikes from Honda and Yamaha present.  There were other bikes from different riders of the different eras but most of them were from Valentino Rossi.  At the end of the museum was a small shop where you could also buy various gear from his VR46 shop in Tokyo.  The prices were standard but definitely not cheap. 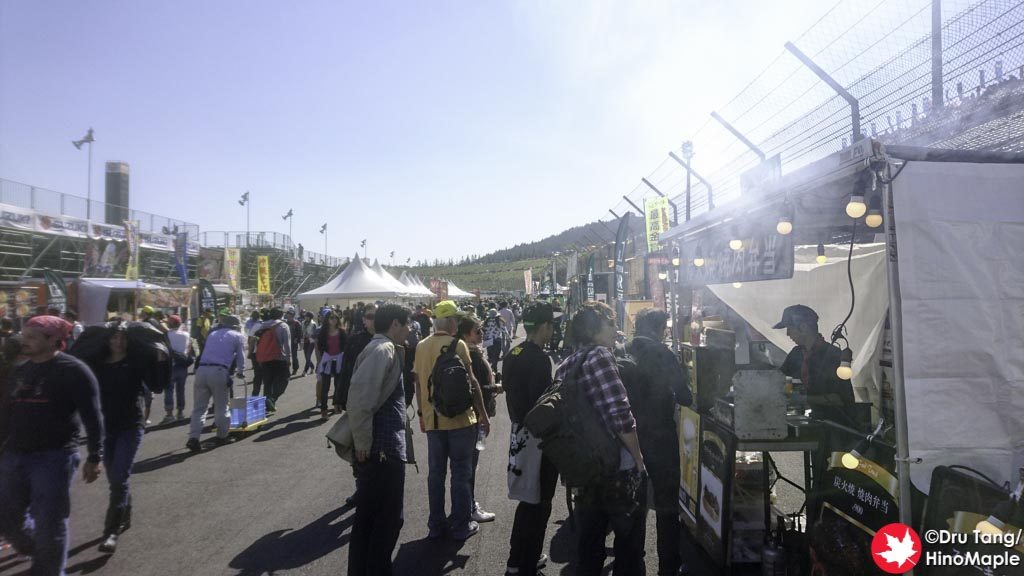 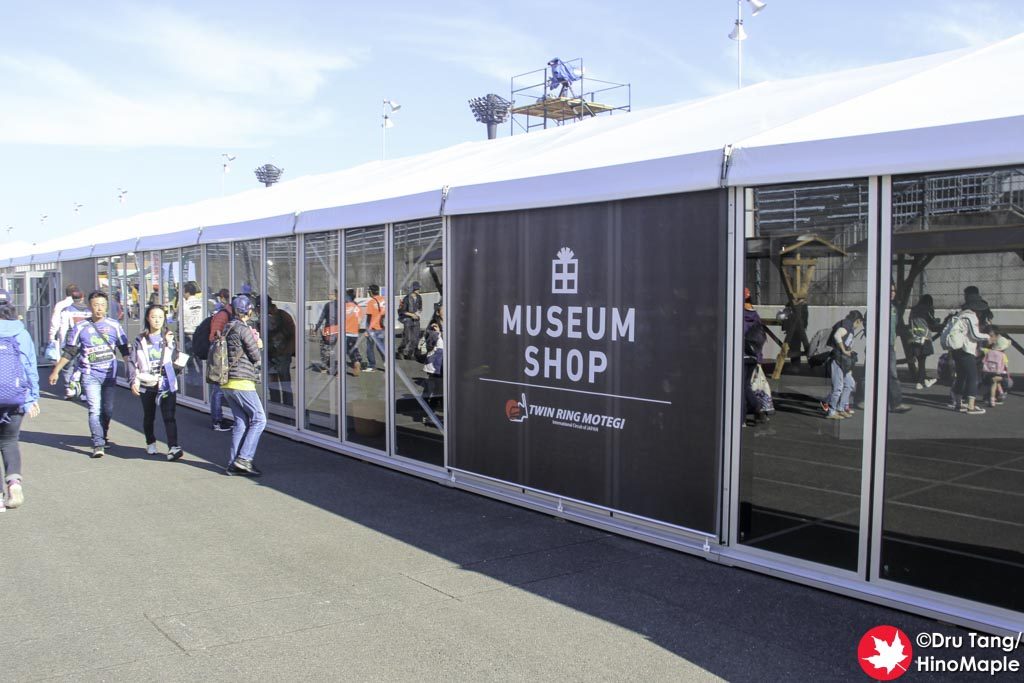 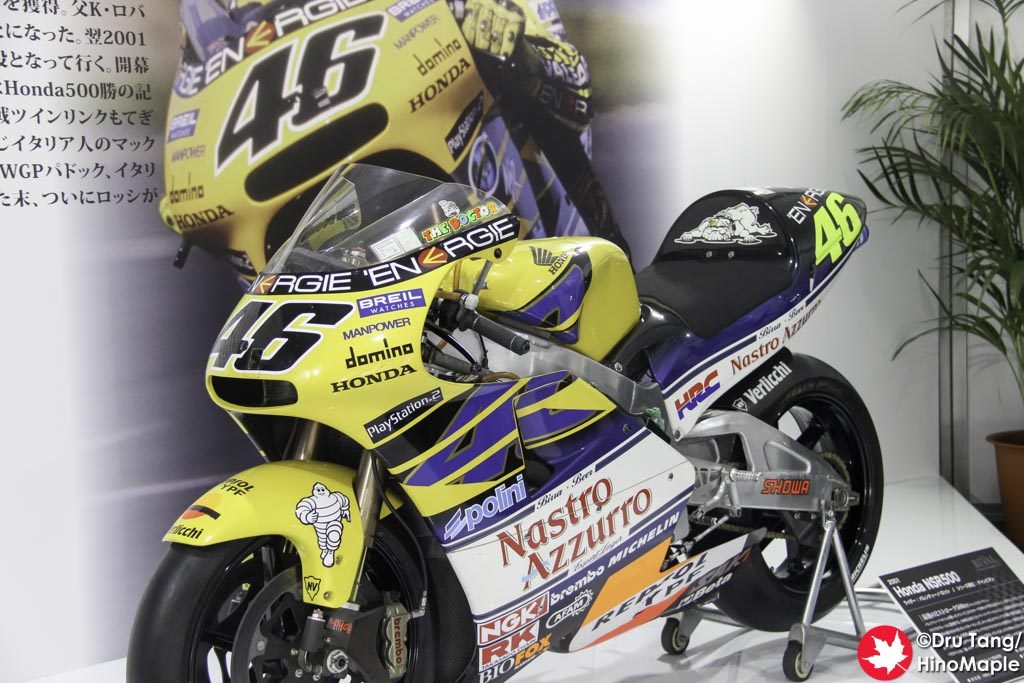 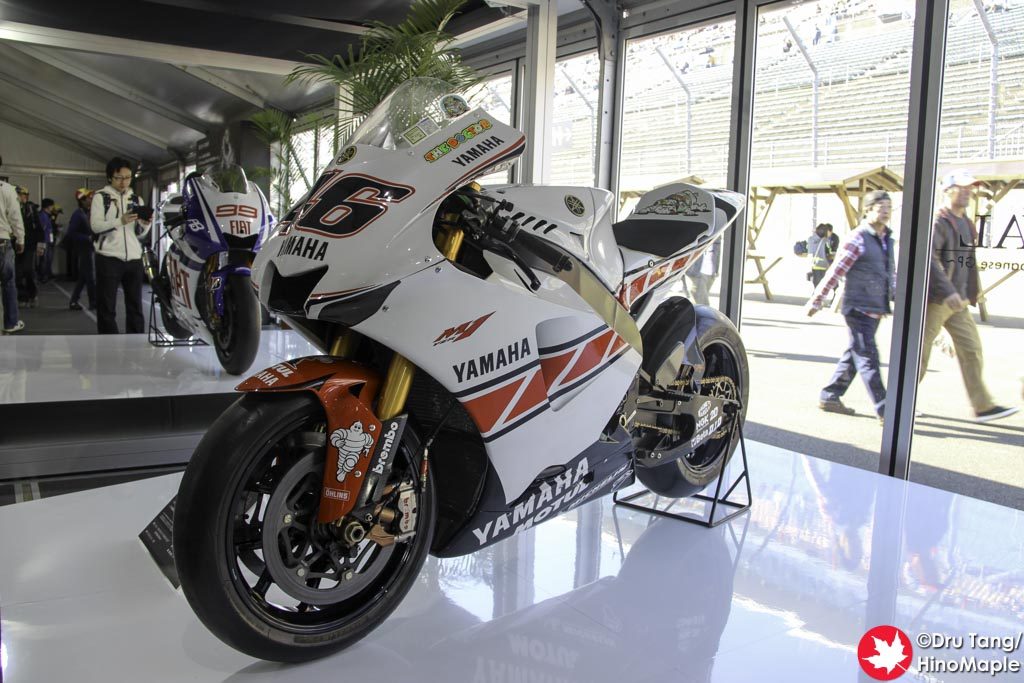 For qualifying day, I spent a little time in the V Grandstand but I spent MotoGP qualifying at the Z Stands as that is still my favourite spot to watch the race.  For any photographers looking for good shots, the Z Stands are really good for general shots as the riders go around the 90 degree corner, but I found that heading up the hill a bit towards the flag box allowed you to get better photos of the riders with their right foot off the peg.  Other than that, nothing new was learned for me. 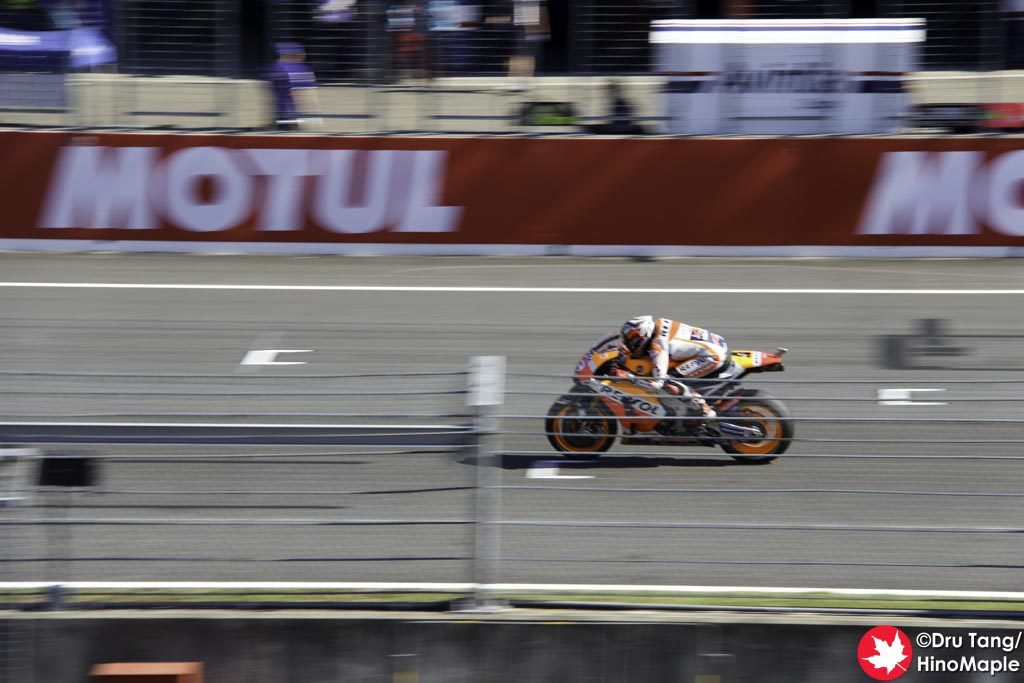 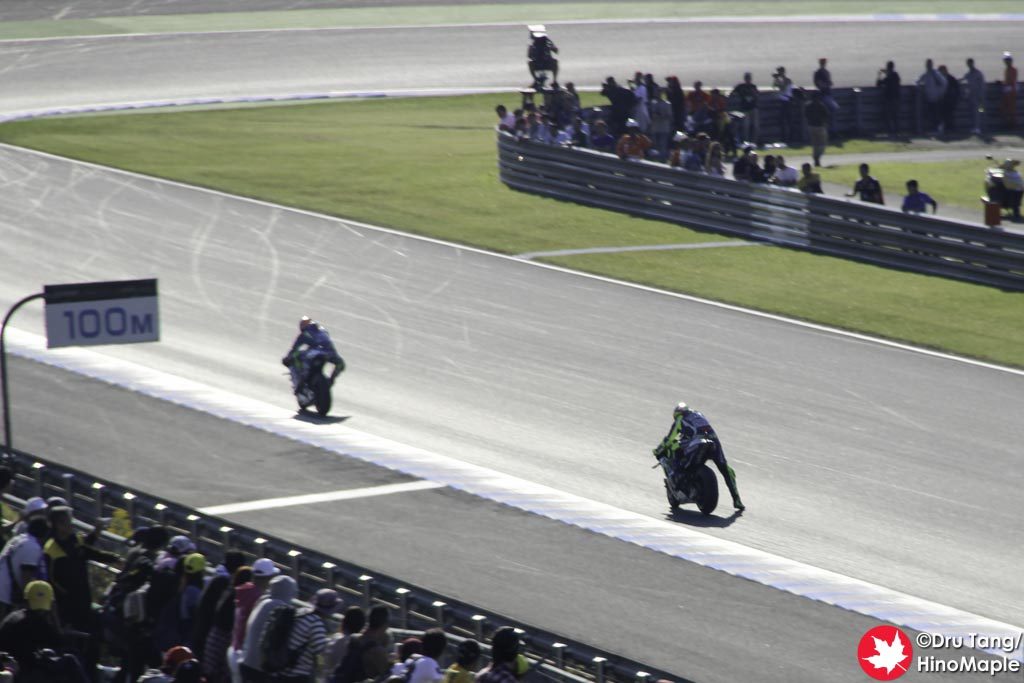 The race itself was a series of ups and downs.  Qualifying was exciting as Valentino Rossi was on pole but the race itself was a total wash for me and many fans.  They had a big Valentino Rossi cheering section this year in the Z Stands and they were let down on lap 7 as Rossi crashed out at the hairpin.  The next blow, especially since I was sitting in the Yamaha cheering section, was near the end of the race when Jorge Lorenzo crashed giving Marc Marquez the 2016 championship.  While the crowd was really crushed, they still applauded when Marc Marquez returned to celebrate with his team.  Thankfully there was no booing. 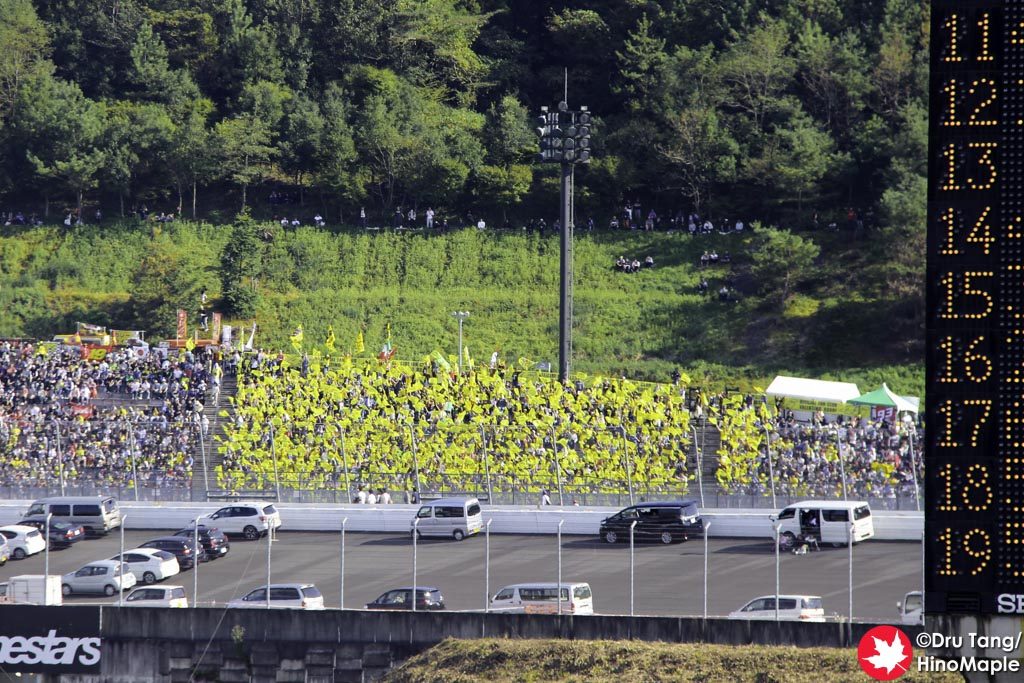 The other highlight of the race was Shizuka Okazaki.  She is a Yokohama native and the first Japanese woman rider in the championship since 1995.  She was a wildcard entry for Moto3 and she was capable of qualifying.  She didn’t have a great race as she was visibly slower than the main pack.  She is not going to be capable of being a full time racer but she definitely held her own and was able to finish on the lead lap.  Hopefully she will inspire other women in Japan to follow her and show what they are truly capable of if they start racing at a young age.  Unfortunately I think Shizuka started too old (10 years old) when most stars will start when they are 4. 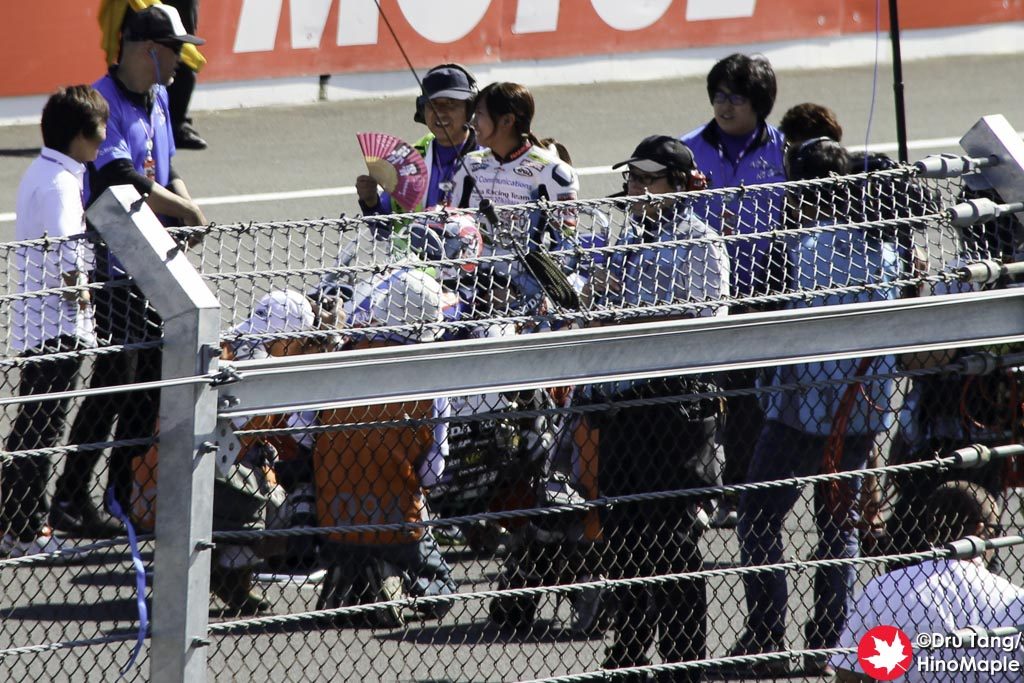 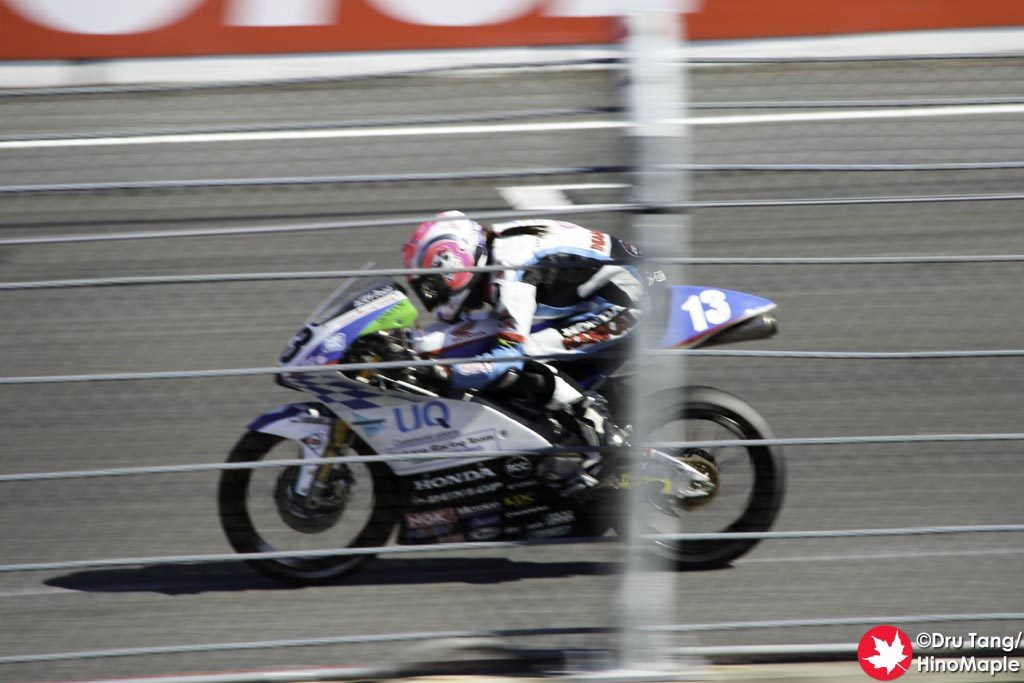 I love going to the Japan GP in Motegi and I will continue to go every year as long as I can get the time to go.  Money is never an option for me when I go and I am always happy to open my wallet till it is empty.  It may be a problem for the future months but I always have a great time.  Going for 2 days may mean that I am a little bored overall, but I have a lot more time to just enjoy myself at a very relaxed pace compared to a single day trip when I have to really push hard to do everything.