It’s that time of year again, when I head out to Meiji Jingu to get sloshed and enjoy watching baseball.  It is an annual event for me, or even more at times.  I always try to get out to the Tigers VS Swallows games when they play at Meiji Jingu but sometimes it is not possible due to my schedule.  This year I was pretty lucky to get a day off and the weather cooperated with us. 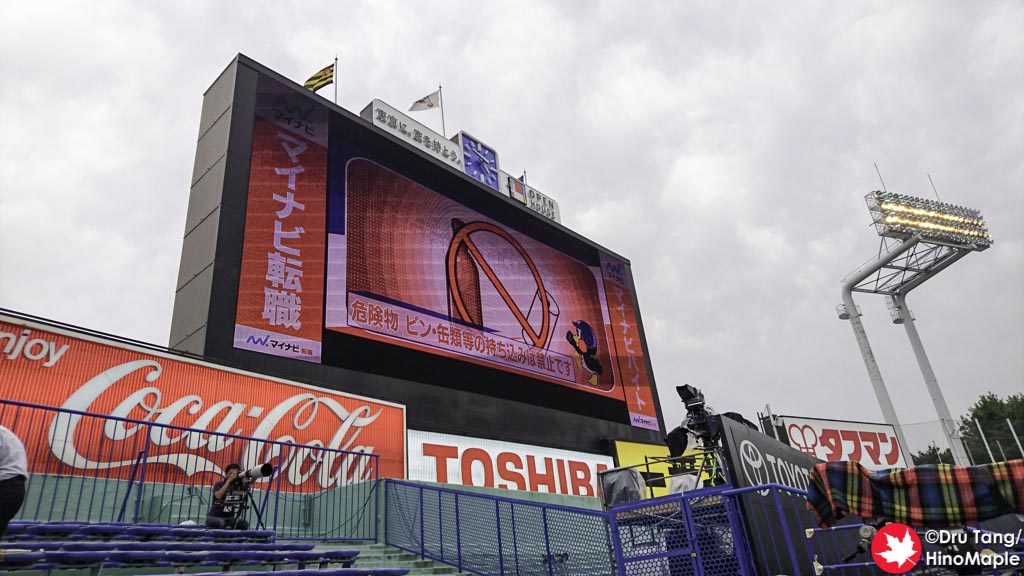 Announcement of the ballpark rules before the game.

On May 25th, at the last second, I made a decision to head to Meiji Jingu to see the Yakult Swallows play the Hanshin Tigers.  It was a last second decision as the weather was really changeable for the week before the game.  The weather forecast originally said it would rain, but a couple days before the game it changed to being only cloudy.  I have also been pretty busy but decided that having a little fun was important so I could keep working hard in the long run.  I arrived early and was able to get a ticket for the outfield with no problems.  I have my regular seats, even though there are no reserved seats and I was early enough to get them. 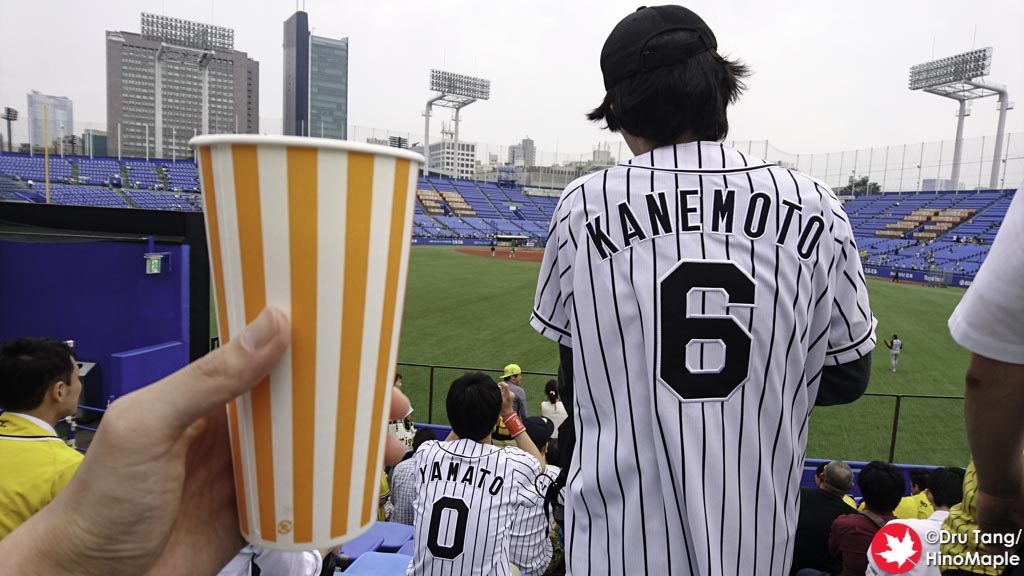 First beer of the game. 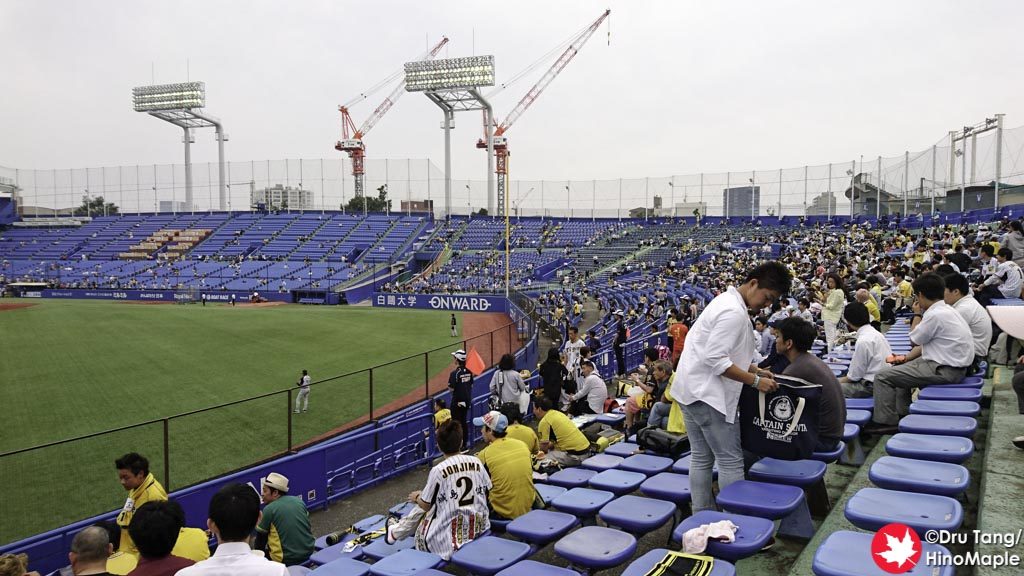 Small crowd, but it was still early.

When I entered the stadium, things were looking nice.  The skies were a bit gray but the wind was picking up from behind home base so that meant that home runs were more likely.  I arrived during the batting practice for the Tigers.  Once sat down, I proceeded to relax and enjoy the beer that I brought.  The wind made it a bit chilly for the evening but it was still a good evening.  Things always start to heat up as the game approaches and all of the fans start to sing the songs of each player before a rousing ovation of Rokko Orochi. 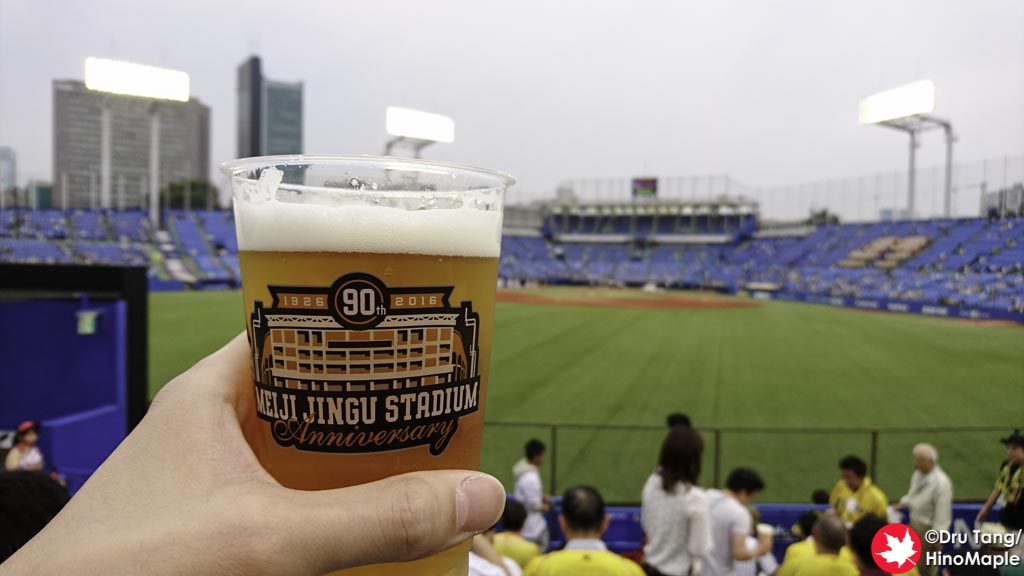 Second beer for the start of the game. 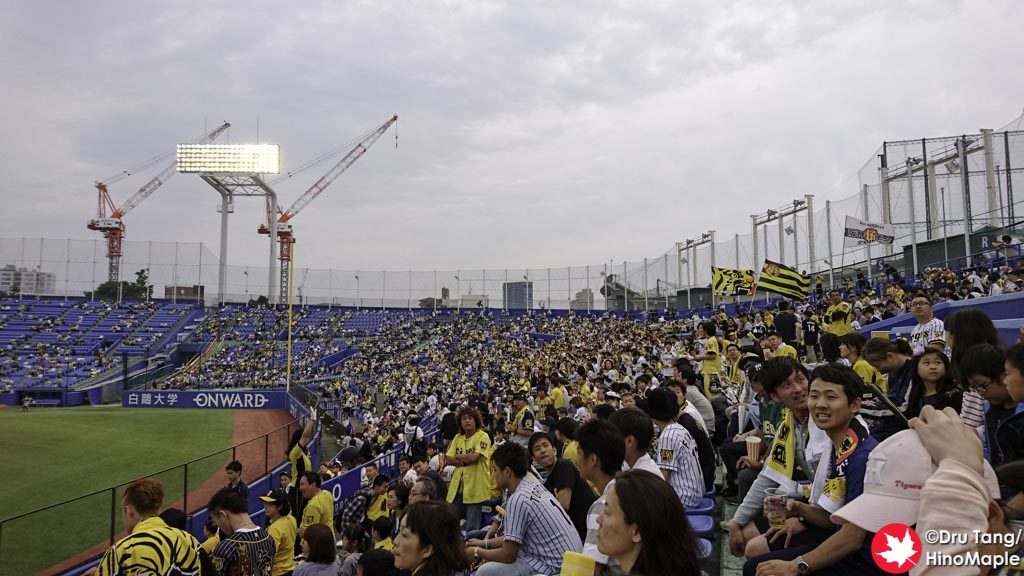 Getting full as the crowd warms up with songs for the players.

When the game started, things got off to a rocky start.  The Yakult Swallows went up by 3 in the first inning and all of the fans were feeling dejected.  I was thinking that it was going to be a blowout.  A quick scoreless second inning brought us to the 3rd which was really eventful.  Everything started quickly with a couple runs by the Tigers followed by a 2 run homer by Gomez.  Gomez is the king of home runs for the Tigers and he lived up to his name by getting a 2 run homer to help the Tigers into the lead by 1.  The Swallows then came up and they destroyed all hope the Tigers had by getting 3 runs in the same inning making the score 6-4 for the Swallows. 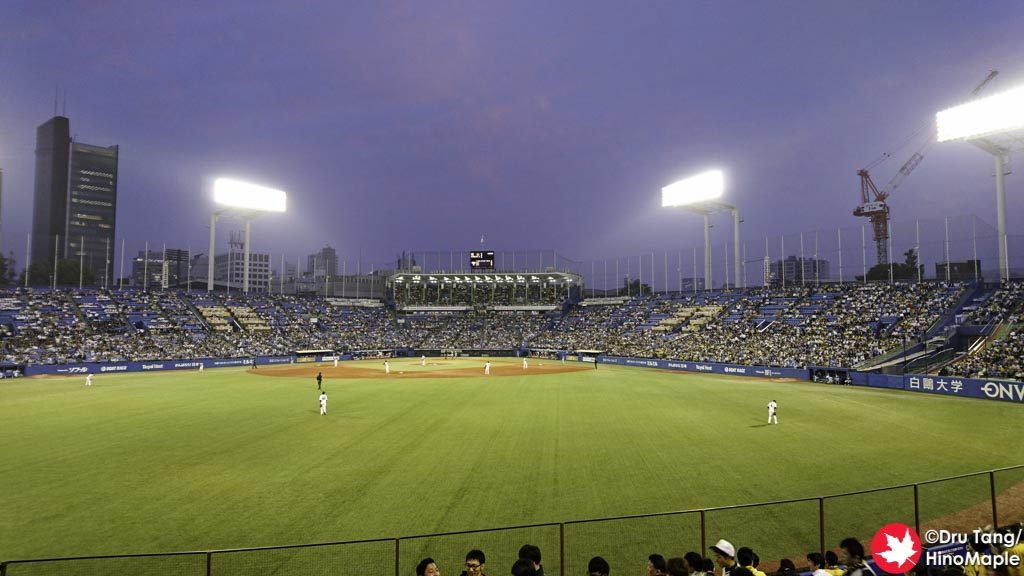 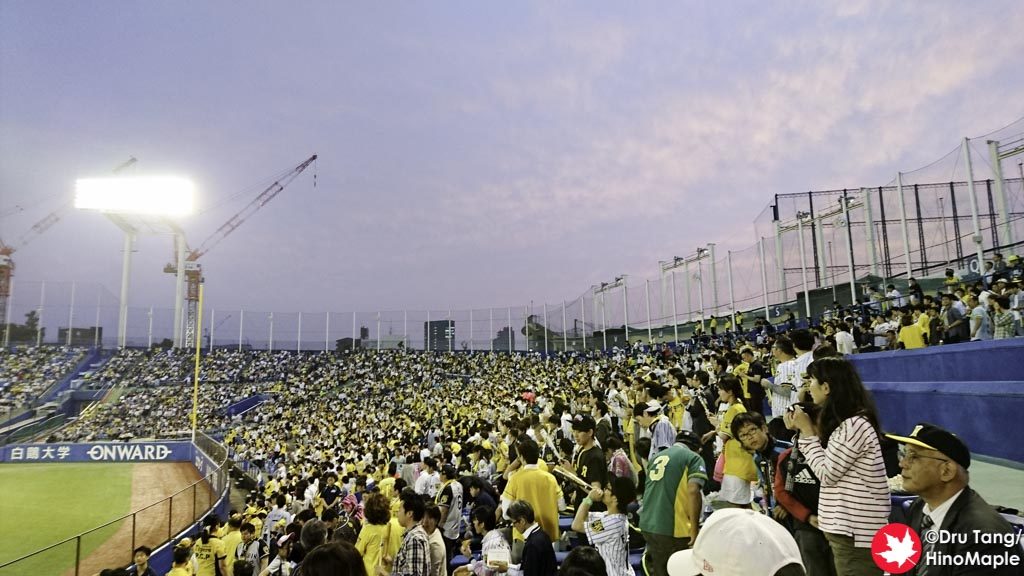 The first inning has started and people are still coming in after work.

The Swallows continued to hurt the Tigers by getting a couple runs in the 4th inning and things were definitely looking bleak for the fans.  The energy was starting to run out and the game was running long.  By the 6th inning, things were getting desperate.  The Tigers made a big rally by getting a couple runs in off a hit from Fukudome.  The crowd went crazy and Rokko Oroshi was sung by all.  A bit later in the inning, the captain and one of the longest running players on the team, Toritani, came to bat.  He got a good hit and it went far into the right field.  Since I was behind centre field, I couldn’t see the ball, so I watched the crowd and once they started to roar, my section screamed with them.  It was a homerun!  The Tigers were back in the game and down by just 1 run. 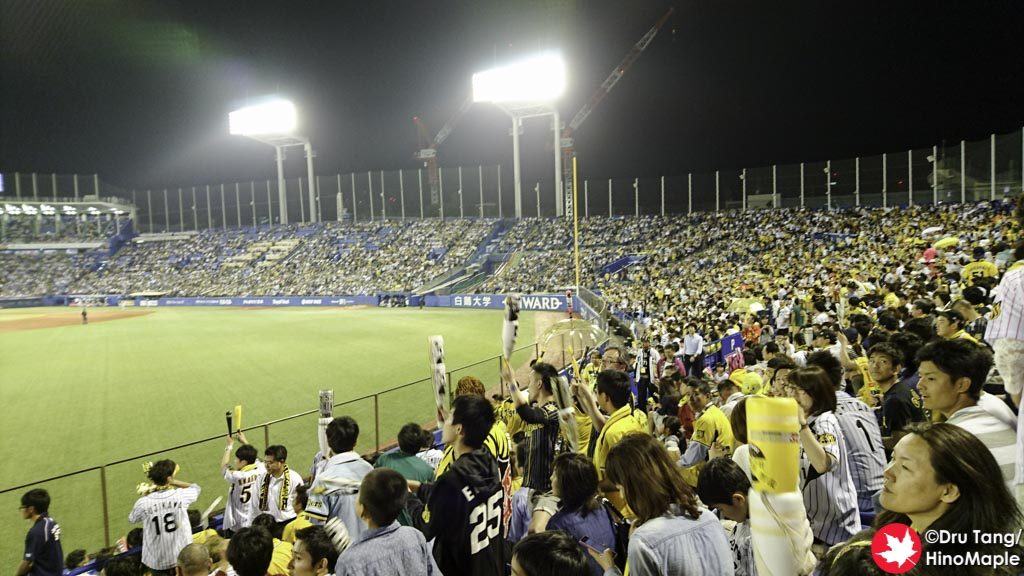 As always, the Tigers fans belted out Rokko Oroshi in the middle of the 6th inning.  I don’t remember if they played it on the speakers before but this time Meiji Jingu joined in the fun and played Rokko Oroshi on the speaker system.  The only problem was that the crowd was terrible in singing with the song this time and fell out of unison a couple times.  It was funny to see, but I think it was more to do with the speaker system than anything else.  Usually there is no problem when singing it after a run comes in. 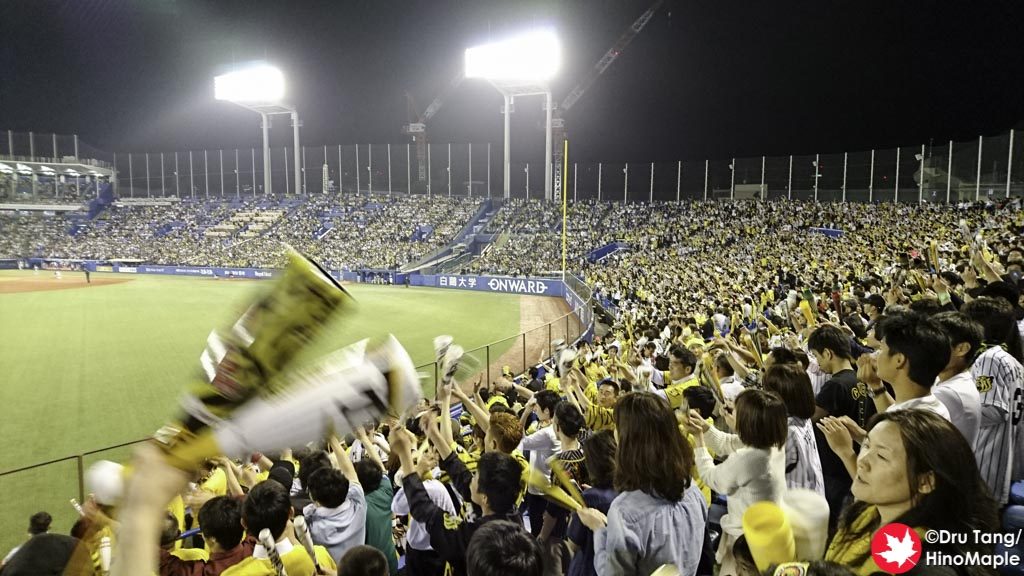 The crowd sings Auld Lang Syne and says sayonara to the Yakult Swallows pitcher as he is replaced.

The end of the game was just as eventful.  In the 8th inning, the Tigers scored another run to tie the Swallows going into the 9th.  Unfortunately they couldn’t get a run in the 9th and the Swallows had the last bat.  They had a sacrifice run and scored a final run to put the Tigers out of the game.  It was a crushing defeat after a terrific comeback but the Tigers still lost. 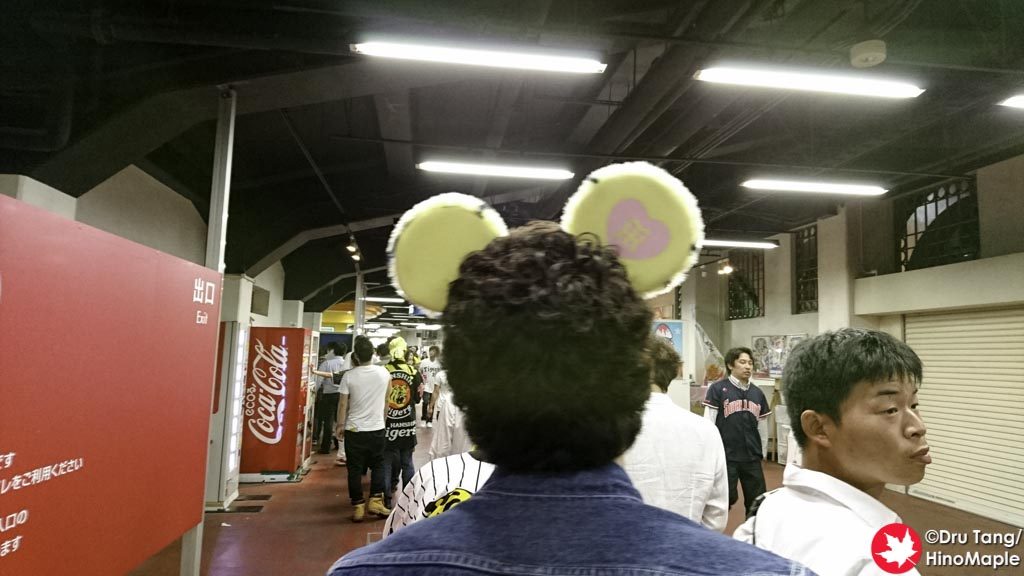 It was actually the longest game that I had ever attended coming in at about 4 hours.  Usually games are only 3 hours.  The game started at 6 and didn’t finish until 10.  I was surprised at the end and pretty tired from all the cheering.  If there is one thing to be mindful, you sometimes need to conserve your energy when watching these games.  It was still a lot of fun with a lot of runs, but the next day I had a little trouble waking up after all the fun. 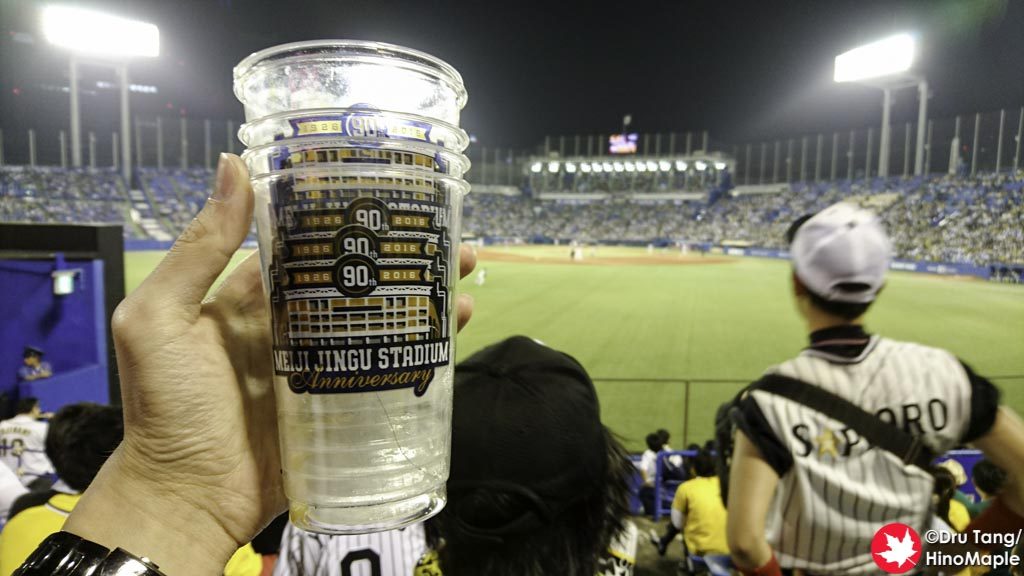 The damage for the night. 😉

Japanese Baseball (Yakult Swallows VS Hanshin Tigers) (2016) is part of a series of posts on baseball in Japan and my experiences going to various games.  To read more about other games I have experienced, continue with the posts below: