Tokyo has had a “Robot Restaurant” since around 2012 and it has made its home in Shinjuku’s Kabukicho.  I have heard about this place since they opened and after seeing various videos of it, I knew that one day I had to go.  When my brother visited in the summer of 2015, there was no way we would miss it.  The Robot Restaurant was not what I expected; it completely blew my mind away! 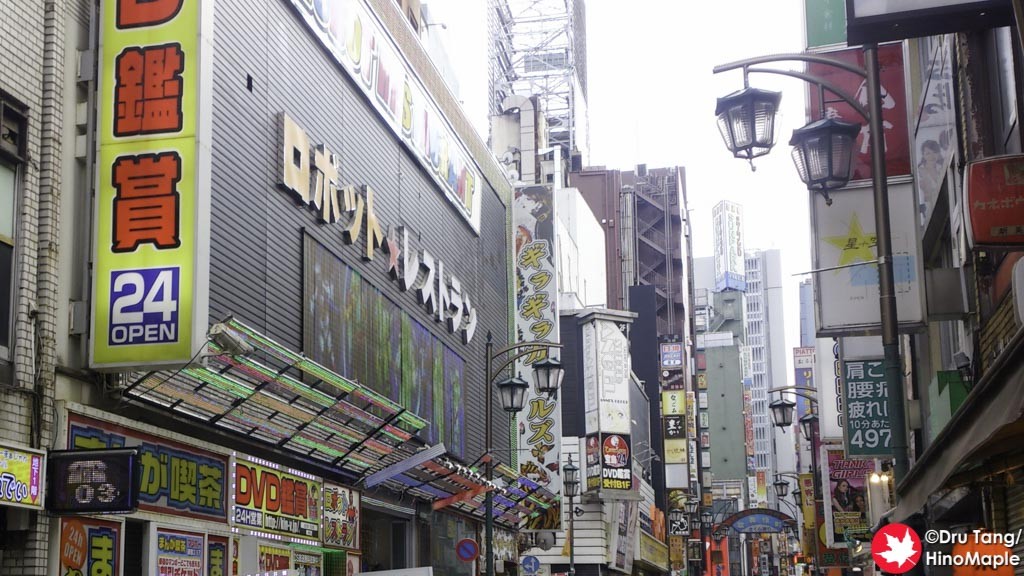 The first thing you need to do is get tickets. Tickets are expensive, with original pricing at around 4000 yen when they first opened.  The popularity of the Robot Restaurant meant that they were able to boost the price to 7000 yen.  I can see them increasing this to up to 10,000 yen in the future but they may be hurting themselves.  Was it worth 7000 yen?  It was worth it for a onetime event, but if you asked me to go multiple times a year, I would say no.  Also note that not everyone will like this crazy place as it is far from traditional. 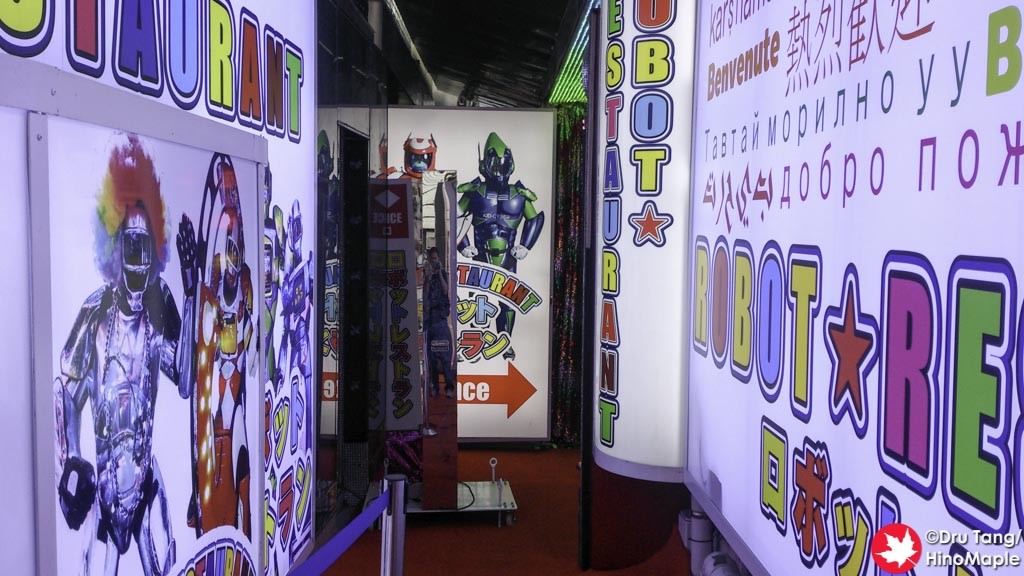 Heading into the Robot Restaurant

If you are looking to get night time tickets, especially on the weekend, you had better make a reservation.  I went on a weekend afternoon, the 4pm show, so the theatre was only half full.  I got there 30 minutes early, as they recommended and met with someone outside.  For the first show, they have people come out and take your information before you head inside to get tickets.  The ticket centre is actually in a different building to the actual Robot Restaurant, but this just helps with the logistics as the place is very busy. 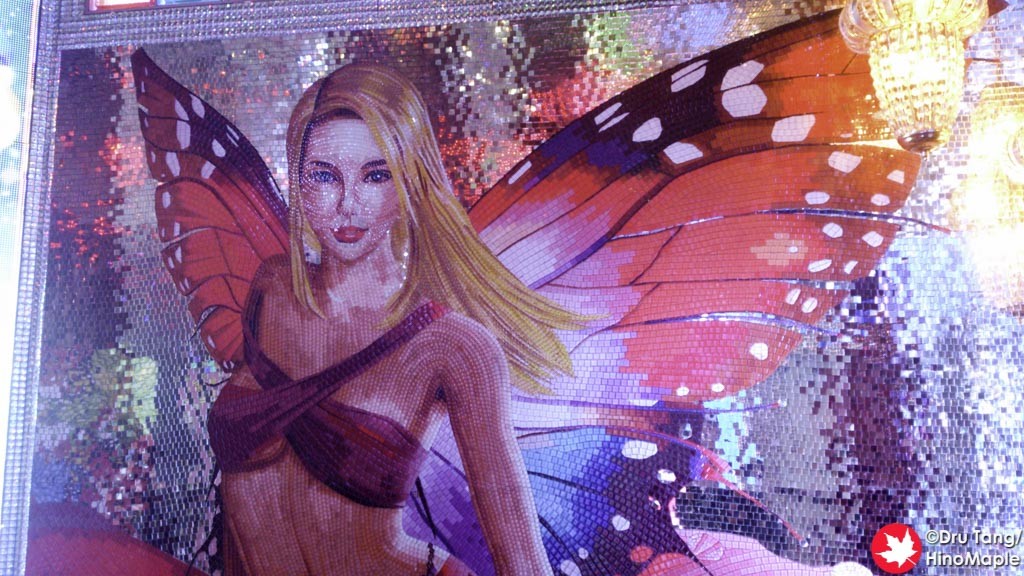 Entrance to the Robot Restaurant

Once you get your tickets, you head to the Robot Restaurant building, which is just across the street.  There are signs pointing you in the right direction but if you are not paying attention, it is possible to go the wrong way.  There are lockers in the ticket room, but unless you have a lot of bags, you don’t really need it. 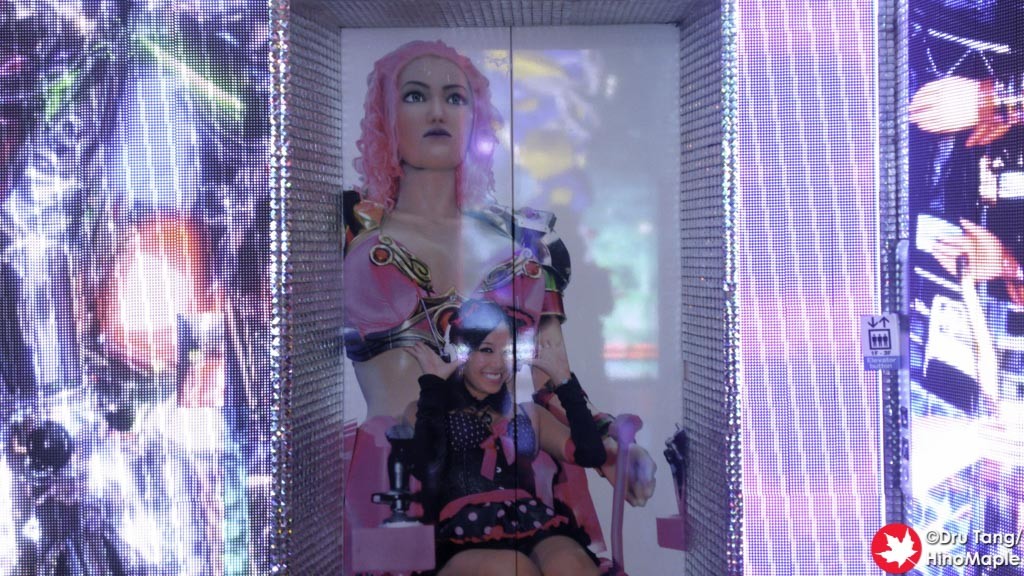 Elevator to the Robot Restaurant

The Robot Restaurant is on 2 separate floors.  The 3rd floor is where the waiting room is.  If you arrive during one show, you can spend more time there.  It is pretty spacious and can hold a lot of people.  The second you get to the elevator waiting area on the first floor, you immediately understand what you are getting yourself into.  The entire place is full of bright lights, flashing lights, and a complete sensory overload. 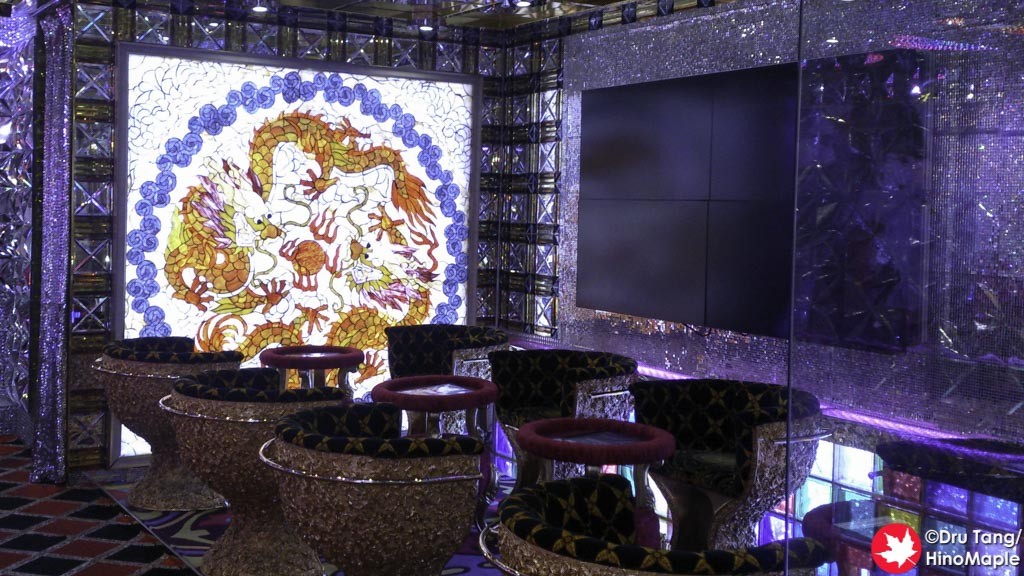 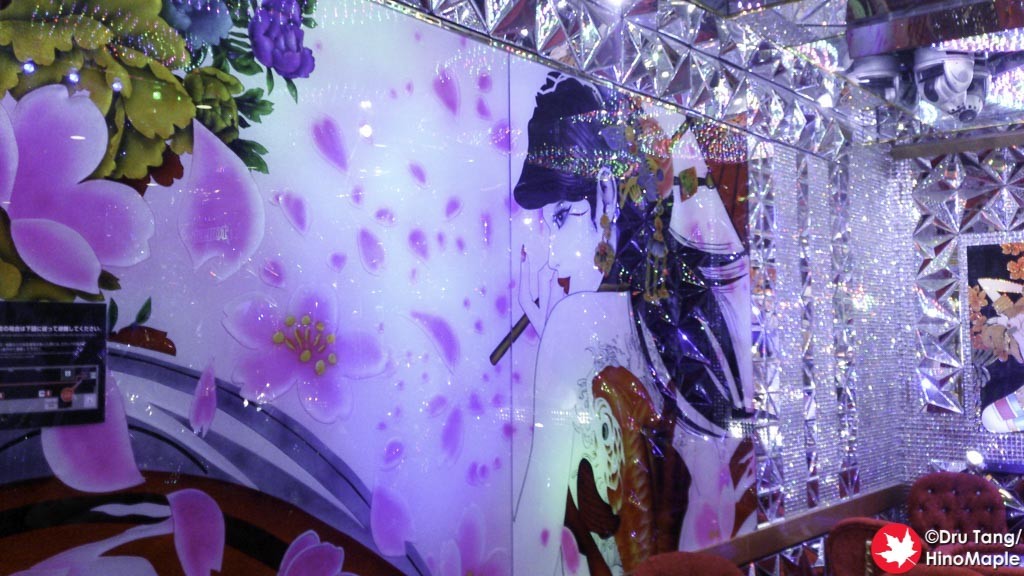 The 3rd floor waiting room is a really nice place overall.  There are a lot of double seats that look like a large conch shell, but there are also other regular chairs and a standing area.  There is a bar next to the elevator where you can get beer, simple cocktails, and other drinks and snacks.  At the back of the room is the smoking room and washroom.  The washroom is really crazy and if you thought you could go there and get a break from the lights and gaudy looks, you are mistaken. 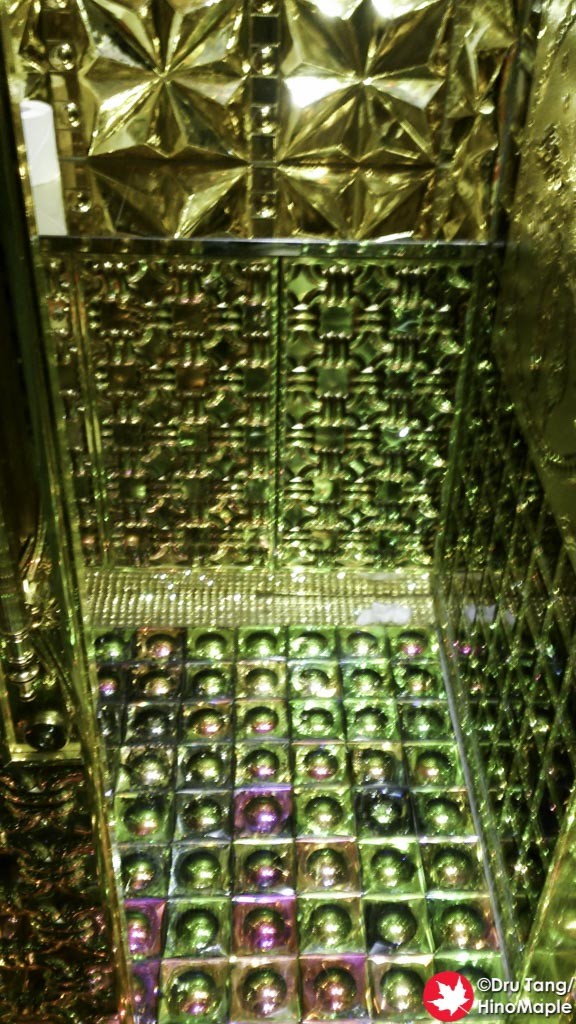 Washroom at the Robot Restaurant 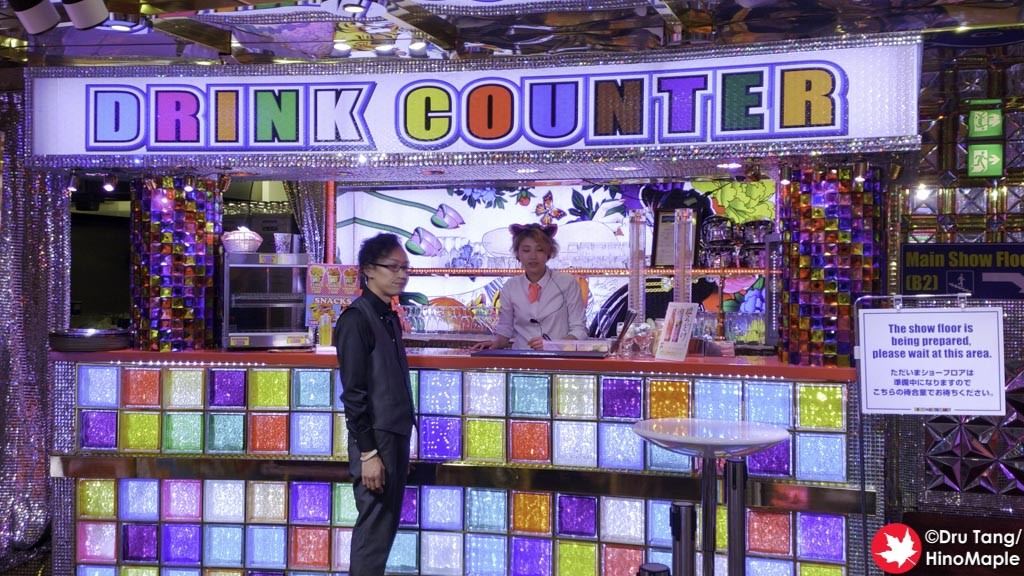 Bar of the Waiting Area

While you are waiting for the show to start, they often have a small show.  When I entered they had a little jazz, honky-tonk, and classical music.  They had some really interesting guys dressed as robots, in the essence of Daft Punk but cheaper, and a few girls in sparkling silver dresses.  When the show is about to start, they usher everyone to the stairs where you proceed to walk down to the second basement (B2) where the real show starts. 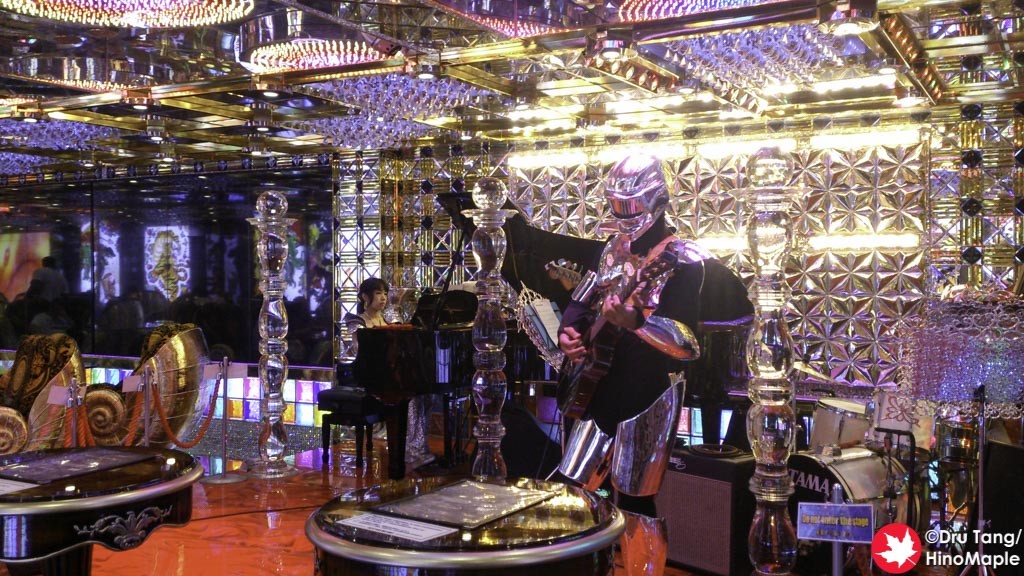 Entertainment in the Waiting Area

If you ordered a bento lunch, you will be given this when you sit down in the theatre.  The Robot Restaurant is more theatre than restaurant.  The waiting area is closer to a bar than a restaurant but I would rather eat in the bar than the theatre.  The theatre is pretty dark and most of the area is black.  The entire area has a main central floor with seats like a football stadium.  There is also a large screen that spans the entire theatre that is constantly on. 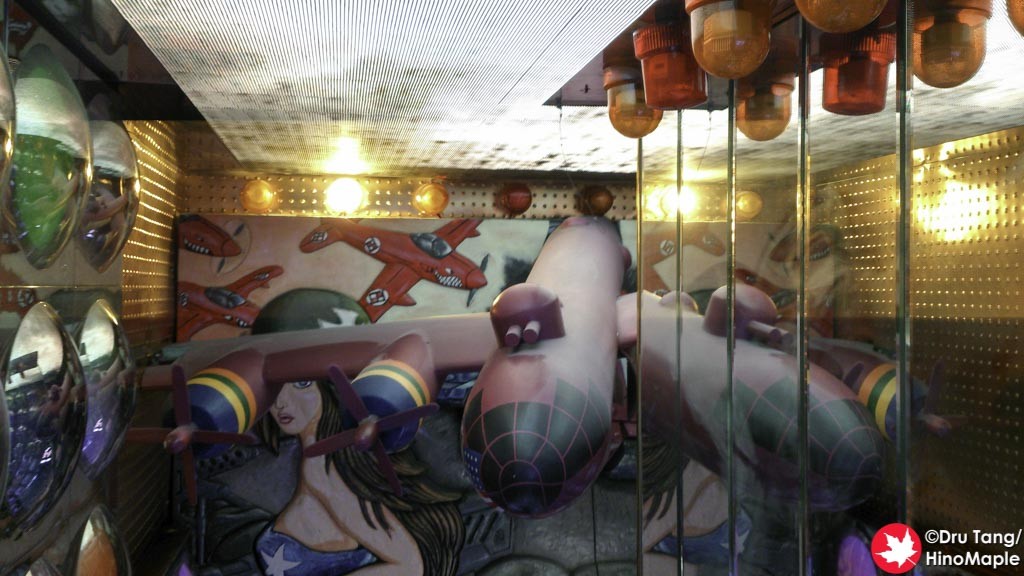 Heading down to the Theatre

Once you find your seat, they start to sell a variety of items.  They have the standard fair food such as cotton candy and popcorn, but they also sell bentos, in case you forgot to buy one.  The bentos don’t really look great, and at 1000 yen don’t seem to be worth it.  The drinks are reasonable for the place but I really didn’t need it.  There are several breaks to sell drinks and snacks as the performers get ready for each session but you can just use it to relax and rest your eyes. 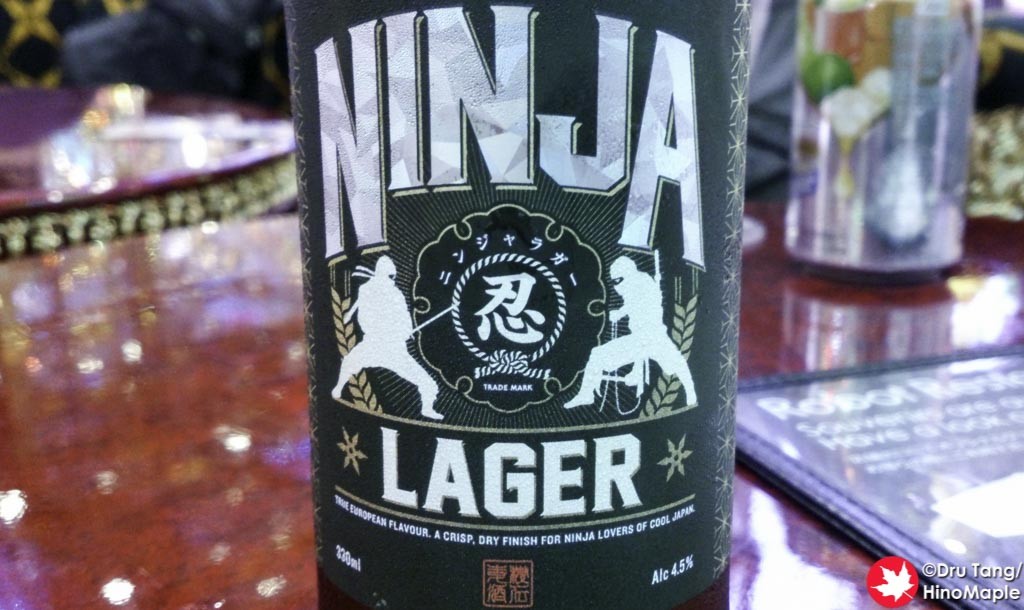 The entire show is split into 4 basic acts, although the last act is not really a performance per se.  The first act is a great introduction to what is going to happen.  The best way I can describe it is as a modern take on taiko and kabuki.  The men are dressed in costumes that remind me of kabuki, and the women look akin to various festivals held around Japan.  Of course the costumes are unique, modernized, and crazy.  They start with basic taiko drumming and they are on various platforms that are moved around the theatre.  It is insane, to say the least. 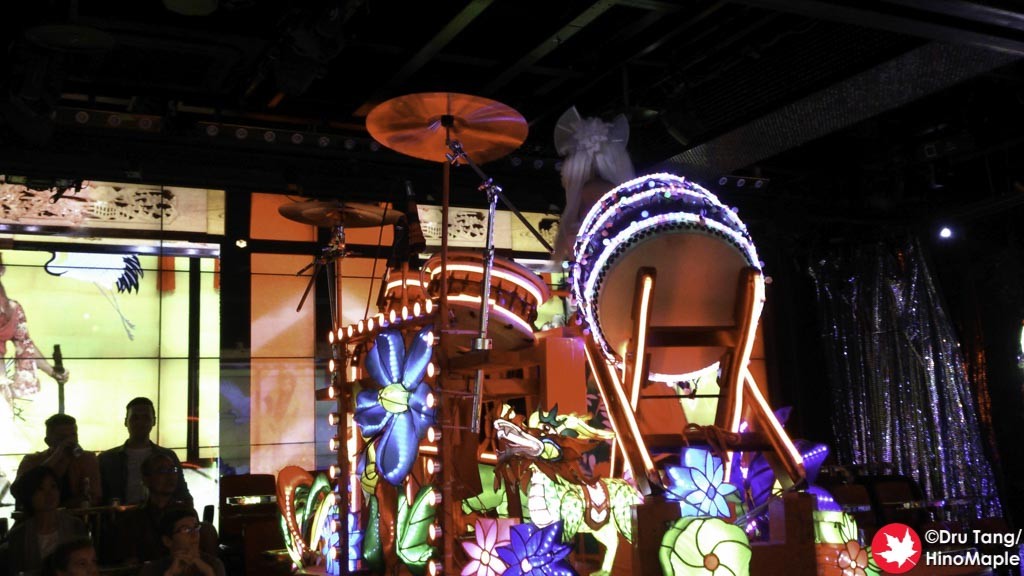 Between acts, the performers need a little break because they are going all out.  Between the first and second act, they bring out a chain fence to protect people.  The second act is the most “dangerous” so they need to make sure everyone is aware of things.  Because the machines are going to be moving around, they make sure everyone is aware that they could get hit in the head.  If you are in the front row, be ready to duck in the second act at times.  Once everything is secure, and everyone knows what will happen, the second act gets started. 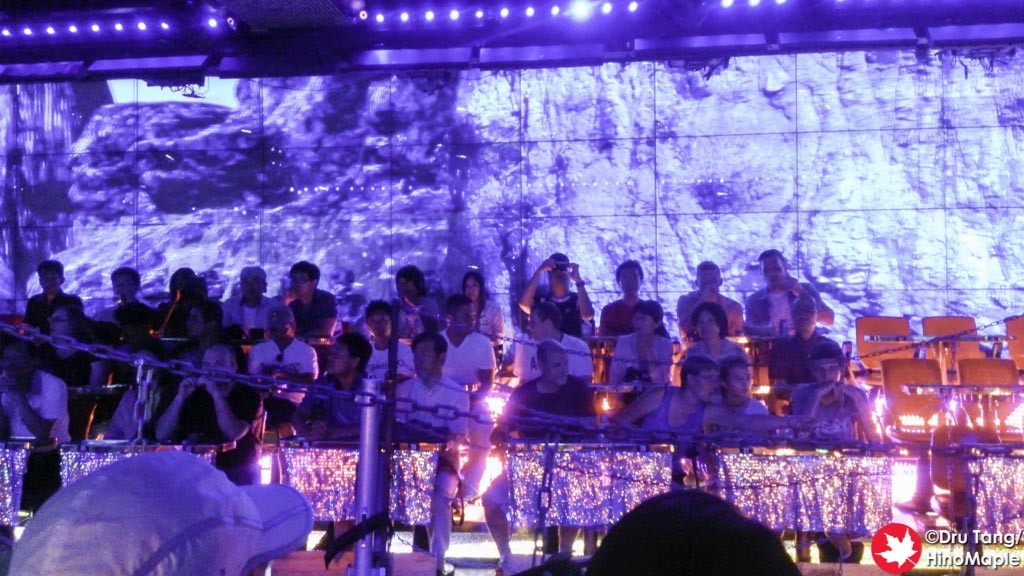 Fence for Protection before Act 2

The second act is a very Power Rangers/Pokemon/Zentai Ranger story.  It is a fight between good and evil, and like the Power Rangers, there is a constant back and forth as the forces of good defeat the forces of evil, but then they lose to a stronger force of evil, and the cycle returns to the beginning as that stronger force of evil is defeated by a new, even stronger, force of good.  This continues for several rounds and you see various characters get defeated.  It was comical at times and things kept getting grander and grander.  It was simply amazing at how well they could work together in such a confined space. 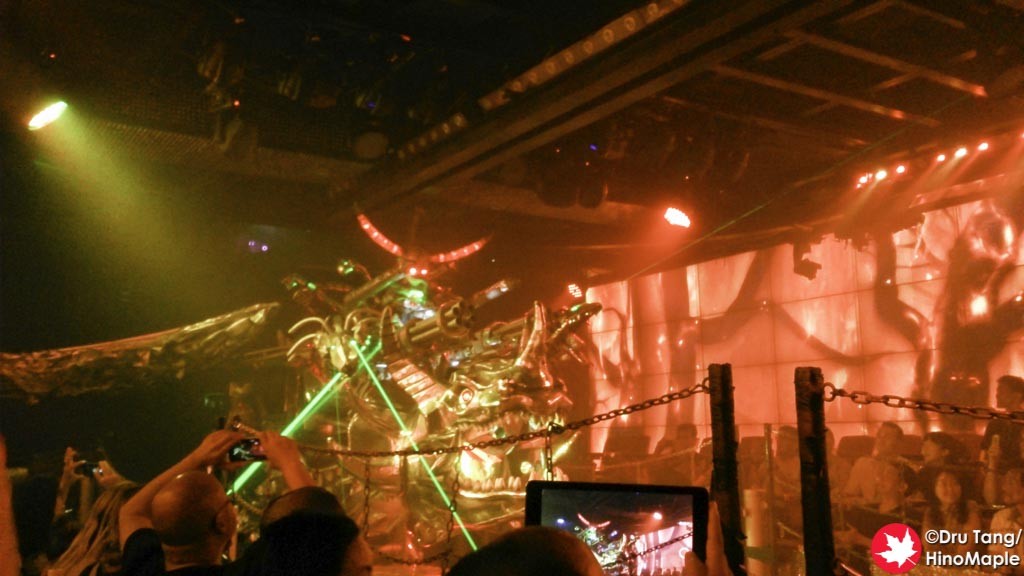 Forces of Evil in Act 2

After the second act is the halftime.  Between each act they continue to sell popcorn and drinks, but in the halftime period they have a small clown show.  They have a couple guys come out and do some dancing while also having a quick draw for someone to win popcorn.  While I didn’t win, the person next to me did, and they decided to give me the popcorn instead.  Since his family was there, I ended up leaving it on his side of the table. 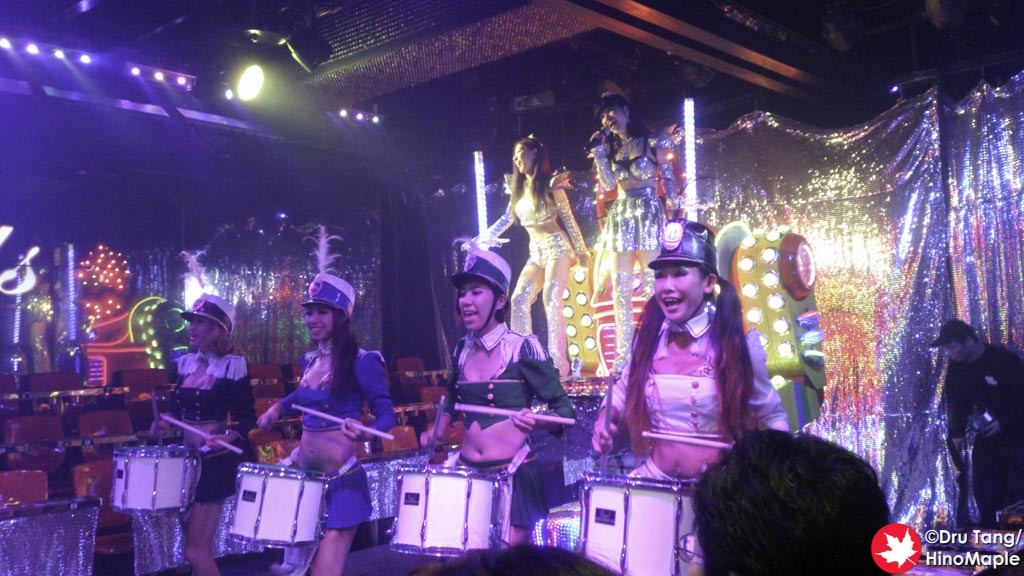 The third act is what most people think of when it comes to the Robot Restaurant.  I would assume that this is what the Robot Restaurant did during the first couple years of operation. There is nothing I can do here that can help you understand what is going on.  It is all just a crazy mess that really made you go crazy, in a fun way.  There were robots, girls, guys, dancing, and people zooming around on Segway like people movers.  Lights were flashing in all directions, and the music was blaring.  No matter what I say, you can’t understand what it is like until you actually go there. 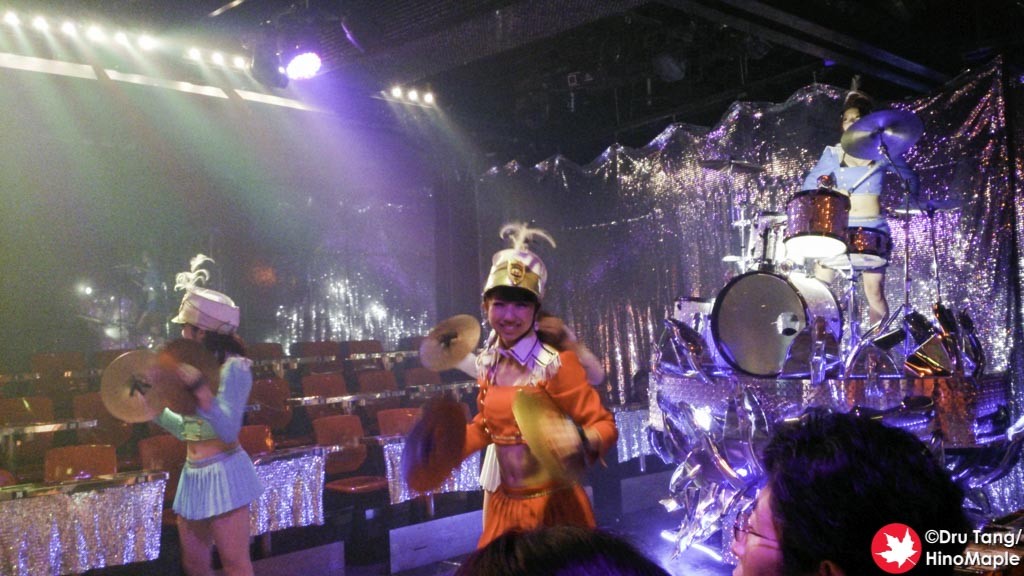 In Act 4, you basically get to meet all of the girls in the show.  They all come out marching to a beat and having fun dancing in front of you.  They highlight each girl and they all do a small dance.  One of the girls did a little break dancing which was really cool. 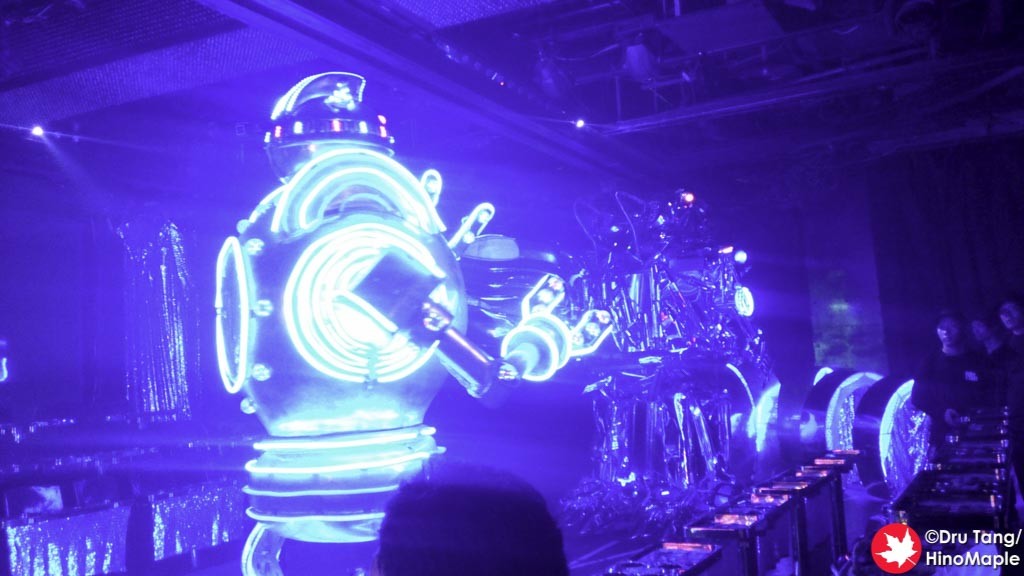 When all is said and done, the girls head back to their rooms and you head back up to the ground floor.  When you get outside you can also buy T-shirts and a few other souvenirs if you want.  The entire show is very much like a modern cabaret, but it is so much more than that.  I was really entertained and felt I got my money’s worth.  I don’t know if I will be back again anytime soon, but I do believe that they change the story line from time to time. 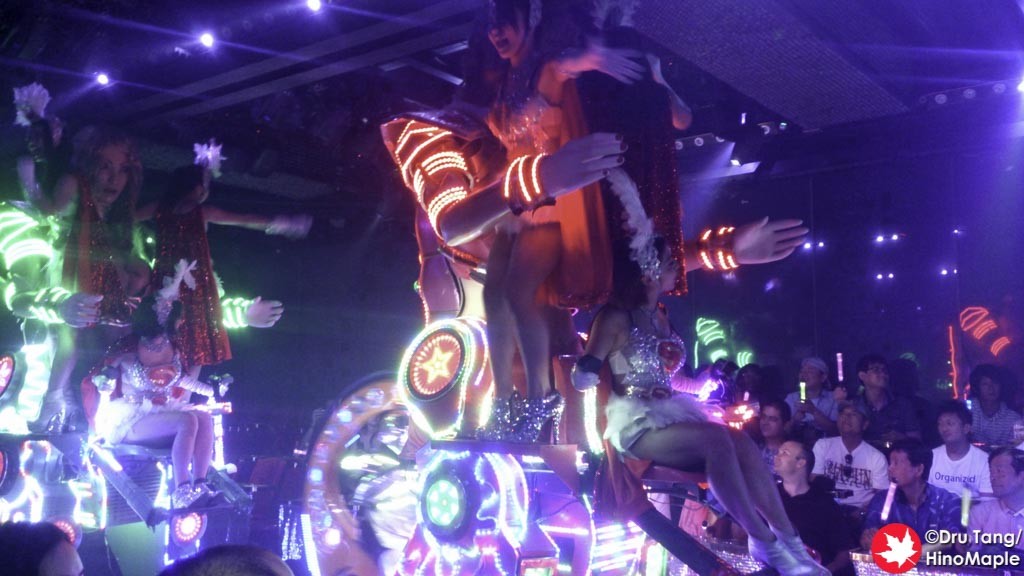 You may also be wondering why there are so many acts, and it may seem like you spend a lot of time just sitting around.  They really do their best but when you see all of the machines that are used, you can understand that it does take time for them to get set up for each act.  They also need time to change outfits and catch their breath.  The girls really go all out and it is nonstop for them once they hit the floor.  You can even see it in their breath. 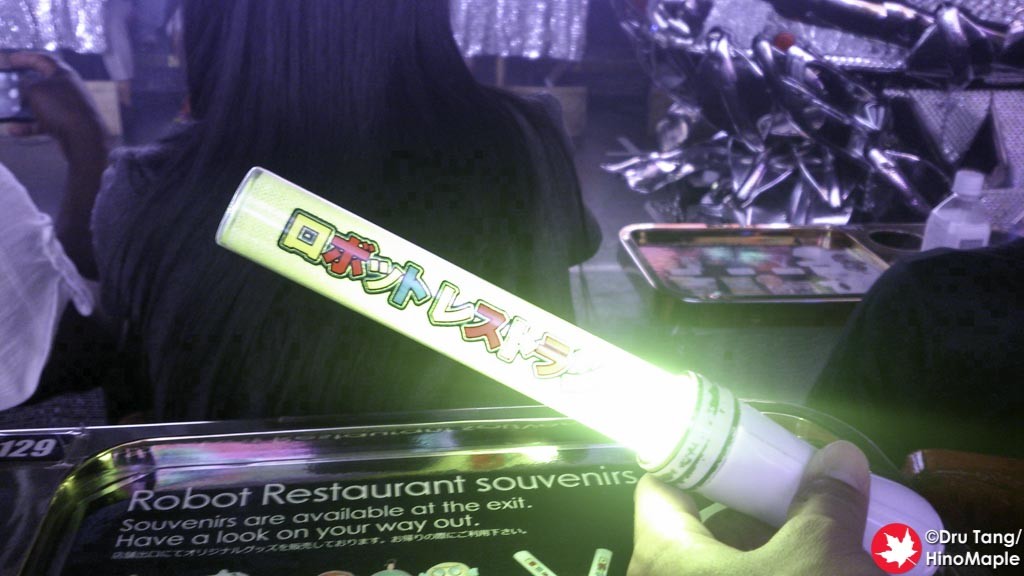 Light Stick for the last 2 Acts

Is the Robot Restaurant for you?  That is a really difficult question to answer.  For some, the quick and simple answer is no.  This is especially true if you are a feminist as you will probably feel as if the women are being objectified.  If you love the crazy side of Tokyo and want to see a somewhat modern take on traditional Japan, this is a really good place to go.  There are a lot of WTF moments but as a person who has lived in Japan for 10 years, I can see some of the throwbacks to traditional Japan.  Personally, I loved it and felt it was worth it for me.