Recently, the Saviour has been into football and I have been joining her in visiting various stadiums around Kanto.  She is a fan of Omiya Ardija and whenever she goes to a new stadium, I am often up for going with her.  On Sunday April 24th, I had plans to play sports in Yoyogi Park but that was cancelled due to rain.  Since it was cancelled, I decided to join the Saviour in heading down to Shonan to see Shonan Bellmare play Omiya Ardija. 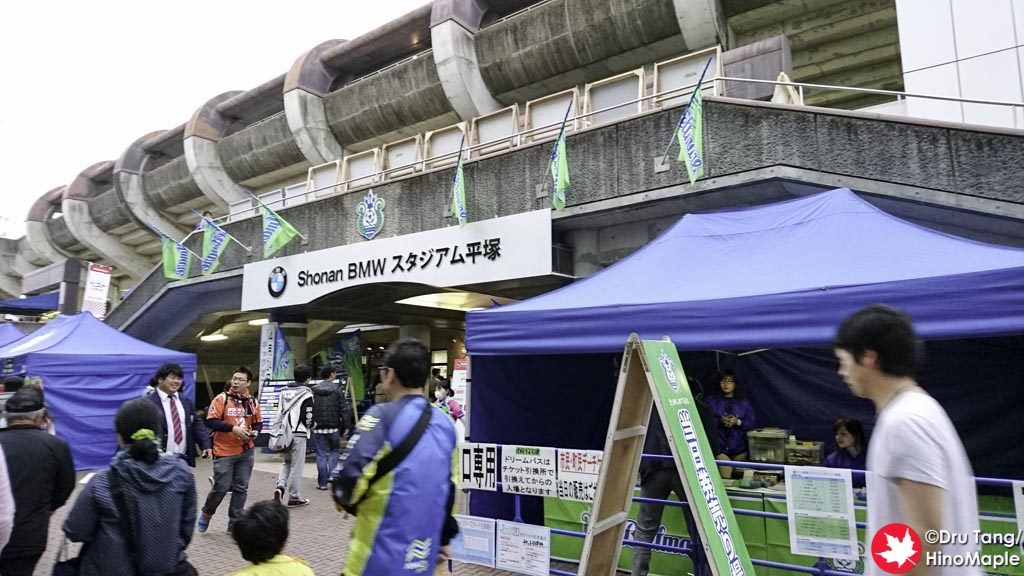 Getting to Shonan is pretty easy from Tokyo and there are two main ways to get there.  Shonan Bellmare plays at Hiratsuka Station at the Shonan BMW Stadium Hiratsuka.  Hiratsuka is on the Shonan-Shinjuku Line as well as the Tokaido Line, so whether you are on the east or west side of Tokyo, it is pretty easy to get there by a single train.  If you are wondering, Hiratsuka is a little west of Kamakura, so it takes a little over an hour to get out there. 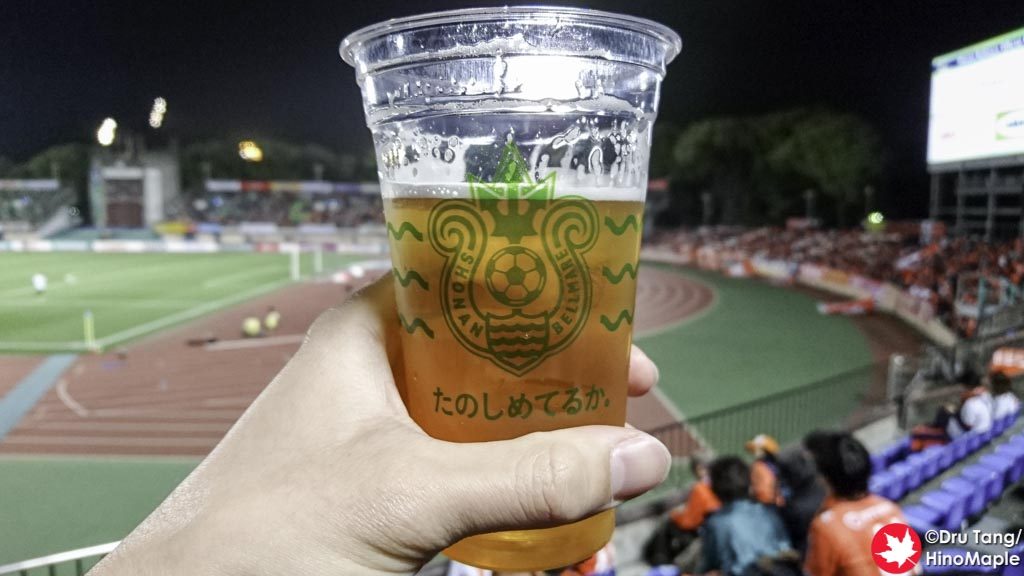 Once you get to Hiratsuka, you have to find your way to the stadium.  It is a good 20-30 minute walk to the stadium or you can take the shuttle bus.  If you head out of the East Exit, on the north side, go to bus bay 11 for the shuttle.  They leave every 10 minutes or less.  Generally, if the bus is full, they take off.  It costs 180 yen for a trip but it is worth it when you are heading there.  Coming back may not be worth it as the lines are really long. 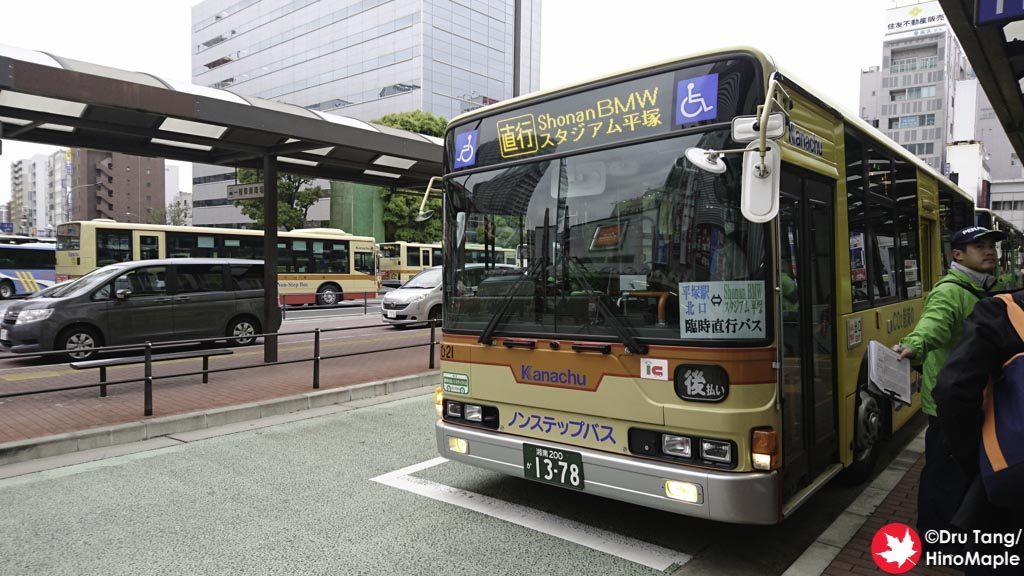 BMW Stadium is located inside a large park.  I couldn’t decide if I wanted to go or not until the last minute so I bought my ticket in Tokyo and headed down and got there with just an hour before the game.  The park is really big and there is a lot to do.  If you want to enjoy eating and relaxing in a beautiful park, this is the place to do it.  A lot of fans were there just enjoying themselves and the lines to get food from the food trucks were long.  If I ever head down again, you can be sure that I will try to go early and eat a late lunch there. 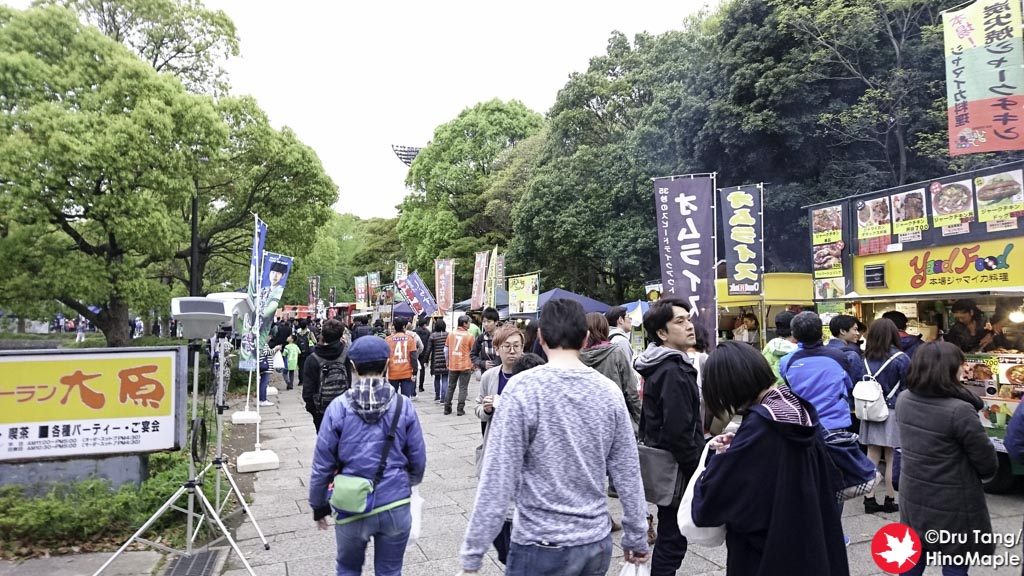 Food Park outside the Stadium 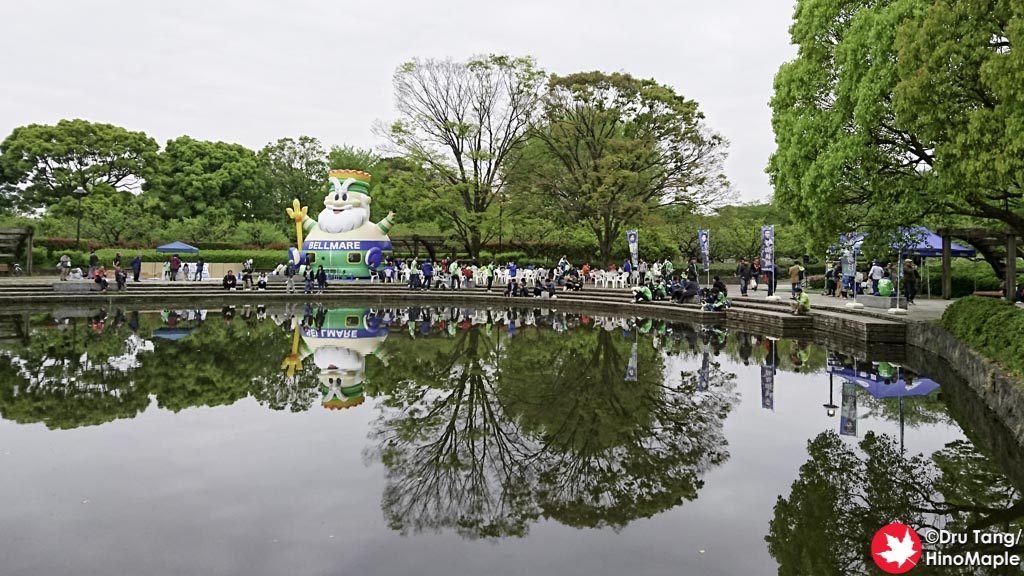 The stadium itself is pretty small, and not very good to be honest.  It is a multipurpose football stadium with a track around the pitch.  The seats are a little far from the pitch so the views are not very good.  NACK5 Stadium in Omiya is much better than BMW Stadium.  The stadium is also split into sections and you cannot walk around the entire stadium without having to exit and enter each area.  The supporters behind the goals have their own entrance, the main stands have a central entrance, and the back stands are split in two.  I wish I could have walked around the entire stadium but that was impossible.

View from the Free Seating Area (Away Side)

The game itself was a little difficult to see as I was behind the corner of the pitch.  I was able to enjoy the game but when they were at the far end I really couldn’t see very well and had to guess the angles.  Thankfully a lot of action happened in the end that I was sitting and it was still a lot of fun to watch.  Shonan Bellmare did put up a good fight and had a couple good chances but nothing great.  They had a great defense but they tended to crowd the ball with several players.  Omiya did a better job at stealing the ball midfield and trying to convert on these chances. 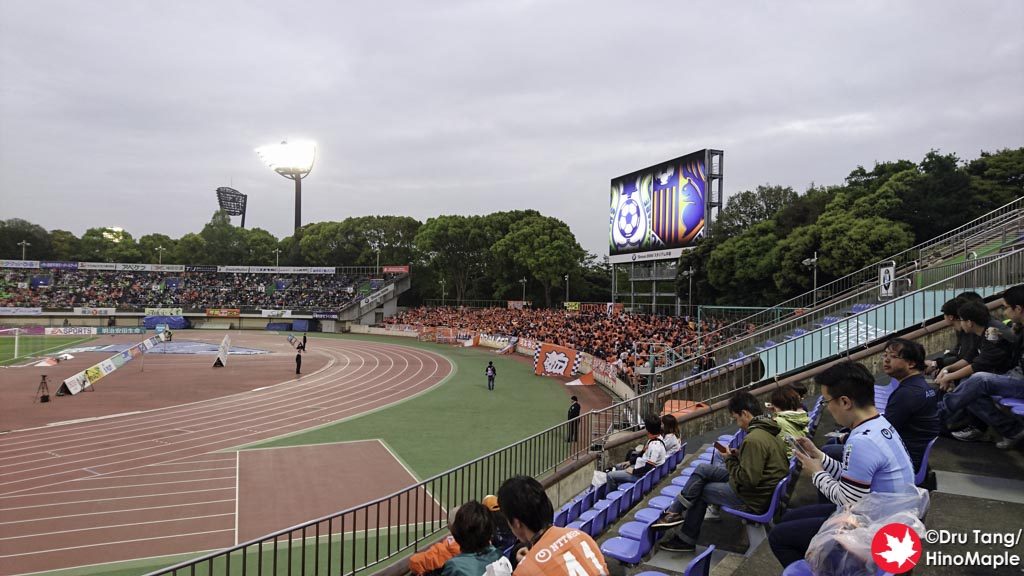 The game was pretty boring in general until midway in the second half.  Omiya Ardija was fighting hard and passed the ball into the centre with a big crowd of players.  The dreaded handball happened with so many players from Shonan crowding the goal.  With a penalty kick, Omiya scored the only goal of the game. 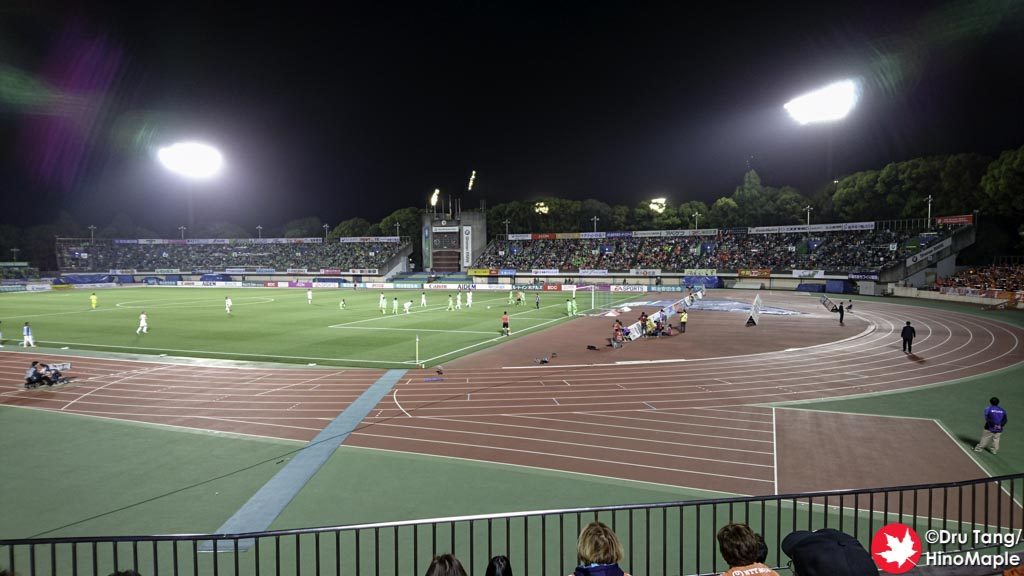 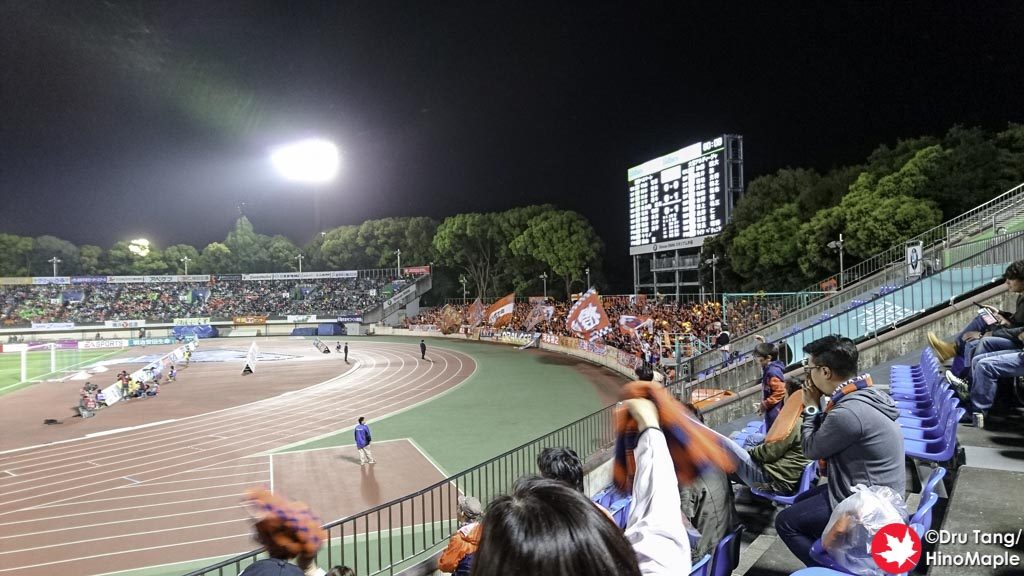 GOAL! And the crowd goes crazy!

At the end of the game the fans stayed around a little longer and the players said thank you to the supporters.  They all gathered around and sang a victory song before the players left for the dressing room.  The dressing room was under the seats in the corner, where I was sitting, and it was fun to see them all head off the pitch right below us.  All of the fans in the area were cheering them and thanking them for the hard fought game. 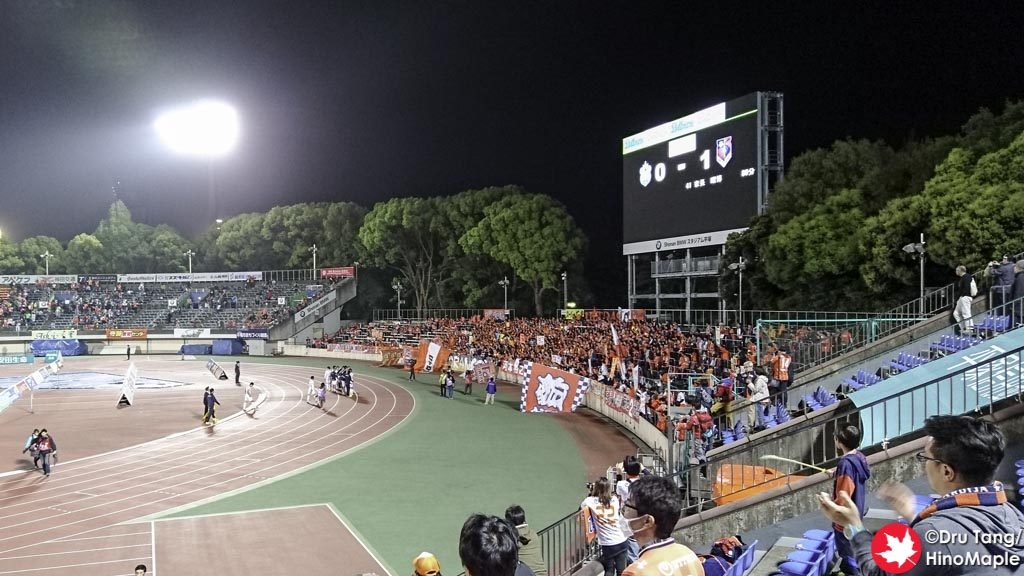 Victory Song for Omiya Ardija Fans (Note: They all crowded together to sing)

Shonan Bellmare is a great team to watch, even though they haven’t won a single game this year, as of this game.  They have the best colours of any team, green and blue, which is the same colours many teams in the Pacific Northwest sport.  Unfortunately I was in the orange section, Omiya Ardija.  I enjoyed the game a lot and felt it was fun to head down there.  I think it would be a great place to enjoy an afternoon game and it isn’t too far from Tokyo.  If you make a day of it, it would be a great place.