On March 20th, I took some time off to head up north to Omiya in Saitama Prefecture.  It was a venture to watch football in person for the first time in about 3 years.  For the past 3 years I had been too busy and with the J League schedule scheduling most J1 games to Saturdays, my typical work day, I haven’t been able to see a game till now.  Thankfully this weekend was a long weekend and they decided to have a couple Sunday games. 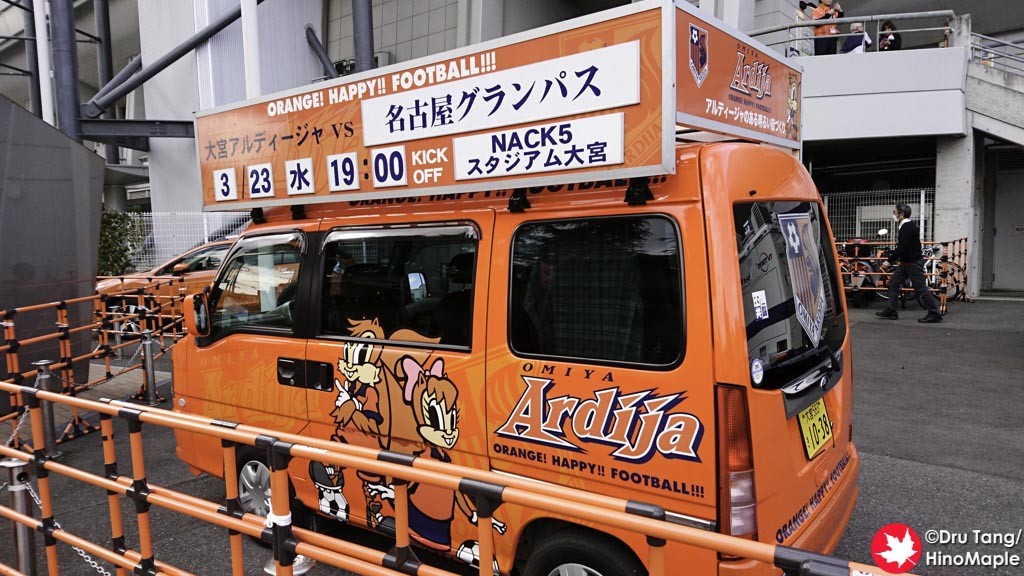 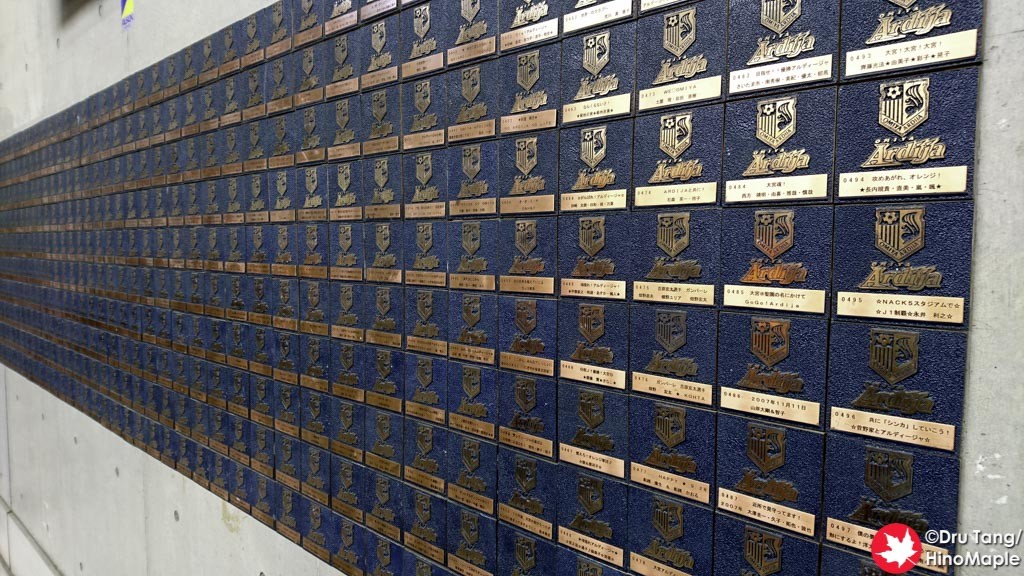 Players Wall at the Stadium

Getting to Omiya is not really difficult.  It is one of the biggest stations in Saitama and they even have a Shinkansen stop.  If you do take the Shinkansen, you will only save about 10 minutes on your trip, and it may actually take more time depending on where you are departing from.  I took the regular trains from Ueno and it really doesn’t take a long time to get there.  Once you are at Omiya, you have to trudge out to the stadium, and it can take around 20 minutes to walk there. 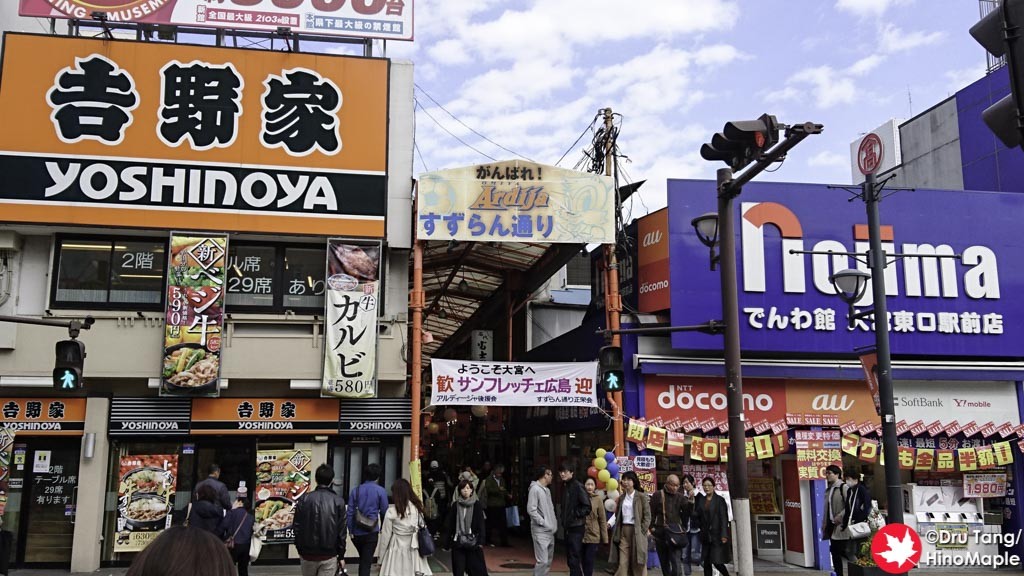 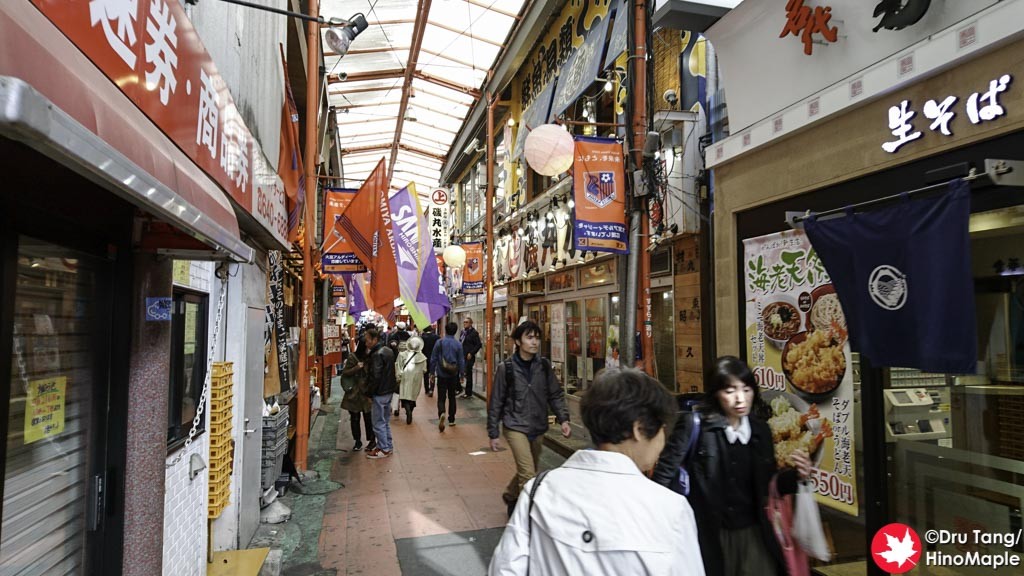 Omiya Ardija plays in the Nack5 Stadium Omiya and it can be difficult to know where to go if you don’t have a map.  It is pretty easy once you get your bearings but if you head out of the east side exit of Omiya Station, look to the left side of the main drop off area.  There is an easy way to know where to go and that is simply to look for the Ardija sign at the top of the shopping street entrance.  If you walk down Suzuran-dori, just walk to the end of the street, turn left, and then turn right at the light.  Most of the fans will be going this way so it is easy to know if you are going the right way or not.  By the end of this street you’ll be near the entrance to Hikawa Shrine. 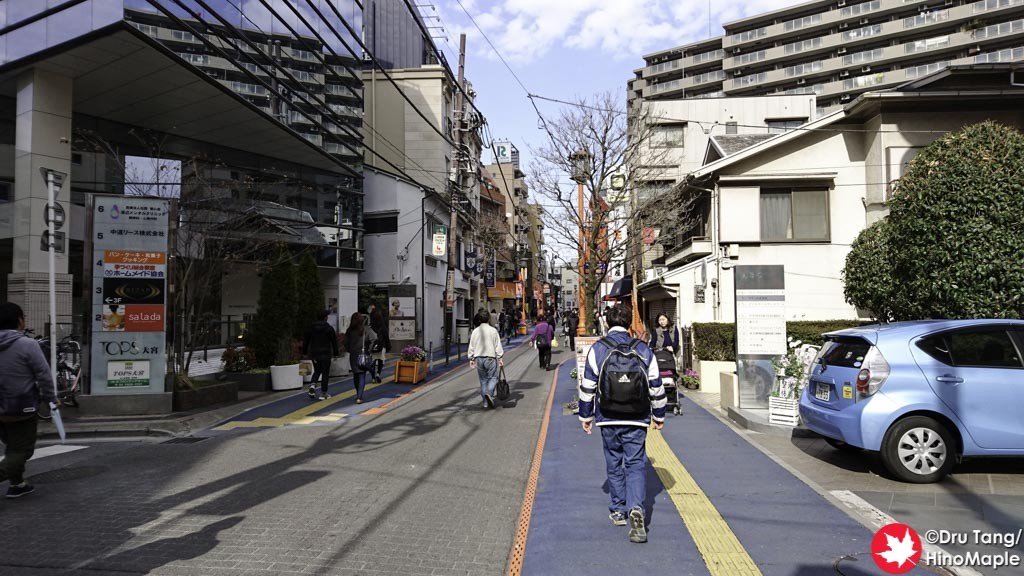 Heading to the Stadium

At the main road to Hikawa Shrine, there is a small fan shop called Orange Square.  If you want to get all of your fan goods, this is the best place to do it.  The lines are long on game days so you are best to go early.  There are other merchandise shops at the stadium but they are similar to what you would find in the Orange Square.  Once you get to the entrance of Hikawa Shrine, head right along the small road and just follow it to the stadium.  The stadium is really easy to see so it shouldn’t be hard to find it, and everyone will be going that way too.  It isn’t so easy to find at first but once you get there you’ll realize how easy it really was. 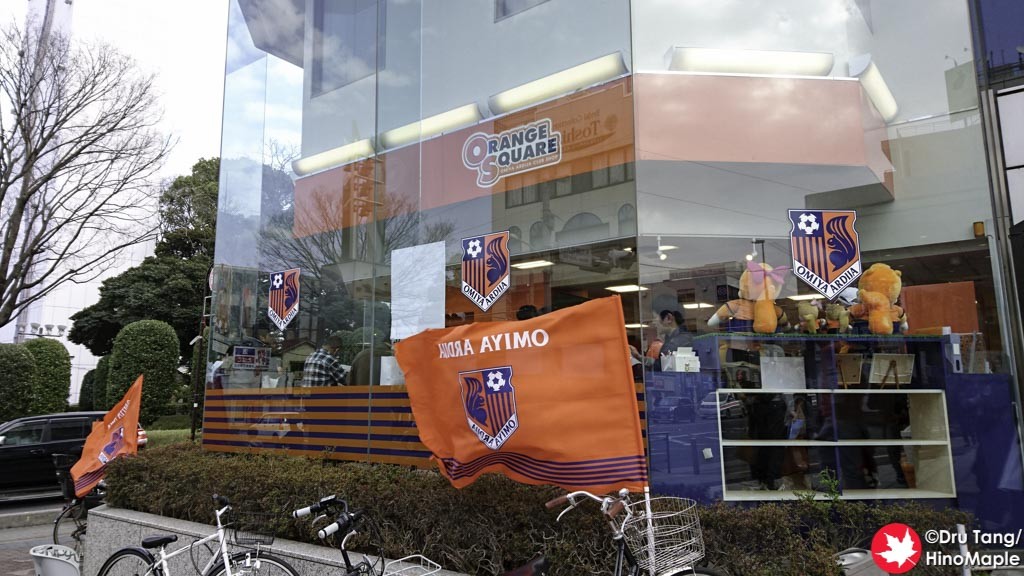 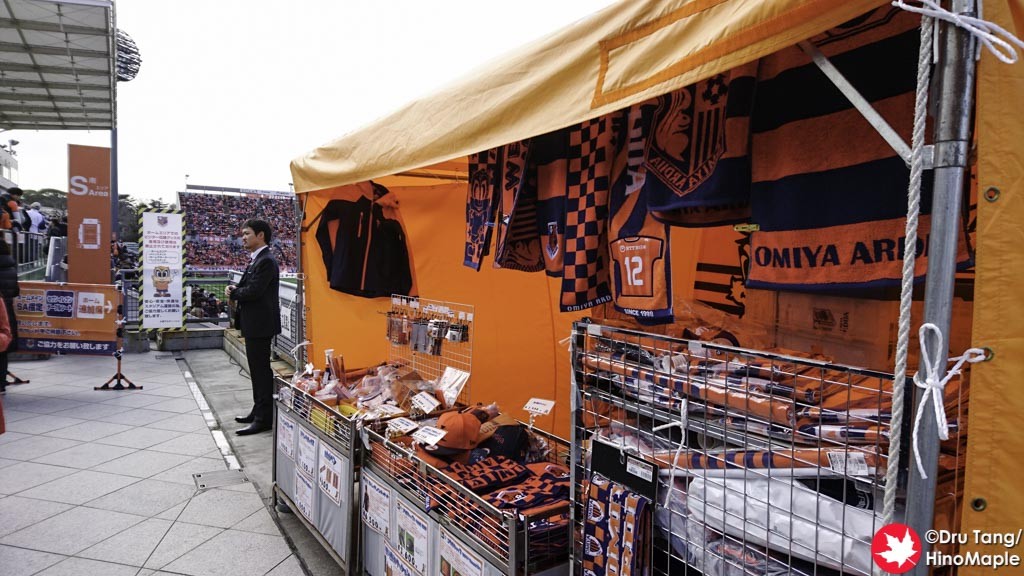 Merchandise at the Stadium

When you get there, there are 3 gates located at each corner of the stadium.  You need to know which one to enter but it is pretty easy to get around the stadium as it is pretty small.  Originally built in 1960, it has been renovated and expanded to what it is today and it is a good stadium overall.  It is still a small stadium with a capacity of 15,500 people, and for the Hiroshima Sanfrecce game, it was sold out. 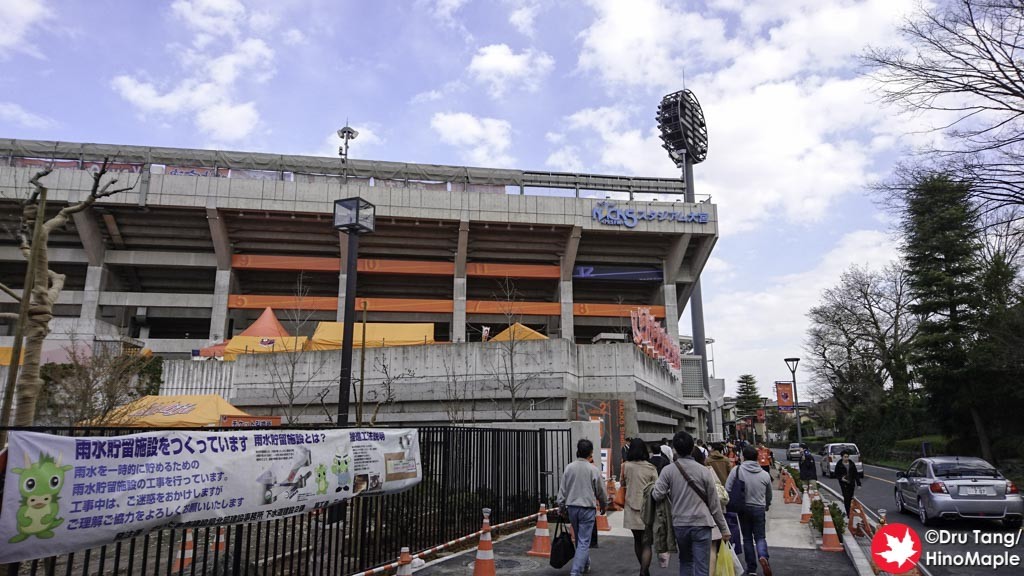 Looking for seats in the Nack5 Stadium was a little difficult.  Ardija is becoming popular these days and the stadium will probably sell out for good games really quickly.  The away side is pretty small with a few overflow areas.  Unlike the big teams, Omiya Ardija never had a big base of fans in the past, but with Hiroshima Sanfrecce being the top team last year it was easy to predict the game would be a sellout.  We ended up getting one of the last few seats in the most expensive section.  We were seated in the covered seating area (main side) near the centre line.  It was a good seat but I would have preferred to be on the back side where amenities were not as good but the fans more passionate.

View from my Seat

The entire stadium is small and the options for food are really limited.  Don’t expect anything in the way of great food and drinks but there is enough standard Japanese fare to keep you happy.  I walked around most of the stadium and while the options were decent, the facility was definitely not designed with 15,000 people in mind.  I ended up going to the southwest corner of the stadium where they collaborated with the Hub, a popular British style pub in Japan, because they had Bass Pale Ale.  For a craft beer guy, the Bass was way better than the Asahi offered everywhere else. 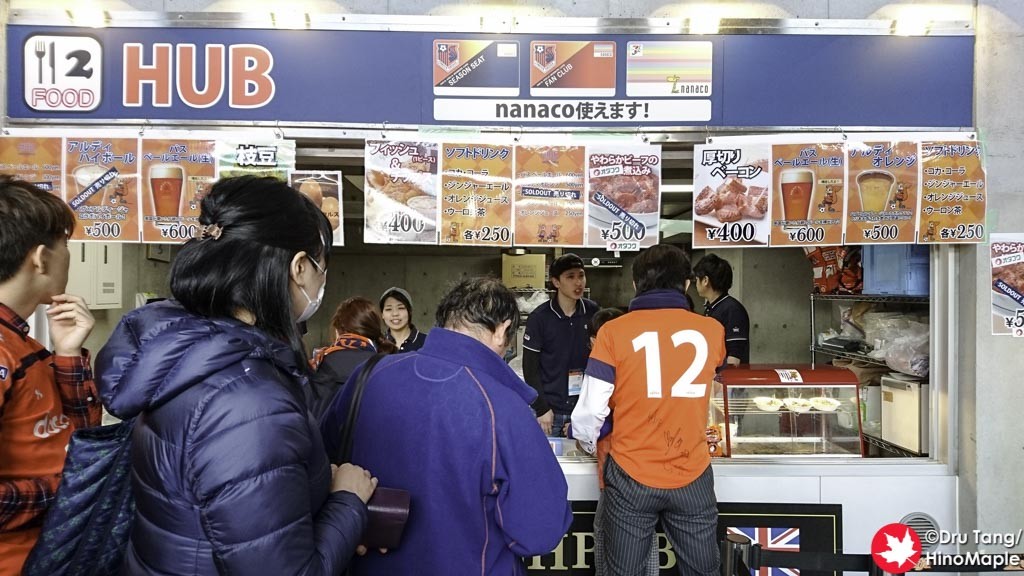 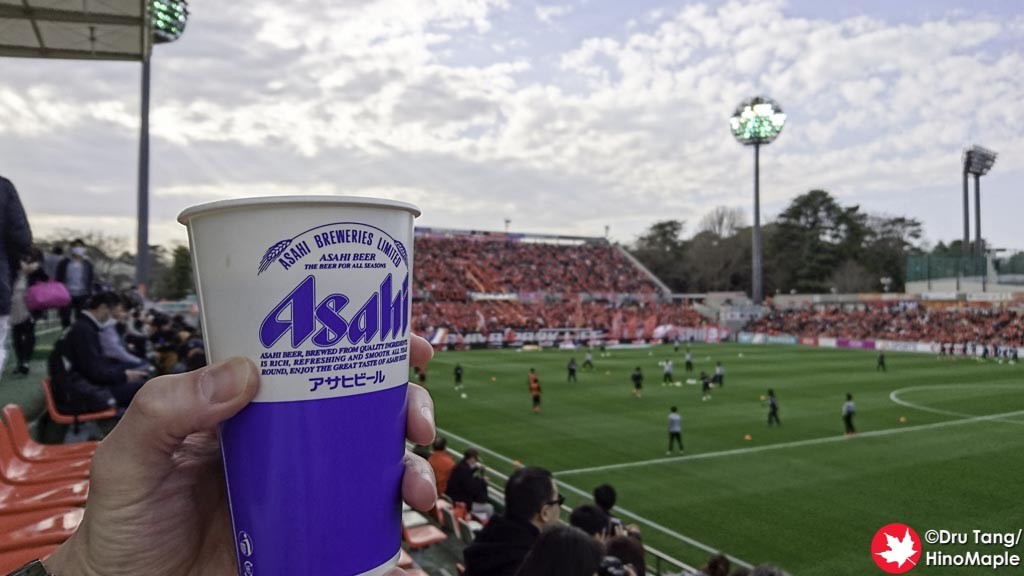 Bass in an Asahi Cup

The game was fun to watch but not a good game for home fans.  Hiroshima Sanfrecce was the stronger of the 2 teams, even though on the league table they were behind Omiya Ardija.  Omiya is enjoying its first year back in J1 after a year of relegation in J2 and they are off to a decent start.  The game started with Omiya pressing a little but Hiroshima was able to convert on mistakes and a very weak defense.  I was shocked to see how fast Hiroshima could press against Omiya to get the ball to the net more effectively.  While the total shots were similar, Hiroshima had better chances with men who were in the open and they opened the first half with 2 goals. 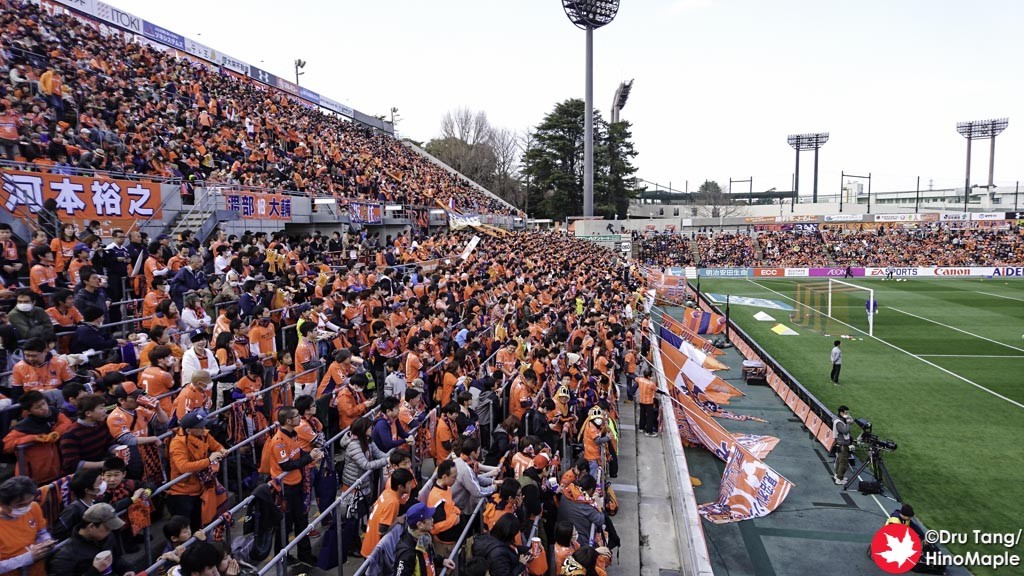 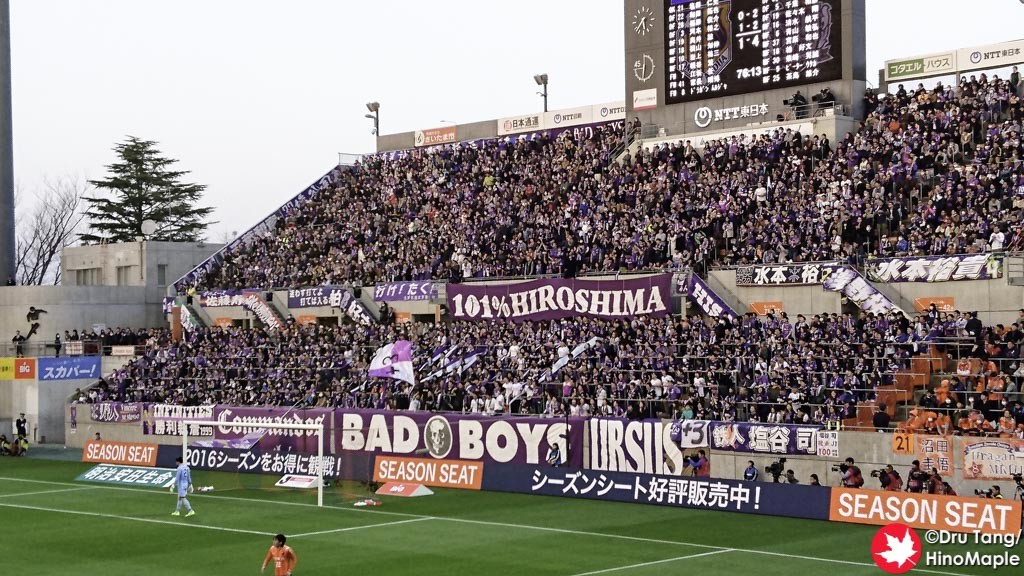 The second half started similar to the first.  Omiya came out kicking and converted a good goal to narrow things to 1-2.  Unfortunately that was all Omiya could do as Hiroshima grabbed 2 more goals before the final nail in the coffin was put in near the end of the game.  I will say that the fans were really into the game from both sides.  While the Omiya supporters were not as strong as if they were winning, and being closer to the visitor’s side meant that I kept hearing the Hiroshima fans cheering louder, it was still a lively game. 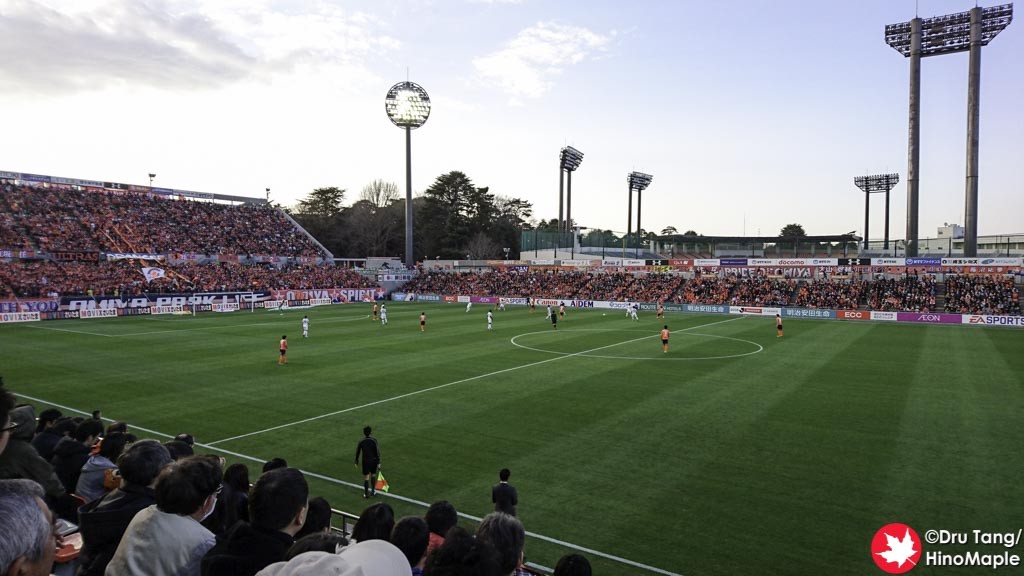 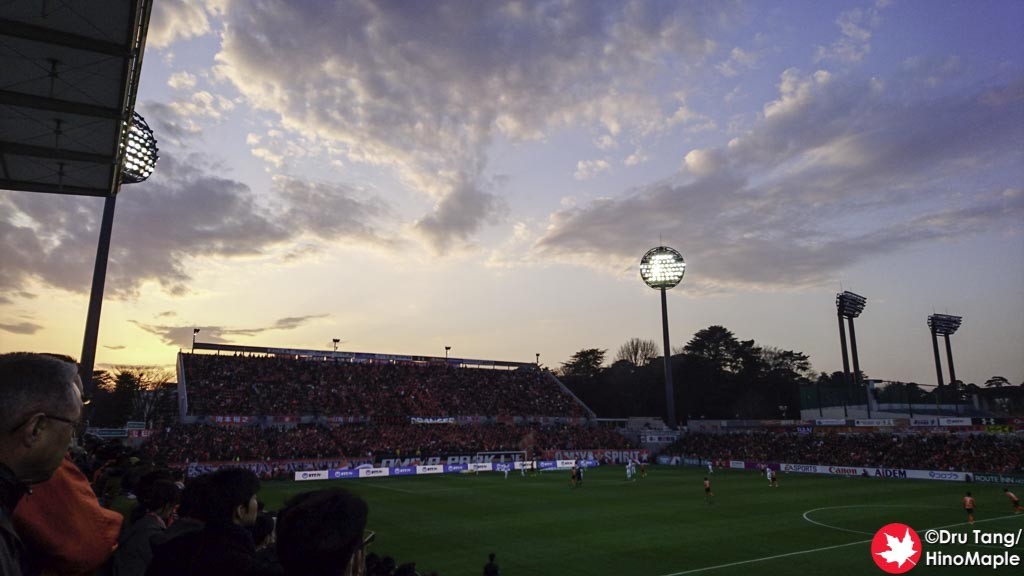 Sunset at the Game

I really liked the small stadium feel compared to Ajinomoto and Saitama Stadium.  I think I will be back to Omiya again in the future to cheer Ardija, but my heart is with FC Tokyo so I’d rather go back to Ajinomoto to support my real team.

PS:  Did you know that I also like Hiroshima Sanfrecce?  I actually like most of the teams in the J League, so I wouldn’t mind cheering for almost any team out there.