Another year has come and I have made what I hope isn’t a final trip to the Grand Prix of Japan for MotoGP.  I have been going to the races for several years in a row and this year had just one small hiccup.  I usually like to go on qualifying day and then just relax on the race day, but this year was a little different.  We were a little late to reserve tickets on the overnight tour so we had no choice but to take the day trip schedule. 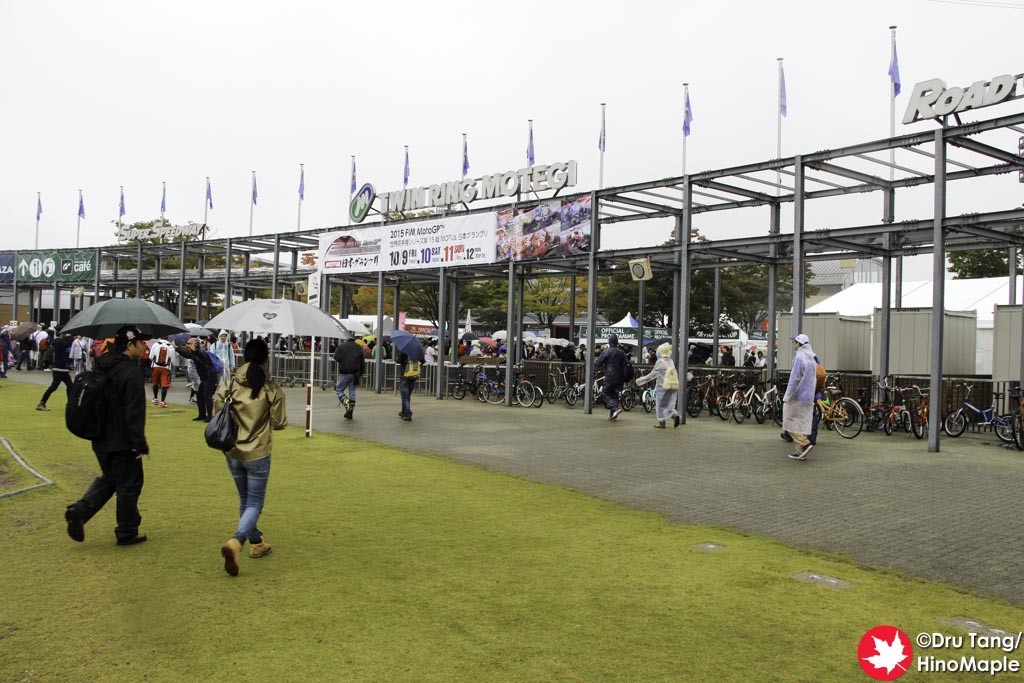 The day started off by me and the Saviour going to Tokyo Station bright and early in the morning.  We arrived at 6:30 and departed at 7:00.  It was not a fun departure, as always, but we made it on time and actually made it to the track quickly.  We were scheduled to arrive by 10 am but actually got there 30 minutes early.  This was great but since we were on the day trip, a lot of people had to join the “guide” to get to our seats.  Being seasoned pros, we didn’t care for the tour and just wanted to go on our own as we knew where to find our seats.  Thankfully we could “check-out” and take off before everyone else, and a few others did the same. 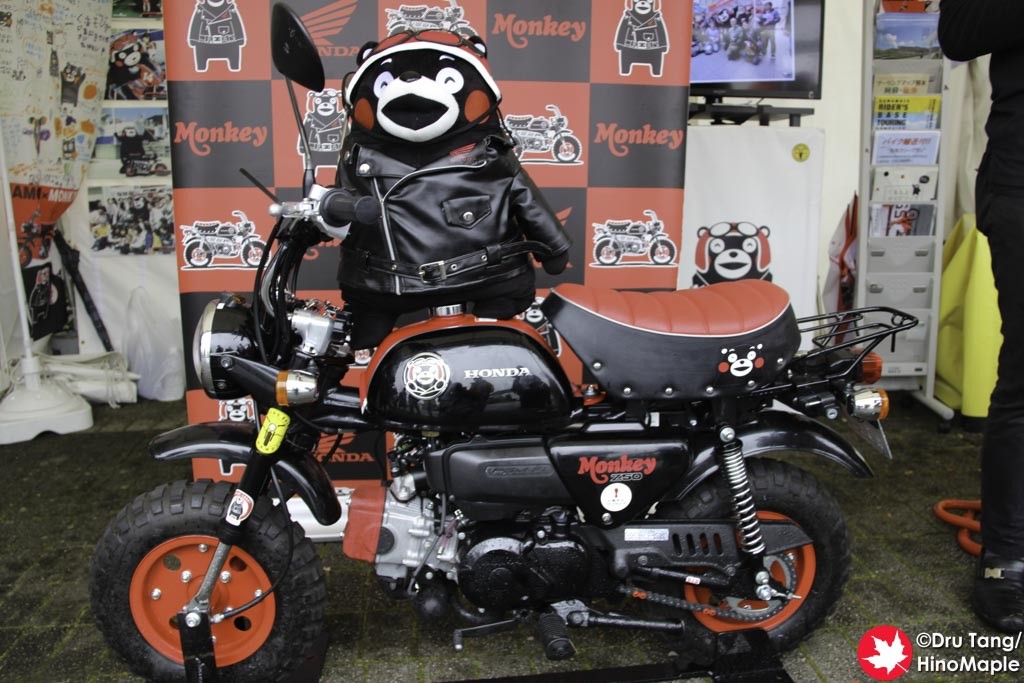 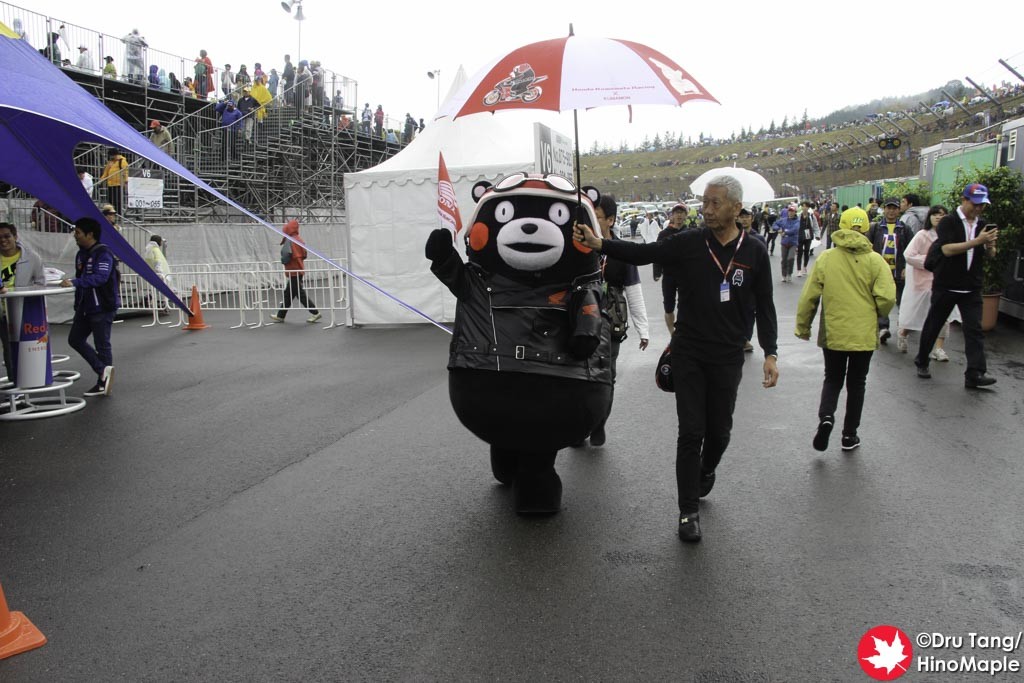 Kumamon at the MotoGP Race!

Once we got off the bus, the rain was coming down lightly.  Unfortunately this would be a day filled with light rain but nothing we couldn’t handle.  We brought jackets just in case but since we went on a day trip things were very tight, schedule wise.  We made a B-line for the main entrance and as always they had some activities set up.  I took a quick look around but wanted to get inside and do my traditional shopping. 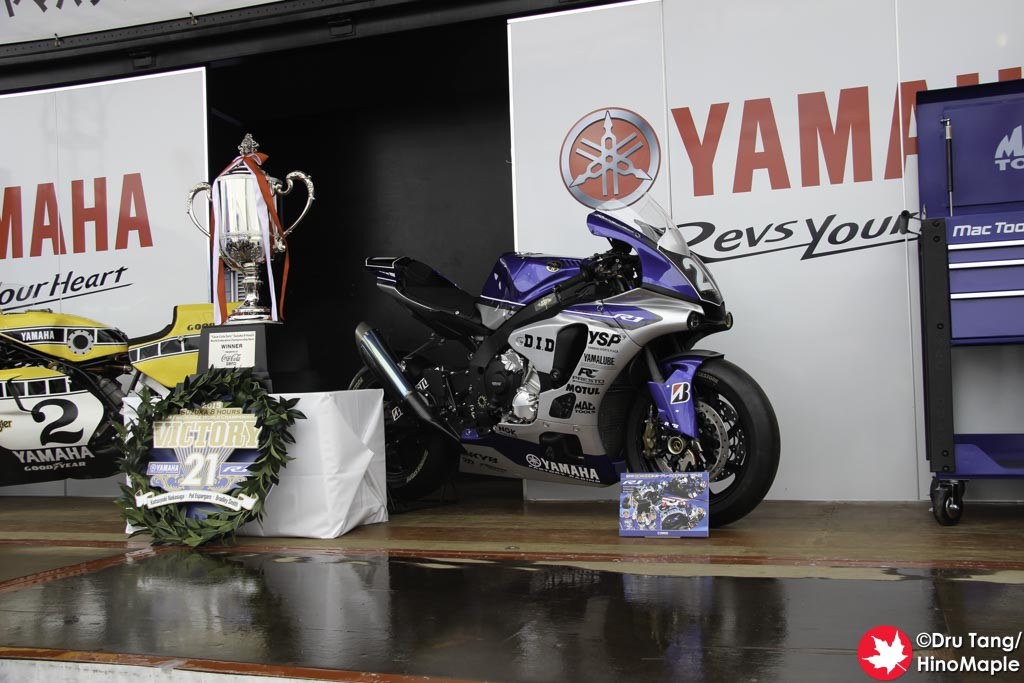 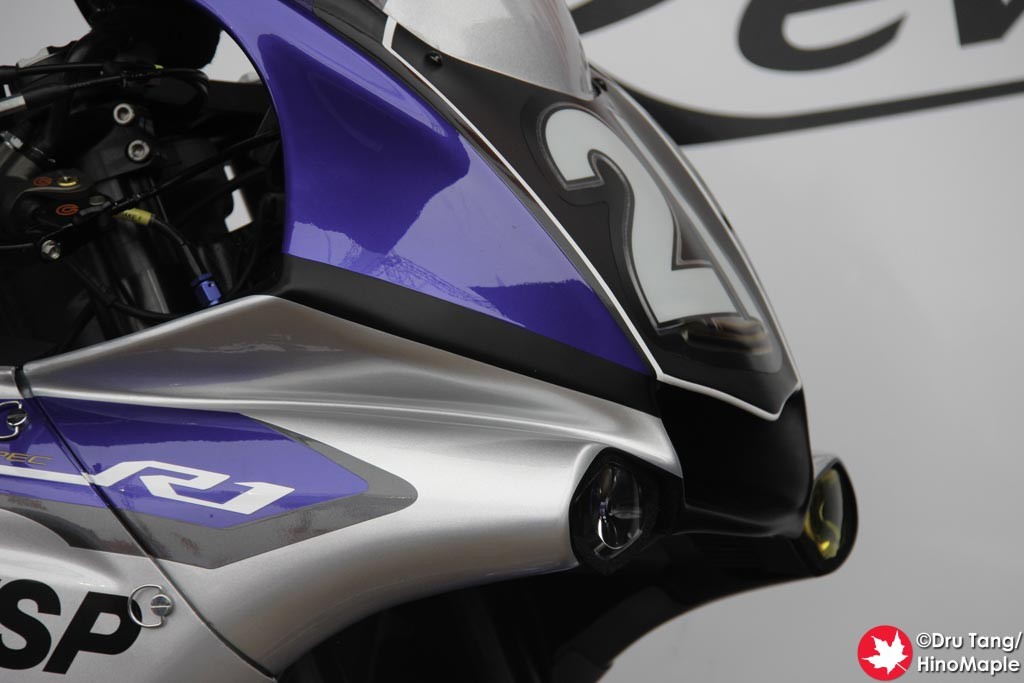 As always, race day is where you see the most people.  I really don’t enjoy shopping on race day for several reasons.  The main reason is that it is crowded and I have been loathing crowds recently.  I like it when things are more leisurely and I get a little anxious in crowds.  People are also pushing their way through and not being patient enough to wait for people to move out of the way, although it does require a LOT of patience when people refuse to look behind themselves when they stop in the middle of an aisle.  The other bad thing is that a lot of items are sold out by late morning on race day.  You really have to go on qualifying day to get your pick of the items, and I was disappointed with the selection.  I didn’t buy anything this year, aside from the annual program that they sell. 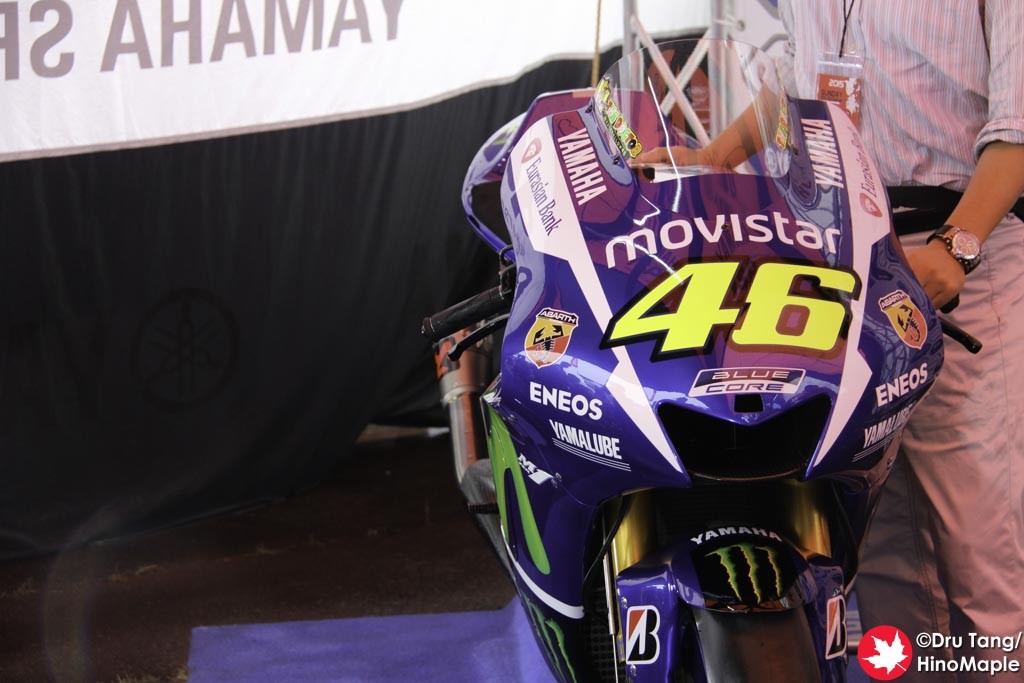 With the rain at Motegi this year, the entire schedule was delayed.  If the helicopter can’t fly, they can’t do anything in case of an emergency, so they delayed the start of warm-up until 11am.  This was a good thing for me, but also bad; I was able to relax a lot more and enjoy a few drinks before heading to my seat, but I didn’t have much time between races to enjoy the V-stand area. 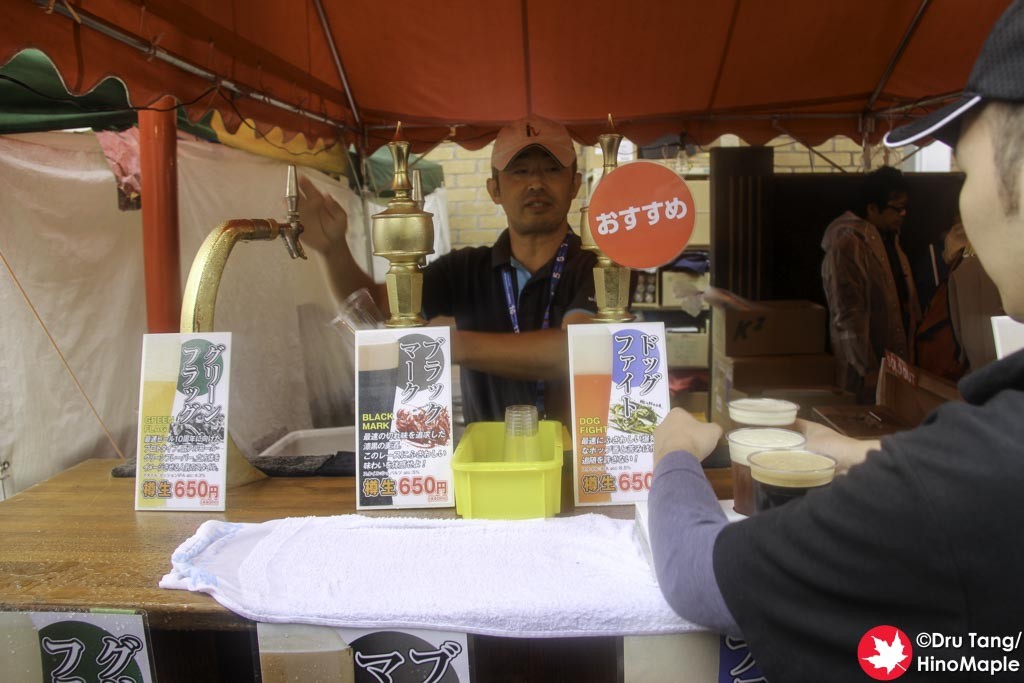 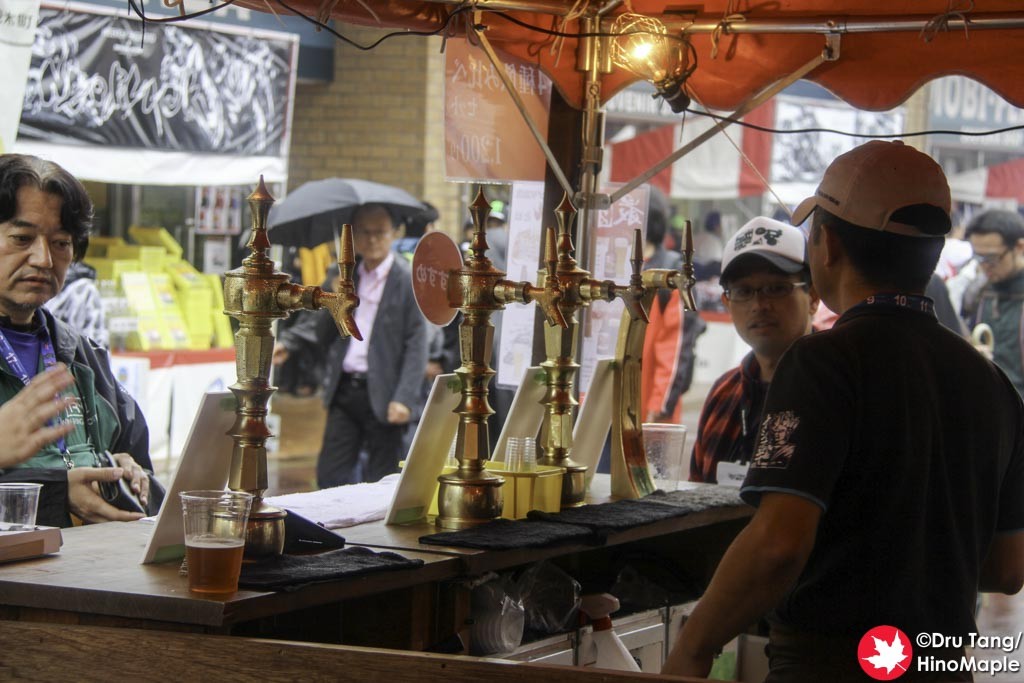 This was the second year they had the V-stands.  It was a bit smaller than I remembered it from last year.  The V-stand is right next to the home straight and the view is really good.  While you can’t see as much of the entire circuit, the experience is amazing.  You are really close to where the riders will line-up for the start and the noise is tremendous.  Comparing it to F1, this is a lot more fun. 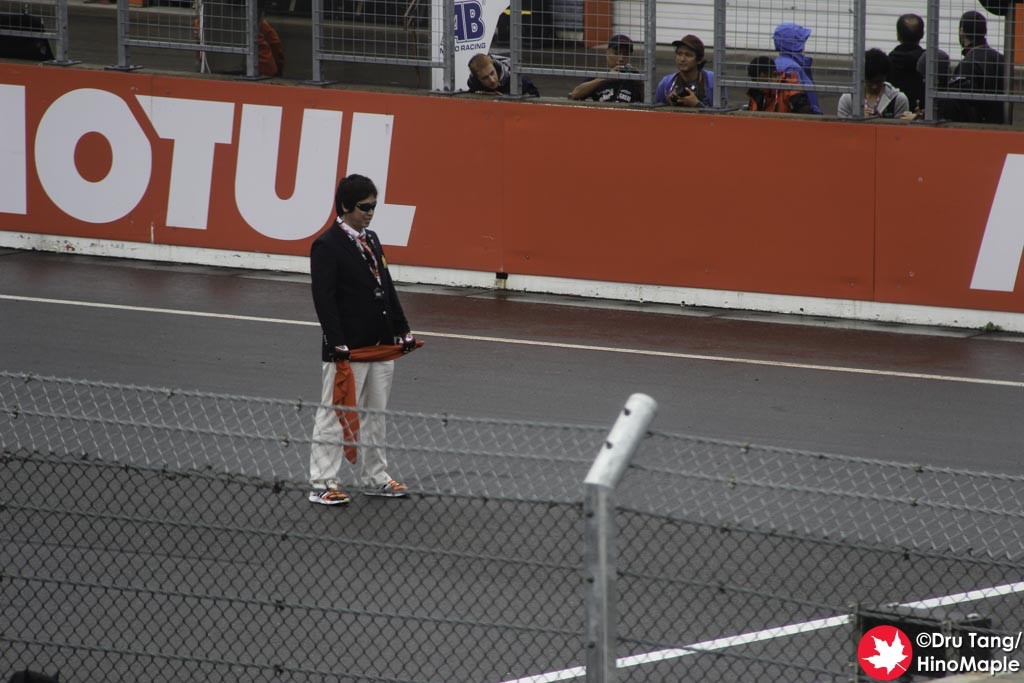 Preparing for the Start of the Race 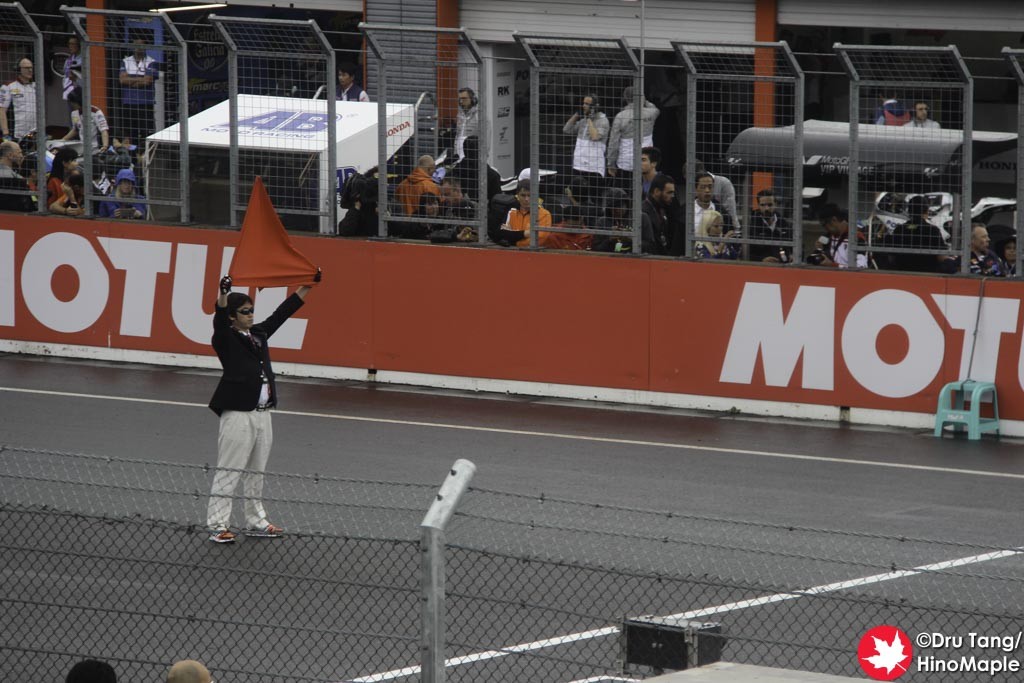 Everyone is All Lined Up! 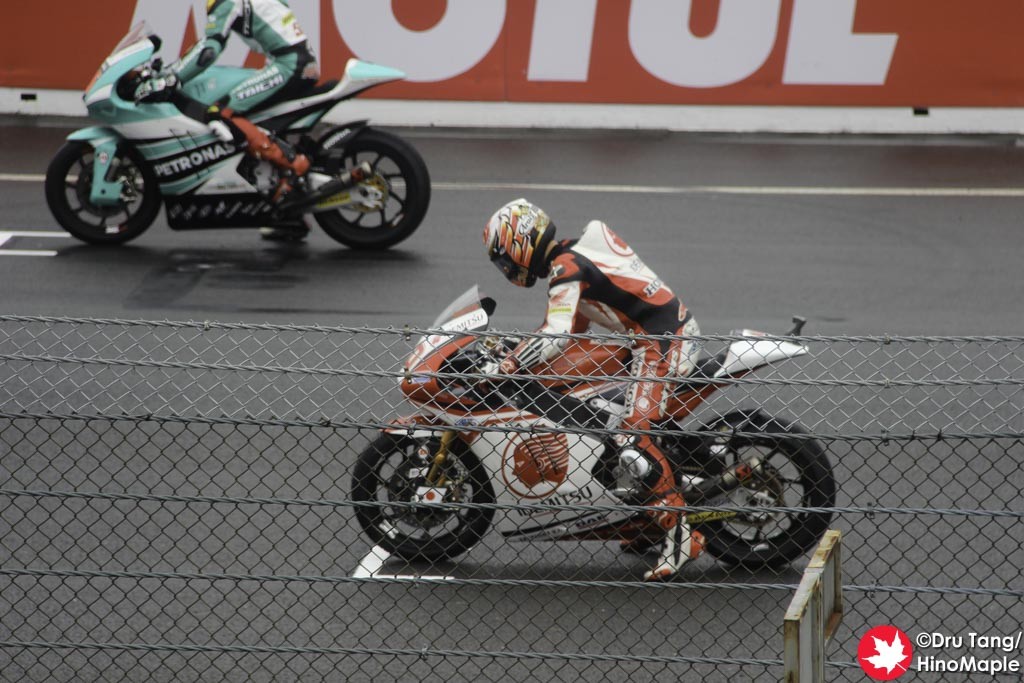 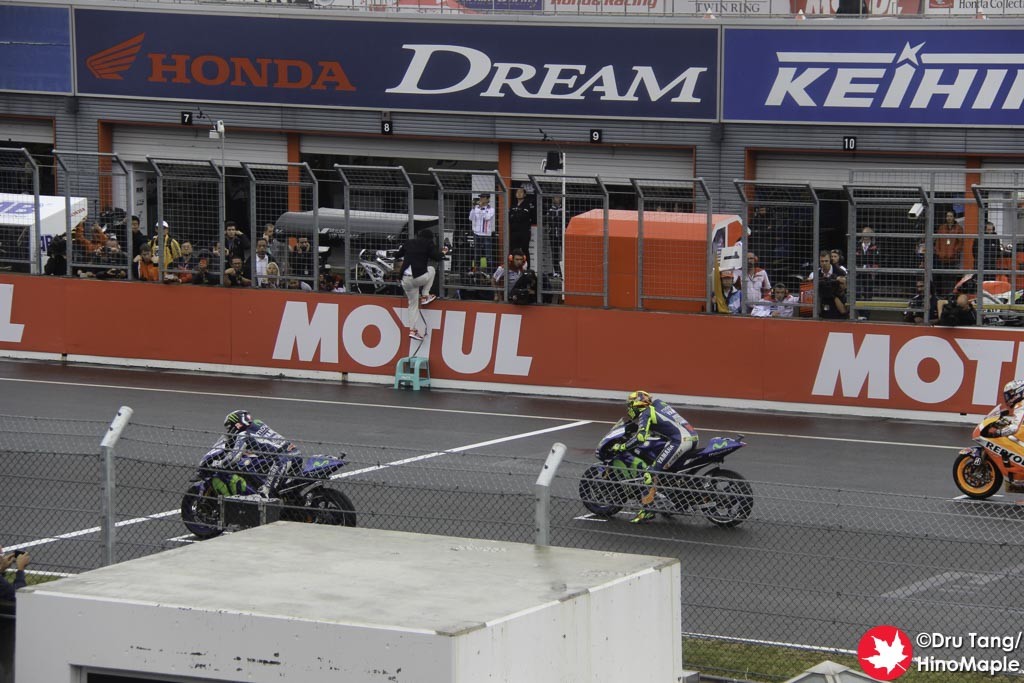 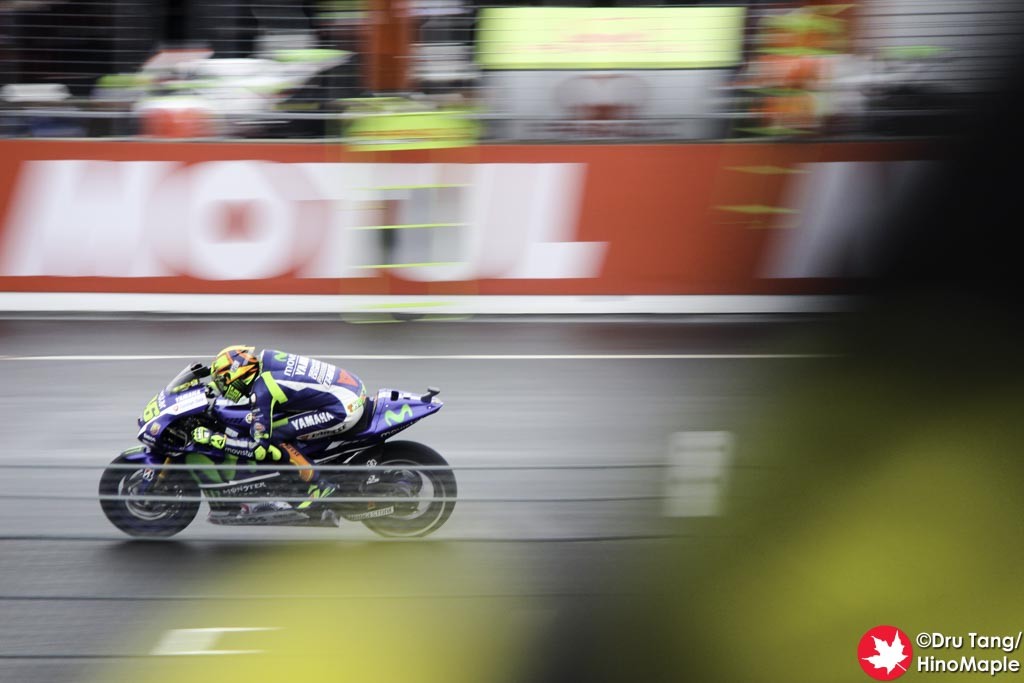 Behind the V-stands is a special area for people to enjoy some special exhibits as well as some international food.  The exhibits this year were a lot better than last year as they had a lot of old MotoGP bikes on display.  They also had a small Ace Cafe as well as a few other shops to see the new Ducati Scrambler as well as some of the local items.  Thankfully they had craft beer there too! 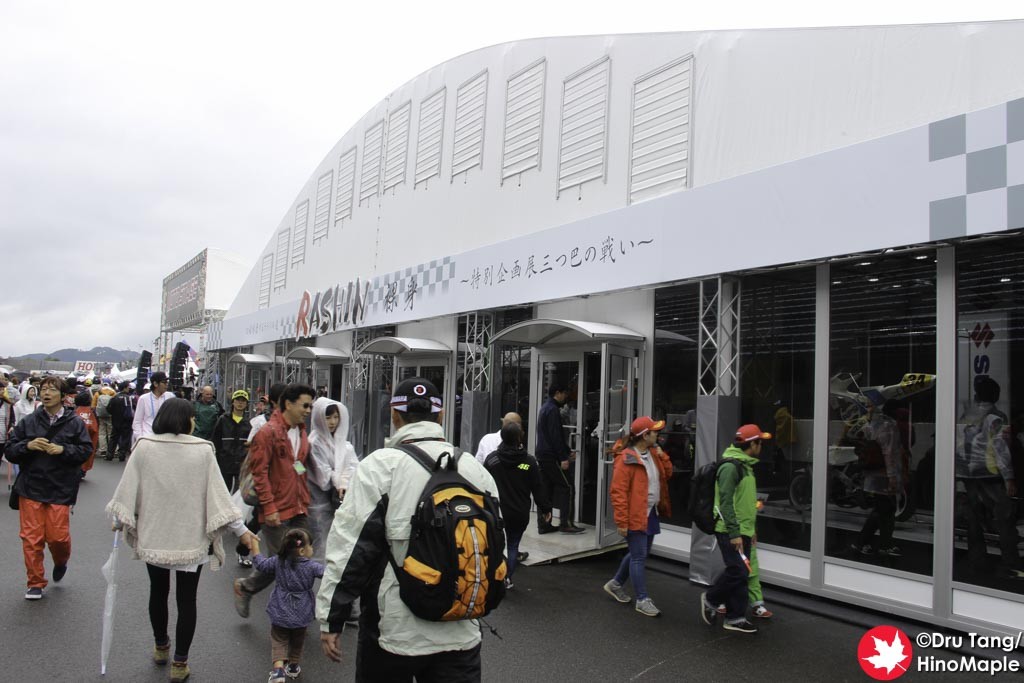 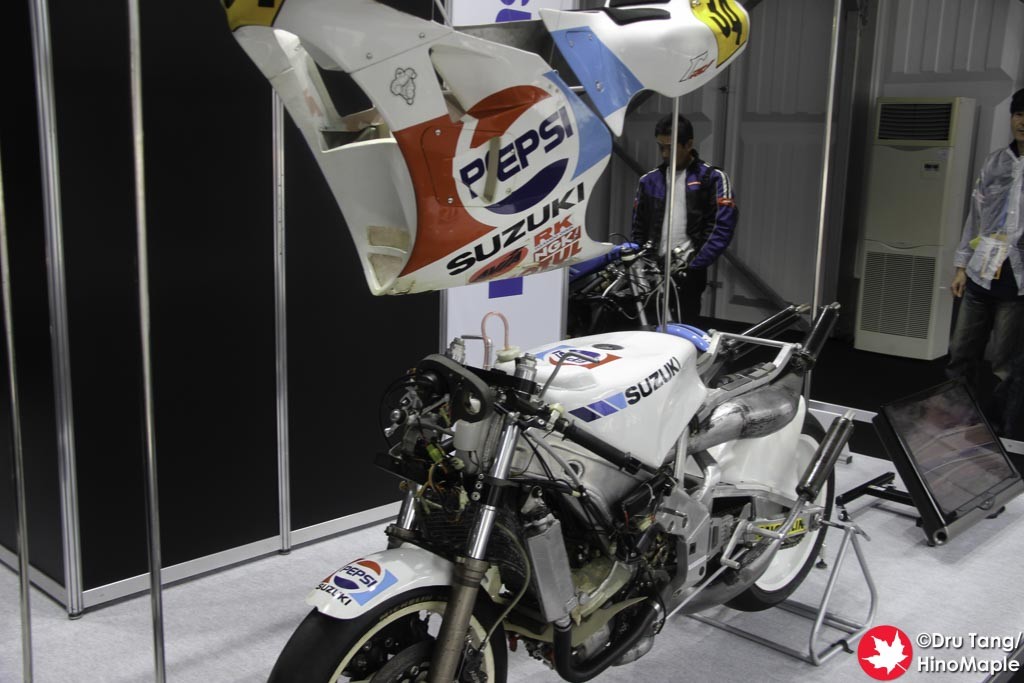 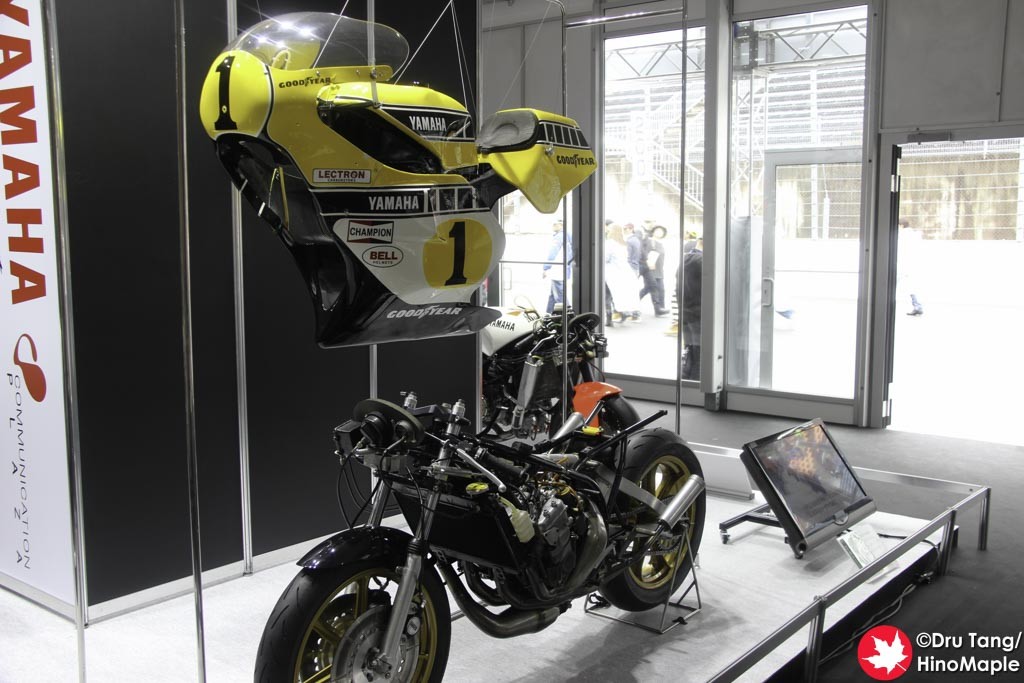 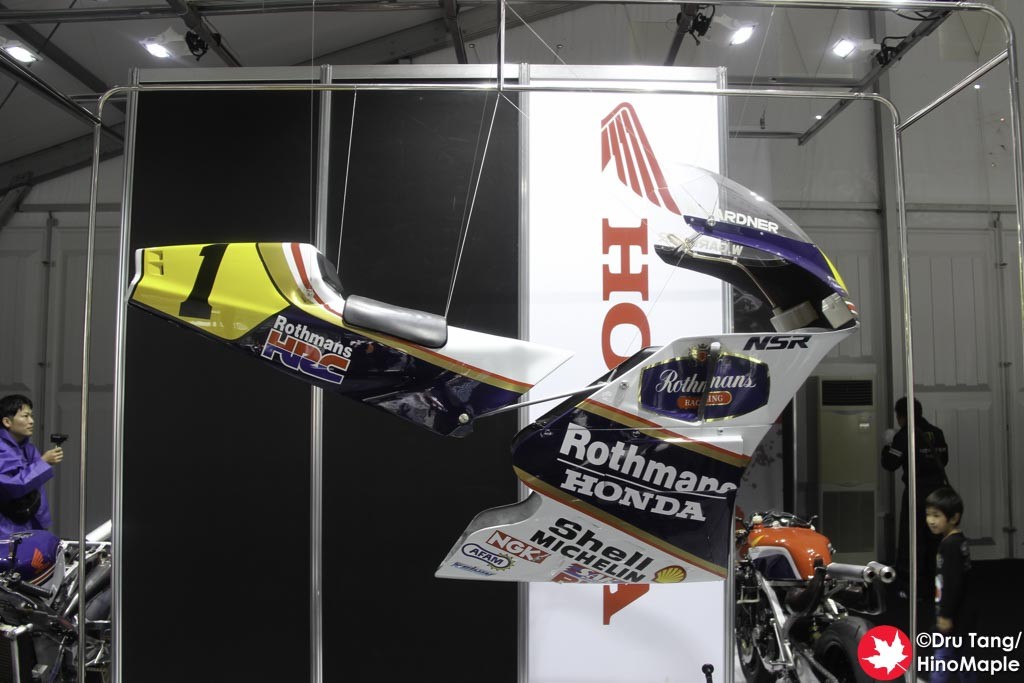 The food around the V-stands is pretty good but I rarely eat it.  I just can’t be bothered when I have my own favourites.  I almost always eat the Yamaha meal which is a simple pasta dish.  They also have a Honda dish which is always paella, but they also added a Suzuki dish which was a basic pork sandwich.  Having had the paella before, I didn’t care for it, but I do enjoy the simple pasta and it even comes with a little plastic folder.  I also got a chance to try the pork sandwich and it was actually really good, but the gift was a little boring.  The only other item that I always have is the beef steak on a stick, but that is always the best item and I always seem to find the same guy who makes it every year. 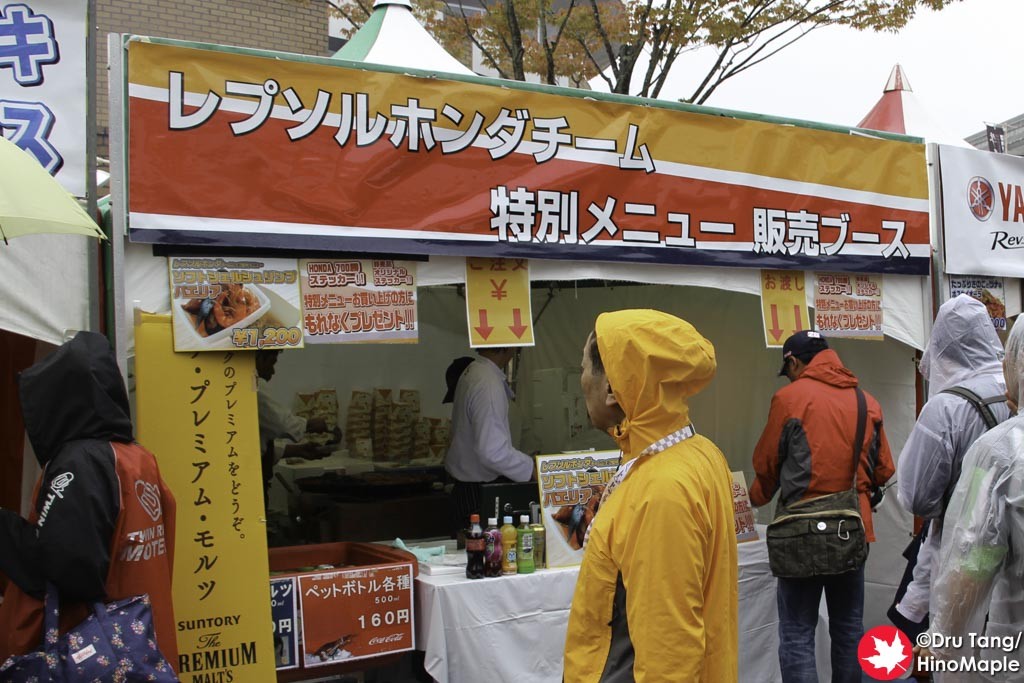 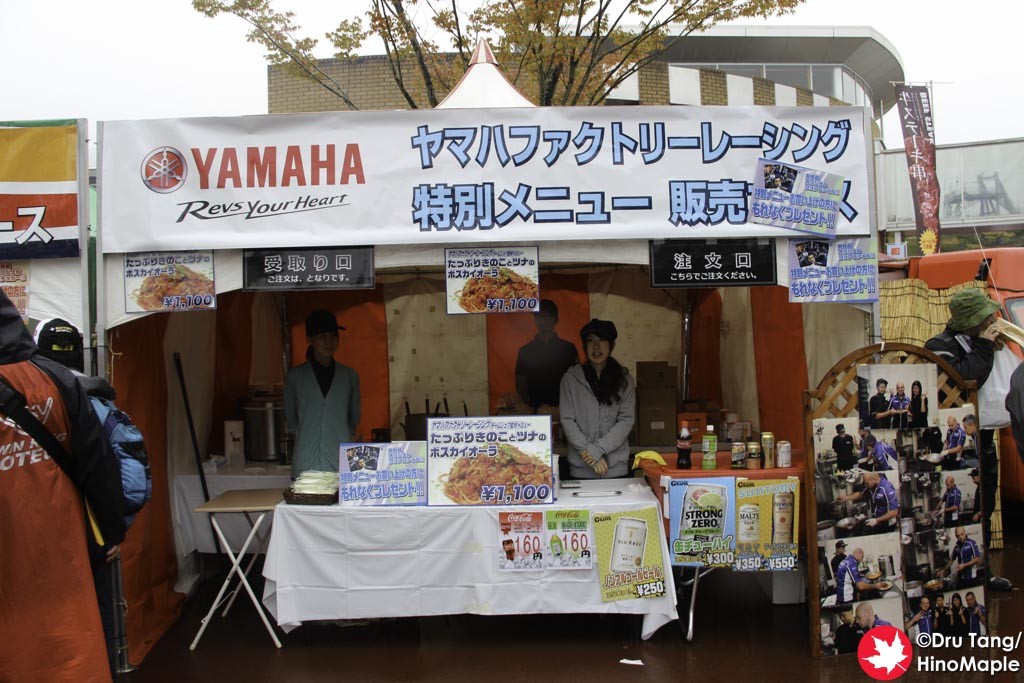 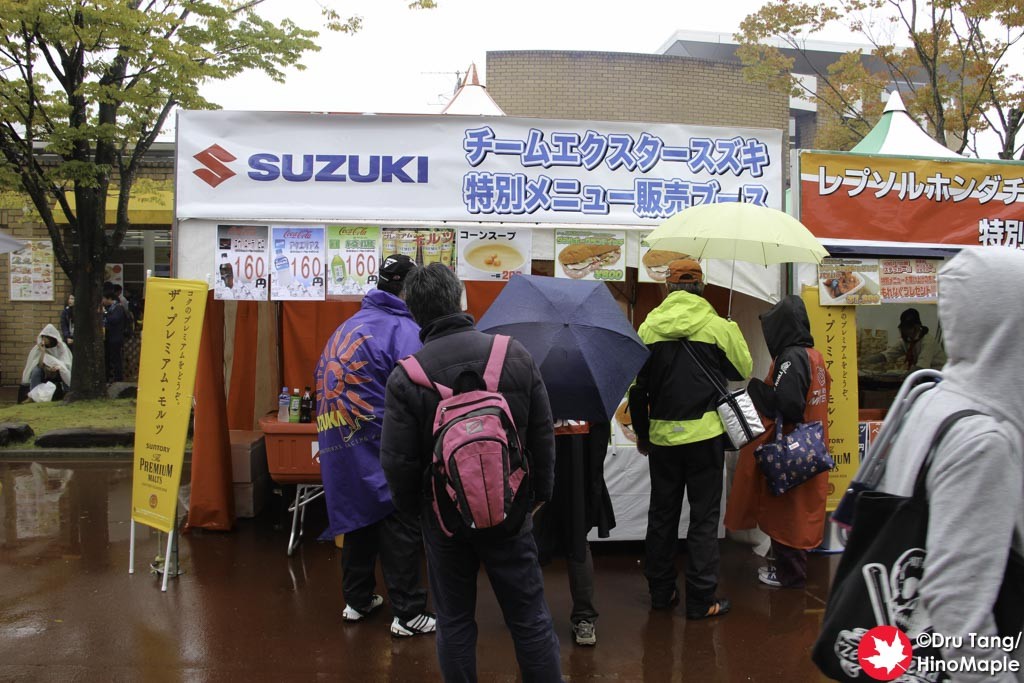 One new thing on the tour was that there were several foreigners on the bus as well.  The Yamaha hired guide did her best to help out but there was a little confusion.  At first the guide thought I couldn’t speak Japanese, but she ended up only talking to the people behind me.  There was another couple next to me who was a Japanese/Foreign mix and they didn’t need to worry either, but the people behind us appeared to be visiting from overseas.  I’m not sure how they got their tickets but somehow they did.  It would be interesting to know how they did it. 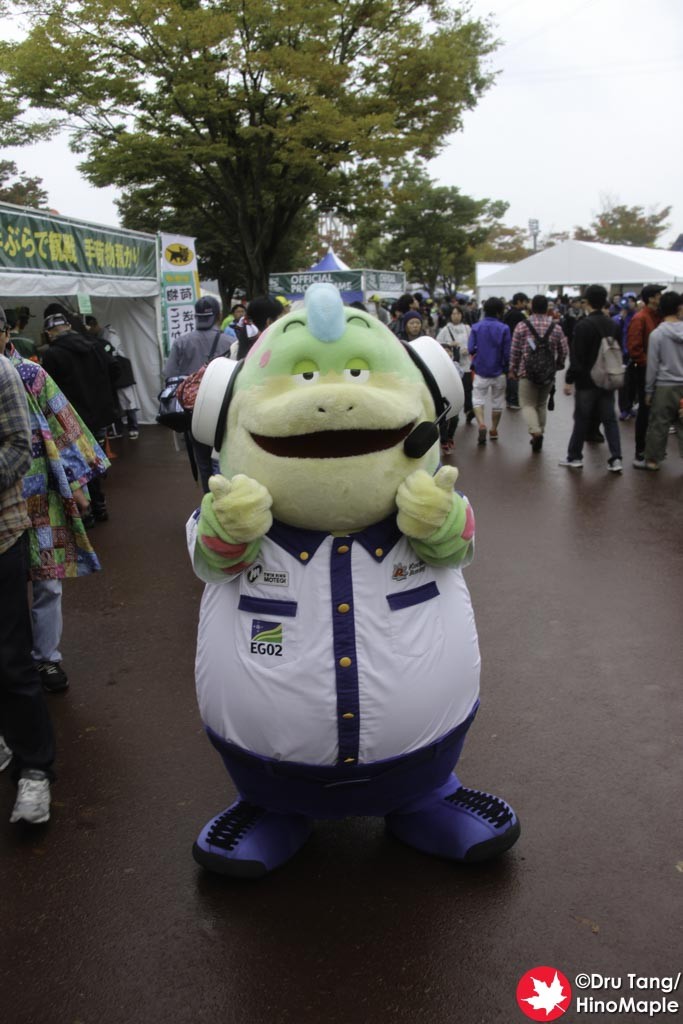 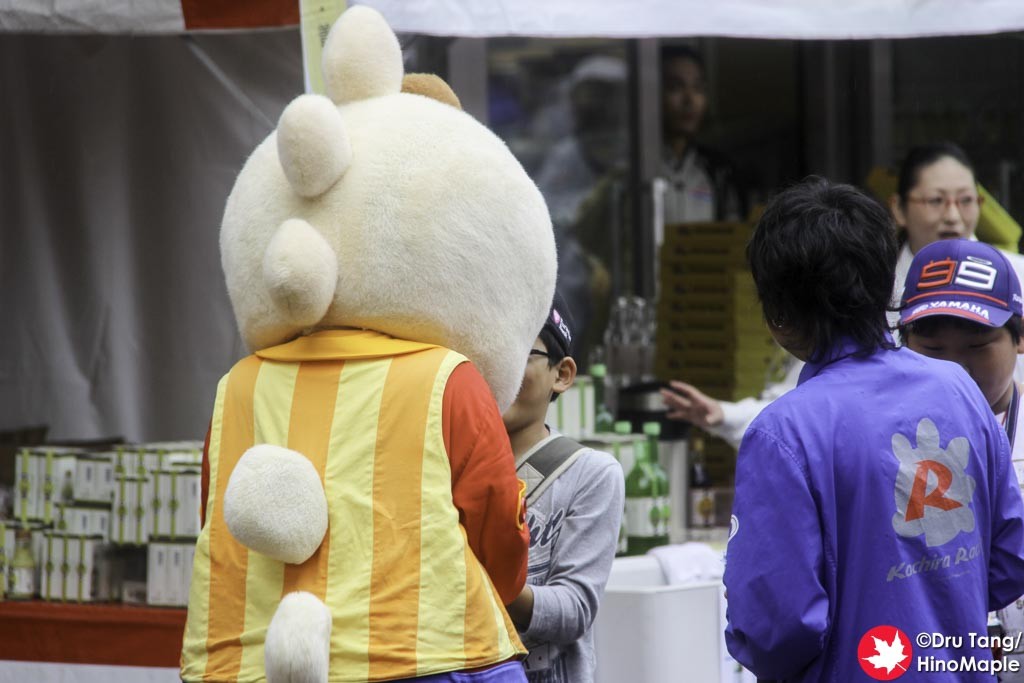 These Yamaha fan tours are getting pretty standard.  I love taking it as I am a big Yamaha fan, but a bigger Valentino Rossi fan.  If he ever retires, I may change and do my own personal tour so that I can head there and not worry about things so much.  I really enjoy the other areas of the course and if I go on my own I may be able to take Sox with me too!  Unfortunately, as I mentioned in a previous post about the F1 Japanese Grand Prix in Suzuka, I will be very busy for the next few years and can only hope that I will have a chance to go to the MotoGP next year.  If not, I’ll definitely be sad but work comes before pleasure. 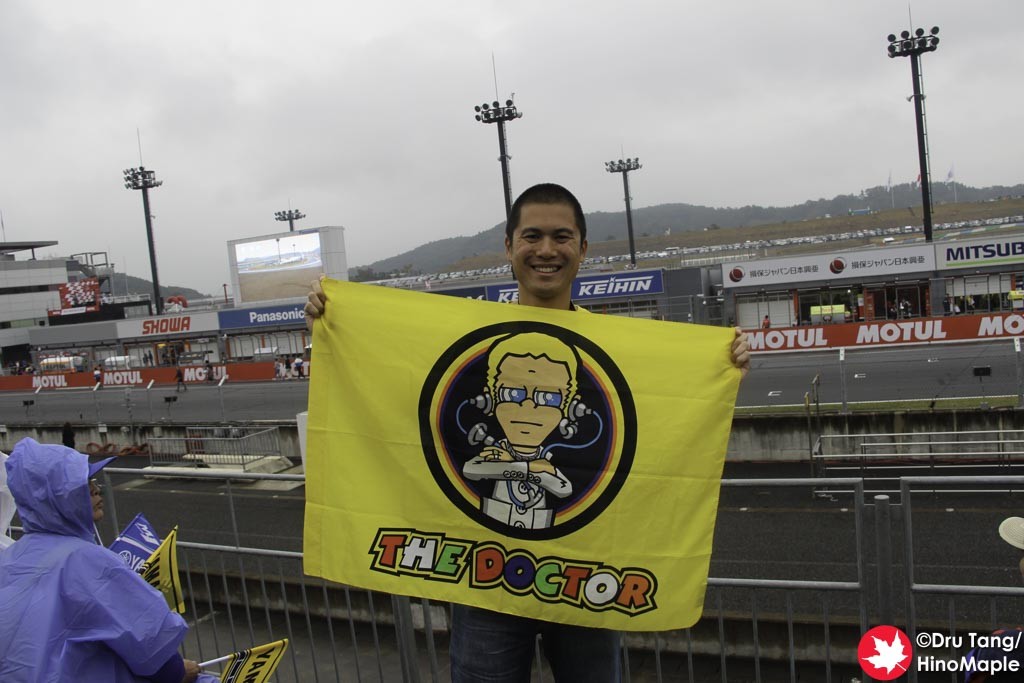