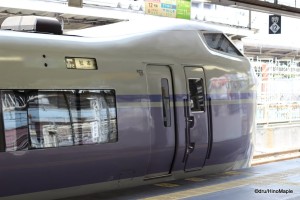 The Azusa and Super Azusa train is a special limited express train that mainly runs between Shinjuku and Matsumoto along the Chuo Line.  The train is on a very busy suburban line and it is really nice to sit back and relax as you pass Chuo Line station after station.  I had my first experience on this train when going to Kamisuwa Station for the Nomiaruki festival and I must say that I was surprised with how fast it actually was.  It may not be as fast as a Shinkansen but it gets the job done and I can enjoy the countryside a bit more than if I was on the Shinkansen.  I also enjoyed how fast I got to Takao.  It can be tediously slow to get out to Takao on the regular rapid train service on the Chuo Line but the Azusa and Super Azusa was a lot faster than I had thought. 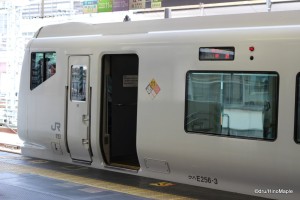 The main thing to think about is the difference between the Azusa and Super Azusa train services.  The Azusa is a slower train that makes more stops and the Super Azusa stops less so it is faster.  Ultimately it doesn’t matter which train you take, unless you need to make use of an Azusa stop that isn’t serviced by the Super Azusa, as the times between trains is long enough that the Super Azusa never jumps the Azusa trains.  The other factor to consider is how far you are going.  The Super Azusa always terminates at Matsumoto while the regular Azusa often heads past Matsumoto for several stations.  The Azusa service is also one of the longest service lines within Tokyo.  The longest service starts in Chiba and runs all the way past Matsumoto.  This service runs once a day; from Chiba to Minami Otari in the morning and the reverse at night.  For those who live on the east side, this is a very convenient service but definitely not worthwhile unless you can make the times work for you.  I believe this is more for business men who have to go to Matsumoto from Chiba to inspect a factory or do some other business there. 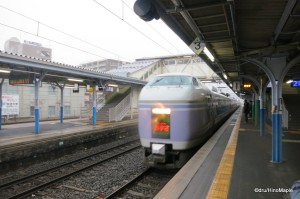 Super Azusa in the Rain

There are two trains being used on the Azusa and Super Azusa service.  The Super Azusa train is a bit older but it had more functions.  It is a tall purple/blue train that is looks very cool.  It has a tilt function to allow the train to run a bit faster on the curves when going through the mountainous areas of the Chuo Line.  The train is definitely showing its age with the interior looking a bit dark and the seats looking a bit worn.  The train is definitely due for refurbishment of the interior when they get the chance but I don’t believe they will do it for this train on this line.  They may do it in 2016 but it won’t be for the Super Azusa service.  I found the Super Azusa train to look great on the outside but poor on the inside.  If the interior was a lot better I would try to take the Super Azusa more often compared to the Azusa but alas this is not the case. 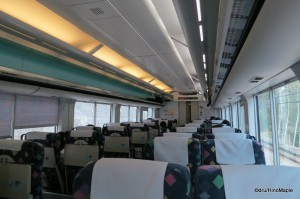 The Azusa train is, for lack of a better word, a happier looking train.  It is primarily white on the outside with a square mosaic pattern in one quarter of the car.  It is almost a signature look for the train and it is carried throughout the interior as well.  The interior is a lot brighter and the windows seemed a bit bigger compared to the Super Azusa trains.  The brightness difference could also have been due to the poor weather when I took the Super Azusa train and the car I was in when I took the Azusa.  The cars in the Azusa have different interiors with different primary colours as the theme.  The overall theme of the regular Azusa tends to be brighter and more spacious than the Super Azusa.  The trains look cheaper on the outside but recently they have been repainting the train cars so they look a lot better now. 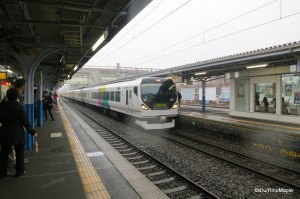 Azusa in the Rain

I have heard that they will be replacing both the Super Azusa and Azusa trains with a new series in 2016 and the Azusa trains will be shifted to another line around Tokyo.  I believe the Super Azusa trains will be moved to another line or sold to another company but I’m not too sure as I couldn’t get any news on this.  Currently the new train to be used on this service looks very cool and taking most of the styling cues from the Super Azusa in terms of the shape and a bit of the Narita Express in terms of paint schemes.  It will be fun to try this train when it does come into service.  For now, the current Azusa and Super Azusa trains are fun to take.  You can go to many different places in central Japan and enjoy the scenic countryside once you get past Mt. Takao.  Hopefully I’ll be able to use it again sooner rather than later.