Last year in June, I visited Hitachino Nest’s brewery for the first time.  I went with my friend E and we made a couple of beers all by ourselves.  It was a weekday so we had a lot of time.  It was one of the best experiences I had ever had up there.  I got to meet a few nice people who work at Hitachino Nest and got some great beers in return.  A lot of my friends were commenting about me making beer up there so I took the time to organize a group to go up.  I didn’t have enough friends but my friend L wanted to go so she got a bunch of her friends to go. 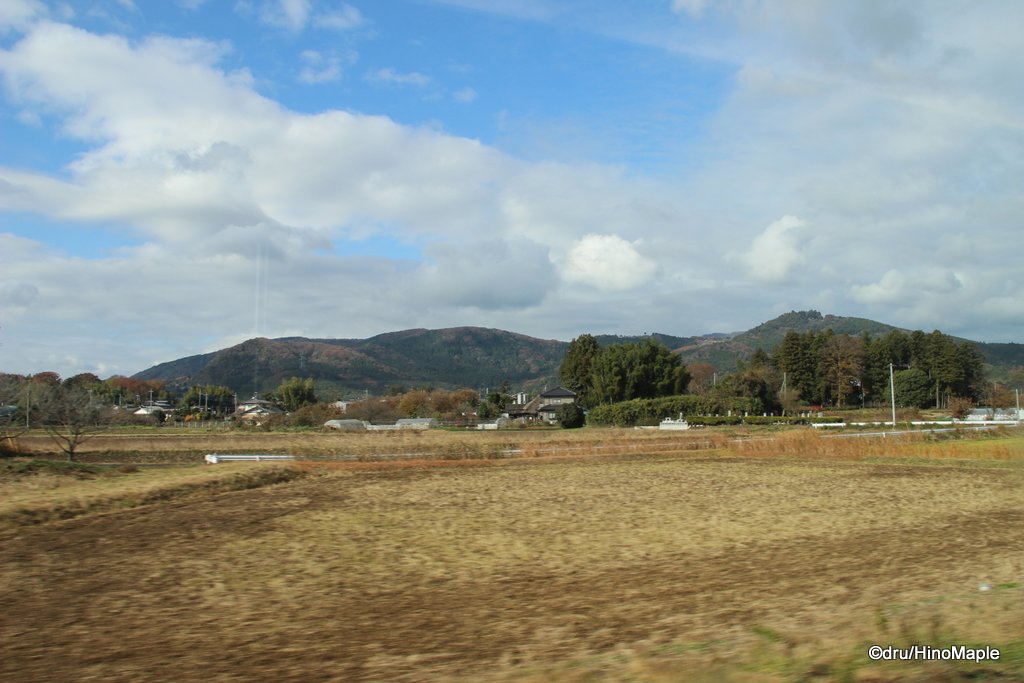 Heading up to Hitachino Nest on the Hitachi Train

In total, we were a group of 12 people.  We had a chance to head up there at the end of November.  It was an interesting trip up as we had one major problem to catch the train.  I didn’t know it at the time but there are two main entrances to the reserved train area and one person decided to wait at the wrong entrance.  It was a bit stressful as we barely made the train but we all made it to the brewery together.  I was pretty tired that morning but once we got to the brewery I was pretty happy. 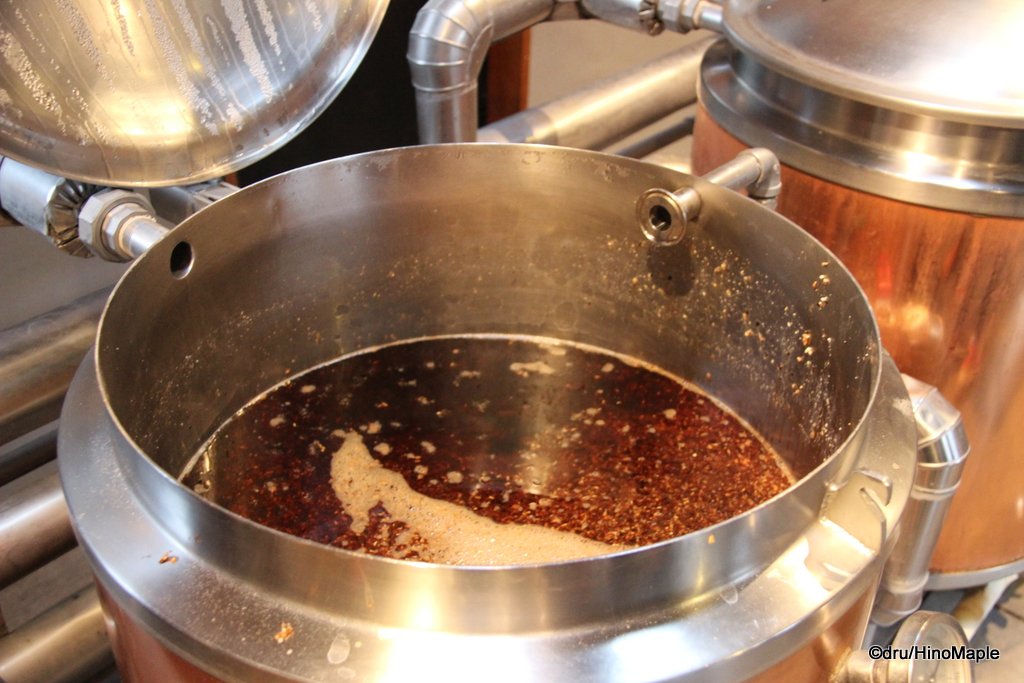 Brewing alone and brewing as a group is a very different thing.  It is also very different to brew with a bunch of people and make sure they are not making the same mistakes I made the first time I went up there.  We were able to do a good job and while I had to help the people around me to do a good job, no one was in danger of making a big mistake. 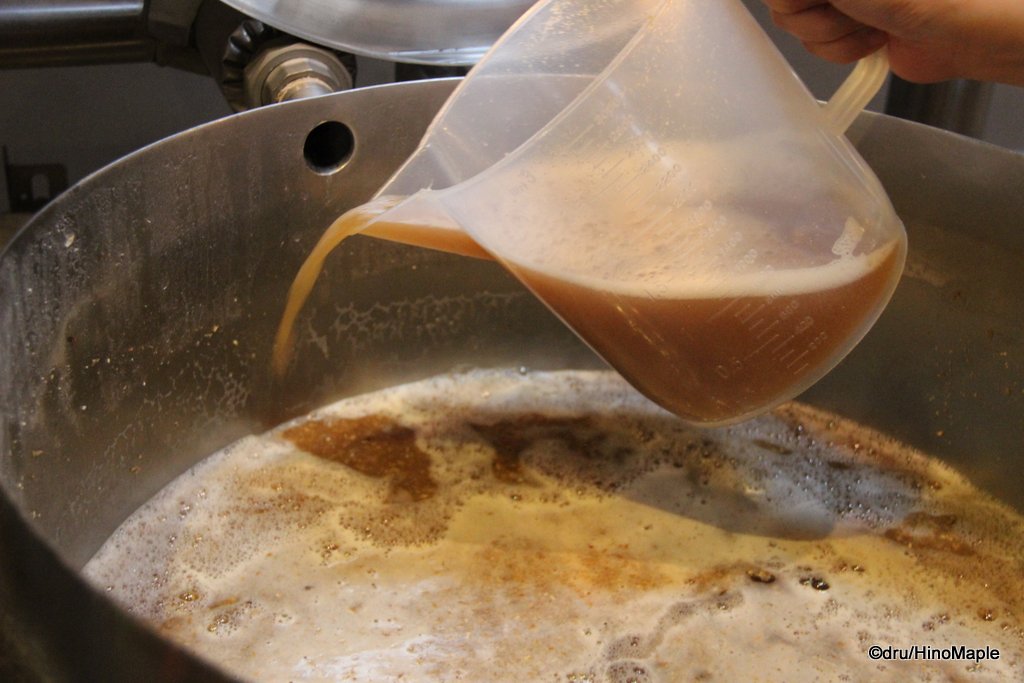 The day went a little quicker than the last time I was up there.  The only problem I had was trying to organize the big group.  With 12 people and 12 minds, it was difficult to get everyone on the same page.  I was also a bit selfish with my own beer as I made a Yuzu IPA. 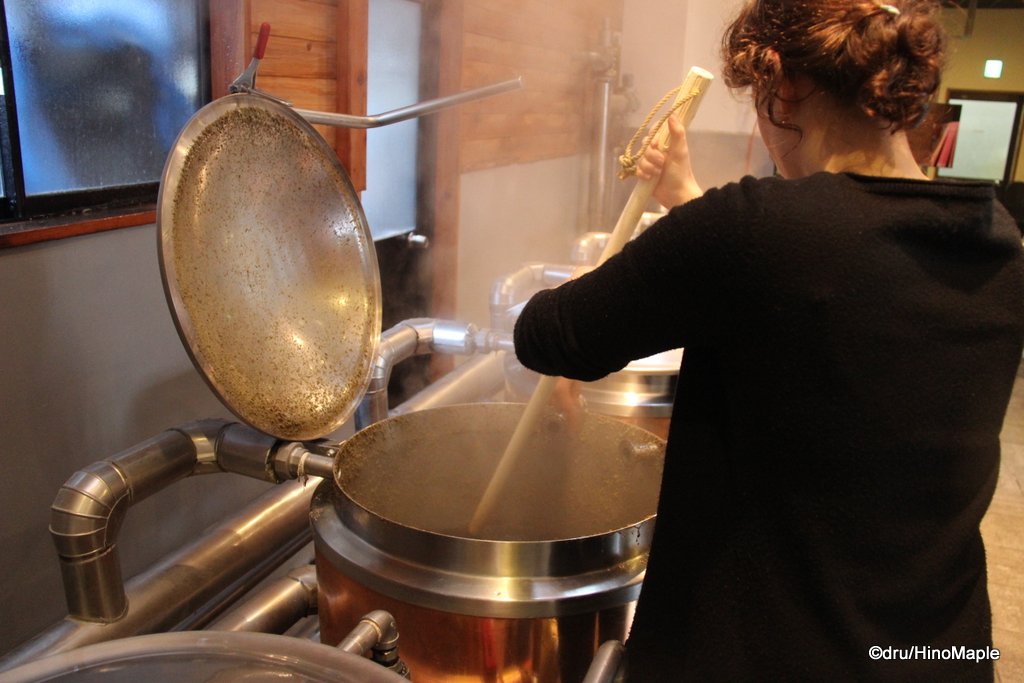 We basically had 4 types of beers and it cost about 7,000 yen each for 15 bottles.  If anything, trying to organize the payment was the biggest problem, but it was all sorted out in the end.  We then had to wait a month and a half to get our beers.  We decided to split the shipments as we needed space in our homes.  We split them up into 4 groups and had no problems with that.  We ended up meeting up again to split the beers. 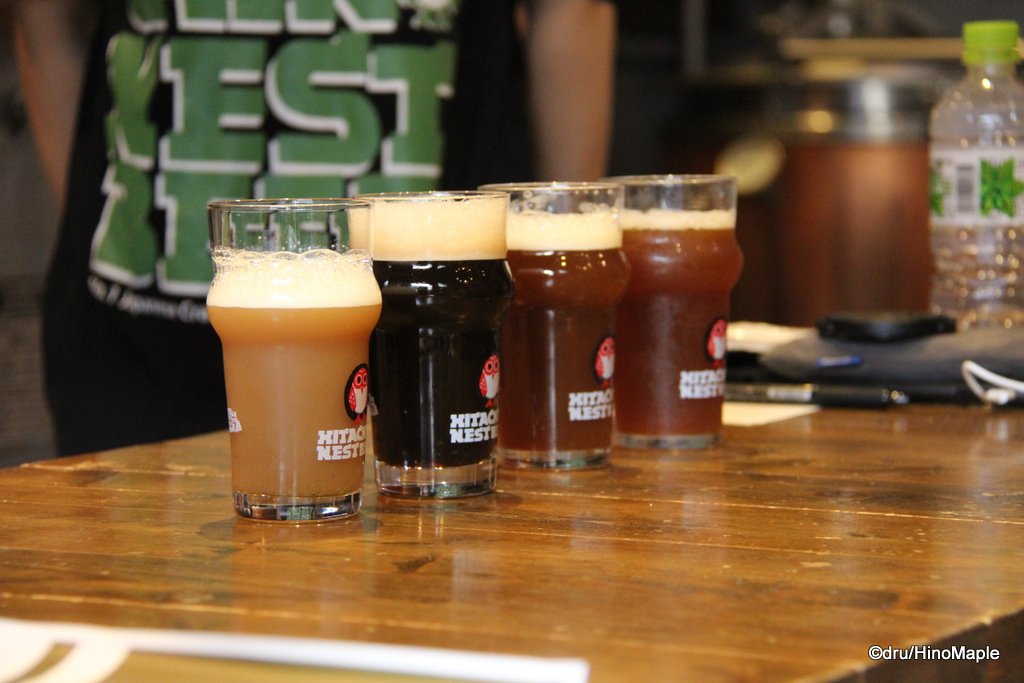 When we met to split the beers, we had a nice house party, ordered some food, and had a great time.  It was fun to just invade one person’s house and do a tasting party.  I never did try any of the other beers but I was happy with my Yuzu IPA. 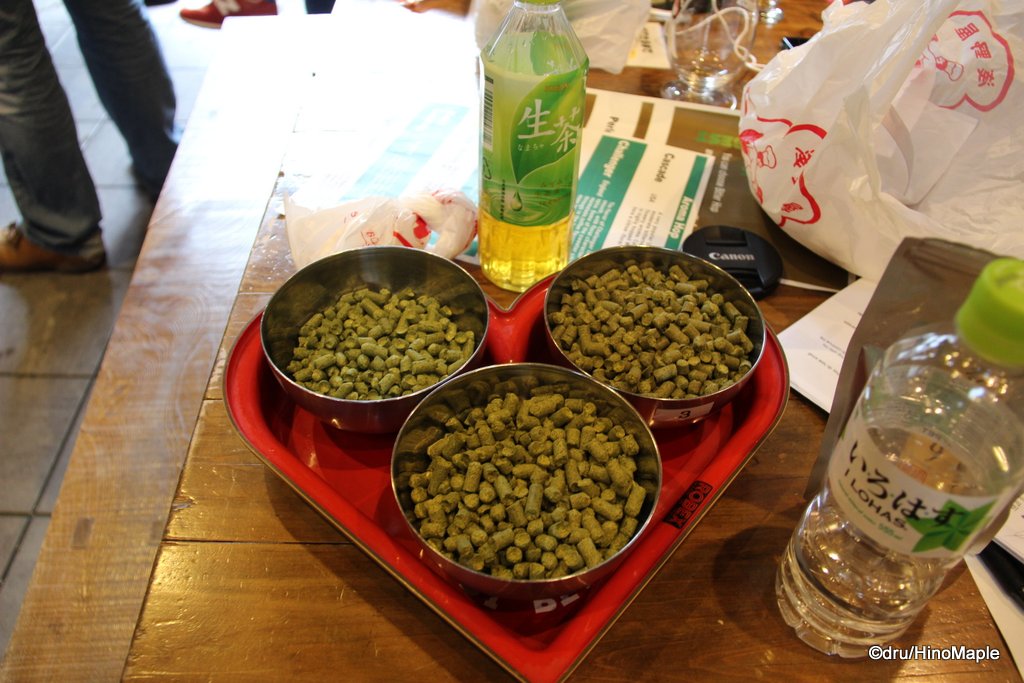 Hops for the Yuzu IPA

The Yuzu IPA was a great beer.  It was designed for 6% at around 100IBUs.  The hop bill was about 3 times larger than the other beers.  Let’s just say that I definitely got my money’s worth.  The first time I opened it I was hit by the strong aromas of the hops.  I used 3 types of hops and they all had varying levels of flavour.  I was a bit sad as the Yuzu smell and flavour wasn’t really there.  I guess it was partially lost due to the level of hops.  Basically, there are things that I would do differently in the future but you can never know until you try it.  I’m still happy with what I got. 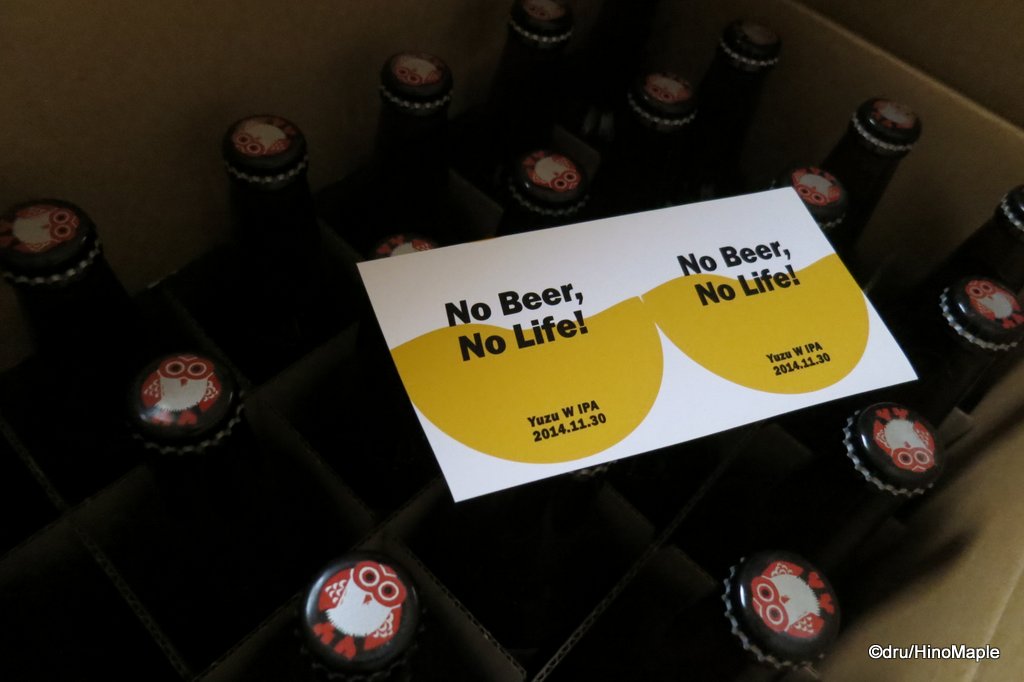 I still have a lot of friends who are interested in going to make beer, but I don’t know if I’ll be going back again anytime soon.  My fingers are crossed, but my wallet is not.  If you do go up there, I’m sure you’ll have a great time just as I did. 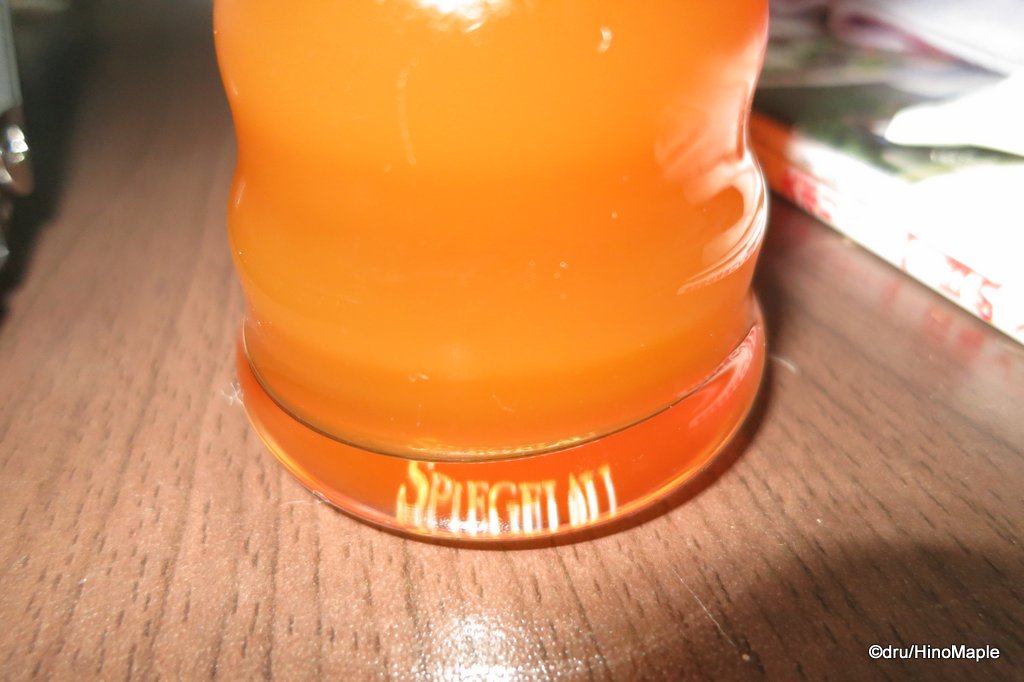