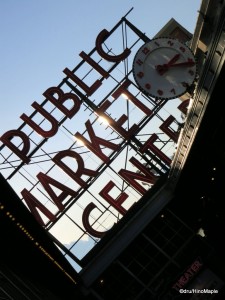 Pike Place Market is one of the most famous tourist destinations in Seattle.  The other major tourist attraction is the iconic Space Needle.  While the Space Needle is synonymous with the Seattle skyline, Pike Place is synonymous with life in Seattle.  The market has been open for over 100 years and is still a bustling market in the heart of the city.  It is a major attraction that brings tourists from around the world.  Living in Vancouver meant that Seattle was generally an afterthought to travel.  I tended to travel through Seattle on the way to California on long road trips, or kept closer to the border in the city of Bellingham.  I have visited Seattle on a couple of tourist excursions from Vancouver but they tended to be short and while I was fairly young.  With a short trip to Seattle to get away from most of my friends in Vancouver, I took the opportunity to visit Pike Place and see what it was really about. 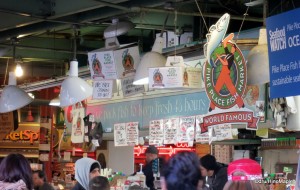 Opened in 1907 at the harbour of downtown Seattle, Pike Place is an icon of the city.  I couldn’t tell if there were many locals visiting the market but there was a very healthy dose of tourists visiting the market.  The market itself is pretty big and the main strip next to the water, along Pike Place.  It is a multi-story building with a typical market feel.  There are various local vendors selling local items such as jams, clothes, and other crafts and home-made products.  Then there is the food section of the market where you can get various fruits, vegetables, and meat. There is also the world famous Pike Place Fish Market.  They are the most famous fish shop in the market and their claim to fame is the flying fish.  In Japan, there is a specialty called Tobiuo, or in English, the Flying Fish.  It is an actual fish that jumps out of the water and has fins that act like a glider wing so it can glide for several metres close to the water.  In the Pike Place Fish Market, it isn’t the Tobiuo that is flying, but all of the other fish that are flying.  When you order a fish, the fish mongers literally throw a fish across the floor to be packaged.  It is a spectacle to watch but with all of the people walking around their shop, I decided not to wait to see it. 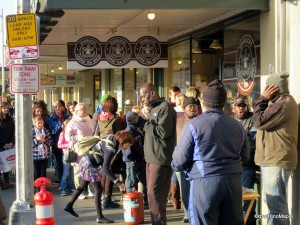 The other main attraction to the entire market is Starbucks.  Pike Place is the home of the very first Starbucks in the world.  In 1971, they opened on Western Avenue, near the northern end of the Pike Place Market.  They then relocated a block south, closer to the heart of Pike Place Market to their current location on Pike Place between Stewart Street and Virginia Street.  The location is still pretty small but they still use all of the original signage when Starbucks first opened.  You will see the old brown signs and the old logo.  The store itself is still very small and it is not uncommon to see lines heading out the door.  I never had the patience to wait on the very nice sunny Friday afternoon that I visited.  It was a nice place but the line was too long for me to even attempt to go inside.  I was reserved to just take a few pictures and then leave.  Most of the market is equally busy requiring your own patience hat to keep from getting annoyed if you are trying to do anything but shop slowly.  Expect lots of tourists to be wandering around aimlessly and generally blocking the way you wish to walk if you have an actual destination.  Thankfully most of the people are tourists who are also wandering aimlessly. 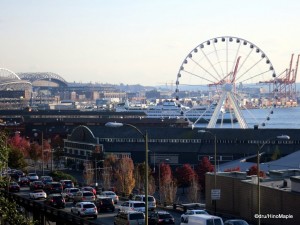 The best part of the Pike Place Market is the local talent.  All around the market, on the main level, you can see lots of local talent playing music or performing.  When I visited, I saw several different buskers and all of them were playing some sort of music.  You had single people playing a single guitar and singing, to a small group of a cappella singers in front of Starbucks.  Starbucks seems to be a major place for local groups to promote their music as I have seen several other photos of different bands singing and performing in front of Starbucks itself.  It is a very nice experience and the culture of Seattle really shines with these buskers.  Unfortunately due to the number of people at the market, I found it difficult to just enjoy the buskers and to listen to their music.  I was more worried about blocking other people than just standing there and enjoying the music.  It was a bit of a shame on my part for not doing my part to take it in, but I am not the best person when I am in a crowded area.  It is difficult for me to enjoy myself and all I could think about was getting out and just finding a quiet area to relax.  After living in Tokyo for such a long time, finding quiet places to enjoy the world is very precious to me. 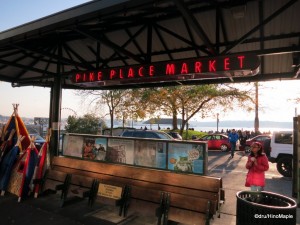 Pike Place Market (Park Next to the Market)

Pike Place Market is a very typical place to visit for any tourist in Seattle.  It was the one place where I could easily see Japanese people, and I saw more Japanese people there than I had anywhere else on my trip back home.  While the market itself is suffering from being too successful, I would still recommend anyone who visits Seattle to go and see the market.  It is a great place and a great atmosphere and a lot of the products you can get there are very much part of the local scene.  You will be supporting the local businesses rather than major corporations as well as helping the environmental movement.  A lot of the companies, probably not all, mention how green they are by talking about being environmentally responsible.  From buying products that were produced relatively locally to making products with little to no chemicals is very popular.  It is also one of the best places to find little gifts for friends as there are the typical souvenir shops with the typical “I ‘heart’ Seattle” like goods as well.