My annual fireworks pilgrimage in Tokyo lasts for 2 weekends.  The first weekend is to the Sumidagawa Fireworks with the Saviour and Sox.  It is a family affair that is fairly quiet.  The following weekend I do the exact opposite.  I go to what is essentially a HUGE party. 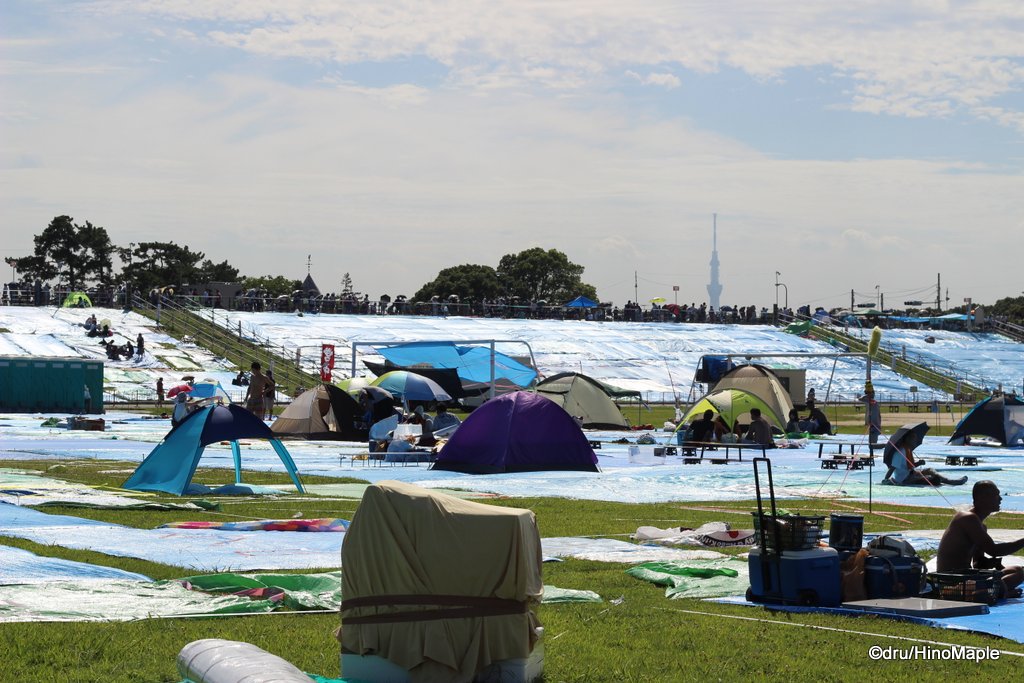 The party starts a day before, but I rarely attend this part of the party.  At 4:30pm on Friday, my friend is gracious enough to work on setting up the area.  He goes with at least one other person and they set about putting 12 huge blue sheets onto the ground.  Using nails and tape, they make sure the sheets are all put together nicely.  They do such a good job that even if it is windy, the sheets have almost no chance of blowing away. 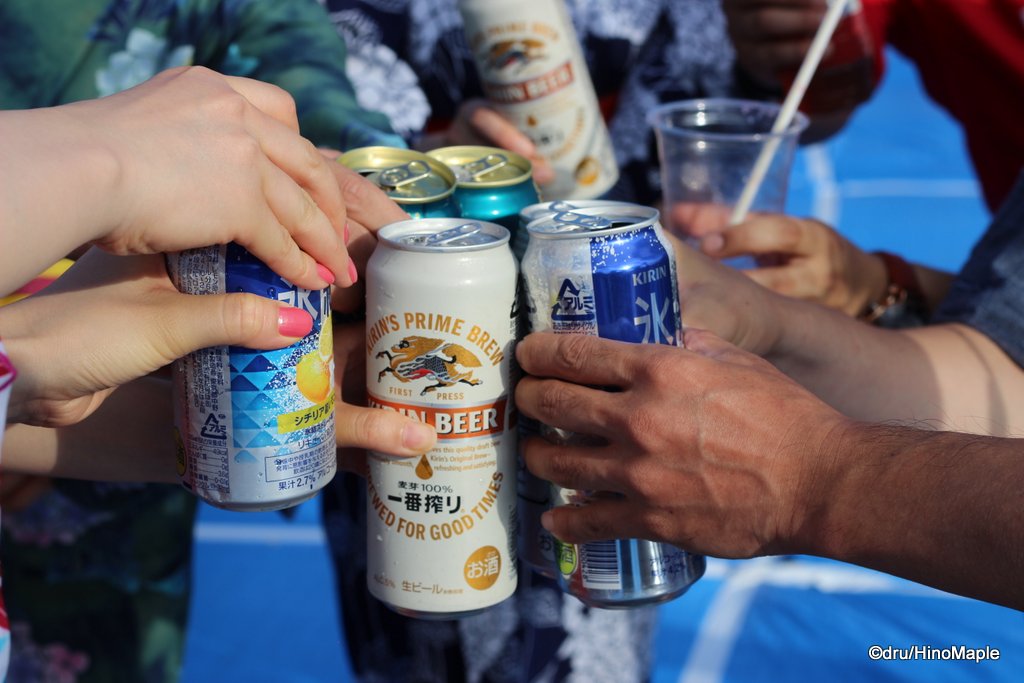 Getting the Party Started at the 2014 Edogawa Fireworks

When night falls, the second crew comes in.  This year there were fewer volunteers but we were lucky to have a couple girls camp all night on the blue sheets to protect them.  When the sun rises and the morning group comes, the overnight crew heads home to change and shower.  Thankfully, I was on neither the overnight or morning crew.  The advantages of working till 10pm, I can’t finish dinner and cleaning up around the house in time to get to the overnight crew.  At least that’s my excuse. 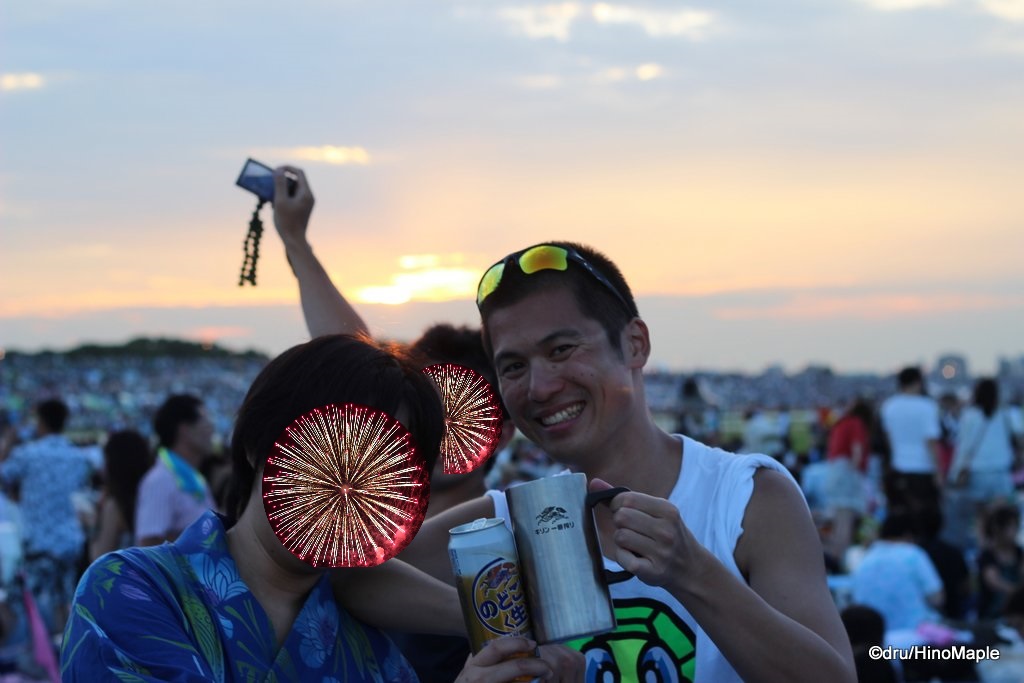 The walk from Shinozaki Station to the fireworks location took about 20 minutes and when pulling a case of beer, you tend to sweat.  I was sweating like a pig and out of breath as well.  I needed a little beer to help cool me off when I finally arrived at the site.  It wasn’t a fun trek, especially since I did it by myself but the best thing about arriving so early is that you can relax, tan, and not worry about the crowds. 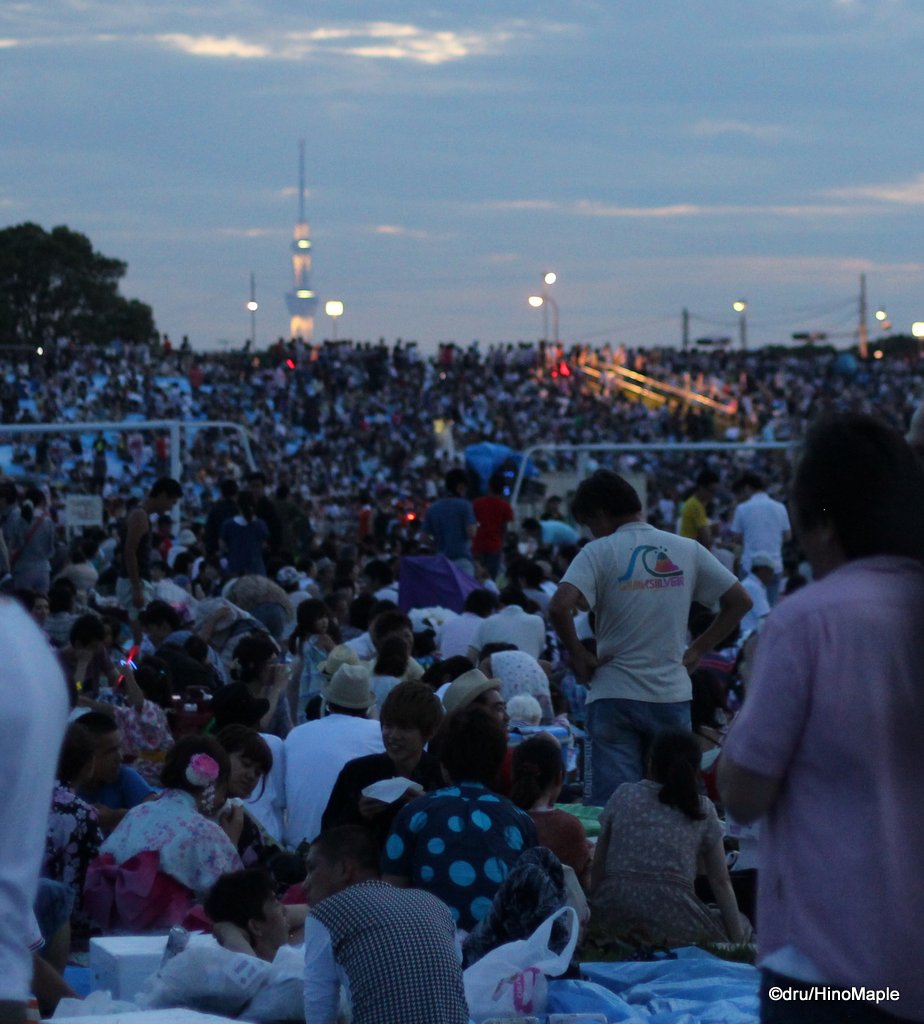 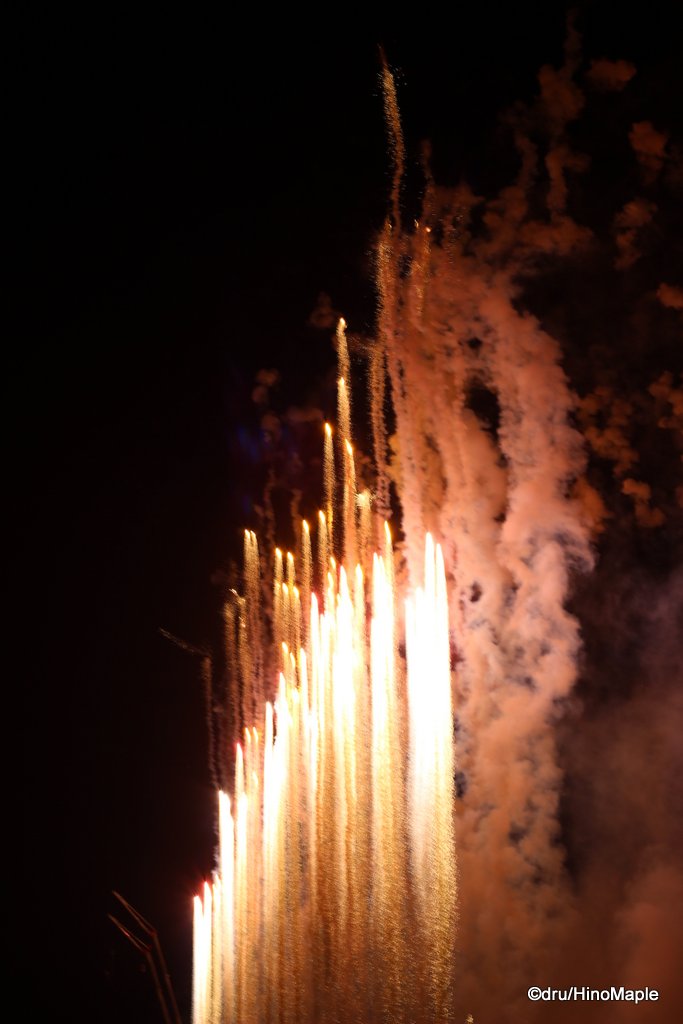 My friend John ended up working a little as one of his friends was doing a show there.  They asked us a question about “omiyage”.  We had 2 options, sushi shaped like shoes and green tea.  I did my part, dunk I might add, to talk about why I would want green tea and not the shoe sushi.  Let’s just say, I don’t eat shoes. 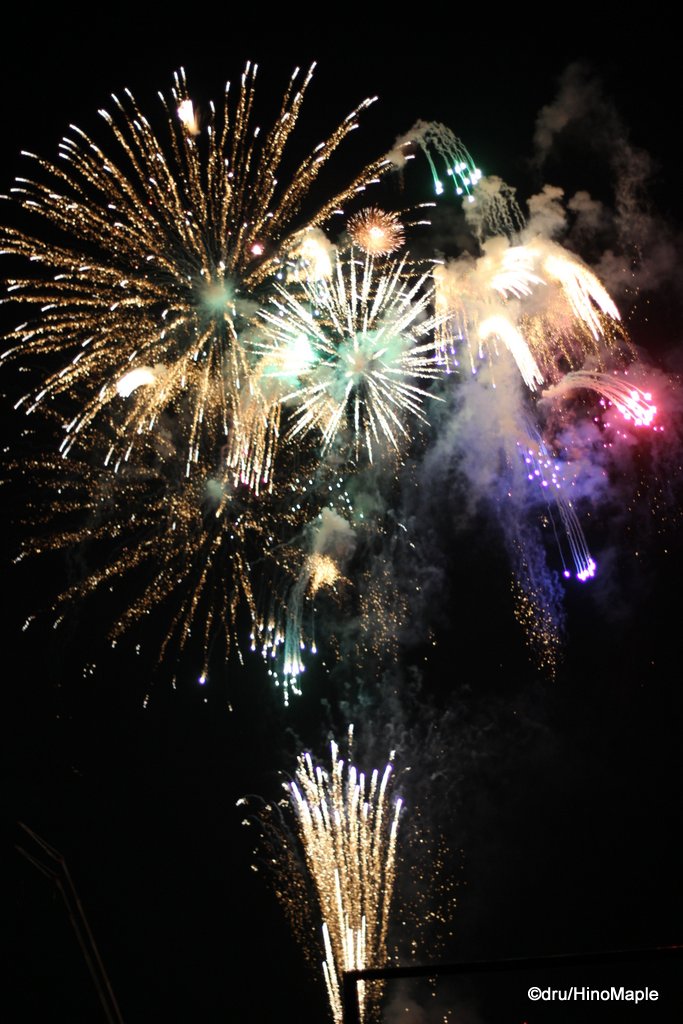 Once the fireworks got started, the entire area was packed.  We had over 300 people in our big group but in reality there were several groups in the party.  Space was at a premium and we had to jockey for positions.  I found a decent spot but with my camera, I was using a 50mm prime lens, I was a little too close to the action.  I needed to move a few metres back but I couldn’t do it.  I did the best I could with my camera and kept snapping photos.  I ended up with over 600 photos and a few videos. 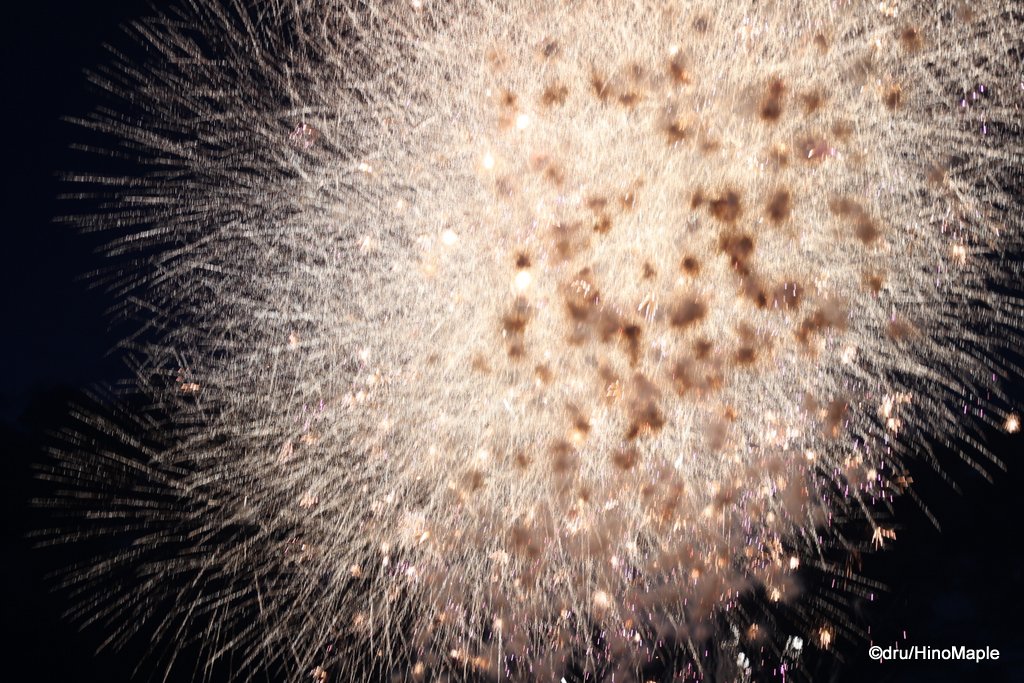 After the party, things were calm and people were jovial.  A lot of people decided to leave quickly and try to beat the crowds, but I have a different method.  I tend to stay a few hours and leave around 10:30pm as by then the crowds are a lot quieter.  The only problem with this is that I end up with garbage duty.  I stuck around with a few friends and we sorted the garbage a little so that it would be easier to throw away.  I was told that a small army of old men come in the morning to clean up but since I wasn’t the organizer, and I had no hammer, I couldn’t really clean up everything anyways. 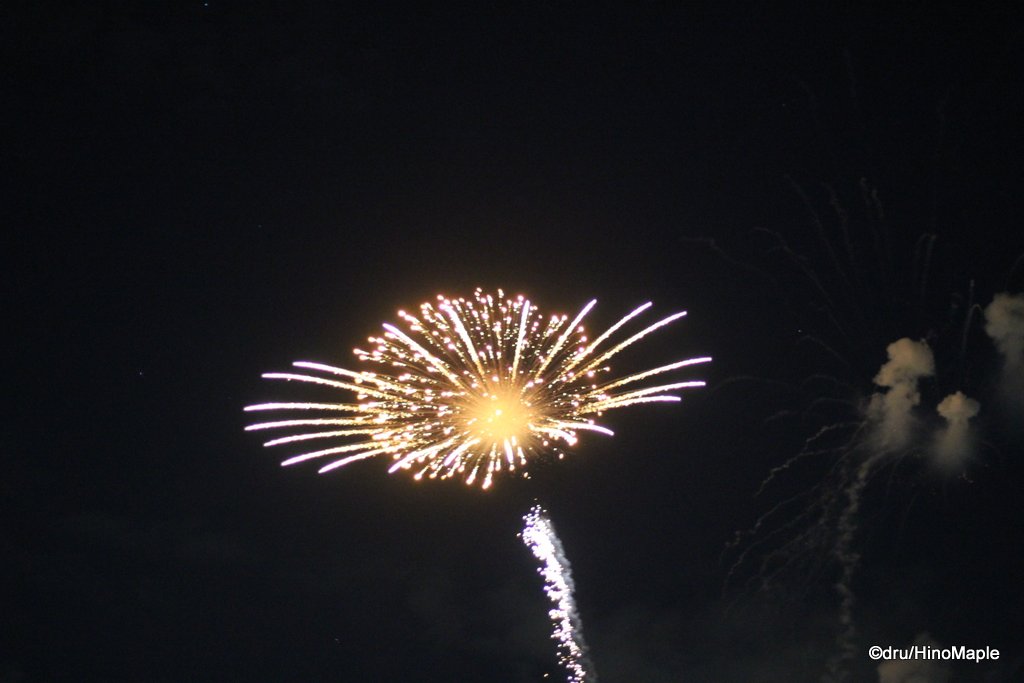 All in all, it was another great event and I can’t wait for it to happen again next year.  I don’t know if my friend will get a space again, but if he does, I’ll be sure to be there. 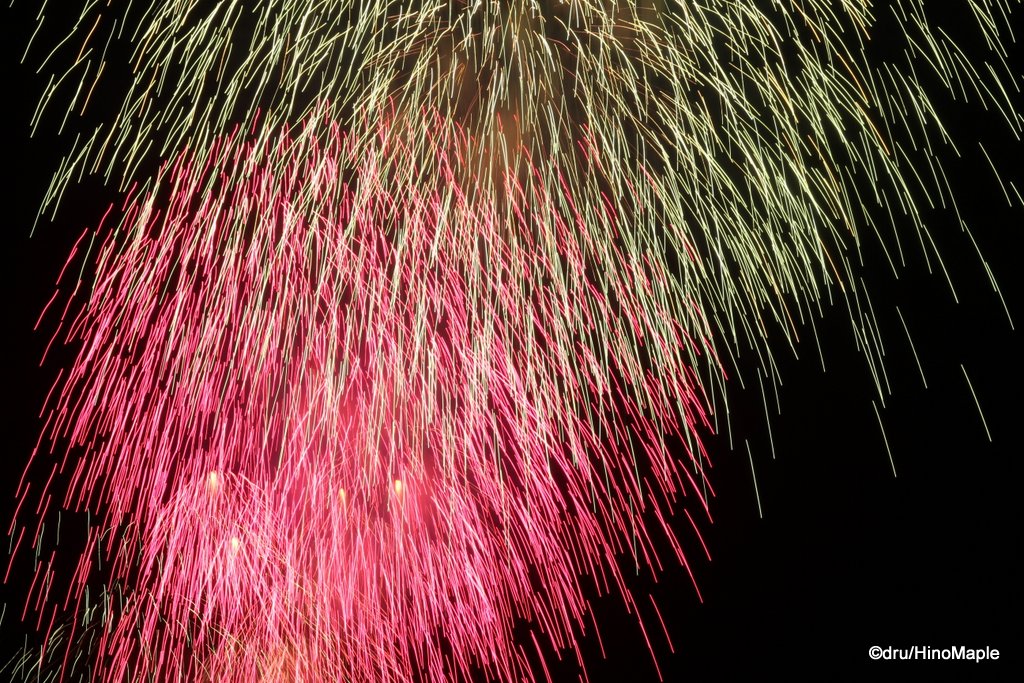