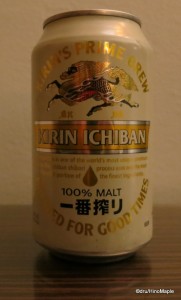 In Guam, I had a chance to try Kirin Ichiban Shibori.  I often avoid drinking Japanese beers when I travel as I want to try the domestic versions.  The Saviour loves Ichiban Shibori and saw the $1.99 price and felt it was too good to be true; it turned out it was.  I don’t know what they did but they completely changed the flavour.  On the side, the can says “brewed under Kirin’s strict supervision by Anheuser-Busch”.  I was not very surprised as many people told me that Ichiban Shibori is not the same in the US.  I was surprised at how different the taste is.  I don’t believe they added any rice to the recipe but the malts they used gave it a sweet taste.  It was similar to the Guam1 I tried.  I am disappointed in how they messed up the flavour but there really isn’t anything I can do about it.  I guess I won’t be buying Kirin Ichiban Shibori in America or probably Canada either in the future.  I’ll stick to the local beers.