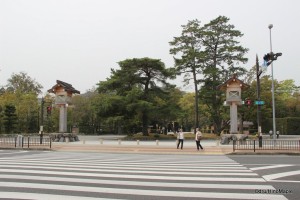 Ise Grand Shrine’s outer shrine, also known as Geku (in Japanese), is the lesser visited shrine between the inner and outer shrines.  It also happens to be the one I prefer more, mainly because there are less people there.  The Naiku (inner shrine) has a lot more to see and do, in general, but the Geku is a little smaller but more intimate.  I like both the Naiku and the Geku but if I had to choose to visit only one again, I would have to visit the Geku.  The fact that I didn’t have to fight as many people to get around and that the grounds could be visited in a much shorter time made it a lot more enjoyable for me.  The Geku is also home to a special museum that showcases a full scale replica of part of the main shrine, something you can’t see anywhere else as you aren’t actually allowed to look at the main shrine at either the Geku or the Naiku. 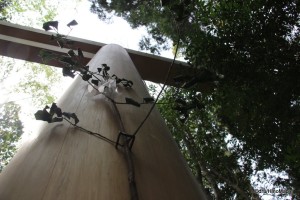 Torii at the Geku (Unique Branch Attached to the Torii)

Everything about the Geku is smaller than the Naiku.  The approach to the Naiku is Oharaimachi, a nearly kilometer long shopping street that leads to the main entrance of the Naiku.  For the Geku, it is about 300 metres and only takes about 5 minutes from Iseshi Station.  The shopping street is a little wider and there are a few souvenir shops but it only has a fraction of the tourists on the street.  It is still a little busy but nowhere near as busy and crowded as Oharaimachi.  For the famous shops, you can see the exact same shops at the Geku as Oharaimachi and you can buy the exact same items, but because Oharaimachi is on the river, it is more picturesque.  Oharaimachi is also older looking and has a longer history than the short shopping street leading from Iseshi Station to the Geku.  Once you get to the Geku, you won’t be able to tell how much smaller it is until you actually finish walking through the area.  The Geku actually reminded me of Meiji Jingu whereas the Naiku was more unique in layout. 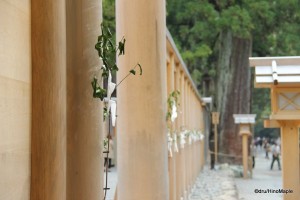 Outside the Main Shrine at the Geku

When you enter the Geku, you are immediately at the purification font where you purify yourself.  It is a short walk to get to the main shrine and while the shrine itself is basically the same size, as far as I can tell, as the Naiku main shrine, it is definitely easier to get there.  I was lucky enough to see a short prayer ceremony where a company was praying for good luck.  I didn’t ask, but I assume that it was a company praying at the shrine as it appeared that there was an older leader who led the group and the rest looked like directors of the company.  They were able to enter a restricted area between the public area and the main shrine to pray.  To get an idea of what it is like, the main shrine has two sets of fences.  The outer fence is to make sure the public cannot take photos of the inside.  The public is allowed inside the outer fence but there is a barrier and a closed gate inside.  The inner barrier is pretty hard to explain it but imagine a fence with a typical Japanese shinto style gate in the middle and a white cloth in front of the gate.  This is to prevent you from looking directly down the main path to the shrine.  Only the god is allowed to head this way.  The fence around the gate is not very strong and is mainly to keep the public out.  Photos are strictly prohibited in this area.  Inside the fence are large polished rocks.  There are both grey and white rocks.  The white rocks are symbols of the route to get to the main shrine and the main shrine is surrounded by the white rocks as well.  The other areas are full of grey rocks.  The business group walked out on to the grey rocks and up to the border of the white rocks that formed a path to the main shrine.  Even the priest didn’t cross onto the white rocks.  They just did a simple prayer, bowed for a second, and then left the way they came in.  I can’t imagine how expensive this simple procedure that took seconds would be for a company like this.  You can’t even go into the inner fence at all and you are only a few feet closer to the main shrine than the general public.  I doubt I’d ever pay for this service but I was happy to get the opportunity to see it. 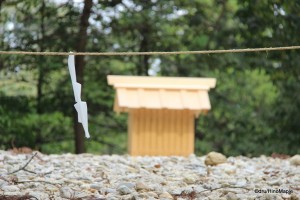 Other than visiting the main shrine, there are a few auxiliary shrines as well.  These are about as special as the auxiliary shrines at the Naiku.  Unless you really want to see everything, there isn’t too much to see here.  They can be nicer and it is possible to see everything, but it isn’t that important, especially if you have seen the secondary shrines at the Naiku like I had.  There are a few differences in the architecture at both the Naiku and the Geku.  While the differences are very small, if you have a sharp eye you can spot them.  The main difference in detail is the roof gilding.  There are two protrusions that come out from both sides of the roof to form a V that follows the angles of the roof itself.  These protrusions are slightly different in how they are cut.  At the Naiku, they are cut horizontally at the top while at the Geku they are cut vertically.  For the main shrine, there are a few other very small differences, but to be honest, unless you are a stickler to details, you probably wouldn’t care too much about the differences.  In terms of the Geku’s similarity to Meiji Jingu, the main route to see everything takes you directly to the main shrine before you head out the side and return to the front entrance, just as at Meiji Jingu.  When you get back to the front entrance you can easily leave but don’t forget to visit the museum. 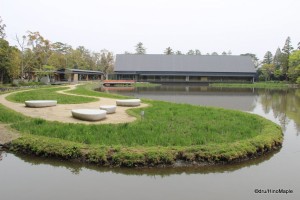 Sengukan, the new museum at the entrance of the Geku is located just behind the purification font and it is worth the 300 yen admission, even if you don’t speak Japanese.  I heard they have special recorded guides to help you but I decided not to do it.  The museum documents how the shrines are built every 30 years.  With both the Naiku and Geku main shrines being rebuilt in 2013, they decided to build the end section of the main shrine inside the museum and give all of the information about how the shrine is operated.  You start with a 15 minute video chronicling the shrine’s activities for a whole year, including the daily activities.  It is pretty interesting but knowing Japanese is very helpful.  You then get to see some of the images of the ceremonies as depicted on scrolls.  You also get to see how all of the metalwork was created for the shrine.  It is amazing to see how labour intensive it is to create the metalwork.  They start with a rough etching and they keep getting more detailed with each pass.  This is all done with a simple chisel and hammer and all done by hand.  You also see how the ropes and clothes are made and how all of the priests take part in making everything.  I don’t know if the actual priests do this or the people who are studying to become priests do this.  Finally you get to the main hall area where you can see a 1/8th scale of the entire Geku grounds and a full sized portion of the Geku main shrine.  It was amazing to see all of this.  You can get up close to the model and see all of the small details there.  You can also see all of the details in the shrine itself.  There is a special guide who explains everything to you, in Japanese, and points things out as well.  The Japanese people seemed pretty interested in it and I did see a few things I never would have thought to look at.  For example, the railings around the shrine are adorned with what looks like precious gem stones, or coloured stones, that have been polished and are the size of huge apples.  I believe the entire shrine was constructed without the heavy use of tools.  Most of the shrine was put together like a big puzzle that just interlocks so that nails are not necessary in most places.  The main areas where they needed nails they used gilding instead.  I’m not too sure on this information though. 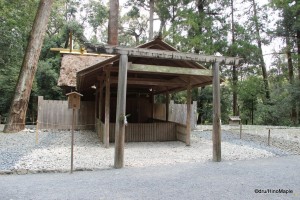 Old Secondary Shrine at the Geku

During my visit to the Sengukan, there was a big commotion in the front of the shrine itself.  While I was enjoying the relative peace inside, my mother was outside and wondering why so many people were running around.  I did notice more people than normal prior to entering the shrine and the people were wearing what appeared to be the imperial crest pin pinned to their suits.  They looked like politicians but I figured that since Ise is an important shrine, they would wear the chrysanthemum logo of the Imperial family as the Emperor is the only person allowed to visit the inner shrine itself.  When I exited the Sengukan, my mother informed me that an important person was there but she didn’t know who it was.  The person who was visiting as a special guest was Caroline Kennedy, with her husband, who was visiting to plant a dogwood for peace at the shrine.  I missed all of the commotion as I was enjoying the museum too much and took my time to go through it.  While I regret not seeing Caroline Kennedy walk past, I’m still happy I took my time in Sengukan rather than rushing to get out and see the US Ambassador to Japan for what would have been just a few seconds. 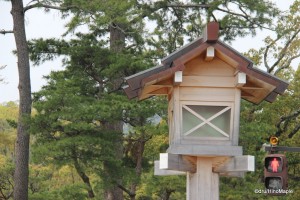 My overall impression is that the Geku is a lot better than the Naiku.  I do like both of them but the Geku is smaller and not as busy.  The fact that it wasn’t as busy as the Naiku meant that I was pretty happy with it.  I felt more at peace at the Geku, even though I didn’t have the place to myself.  If you have only one choice, you should visit the Naiku as there is more to see, but do take the time to visit the Geku and just enjoy the shrine.  Use the Geku to help find your peace as well as to better appreciate the architecture of the shrine and the adjacent secondary shrines.  The difference in the size of the crowds was enormous when comparing the Geku to the Naiku.  You won’t feel as stressed after a visit to the Geku compared to the Naiku and you may even feel you can enjoy the shrine itself a lot more.  I know I did.