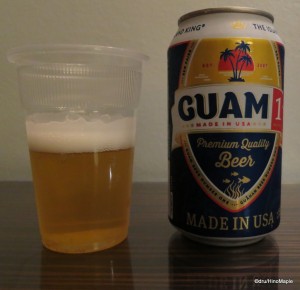 Guam1 Beer is a “Made in USA” beer that is available in Guam.  It is a bit of a strange product as it is a “Guam beer” but produced in Wisconsin.  Looking at the can, it is produced by a brewery called Solon Brewery.  It looked like and sounded like a tourist trap.  The label itself looks like a tourist beer with Guam1 presented prominently and a logo that reminds me of Malibu liquor.  On their website, they call it a “fruity pale lager” and it is very fruity.  In fact, it is too fruity for my own tastes.  Guam1 even goes so far as to create a legend regarding the beer.  They have a great tale regarding how a man and woman came together when Guam was having a civil war.  They combined the food of one village and the water from another and created a golden liquid.  It is a tall tale for sure and I’m not sure if it is even a real legend or one that the company made up for their brand; I would guess the company made it up.  It is still an interesting, albeit typical, story.  Overall, Guam1 fails to impress me.  It seems to be good for the heat and a good seller for people who want a souvenir from Guam.  For me, I wouldn’t give it as a souvenir.  I’d rather go for the Minagof from Ishii Brewing Co. which is a real craft beer rather than a commercial gimmick.  If Guam1 goes south, you will know why as having a good product is still the key to success, even for a souvenir beer.

PS:  Guam1 isn’t the only tourist beer on Guam.  There is, or was, a tourist beer called Guam beer.  This was made by a Korean company…