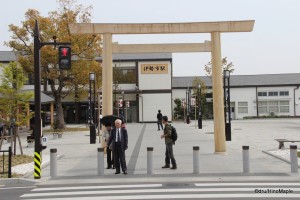 Ise is a small town located an hour and a half south of Nagoya.  It can easily be visited as a day trip from Nagoya but if you enjoy taking your time with things like I do, it is a 1 night trip.  I would liken it to visiting Nikko from Tokyo.  You can do it in a day trip but things will feel a little rushed at times and you may not be able to see or do everything you’d like.  In general, the town is not big at all but trying to get to everything is not that easy.  Like a typical out of the way town, transportation services are centred on the local attractions and information in English is limited.  I had a good time in Ise and I did everything that I intended to do, and then some.  I was able to see the Ise Grand Shrine, drink lots of beer, and enjoy the small town atmosphere.  It is great to get away from the big city but Ise isn’t as tranquil as I would have liked it to be. 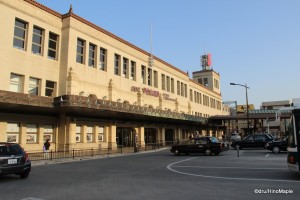 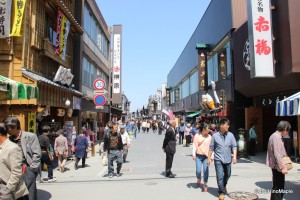 The inner shrine area is the more popular area.  Most of the tour buses go directly to the inner shrine where tours first start at the inner shrine and then go to the Oharaimachi, a long shopping street that leads to the inner shrine’s entrance.  This area is the main shopping area of Ise and is extremely busy.  I visited on a Monday and it was full of people.  I couldn’t believe how busy it was.  There were lots of obaachans and ojiichans walking and many families too.  There were lots of university aged kids going with their grandparents and I was trying to keep calm in the slow moving mess.  There are a lot of interesting shops from the most famous, “Akafuku”, is famous for its mochi wrapped in anko, but for me the Isekadoya shop was the most famous, especially for its oysters and beer.  The outer shrine also has a similar shopping street that is nowhere near as busy.  Most people will visit the inner shrine as it is more popular but the outer shrine is a lot quieter.  Being quieter makes it better, in my opinion.  I really enjoyed just walking up and down the main shopping street near Iseshi Station and could have enjoyed another hour there if I just wanted to burn time. 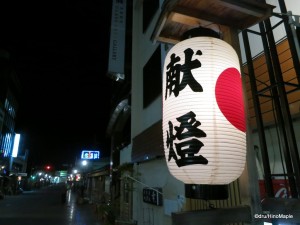 Ise (Near the Geku)

After 5pm, Ise starts to shut down.  This small town is so dedicated to tourism that it is almost a fault.  A lot of these “old people” enter in the morning, overrun the place, and vacate by the late afternoon to wherever they plan to stay.  I was shocked at the night and day, literally, difference.  I stayed at Oharaimachi shopping street till about 4:30pm and things were already looking quiet.  I started my tour of the street around 2 or 3, and by the end things were shutting down.  A lot of people had left and I felt as if I was leaving at the tail end of the rush.  I’m sure a lot of the shops were starting to close up at the same time.  After a short break at my hotel, I decided to walk around and try to get something to eat around 7.  It was a bit of a mistake as nothing was open.  I walked along the shopping street between Iseshi Station and the outer shrine but it was dead.  I felt as if it was a zombie movie and the zombies would be coming out any second.  There were no restaurants and nothing seemed to be open.  There were a few small dingy looking shops that weren’t so inviting to foreigners or tourists.  I ended up eating at a big chain izakaya.  It wasn’t bad food but it wasn’t really what I wanted to try to eat either.  It was a bit of a problem trying to find dinner but if you are a businessman, all you really need is a bowl of ramen to be happy.  For me, I was a little sad that there wasn’t much to eat at night. 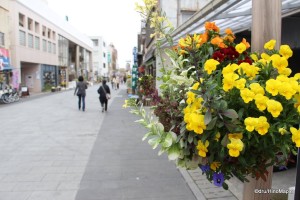 Ise (Near the Geku)

Ise is a great town to visit and I would love to go again.  I don’t know if I’d spend a night there and I don’t know if I’d go any time soon.  It is expensive and time consuming to go all the way there but I enjoyed my visit.  I will definitely want to see the shrines again and maybe get more souvenirs next time.  We’ll see how things go but it may be another 10 years before I make this trip again.  I do accept donations if you wish to fund my second trip there, but I’m sure that won’t happen.  😉