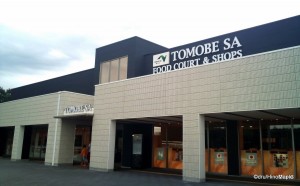 I had previously written about driving in Japan, but I never really talked in detail about the famous service areas of Japan’s extensive expressway network.  Japan’s expressways are huge, often elevated, tolled highways that crisscross the nation.  You can get to almost any location in Japan via the expressways and they are packed during the busy holiday rush seasons.  It is not unheard of to hear of traffic jams that span 40+ km that could make even the most patient driver go insane.  It is with this in mind that the expressway companies probably decided to build service areas, and by correlation the parking areas.  In Japan, the expressways are tolled and there are no in/out privileges.  When you are stuck on the highway going over 100km to get to your destination, lacking the ability to take a break can be horrifying.  In the past 5 years, I have been to dozens of different service areas and parking areas in Japan and have noticed a lot of them have changed recently.  Many are destinations in themselves and some are huge tourist attractions. 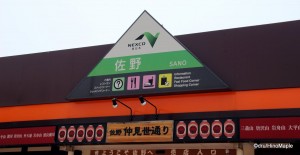 A service area (SA) is basically a rest stop on the side of the expressway.  They are often a couple hundred metres in length and there is only one way in and one way out.  SAs are often separated based on which direction of the highway you are going, so it is very common to see people stop at the same SA on the way in and on the way out.  While the SAs tend to be similar in style, the shops and things available at each of them are different.  Depending on the direction you are heading, you will be able to find different things.  Typically an SA will have a large washroom facility; a huge bank of vending machines; a self-serve café area; a convenience store/gift shop area; a restaurant; and of course a gas station.  Many SAs will also have an open area where temporary shops and festivals can be held.  SAs are an opportunity for the local community to get together and promote their local wares.  It is not uncommon to see local fruits for sale, similar to a farmer’s market, but you can also see local eateries selling their items similar to small food trucks that have become popular in North America these days.  While the inventiveness and quality of a North American food truck can’t be matched in the SAs, you can at least get a good variety of local food when you are at a SA. 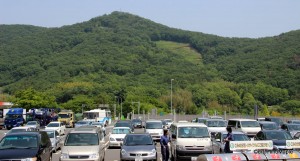 A parking area (PA) is typically a small SA.  They tend to be a no frills affair with nothing more than a few washrooms and vending machines.  There may or may not be any shops or gas stations.  The PA is really for people who need a break or those who just want to burn time.  When travelling by bus, I often see PAs but rarely stop at them.  Most tours will go to SAs as they offer more variety for their passengers and more parking for the buses.  If you want to avoid the crowds, you are better off at the PAs but you will also lose out a lot on variety.  At a SA, you’ll be able to get a nice hot meal, but at a PA, you’ll be limited to canned coffee or other hot drinks that are available at the vending machines.  Considering the popularity of the SAs, a PA may be your only choice at times, and sometimes when the traffic is terrible, a PA can be a saviour so that you can relax a little.  This is especially true in the holiday season when the traffic jams are immense and people need a break from the hectic highways.  SAs are often overflowing with people causing them to “close” and require people to start lining up to find a parking spot. 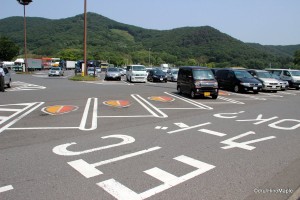 Special Parking for Seniors at an SA

When deciding on which SA/PA to visit, you have to think about where they are, when you want to stop, and if they are not too busy.  On a typical weekday, you don’t have to worry too much, but on a holiday, you have to be more flexible so that you can adjust where you stop.  Sometimes there will be a line outside a SA as there are no parking spaces left.  The expressway companies usually hire a few people to do traffic control during these busy periods.  They also have information on how busy they are on the highways before you even reach the SA/PA.  In some extreme cases, they do close the SA/PA due to the weather, but this is not a common occurrence.  If you are entering a SA/PA, it is important to know that there is no route for you to turn around.  They are all in/out affairs with no ability to turn around and start again if there are no parking spaces at the end.  While it is okay to skip the first few spaces and head to the middle of the SA/PA, I would avoid waiting till you get to the end as you may find out that there are no spaces left at all. 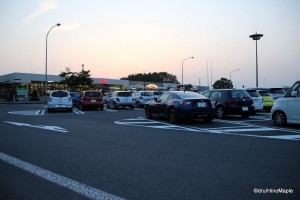 SAs have undergone a lot of renovations over the last few years.  They are now popular destinations for people out on a drive.  It could easily double the amount of time you need to get to your destination, but it can be a lot of fun to stop at each one and see what the locals have to offer.  If you don’t have time to stop at each town on your way to your destination, it is good to stop at the SAs as they will give you a brief taste of what the towns have to offer.  You may even be enticed to return to the region to see what else is there.  While I doubt there is much reason to return to an area near the highways, there are a lot of places near the highways that can be of interest.  Be sure to stop off and see what is going on and you can at least tick another destination off of your checklist. 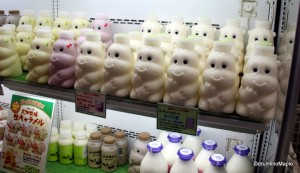 Local Milk at an SA