Earlier this year I learned of a new Kit Kat flavour called pudding Kit Kat.  This isn’t a very surprising flavour but what was surprising was the ability to bake it.  These Kit Kats are designed that if you put them into a toaster oven, you can bake them.  I had to try these when I saw them in the store and I grabbed myself a bag.  They looked pretty harmless and you could eat them plain if you’d like.  The experiment was well underway, but it took a long time before I had the right things to eat the Kit Kats. 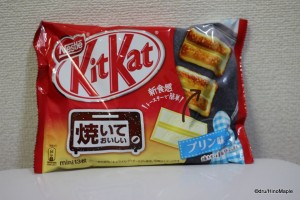 The first method I tried the Kit Kat was on its own.  I just opened the pack and ate it.  No baking, no frying, no Tabasco sauce either.  I just opened the mini chocolate covered wafers and bit into it like any other standard Kit Kat.  It was a basic white chocolate with a little pudding taste.  It wasn’t bad but pretty standard for Kit Kats; nothing really special here. 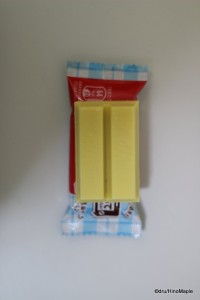 I put these bad boys onto the tray and put them under my microwave’s “grill” function.  I don’t have a toaster oven so instead of taking just 2-3 minutes, it took about 10.  At first the Kit Kats started to just melt, but I wised up and put them on the top rack and they baked pretty nicely.  The top started to look a lot like the photos on the packaging.  I took out a pair of Kit Kats and bit into them.  I was overpowered by the sugar and needed a good strong cup of milk to wash it down.  I didn’t have milk so water was the next best thing.  The texture was nice as it had a puff pastry texture due to the wafers.  The chocolate caramelized on top to make it more alike a creme brulee as well.  As I said, the sugar flavour was too strong for me and I didn’t really like it, but if you have a very big sweet tooth, it might be for you. 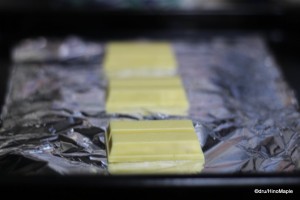 I was inspired to merge these baked Kit Kats with ice cream from Rocketnews24, my source for strange news in Japan.  The official Kit Kat shop in Ikebukruro was doing it so I figured I would do the same. It was a great match as the baked Kit Kats added a nice texture to the ice cream.  I had Haagen Dasz’s Caramel Crunch, which in hindsight was not the best choice.  Because the baked Kit Kat was so sweet, it just added to the sweetness of the ice cream.  The underlying saltiness of the caramel did help but I was still overpowered by the sugar.  I still enjoyed it all and the small sugar high I had afterwards.  Perhaps I need to go and get more flavours to try as this combo of ice cream and baked wafers was good overall.  I still have many more Bakeable Kit Kats to bake and ice cream is not something that will run out anytime soon in Tokyo. 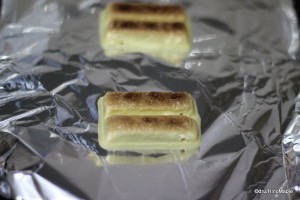