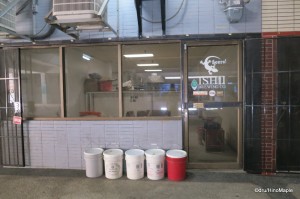 Ishii Brewing Company is a husband and wife duo with a small brewery located in Guam.  It is basically a one man operation with Mr. Ishii doing all of the brewing and Yukiko doing everything else, from what I could see.  Mr. Ishii has a reputation in the craft brew world having worked with Stone Brewing and Baird Brewing, including spending a lot of time working in breweries in Japan before moving to Guam.  For this reason, I would say Ishii Brewing is almost a Japanese “ji-biru” rather than an American or Guam beer.  Since Mr. ishii does live and brew on Guam, and Yukiko also works hard to promote their beer, it is also a true Guam beer.  The setup at Ishii Brewing is very small and feels like a “true” craft brewery.  I would imagine a good home brewer would have similar equipment, although some of the equipment is a lot larger than any home brewer would make.  I thought it was a great setup and something that is quite manageable on Guam.  With the temperatures the way they are, I’m sure he doesn’t have too many problems brewing up a batch, but making sure the brews are at the right temperature for fermenting and also keeping them cool during the aging process must not be an easy task.  It isn’t difficult to visit Ishii Brewery as it is a short walk from the Guam Premium Outlets, but it isn’t an easy place to visit either. 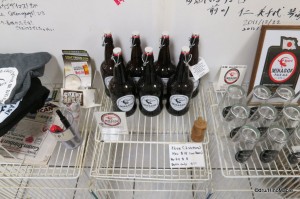 I first contacted Yukiko Ishii via e-mail and asked if I could visit at a special time.  They are usually open on Saturdays only from 1pm till 6pm.  She was very accommodating and while I asked to visit around 11am, she suggested 4pm as that was when Mr. Ishii was brewing.  The instructions on how to get there was pretty easy.  From the Guam Premium Outlets, you head towards the airport and at the main street, turn left.  It is about 5 minutes from the main intersection, but be careful as sometimes people aren’t very careful when they drive.  The Saviour was almost hit by an old man driving a beat up POS, but every other driver was pretty careful.  When you get there, you can’t imagine a brewery being located there as there just isn’t anything there.  During the day nothing is happening, but at night the place must come alive as there were at least a dozen clubs there.  I’m sure that they only open at night and it is a good thing for Ishii Brewing as they have a nice quiet place with ample parking during the day.  At night, they can go home and just relax.  When you enter, they mention they are under the “Marianas Trench Thai Restaurant”.  I swear it was actually a club and they aren’t really under the restaurant so much as they are under a different shop.  The Thai Restaurant was a good indicator but they are very close to the street, so head down the first staircase you see.  The parking lot doesn’t look like it has an underground section, but the above ground section is actually covering the underground parking.  Ishii Brewing is the second shop on the left of the complex.  Don’t be scared about heading down the stairs, but it is a little intimidating. 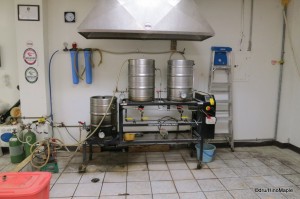 Once I got there, I headed straight in and I was hit by the heat.  Since Mr. Ishii was brewing at the time and checking everything, it was very humid.  I didn’t want to bother him as he looked very busy.  Yukiko was kind enough to show us around and took us to see the brewing setup.  It was designed for up to 2 barrels at a time.  They used kegs to get the boil going and each keg was capable of 57 litres, but my memory wasn’t very good and I could be wrong.  They make about 4 kegs worth of beer and enough for a few more bottles.  Most of the equipment is designed for 20L kegs that go into shops around Guam.  Most of the shops are in the tourist area and most of the beer sold is the Pale Ale.  The Pale Ale is a basic brew while the IPA isn’t as popular due to the high alcohol content.  I would say all of their beers are good but unfortunately the Guam market is not really mature for it yet.  When we were talking about the beer, I mentioned where I got their beer and how I first had the Pale Ale at Beachin Shrimp.  They mentioned it was a good location and that they were one of the better sales outlets for them.  Yukiko also mentioned that the locals don’t really buy their beer, but some of the service men do.  Their main market is the tourists.  Russians, Koreans, and Japanese are their primary target, although younger Japanese people don’t really buy their beer as they just want Miller and Bud Lite.  I’m not sure how I feel about that but I hope things change in the future. 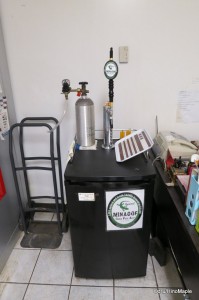 When visiting Ishii Brewing, Yukiko was very accommodating and was kind enough to offer me a sample of their porter.  It is a new brew that is only available on tap at one location, a brewpub located in the Hagatna area.  I was able to have their Pale Ale at several locations around Tumon, the main tourist area, and the IPA was available in a couple locations, but the porter was only available in Hagatna.  I was a little sad that the porter was so hard to find, but really happy to be able to get a sample of it at the brewery.  I was even more overjoyed when purchasing bottles of Minegof was a good deal at the brewery itself.  The brewery charges $18 for a 32oz bottle.  The bottles are very cool and a good keepsake.  They are good for at least 2 US pints and at about $25 at a few hotel convenience stores, it is not cheap.  For $18, you are basically getting the beer “at cost”.  The bottle is sold alone for $10 and refills are $8.  Taxes are all included.  I wish I had known that as I might have brought my bottle with me when I visited.  The only problem was that I did a LOT of shopping on the same day so carrying the bottle with me all day was not really an option.  If you do visit Guam, do note that you can get refills and if you do have a car, it is a great deal.  When you consider the cost of the beer in restaurants to be about $7 a US pint, it is worth it to bring the bottles back for a refill. 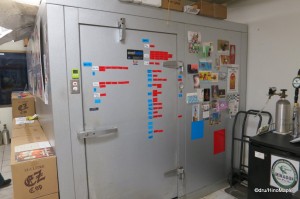 Ishii Brewing is still a very small operation and I’m suspicious of if they can expand even more based on their current equipment.  They are looking to hire an assistant brewer but I’m not sure if they can find someone capable or with the passion to do it.  If I was on the island, I would definitely consider it, but I’m not living on Guam and I doubt I can get the visa to work there.  Living on Guam is a nice idea but I really don’t know if I can survive on the island as I’m really happy in Tokyo, even with all the snow.  I do hope Ishii can grow and prosper and that their brand can continue for a long time for many generations.