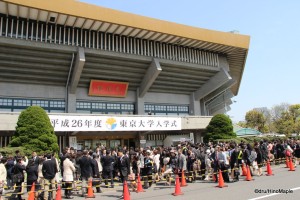 On April 10, I was touring around Chidorigafuchi and walked past the Budoukan.  The walk along the Chidorigafuchi path was really nice and stopping in the park near the Budoukan was a pleasant surprise.  The open field was nice to see and seeing a couple groups of students took me by surprise.  It was strange to see so many people there and things only got more and more crowded as I approached the Budoukan.  The Budoukan was, and will be, used for the judo events during the Tokyo Olympics and is currently popular as a concert venue.  Apparently Tokyo University also uses it for their entrance ceremony.  Walking past the Budoukan was a mad house.  Lots of students looking happy, and many looking bored, were all over.  Their parents and grandparents were looking very proud.  I walked around to the back area and could see a herd of students just leaving the area.  It was crazy to say the least.  Everyone was in their “recruit suits” and full of hope and ambition.  I couldn’t really tell all of them that they would probably run into a Southern Barbarian who would crush their dreams, or at least open their eyes to a harsher reality.  😉 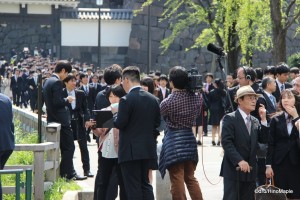