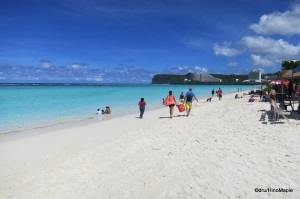 Tumon Bay is a long area that stretches from the Nikko Hotel in the north and the Hilton Hotel in the south.  The beach is part public and part private.  I was staying in the Guam Plaza Hotel, so I only visited the small section just south of the Westin Hotel and north of a club district, on Fujita Road, about a kilometre south of the Westin Hotel.  Access to Tumon Beach is not very easy and I usually headed in via a small lane north of the Plaza shopping complex.  There are two access points here, one to the north of a place called Nana’s and one to the south.  Both of them provide direct beach access and you are suddenly hit by the beautiful Pacific and the wonderful sand beach.  I also entered via the Outrigger Guam Resort by cutting through their pool area, but I’m not too sure if this is regularly allowed or not.  The beach is well maintained by the workers, hotels, and people in general.  If you are visiting Guam, this beach is more than likely your beach to visit, especially if you aren’t wealthy enough to stay in one of the beachfront hotels. 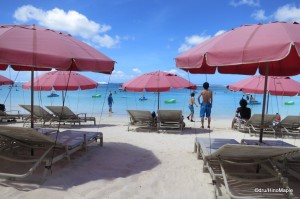 If you enter near Nana’s, you will suddenly be approached by a few people working directly on the beach.  There are two companies near Nana’s, Tumon Sports Club and ISA Aqua Sport.  They have several beach chairs and parasols for your use but you do have to pay for them.  I didn’t talk to anyone at ISA so I’m not sure of their system.  At Tumon Sports Club, they were pretty friendly people but they really try to upsell their spots.  It isn’t really cheap and they have 3 tiers.  On weekdays, I was quoted $30 for the front row, $25 for the middle, and $20 for the back next to the barbecue restaurant.  On the weekend, they bump the prices up $5.  I decided to pay it as I didn’t want to die in the sun.  You should go there early as it isn’t too busy.  As the afternoon hits, more people enter and it can be pretty busy.  I didn’t mind it being busy but I felt it was better in the morning due to the position of the sun.  As the sun starts to set, the parasols start to become useless.  By 3pm, the chair on the left was almost completely in the sun.  Both companies also have a lot of water sports available, for a fee.  They have several different packages, and since I was with the Saviour, they offered us the “couple’s package” which included the use of their water toys such as an inner tube or a paddle boat.  We just wanted to chill on the beach and do some people watching, so we just got a parasol. 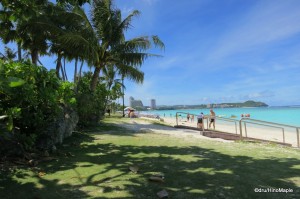 The beach can be “overrun by Japanese” as the reviews on various internet travel sites say.  I feel that this is a bit racist in thinking as people forget that Guam is very close to Japan and it is a very popular tourist destination for them.  There are several flights to Guam from many cities in Japan and they all carry hundreds of Japanese tourists.  The older generations are in Guam for the golf and the hot weather, and a huge number of young kids are there for the beach and sun.  On Tumon Beach, you can see the university kids and others having fun.  I saw several groups of guys, roughly 9 per group, and a few groups of girls, about 3-5 per group.  The guys definitely outnumbered the girls when I was there.  There are also families and a few couples but the number of Japanese guys on a party break from school was pretty high.  I have never been to Miami during Spring Break but I feel as if Guam would be very much like Miami during that time.  You can’t get angry at boys being boys.  They are there to have fun and to promote their “masculinity” to the world by doing stupid things.  The girls are there to enjoy friendship with one another.  To say that Tumon Beach was “overrun by Japanese” is akin to going to Miami Beach and saying it was “overrun by college kids”.  By the late afternoon, some of the mixed groups got together and the environment changed a little.  It became more and more alike a party beach and in reality, you can’t get angry about it as university kids will want to party. 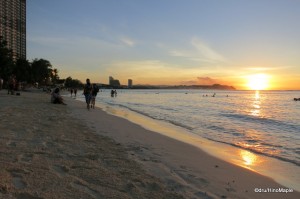 Tumon Bay beach is a great place to relax but you also have to take things in stride.  There are a lot of Japanese people on the beach but they aren’t the only ones there.  There were several Korean families there and I saw Chinese people around as well.  Yes, the Japanese are the largest group, at least when I was there, but I wouldn’t say it is always that way.  There was also a sizeable number of Russians enjoying the beach as well, but they seemed a little annoyed with the Japanese kids.  It was fun to see who was who.  The Japanese are the highest in number when I went so it wasn’t hard to see or hear them.  I noticed the Koreans would be at the beach in full skin covering outfits.  A lot of them had these swimsuits that covered their arms and had a hood.  It was a dead giveaway for the Korean tourists.  The Russians, well, somewhat easy to spot.  There were a few Americans as well, but they tended to be military on liberty and they have a certain swagger that is easy to spot.  The Chinese were surprisingly not at the beach when I was there, so I can’t tell what they were doing.  I have heard that Guam is changing to be more of a Korean destination and the number of Japanese people visiting Guam is going down.  I don’t have hard numbers but perhaps this is true.  In my own experience, I didn’t see this as much.