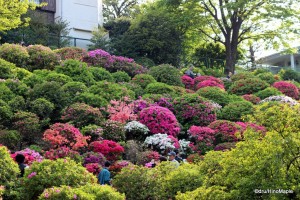 The Nezu Azalea Festival has been going on for about 45 years now.  The 45th edition started on April 5th and will run until May 6th of 2014.  I had learned about this just a few weeks before the actual festival started and made sure I visited.  I am not really a nature lover but I enjoy taking photos of nature.  It is a unique challenge to see the different plants in different angles and trying to get that perfect picture with the equipment that you have.  This year I visited the Nezu Azalea Festival twice.  The first time was on the 18th of April when it was very cloudy with a good chance of rain.  It was a good time to visit because a lot of the festival shops were not setup and there weren’t many people there.  I decided to go a second time when the azaleas would be blooming better.  I visited on April 23 and it was a night and day difference.  The 23rd was a mad house with a lot of people taking their time and getting in the way of everyone on the path.  There was a line up to enter the azalea park and at times it was a little hectic with people being a little confused as to what to do.  It was a very different experience to what I had experienced when I went to Nezu Shrine on days that a festival wasn’t being held. 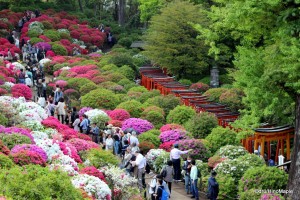 The entrance to the azalea garden is next to the main gate leading into Nezu Shrine.  The entrance is a little small and the number of people lingering at the entrance is high.  Sometimes you just have to raise your elbows and push your way in and out of the garden.  The garden itself is pretty nice but it isn’t something I feel a need to see again.  The main vantage point of the garden is from Nezu Shrine itself.  At the main entrance is a small bridge and most people take photos of the azaleas from that point.  If you pay the 200 yen entry fee, you can see the shrine itself from inside the garden and get close up shots of the azaleas.  I didn’t really want to go into the garden but I had to satisfy my curiosity.  I have to see everything I can whenever I do things; in part to better help you if you ever use my services.  I strolled around the garden going up and down the hillside and enjoying the flowers.  It would have been a lot better if 50% of the people were not there.  I felt more at peace when I found a small little corner of the garden where the hordes of people were absent.  By the end of my trip around the garden I was more stressed than when I entered! 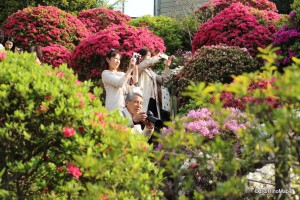 The shrine also has a lot going on during the festival.  There are the typical food stalls located around the back side of the shrine, and a couple located around the entrance.  They were selling some sort of sake manju and azalea senbe, but I chose not to buy those.  They also had a big tent set up so that you could buy lucky amulets and get stamps for your shrine books.  Their usual setup is in a small office on the side of the shrine, which is completely inadequate during such festivals and events.  If you want to just visit the shrine, I’d highly recommend going on a day when there is no festival happening.  Things are a lot quieter and you can enjoy the shrine at your leisure.  When the festival is on, it can be a mad house trying to do anything and with the hordes of people, so you really wouldn’t enjoy it as much.  With the peak of the azalea season being around the 23rd, things are bound to get quieter as the festival winds down, but Golden Week will probably be even busier.  If you do choose to visit during the festival, do so with caution and bring your patience hat.