Guam International Airport is the only civilian airport on Guam that I know of.  The official name is named after Guam’s first representative in the House of Representatives.  The airport is a very strange place as it is similar in style to Changi Airport in Singapore in the sense that it was originally designed as an open area.  Both departures and arrivals shared the same area but after 9/11 they had to separate both sides.  The terminal itself is not very big and information on services and how to get around is very sparse.  The official website has very little information about the airport terminal itself and there are no maps to help you prepare for your arrival or departure.  You are basically left to figure things out once you arrive. 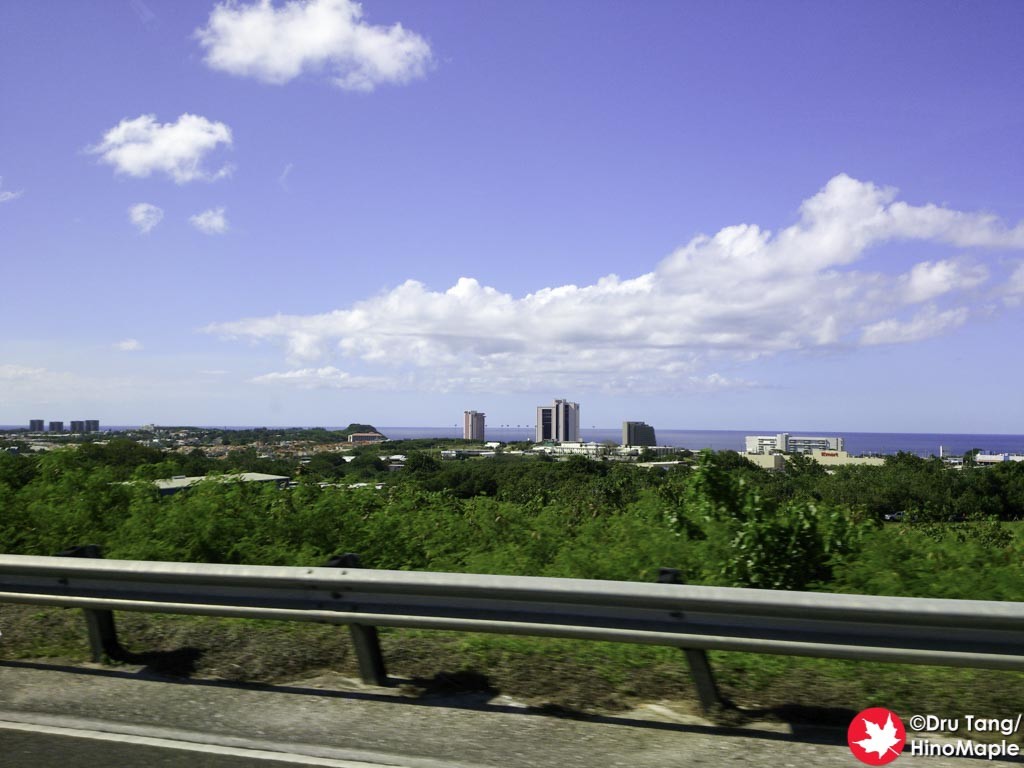 Approaching Guam International is pretty cool.  You tend to approach from the sea off the east coast near the tourist area.  You can see it as you approach the island.  Once you are over the island, you make a left to head north where you can see Hagatna as you land.  Once you land, you can see all of the planes already at their gate and you are soon at the gate as Guam International is a pretty small airport.  Since I arrived in February, the second I deplaned, I was greeted with Japanese screams of “atsui1” from everyone.  In my mind, I was thinking, “this is great!” and by the time we got into the building, everyone suddenly said “samui2”.  Typical Japanese talking about the ambient temperature as if they were complaining when in reality it was great!  Customs and immigration was not fun.  My flight from Narita arrived at 1400 Zulu and I heard it was the peak time for arrivals.  Many flights arrive in the mid afternoon and all of the people are stacked up in several lines.  The people are relatively friendly and most of the people will herd you into the main immigration hall where you just wait.  It took about 30 minutes to clear immigration and having all of your documents is important.  I was amused watching the Japanese people stumble through immigration.  When arriving in the US, most foreigners, except us Canadians, need to be finger printed and get a photograph taken.  It was funny to see the Japanese people being confused at the process and failing the easiest method of learning what to do by looking at the person in front of them and doing the same.  They take the fingers first, then the thumb; followed by a photograph.  I can’t tell you how many people couldn’t do this.  One person saw the thumbs up sign from the immigration officer and she gave it back to him before placing her thumb on the scanner.  It was cute for sure.  Another girl almost forgot her passport.  She thought everything was done and took 2 steps before the immigration officer stopped her.  She was noticeably embarrassed.  When it was my turn, I just handed everything in, waited for a couple questions, and I was done.  Canadians have an easy time entering America.  I only needed 1 form which was for customs.  I did fill out one of the two immigration forms, but it turned out I didn’t need it. 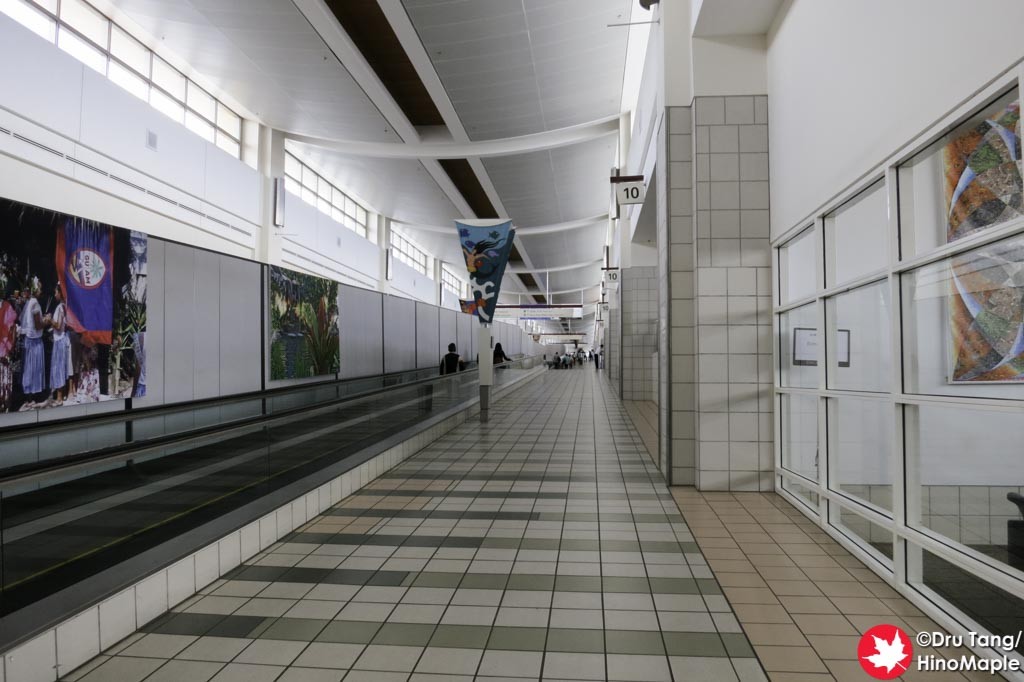 Guam International Airport (Note: Departures section, not arrivals. Arrivals are behind the wall on the left)

Arriving in Guam, I had no checked luggage so I headed straight to customs.  There is a huge questionnaire that you have to fill out and I only had 15 minutes to do so before we started our descent.  It was long and very detailed.  After you clear immigration, the signage is not as clear.  You have to head down the stairs, there should only be one set, and then you are in the baggage claim area.  You then see the customs area almost next to the stairs.  The baggage claim and customs area is very small making it easy to overlook the customs section, especially if you don’t need to pick up any bags.  Travelling with the Saviour, we decided to go one at a time, and when the customs officer saw she had no bags, he was about to ask several questions.  I shouted from where I was standing that we were together and it was smooth sailing after that.  All services are handled by different departments.  Immigration was handled by the US government, so the officers were very stone faced while customs was handled by Guam so the people were pretty jovial.  After that I was in the public area and had time to rush to the washrooms to change and then find a taxi.  The taxi stand is not very easily marked.  The sign to get out of the building to the taxi stand was easy but the location of the stand itself was a bit confusing.  They have a small building with information but I was told to just run up to the curb and someone would help me.  It was the easiest method to get a taxi and I was soon at my hotel within 15 minutes. 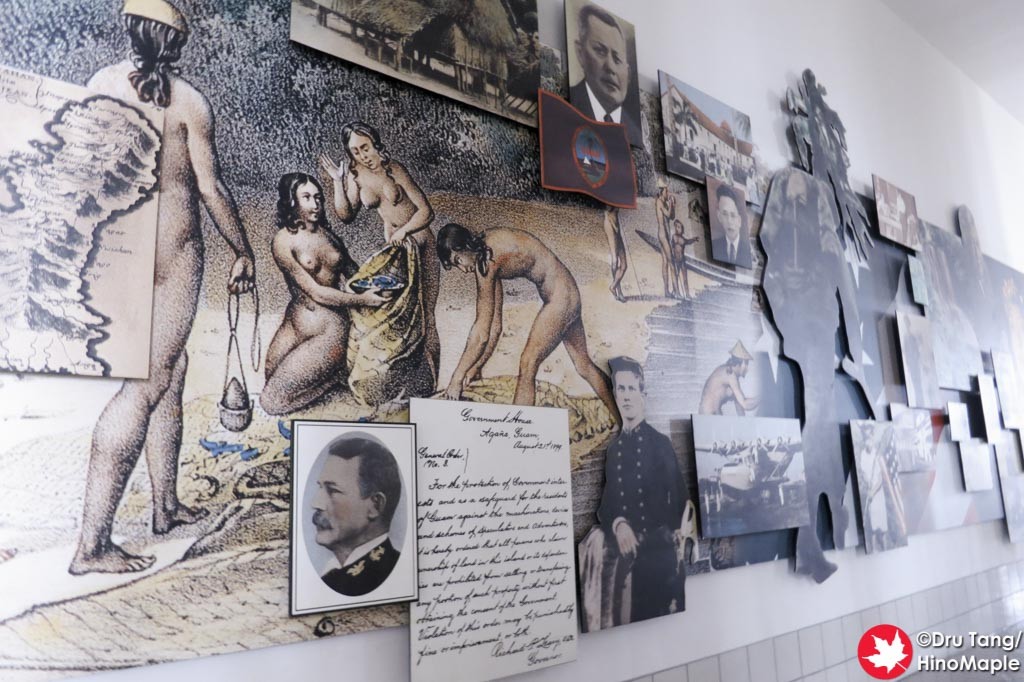