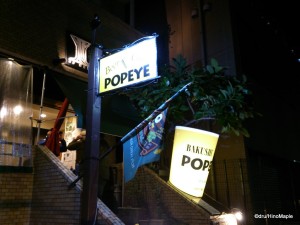 Bakushu Club Popeye or Popeye’s as I have always known it, is one of the most famous craft beer bars in Tokyo.  Started in 1985, Popeye’s has grown a lot over the decades and is one of the places to go for beer in Tokyo.  Most craft beer guides and beer lovers always talk about Popeye’s.  I had been meaning to go for a couple years and finally had the opportunity to see what it was all about.  I must say that with all the hype, I was expecting a lot and I tried my best to not have my hopes up too high.  I was unfortunately let down by my overall experience and may not be able to recommend it, although I will give it another try as I don’t live too far from Popeye’s. 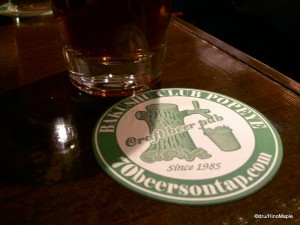 For my trip to Popeye’s, I only had beer so I can’t comment on the food.  The beer selection was vast and if you want to try many types of beer, you have to go to Popeye’s.  The first problem I had was with the type of beer I was drinking.  I ordered a Swan Lake Cask Amber Ale.  I often don’t get cask ales and since Popeye’s has a large selection of casks, I decided to give it a try.  Swan Lake also has a good reputation so I thought it would be good.  The beer was a little watery at first but the aftertaste was really good.  I felt the beer was overly flat and probably not conditioned properly.  I have had flat beer, or near flat beer, but this was too flat for me.  My second beer was a regular Preston IPA from Utsunomiya.  I wanted to try the Preston brand beer as they also have a good reputation.  The IPA was pretty good and the carbonation was a lot better but perhaps my own perceptions made me feel as if it was still relatively under carbonated.  I felt as if they didn’t have the right setup for their beers and they suffered due to this situation.  Maybe they have too many beers and can’t keep things regulated properly.  It may also be because they are trying to be more British with their beers as British beer drinkers tend to enjoy less carbonation in their beers.  I can’t say for sure why my beer felt flat but either way I wasn’t as impressed by the beers when I was there. 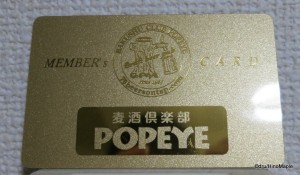 The atmosphere of Popeye’s is interesting.  It is very dark with a lot of wood colours.  I was surprised at how busy they were on a Wednesday night.  I was crammed into a very small table and didn’t have much room to move around.  They were not as busy when I left after 10pm but they were still busier than I had expected.  They had about 5-8 servers and unfortunately my server was really moody.  She didn’t smile and just gave a blank look as we ordered.  I was unimpressed by their service but at the time I didn’t care.  Personally, I think they could do more to have a bigger area and perhaps friendlier servers but they were so busy that they needed to cram more people into the small space and the servers were probably tired from all the hard work running around and getting beers for everyone.  I was more annoyed with the fact that I was handed a piece of paper to write my name, e-mail, and address.  I wasn’t annoyed at first but I was annoyed by the fact that they didn’t tell me that it was for a membership card that I didn’t want.  They didn’t explain anything; they just threw down a couple pencils and paper and expected me to know what it was for.  Nothing was written on the paper regarding what it was for and I didn’t know till they handed me a gold Popeye’s member’s card.

Popeye’s is very popular and I can see why.  They have a huge variety of beers and it allows people to sample many types of beers.  People also tend to have a general lack of education when it comes to beer as not many people brew beer by themselves or take the time to learn about it.  I was a part of this group until last year and I always worry that I am becoming too elitist when it comes to beer itself.  When it comes to the reputation of Popeye’s, I feel too many people say good things about it so other people feel a need to agree with them.  Japanese people love a lot of things but they unfortunately follow the herd when it comes to opinions and fads.  The novelty of going to a bar with over 70 beers on tap is pretty cool and it did get me interested in going but they don’t have the pull to keep me there or keep me as a regular.  I will give them a second chance to improve in the future but I doubt I’ll make it a regular experience.  I’m happy with my local Beerich Yeast for good beer near my place and Devil Craft for the overall experience.