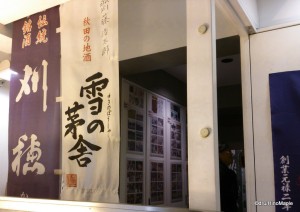 I learned of Kamozou from Rurousha on her blog.  She was posting about the Kagurazaka area and we were chatting in the comments as always.  She mentioned a famous sake bar and it immediately piqued my interest.  I found out it was part of Noriharu Nozaki’s group of restaurants.  From the article, written in 2011, Mr. Nozaki has 4 restaurants at the moment and this was the second one I had visited.  I had stumbled upon his signature Nozaki restaurant in Shinbashi in early 2013 and thought it was a great place.  Both shops are pretty similar but I will focus on Kamozou first as it was the most recent shop for me to visit.  I will probably try to visit Nozaki again in the future but I’m not too sure if I will. 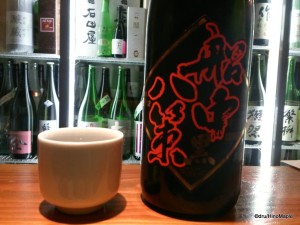 The reason anyone should visit Kamozou is to enjoy the sake, rather nihonshu.  It is a place that is famed for its list of nihonshu as well as a very Japanese food menu.  There are literally over a hundred different types of nihonshu at the bar and to attempt to taste all of them in one night would be a challenge only a robot named Bender could achieve1.  For my dinner at Kamozou, I could only achieve the task of drinking 6 servings of nihonshu.  It was not an easy task but the good food did help me to keep drinking and the variety of tastes from each nihonshu kept me wanting more.  I started off with a very sweet nihonshu.  I enjoy slightly sweet nihonshu but the one I had was too sweet for my tastes.  It was actually served in a champagne style glass, to my surprise.  I then went the complete opposite way and had a “man’s” nihonshu from Kochi.  Unfortunately I can’t translate the names of the nihonshu, so the photos I put here will have to do.  I enjoyed this nihonshu from Kochi a lot.  It was a very typical tasting nihonshu without the roughness of other types.  I then bounced around from Hiroshima to Kochi and came to the realization that those two areas are where my favourite nihonshu brands are made.  I don’t hate other brands but I couldn’t believe how much I enjoyed the different types they suggested.  I started off with asking for recommendations but after I just shifted to ordering based on region.  I was even excited to try Kamoizumi from Hiroshima, a nihonshu brewery that I couldn’t visit as they were not open when I was in Saijo.  If you are worried about what to drink, just ask the friendly woman who is behind the bar and I’m sure she can recommend a great one for you. 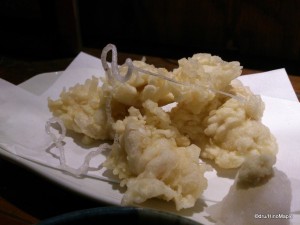 You can’t go to a Japanese bar without getting a little food.  The food at Kamozou is very Japanese.  They have daily specials and a lot of interesting regular items too.  If you are looking for typical Japanese food, this is the place to go and it won’t break the bank either.  The quality is very good and all of the dishes are well made.  Many of the dishes are designed for nihonshu and it really shows.  I started off with shiroko tempura.  The kanji of shiroko means “white child”.  If you don’t know what it is, it is basically the semen sack of a fish.  In English, it is actually called milt, and it is a very, for lack of a better word, interesting dish.  It has the consistency of creamy custard and since I had it as tempura, it had a crispy exterior and a gooey interior.  I thought the taste was fine but I just had trouble getting past the idea that I was eating fish semen.  I’m not afraid to try new things, but it was a mental image that gave me troubles to keep eating it.  When you go to Kamozou, don’t expect them to have shiroko as it was a seasonal special of the day.  Expect some of the dishes to be sold out, especially the seasonal dishes and the specials of the day as they often come in limited quantities.  While the shiroko was the main event in my meal, I also had other delicious dishes such as tamagoyaki with shirasu and grilled katsuo skin.  The dishes are not exactly large but they aren’t overpriced either.  Go crazy and order whatever you think is worthwhile. 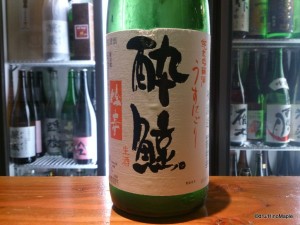 Kamozou is a great restaurant and I definitely want to visit again in the future.  I don’t often drink such high quality nihonshu in bars and restaurants but if I ever want high quality nihonshu, I know exactly where to go.  Kamozou and Nozaki are great places to visit.  I would recommend a first time visitor to go to Kamozou as it has a more relaxing atmosphere.  The entire restaurant looks small but it is actually larger in the back.  I personally prefer to sit at the counter as you can enjoy looking at the nihonshu the entire time you are there.  Unfortunately, Kagurazaka is not a convenient place for me to visit as I no longer live on the Oedo Line and I would probably want to walk in from Iidabashi Station.  It won’t stop me from going to Kamozou but I may try to go to Nozaki next time instead.