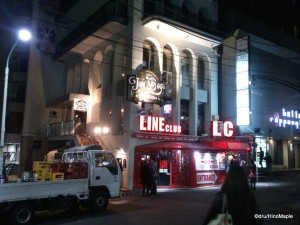 Two Dogs Taproom is an ambitious project to create the second brewpub in Tokyo.  There are a few taprooms in Tokyo but many of those companies don’t make their beer in Tokyo.  Two Dogs aims to take on T.Y. Harbour; the only other brewpub based in Tokyo which opened in 1997.  Two Dogs opened at the end of October 2013 in the heart of Roppongi’s club and bar district and I visited them in mid-December 2013.  Two Dogs is located in a prime location just off the main street with a lot of potential to pull in a lot of business.  They are located far enough that it is a little quieter but it can also cause problems bringing in more people as it is not so easy to see from the main street.  In general, their business model seems pretty sound but they definitely show signs of being a new company that had rushed to open rather than opening properly.

Update:  I was told by Mark, in the comments below, that Two Dogs is not yet a “true” Taproom.  I don’t doubt that the owners created their own recipes for their own beer but they are contract brewing under Brimmer Brewing.  Without anymore information, I cannot verify if they do their own brewing, watch the fermentation, and do the bottling on their own or not.  I can only say that I hope they build upon their humble start and grow quickly to be more independent.

I must give a full disclaimer about this post as my visit to Two Dogs Taproom was influenced by the fact that I was there during a party and we reserved the entire taproom.  We were given a course of food as well as an all you can drink menu.  My experience was affected because Two Dogs only has Yebisu beer with their all you can drink course.  I like Yebisu beer, but for a taproom to offer an all you can drink course and not offer their in-house beer was a bad point on the taproom.  They also charged full price for all of their craft beers on tap regardless of where it was produced during the party.  I was appalled that they didn’t even over a slight discount of 10-20% during the party for the beers that they produced.

[Author’s Note – I have modified the above paragraph since publishing in an attempt to be clearer about why I had so many problems at Two Dogs.  I wish to emphasize that this review/post probably won’t reflect what would happen if you visited on a regular day]

[Author’s Note 2 – I have slightly modified the above paragraph again but would also like to explicitly mention that I in no way expected to have craft beers as part of the party set.  I was only hopeful for a small discount from the full price of their beers so that I could enjoy the wide variety of craft beers that they had on tap, specifically their beers.  I do not know what the margins are for Two Dogs and I cannot know if a small discount would cause them to lose any money.] 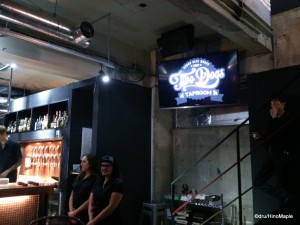 This is another post about a brewpub, so let’s start with the beer.  Two Dogs had 3 of their own beers on tap when I visited.  I had a choice between the American Wheat, Amber Ale, and the Red Ale.  I asked the barkeep for the hoppiest draft they had that was their own beer.  I was shocked that they didn’t know or didn’t want to explain the flavours of their own beers.  The guy I ordered from had no idea what to recommend and asked another guy for advice.  He recommended me an IPA that wasn’t from their tanks.  I rephrased my question and asked about their beers specifically and they said the “Amber Ale was the strongest”.  I was disappointed in their lack of knowledge of their own brews; rather their inability to explain the flavours to me.  I went with the Amber Ale anyways and it was a nice selection.  It was a balanced beer that has a nice level of hoppiness.  I wasn’t very impressed as it was only on par with most of the other craft beers I had from other breweries in Japan.  In the last year I have been improving my palate so that I could understand the different tastes within beer itself.  I am no expert but I know what I like.  I was neither impressed nor let down by their beer, but my expectations were high.  It is still better than most of the beer that you can get in the supermarkets.

For the party, they had a buffet style dinner and kept the food coming, but their kitchen was overwhelmed by the number of people trying to eat at the same time.  They have a good kitchen and the small amounts of food that I could get was pretty good.  There was a variety of deep fried fish, some wedge cut potatoes, wings, and other American brewpub dishes.  They also had good pizzas cooked in a wood fired oven, but those were taken faster than they could make it.  The design of the actual taproom was pretty good.  They have 2 levels with the bar on the first floor and the kitchen and restaurant style seating on the second floor.  The second floor is a more intimate and quieter area of Two Dogs and you can see them making their pizzas and other dishes in the open style kitchen.  The overall design and look of the taproom was great and they put a lot of thought into making things look very American.  Even the servers and bartenders were noticeably foreigners providing a taste of American service in Roppongi. 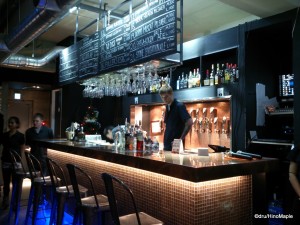 There are many problems with Two Dogs but the biggest problem when I visited was the food service during their parties.  It was a bit of a mad house at times as people lined out the stairs on the second floor and people were just crowding the buffet table waiting for food to come out.  This is due to the fact that I was there for a party so their actual regular service is probably a lot better.  I also had a big problem with their servers.  They really advertise that they provide an “American” experience but the owners didn’t train their servers to also take the good points of Japanese service.  The servers often had an “I don’t care” attitude mixed with a friendly and playful attitude.  They didn’t look organized and looked primarily occupied with each other as well as trying to see what crazy things the people at the party were doing.  They also came off as being uninformed.  Their taproom needs to be able to explain the flavours of their beers, and at the very least the flavours of the beers they produce.

Two Dogs has the potential to be a great place but they really show how young they are.  The place looks great and it can easily be packed every weekend.  They worked a lot on looking good but they lack the ability to follow through on their promise.  The entire taproom felt rushed as they didn’t pay attention to the details.  For example, the list of beers available features Yebisu beer as the #1 beer and Sapporo Premium White as the second.  I can understand why as they probably have a contract with Sapporo which requires them to put Sapporo beer at the top, but to have Paulaner as the third beer on the list is pretty silly.  Their own in house beers were listed at 4, 9, and 13 respectively.  Out of these, only #4 is listed at the top end of the board, so they obviously didn’t put enough thought into this.  I feel like the servers at Two Dogs didn’t know what the beer tastes like and probably never tried it.  Rather than telling me the flavour notes of their beers, they just said “this is the strongest”. 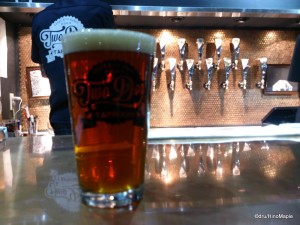 The same problems continue if you visit their website.  The website looks beautiful but there are little things they didn’t do properly.  Trying to click on any of the menu items requires patience as they created text links and you have to click on the text rather than an imaginary box around the text.  The background image looks great and goes with their image but it is static so as you scroll up and down the page, the background image doesn’t move.  It looks clunky from a design standpoint but they had the right idea.  They also committed a cardinal sin when it comes to creating a website.  They have bad links.  This website is not perfect but I worked hard with my design team and they created a uniform look and all of the links work.  There are no buttons or links that link to something that doesn’t exist.  Two Dogs really dropped the ball by not placing the proper social media links; instead they left links to social media for a company called Wix.  Wix is a website building company where you can use their tools to create your own website.  This works for small companies but Two Dogs didn’t bother to check their own links or kill the links.  It appears they are using a template and they forgot to remove the things that weren’t needed.  Some of the links are also inconsistent with the design flow.  Like their taproom, the website looks like a rush job.

Update (2015-10-19):  Two Dogs have updated their website since the time of writing this post.  They have changed everything that I had an issue with and looks a LOT better.  Do note that this was originally posted on 2014-02-23 and had all of these problems at that time.

The potential at Two Dogs is there, but they show a lot of problems at the same time.  I still want to return and give the taproom a better go as a regular customer but I think I’ll wait till the servers have a lot more experience and the beer they make has matured a little more into something they can call their own.  I will try to return later in the year but unfortunately they had so many rookie mistakes that I may wait another year and try the other taprooms around Tokyo before I return to Two Dogs.