On a chilly autumn evening, I decided to go to Yokohama to check out a couple brewpubs.  I started off at Thrash Zone, a very punk inspired brew pub, and ended up at Bay Brewing, something more commercial.  It was a very different experience to visit each of these brewpubs as both have a very different clientele.  Unlike some of the bigger tap rooms around Tokyo, these brew pubs are the real deal.  They probably brew beer specifically for themselves as I had never heard of their beers outside of their specific shops.  They don’t trade beers between shops either.  Bay Brewing itself has a distinctly Japanese take on craft beer and their theme seems to clash a little with the decor, but it is a pub that I would gladly revisit again. 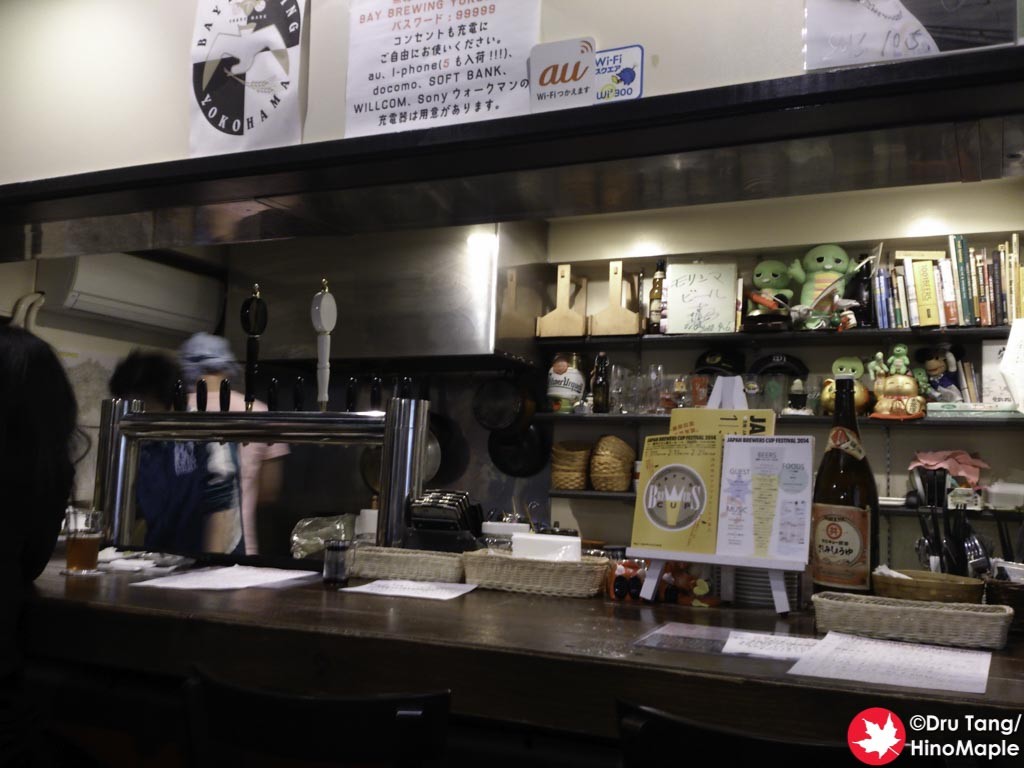 Finding Bay Brewing is a difficult challenge.  They are located at Kannai Station and trying to find your way around the station can be disorienting.  I believe I’m experienced enough in Japan to find my way around but trying to find Bay Brewing was not easy.  Unlike Thrash Zone at Yokohama Station where I couldn’t find them because they were closed, Bay Brewing is located on a small street and they don’t have a lot of signage.  There is a single red awning without anything written on it and a simple sign in the window that wasn’t lit up.  I passed it at least once before I took a closer look inside and at the windows.  The outside appears as if it was just a simple cafe but when you take a deeper look you can see the bar taps and the brewing materials as well.  Once inside you are filled with a sense that it is a bar and a craft beer pub as well.  While the smells are a little standard for any restaurant or pub, the view of the adjacent brewery is great.  I enjoyed being able to see the equipment they used to brew the beer and pondered what was fermenting in one of the large containers.  The pub itself is pretty small with enough seats for about 20 people.  They had a pro wrestling theme throughout the pub but it wasn’t overpowering.  If you weren’t paying attention, you wouldn’t actually notice the pro wrestling theme. 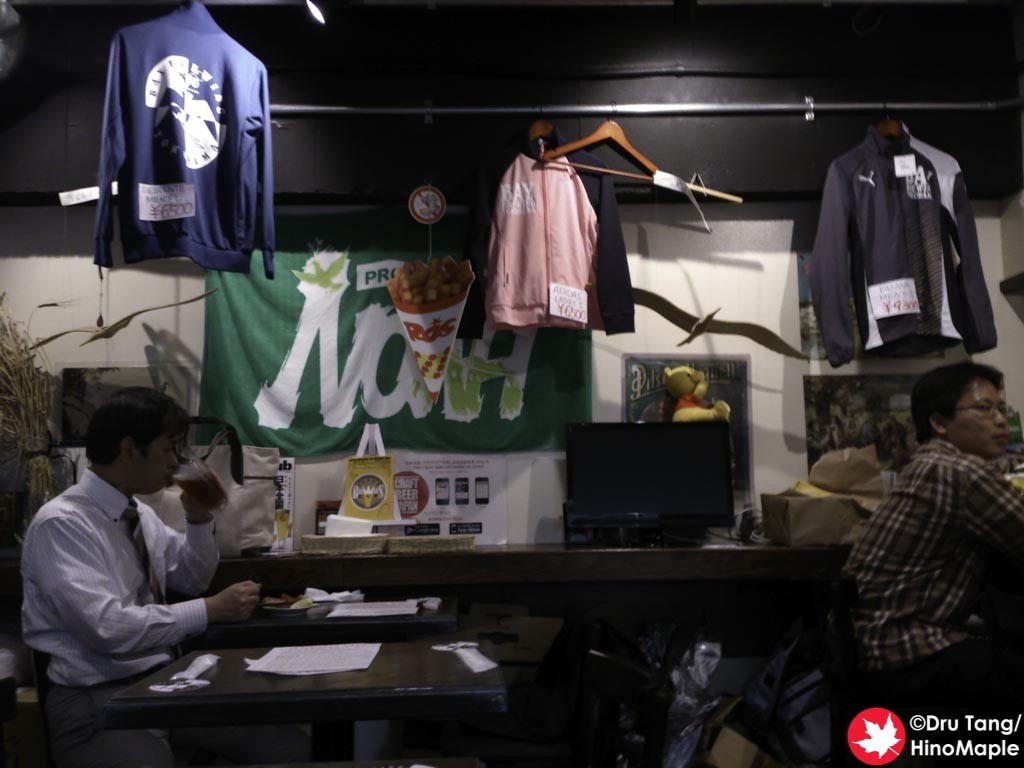 The beer at Bay Brewing was pretty average.  They had a great selection of beers.  They had 6 of their own beers on the day I visited and a guest beer.  The prices are pretty average at 900 yen a pint, although the premium beers are a little more expensive.  I only had the opportunity to have the Simcoe Buster, which is a basic pale ale.  I didn’t find it particularly spectacular but then again after having the “extreme beer” at Thrash Zone, it was difficult to compare the two.  My palate was a little overpowered by the intense flavours of the beer at Thrash Zone, and the alcohol of the beer itself.  Since it was my second bar of the night, I had to eat something.  I ordered a bunch of dishes and this is where Bay Brewing shows their ability to be an all-round place.  I had some onion rings and fried chicken to start.  I was pleasantly surprised by the dipping sauces which were very unconventional.  They used sweet chili sauces rather than the typical ketchup.  I also ordered a huge plate of fresh cut fries  They really cut the potatoes prior to deep frying them and they were really good.  Unfortunately Bay Brewing is still more of a bar than an actual pub as their food options were a little thin, but the quality of the food was pretty good for a bar. 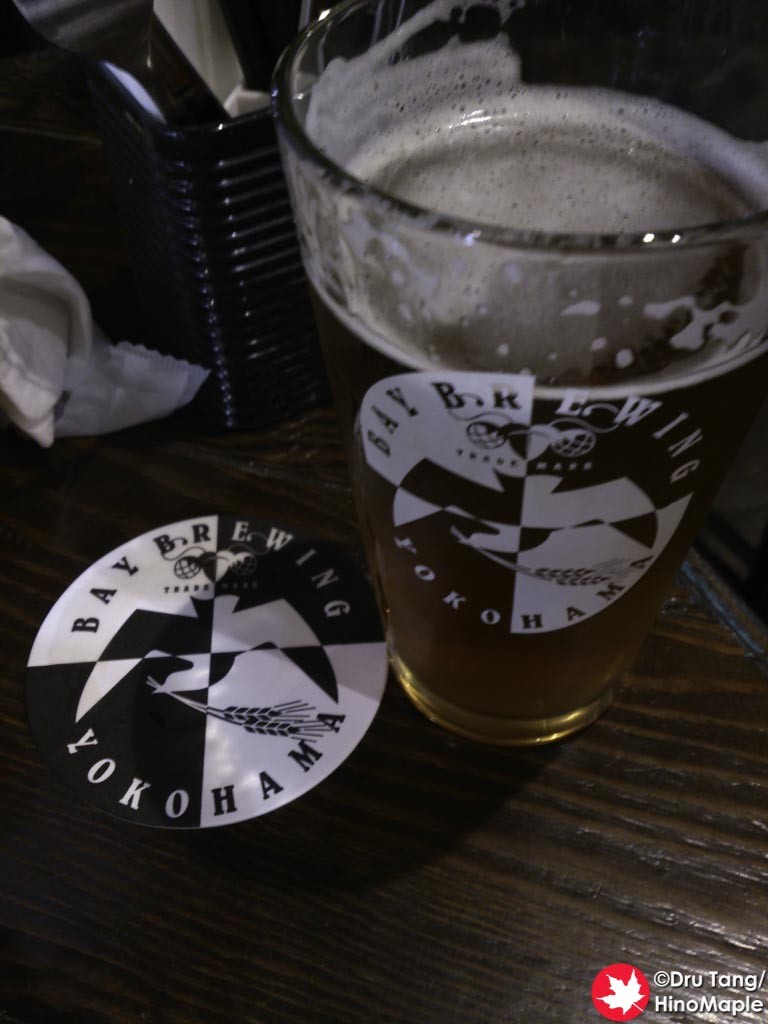 Bay Brewing is a place I’d like to revisit.  I’d like to go there after having a decent meal as the finger foods are not a good replacement for a large burger.  They really play the middle when it comes to their customers.  They provide a clean and bright environment with courteous servers.  The only problem is that they really play the middle, meaning they are very average.  Living in Tokyo means a trip to Yokohama is not a common occasion.  Bay Brewing is good for people who live in the Yokohama area and I would recommend it to people who live there.  For people who live in Tokyo, it is difficult to recommend people to visit Bay Brewing as there are a lot of great places in Tokyo.  While many of the places in Tokyo don’t have the small brew pub atmosphere of Yokohama, the time it takes to get to Yokohama as well as the costs mean spending time in Tokyo is more attractive.  There is a lot of potential in Yokohama but I don’t see them being able to carve out a niche of beer enthusiasts unless they find something more distinctive.  Hopefully they can improve on their image and find something that makes people want to return more readily. 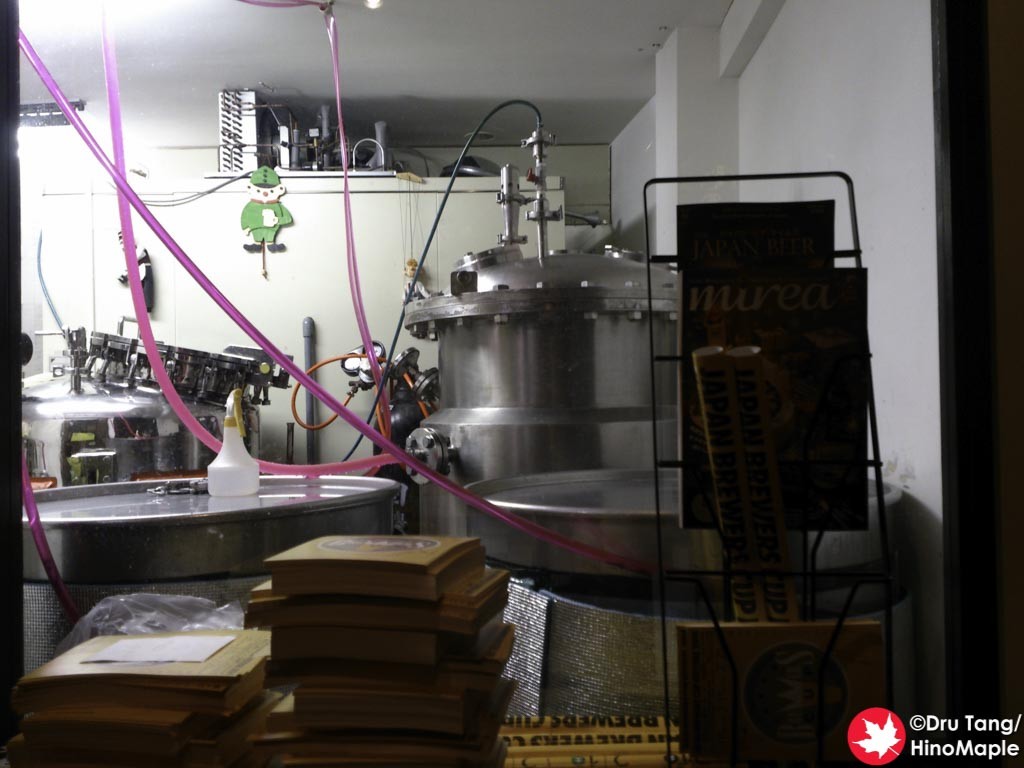