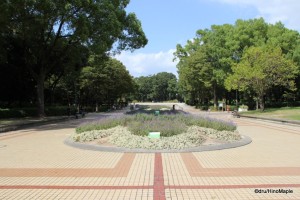 Meijo Park is a large park that is adjacent to Nagoya Castle.  It is quite a large park and it is well used.  I was thankful that I was able to visit the park on a sunny day but it did add a lot of time to my visit to Nagoya.  I think it is a good park and if I lived in the area I would probably visit the park often with Sox.  It is a typical urban park with everything you can think of being crammed into the park.  It is used by many of the locals and it is also used as an event space.  It can take a lot of time to explore every corner of the park and while I did walk through most of the park, I didn’t explore every corner.  There were a few things that I couldn’t get to and the park does change depending on the season.  They have a lot of flowers that bloom at different times so it is necessary to visit at different times to get a full feel of the park, but I doubt I’ll be going back there again anytime soon. 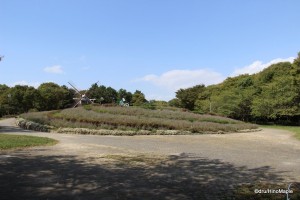 When I visited Meijo Park, I entered from a side entrance as it was closest to the Meijo Station.  The entrance was a side entrance so I was greeted by the lush greenery that a park should have.  I passed by the Flower Plaza on the east side of the park and while it didn’t look uninteresting, it didn’t look interesting enough for me to visit.  I can imagine it would look nice but to be honest, I just didn’t have the time to visit on my half day trip to Nagoya.  The central area of the park is a nice open grass land with a few interesting things.  The first was the Flower Mountain, or Hana no Yama.  It was a circular mound of dirt with a lot of flowers.  When I visited, the lavender was on their last legs and it looked pretty bad but I can imagine it was quite beautiful during the peak season.  While none of the flowers were at their peak during my visit, looking at the official map I can tell they have a lot of flowers around the park and it must be beautiful when in season.  They even have a large wisteria section that spans the entire south side of the park next to Nagoya Castle.  It looks very interesting and if I happen to be in that area during the wisteria season, I just may have to make a special trip to see them. 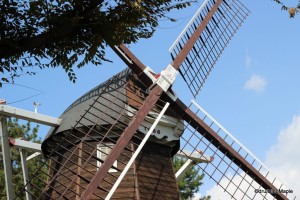 I found the art in Meijo Park to be a surprise.  I was surprised by how many artworks and strange things were in the park.  In the central area there is a large windmill and I had no idea why it was there.  There is probably information in Japanese but I was a little lazy to check the information properly.  The windmill is a focal point for your eyes in an area that is mainly an open grass field.  While it isn’t in the centre of the field it is easily recognizable and quite picturesque.  Also scattered throughout the park are other pieces of modern art.  They are not all great but they are worth a quick look.  I didn’t have a chance to document all of it but I did my best to check as many of them out.  I wasn’t particularly moved by the art but they were worth a look. 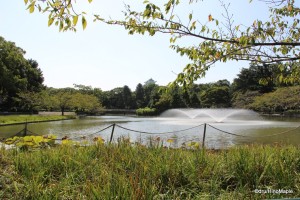 On the west and south sides of the park there is a large pond.  This pond is surprisingly large compared to what I was expecting.  At first, I thought it wouldn’t be very large, but it took a lot longer for me to walk around this pond than I expected.  It is a great location to take photos with Nagoya Castle in the background.  There are some koi, a few turtles, and a couple large fountains in the pond.  While it isn’t the most beautiful pond in Japan I found it to be very tranquil.  It is probably the best place to enjoy a drink on a hot summer’s day but with time running out before I had to leave Nagoya, I didn’t have time to truly enjoy this area of the park. 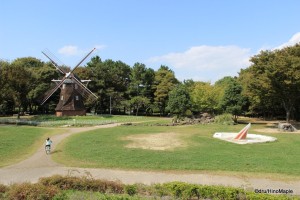 Meijo Park is a park that is often skipped by visitors to Nagoya.  It is next to Nagoya Castle but most people won’t even bother entering the park.  I felt a little strange as it felt more alike a neighbourhood park than a park next to a major tourist attraction.  It did suffer from the lack of visitors at the time because the wisteria weren’t in season and Nagoya Castle’s entrances are not conveniently located to access Meijo Park.  It is a long walk from the castle grounds and most people won’t give Meijo Park a second’s thought but it can be worth it if you enjoy nature and quiet areas of a city.  I think it is a good place to visit if you have the time but I believe most people don’t really know it exists.  If you need a place to relax after visiting the hectic Nagoya Castle you can head over to Meijo Park and just chill out with a snack.  I know I needed it after visiting Nagoya Castle, but since I visited Meijo Park before Nagoya Castle, I ended up running for Nagoya Station to return to Tokyo rather than relaxing at the park.