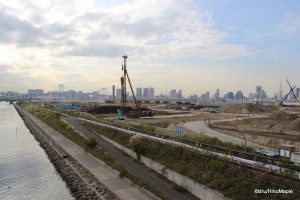 The Tokyo Metropolitan Central Wholesale Market, or almost always referred to as the Tsukiji Fish Market is world famous.  Around 2012, the Tokyo government decided to officially move the wholesale market to a new location in Toyosu.  Technically the area is Shin-Toyosu but the area is pretty devoid of any real activity.  I had a chance to pass through the area and got to see the construction efforts up close.  A lot of the land is currently being dug up with any contaminated soil being moved off site.  A lot of the construction appears to be a cleanup operation rather than a construction operation.  Infrastructure in the area is almost complete but the actual market area is far from complete.  I didn’t see any foundations but from what I could gather, the roads linking the future market to neighbouring areas are almost complete and may even be opened by the end of the year.  I can’t guarantee it but it looks promising.  The entire area has almost nothing there and for any casual tourist, there is absolutely no reason to go there.  For locals, or people who live in Tokyo, there is no reason to visit that area.  For me, it was a good opportunity to visit various future Olympic venues, including the future Olympic Village.  When the wholesale market is complete, it will be between the main Ariake venues and the Olympic Village.  I’m sure a lot of athletes will make the trip over the bridge to check it out when the Olympics are held but until then, the only attraction would be for anyone who wishes to see construction sites.