Harumi is an artificial island that was created out of garbage.  Like most islands in Tokyo Bay, Harumi was once a garbage site until 1929 when the landfill was closed.  It then took nearly 30 years after the close of the landfill before Harumi saw significant change, becoming a site for major exhibitions and events.  After that, it wasn’t until 2001, with the opening of the Harumi Island Triton Square, that Harumi had potential to be more than it was.  Triton Square opened up soon after the start of the Oedo Line but Harumi would remain primarily an industrial area due to its lack of transportation options.  Harumi is situated next to Kachidoki and Tsukushima and is well poised for a lot of development over the next 6-7 years as it has been chosen as a site for the 2020 Olympic Village. 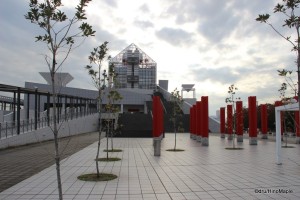 Since I haven’t been able to visit the northern side of Harumi Island, I will focus mainly on the southern side.  The central area is mainly an industrial area.  There isn’t too much to see and once you pass the industrial area, you enter an open lot.  There is absolutely nothing to really see aside from flat tarmac that is almost completely unused.  I would imagine they hold some training exercises for driving cars or riding motorcycles but I can’t see much else happening in this area.  The southern tip of the island is where most of the action is but even that is pretty boring.  The southern tip has Harumifuto Park.  From the west side, it can feel like you are breaking the law as you pass through a green fence that has a permanent opening.  You then walk less than 500 metres to see a park that really shouldn’t be there.  The entire area between the fence and the end of the island is empty until you reach the park.  The park is really nice and it is a great place to relax but it is very small.  You can enjoy the views of Odaiba and Rainbow Bridge from the park or enjoy a nice fountain in the middle of this small strip park.  I enjoyed the tranquility of the park but I would never imagine visiting that park on a normal adventure as it is just too far away to do anything.  Next to the park is the Harumi Passenger Ship Terminal.  It is a basic cruise ship terminal with cruise ships only making short stops, usually on weekends.  The building is very interesting but due to the remote location, it is hard to imagine wanting to visit this cruise ship terminal for any other reason other than to take a cruise. 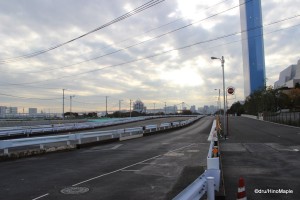 Harumi will definitely be busy over the next 6-7 years in the buildup to the 2020 Olympics.  The Olympic Village will be built on the southern vacant land causing it to look drastically different before the start of the Olympics.  Once the new buildings are finished, there is a strong possibility that the industrial area may be pushed out if land prices start to rise.  The biggest reason this is likely to happen is due to the news that they are currently planning to build an LRT (trams) or BRT (dedicated bus lanes) system that will go to Harumi and potentially to Odaiba.  The plan is currently to build the system from Ginza to Harumi with a future extension to Odaiba or Toyosu.  There are several plans in the works with all of them starting in central Ginza.  The plan would either take up 2 lanes of Harumi-dori where the trams would terminate at the famous Ginza crossing, pass the Kabuki-za, the current fish market, and then head through Kachidoki to Triton Square.  The route may head through the current fish market area itself and since it is closing in a couple years, there won’t be too much trouble in procuring the land.  Many plans call for the terminus to be at the Triton Square with future extensions to the new fish market and potentially all the way to Shiokaze Park which is at the far end of Odaiba.  If they did build the LRT all the way there, it would definitely be a popular mode of transportation.  Building the LRT to Harumi only would mean the transportation link would not be well used.  At the very least they should consider going to the new fish market where people can connect to the Yurikamome Line, but unfortunately a route to the new fish market would probably skip Triton Square, a major centre in Harumi itself. 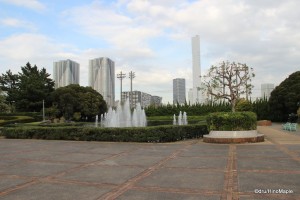 Currently, there isn’t much to see or do in Harumi.  The views of Tokyo Bay are really nice but the fact that it is currently being developed means it will be a boring and relatively inaccessible place for most people.  In order to see most of the island, you have to have a car or a bicycle.  Even for me, cycling from Shitamachi all the way to Harumi is not an easy task.  It is definitely more useful when you have a plan to visit different areas for photos and research but for a regular person I’m sure it would be a waste of time.  Once the Olympic Village is complete, the LRT system is built, and the new fish market is finished, I’m sure it will be an interesting place to visit.  I am already excited to see how it will turn out in the near future once construction of the Olympic Village is complete.