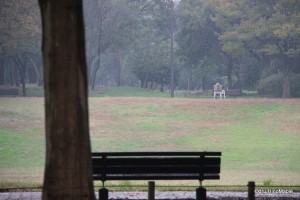 Yumenoshima is literally translated as Dream Island and will host several venues for the 2020 Tokyo Olympics.  It is with this in mind that I took a little time to visit this island.  Dream Island is a funny name to choose for what is essentially a trash island.  From the very beginning, Yumenoshima was proposed as an airstrip until the war started.  Due to a lack of supplies, the island was left alone as a recreation area until the 1950s when the island was scheduled for land fill via trash.  Like many islands in Tokyo Bay, many were created with the trash of Tokyo.  Yumenoshima is no different and by 1967, the landfill was full and closed.  It took another 11 years for the current Yumenoshima to take shape with a large park and a small stadium.  There is also an incinerator keeping to the history of accepting trash on the island. 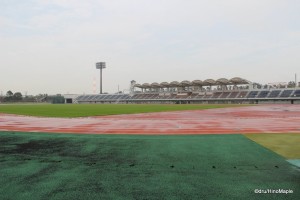 Getting to Yumenoshima is pretty easy, but it isn’t convenient.  Located just north of Shin-Kiba Station, the entire area is pretty big.  It is a little daunting for people looking for a leisure stroll but because it is not in a very popular area, like Yoyogi Park, it isn’t used as much as it could.  I visited on a weekday and it was a nice quiet day in the park.  The western side of the island will not be popular for most people as it is populated with various baseball parks and a stadium.  The Yumenoshima Stadium, or Dream Island Stadium, is an athletics field that can be used by various organizations.  I would imagine it is most popular for schools using it for training.  The stadium itself is pretty simple with some stands on one side and walls around the rest.  I have never heard of any events taking place there but I would imagine the city holds track meets for the students and other events would be held there as well.  The day I visited, I saw many school kids in track suits and I could only imagine they were using the park as a training ground.  The entire stadium is likely to be destroyed and rebuilt by the time the Olympics start as it will hold some equestrian events and the facilities are currently not capable of holding any Olympic events in its current form. 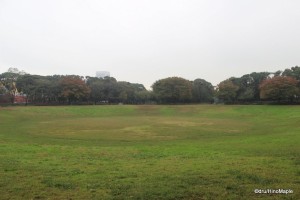 The main area of Yumenoshima has to be the east side.  The main park can be split into two sections.  There is a public track made of asphalt, but aside from running around it in circles, there isn’t much to say about it.  The other side has a large bowl field surrounded by beautiful trees.  The field is shaped like a bowl and as you approach the centre, you head down an incline.  It is an interesting shape but completely useless as a place to play any real sports.  I found it very peaceful in that area of the park with various people walking around that area.  I am afraid that this area will be destroyed to build an archery stadium, but I’m not sure how much space will be needed for the stadium.  The bowl field is the most likely location for this as the area next to the bowl field will be razed and a new sports centre will be built. 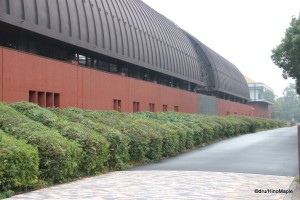 Currently, the eastern edge of the Yumenoshima Park is the BumB Tokyo Sports Bunkakan.  It is a large sports and community centre complex that has everything you can imagine, and then some.  BumB is primarily a sports complex with a couple gyms, a small martial arts ring, and even a basketball court.  You have your typical weightlifting gym and multipurpose rooms but the main surprise for me was the lodgings.  BumB has several rooms from single occupancy rooms to tatami rooms that can hold up to 10 people.  I would assume this is popular for schools that are visiting Tokyo or other international visitors who need relatively cheap accommodations.  If sleeping isn’t important, you can always make use of their office facilities.  The complex has a few meeting rooms where you can hold meetings.  BumB even has its own convenience store as well as restaurant to help you satisfy you after a good workout.  I didn’t get a tour of the building but if I lived in the area, you can be sure I would be making use of the facilities often. 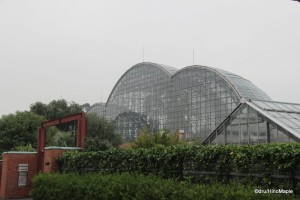 The north side of Yumenoshima is the cultural area of the park.  The northwest corner has a museum dedicated to the Daigo Fukuryu Maru, a ship that met an unfortunate demise.  The Daigo Fukuryu Maru, or Fukuryu from here, was a Japanese fishing vessel that was fishing near the Marshal Islands in 1954.  The US was also conducting a hydrogen bomb test at the same time and the Fukuryu took the brunt of the nuclear fallout.  The crew returned to Japan with acute radiation poisoning with several of them dying within months.  The reason there is a museum dedicated to the Fukuryu in Yumenoshima is because the boat was actually moored at Yumenoshima for a time after the tragedy.  Next to the museum is the Yumenoshima Tropical Greenhouse Dome.  It is a large dome greenhouse that has a few large palm trees and other tropical fauna.  It was a nice looking place but I didn’t have the time to visit that greenhouse.  I ended up heading around to the Tokyo Yumenoshima Marina.  The marina itself is somewhat large but uninteresting.  They have a restaurant called Dimare which stands for Dream Island Marine Restaurant.  The pictures of the food look good but the quality may not match the photos.  I never actually went in as I had some bicycle troubles when I was there and didn’t spend much time checking it out. 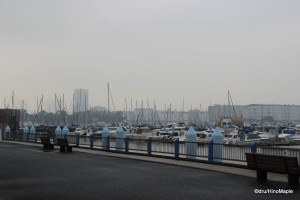 Yumenoshima is a nice little surprise for me.  I didn’t expect it to be as interesting as it was.  I wouldn’t say it is a great place to visit but it is definitely worth checking out if you have seen everything else.  I will definitely return to the park but only to keep documenting the changes as preparations for the Olympics gets underway.  I probably won’t return for a year or so but once construction does get started, you can expect me to be visiting every so often to see what is new.  Keep an eye out as I will definitely be posting a few pictures of the changes if all goes to plan.