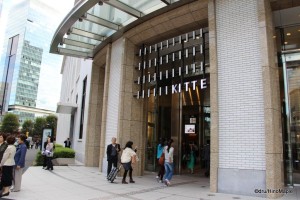 The Main Entrance to KITTE

In March of this year, the new JP Tower was finally completed on the Marunouchi side of Tokyo Station.  It was an iconic building before it was destroyed and rebuilt.  The original building was the old Japan Post Central Post Office and it was pretty old when they demolished it.  They decided to destroy the old building but retain the original facade facing Tokyo Station.  Using a technique where they secured the front of the building and destroyed everything behind it, they were able to save the original façade and clean it up significantly.  Behind the facade they built a large 38 story tower that includes 4 basement floors.  The public area is called KITTE and it involves a 7 floor shopping mall including an outdoor terrace overlooking the Marunouchi side of Tokyo Station.  It opened to much fanfare in March 2013 and I must say that the building does look great.  Many people worried about losing the iconic facade of the original Japan Post building so much that many fought to keep it.  Thankfully the developers realized the importance of keeping the look of the original building and it was saved.  The tower itself is a typical modern tower but the angles facing Tokyo Station are somewhat unique, but they did leave a regular looking building on the other three sides of the building. 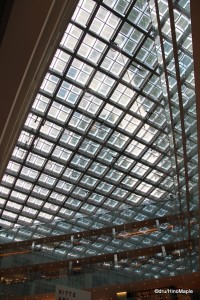 The Main Atrium in KITTE

While Japan Post retains a major stake in the main floor with their post office, the KITTE building is a very interesting shopping mall.  The focal point of the shopping mall is a large atrium that stretches up for 5 floors to allow a lot of sunlight into the complex.  It really opens up the first floor and helps with the design.  I’m sure they’ll try to do many things with it and viewing the atrium from all floors was a lot of fun.  The different angles allow you to see the entire mall from different perspectives.  On the second floor, there is a small museum called the JP TOWER Museum Intermediatheque.  Unfortunately, their website is truly a modern work of art, something akin to seeing a blank canvas with just a dollop of paint on it; confusing and empty.  Thankully Merry Witch and her fun blog, “A Hundred Views of Edo” had the information I needed.  The museum is basically a skeleton museum curated from the Tokyo University.  Various animal skeletons are on display and it is free.  I didn’t know that at first so I didn’t actually go in, but next time I’ll take a look.  The 4th floor provides a little change as you can have free access to the Former Postmaster’s Room.  It is a simple room that retains the original look and feel of the original postmaster’s room.  The wood paneling and a lot of the original look was recreated in this small space.  When I went, it was just a simple gallery showcasing just a few things, but they weren’t so important to me at the time.  The view of the Marunouchi Station building was good though, but for the best views, it is best to head up to the 6th floor.  The 6th floor holds the KITTE Garden, a nice triangular shaped garden that has good views of the surrounding area.  I really enjoyed this garden the most out of the entire building and wouldn’t mind a little rest stop here when things aren’t so busy.  For those who are in need of a little help, you can head down to the basement as there is a tourist and business information centre but when I went it was still a little bare, probably because they put it in the basement and no one really knows it is there. 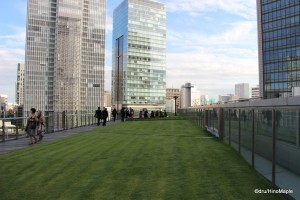 KITTE is a nice little shopping mall with a lot of interesting shops.  I wouldn’t buy anything there as it isn’t my sort of thing, but I would bring people there to just see things.  They tend to mix Japanese traditions with modern themes.  Do be aware that it appears various tour groups make trips to this building. When I visited, there was a tour group heading up the escalators and I was stuck in the midst of a group of old Japanese tourists.  I was a little surprised that they would bring tour groups to this shopping complex but the views are nice enough to warrant a visit.  I wonder tours visit KITTE because it is probably the final stop for all of the Hato Bus tours that depart from Tokyo Station.  The Hato Bus tours depart on the street that is adjacent to the KITTE mall and it would make a nice convenient place to put people and then split.  For KITTE, it does add to the total foot traffic to the shopping mall and I’m sure the merchants enjoy it.  If you do have a chance, do check it out.  If you don’t want to do any shopping, check out the view instead as it is really nice.