Nikoi Island is a private resort with no restaurants.  Everything must be bought, rather eaten, from the kitchen from the resort.  Of course all of the workers are local hires and the food is to die for.  I remember reading a few Trip Advisor comments saying the food was delicious but the portions were too small, but I would assume that most of the people were “American” sized people as I found the portions to be very generous and the rates reasonable for the quality of the food you get.  I enjoyed every meal I had and the menu changes every day, so there is no way I could say what you will get but I can easily tell you what I did eat. 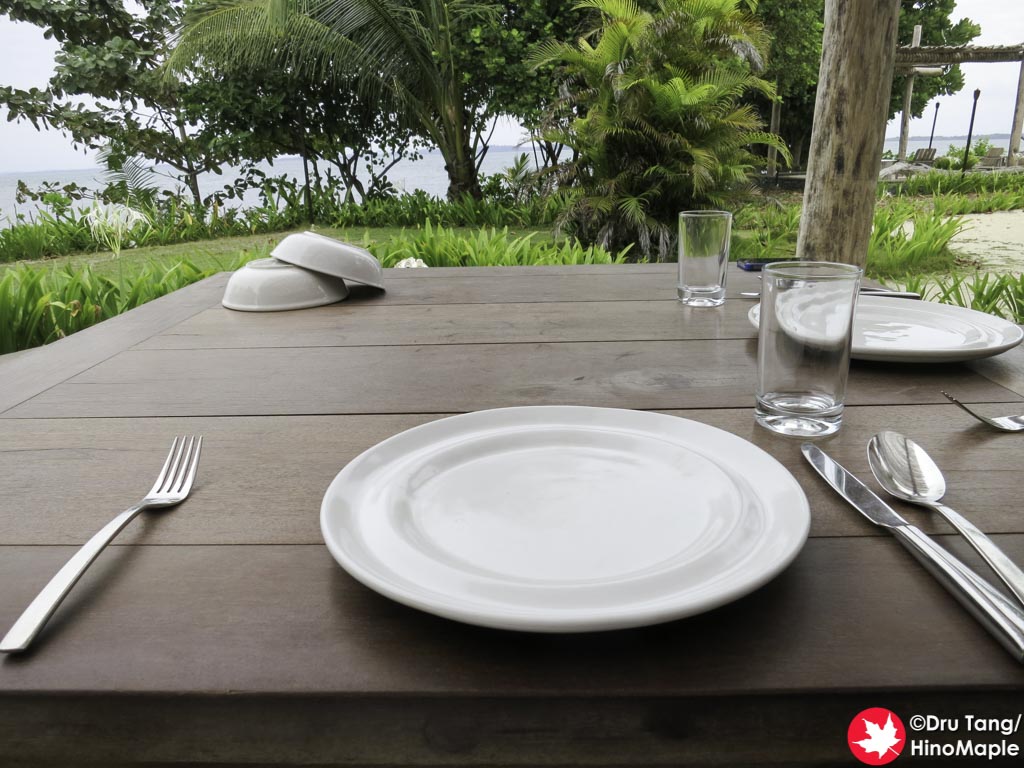 I arrived just after noon on Nikoi Island and had just an hour to put my things away before lunch service ended.  For the first lunch, the meal started with a mixed vegetable salad in what I would say is a vinaigrette sauce.  It was a perfect start as it was a scorching hot day and a light salad is best way to keep cool. 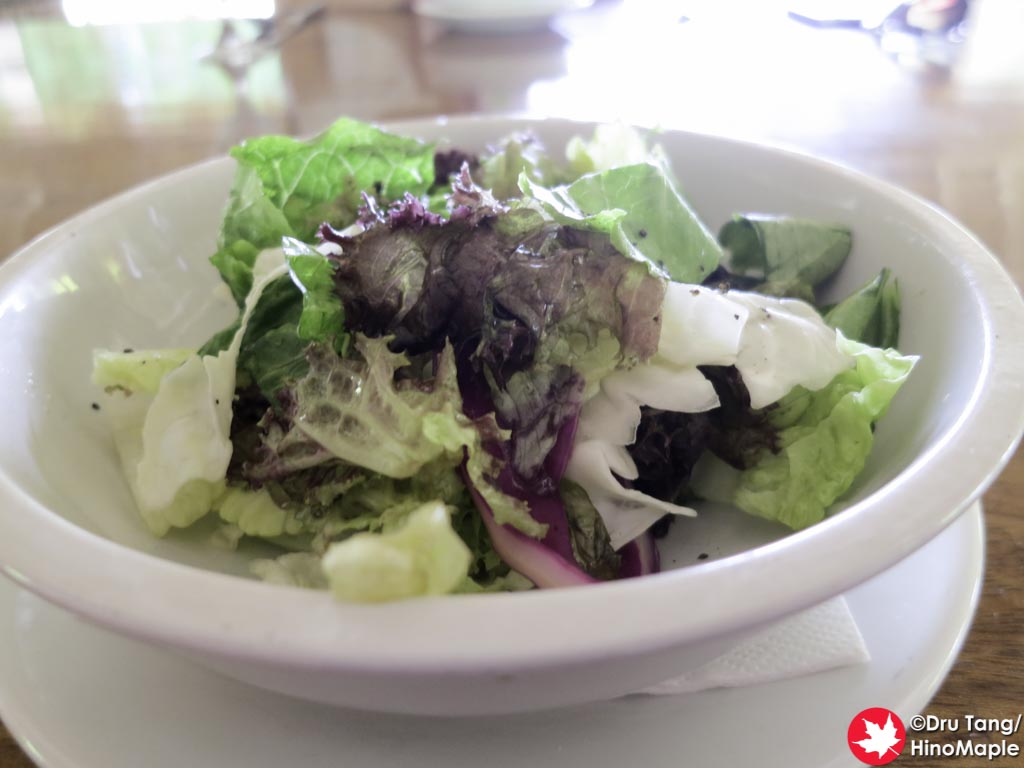 The main course was stir fried seafood, stir fried vegetables, and rice.  I can’t really explain the flavours as it wasn’t spicy but it had a lot of Chinese tones to it. 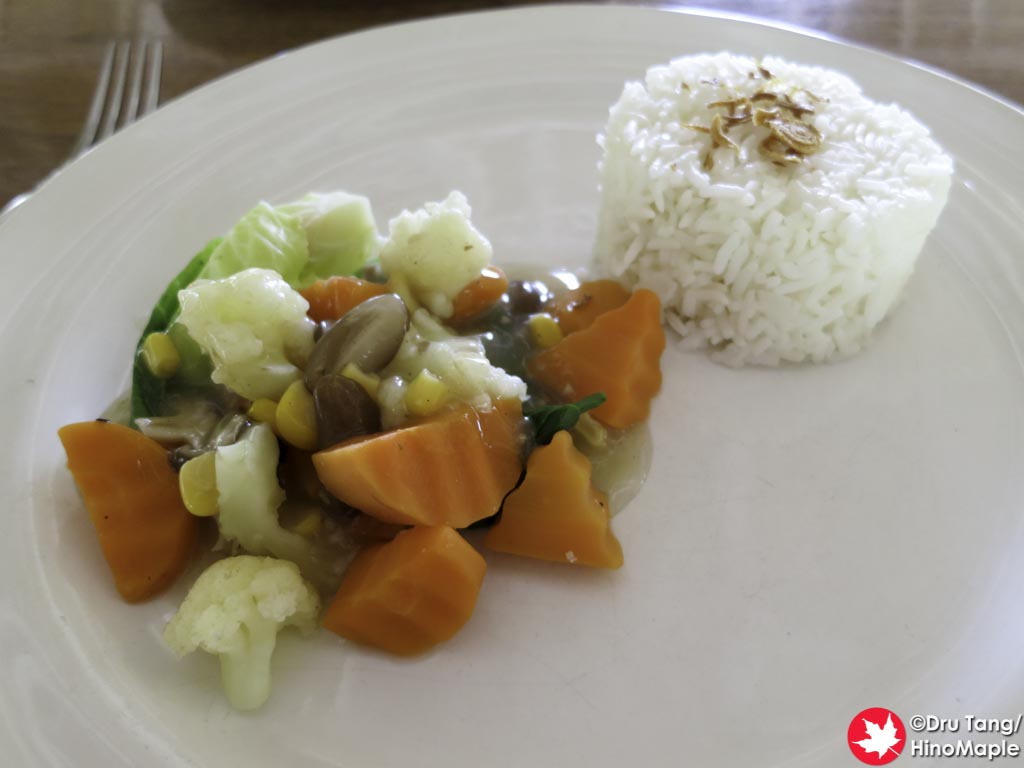 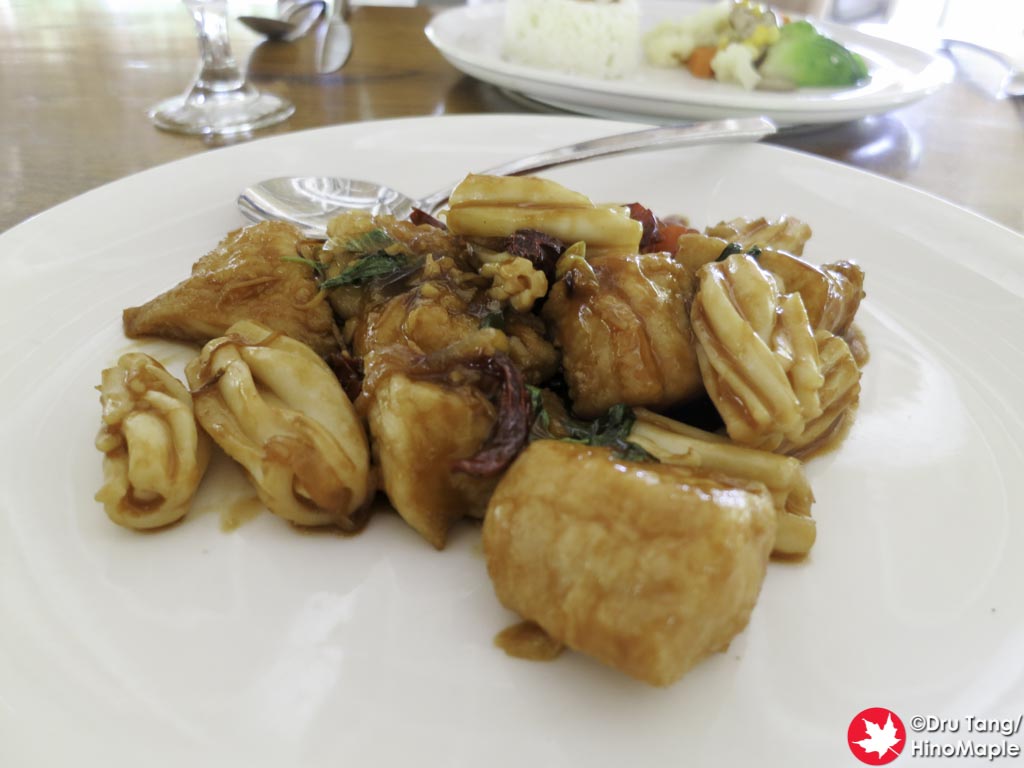 For dessert, we had a bread pudding which was a little too sweet for me, but I’m not a huge fan of bread pudding anyways.  It was delicious nonetheless. 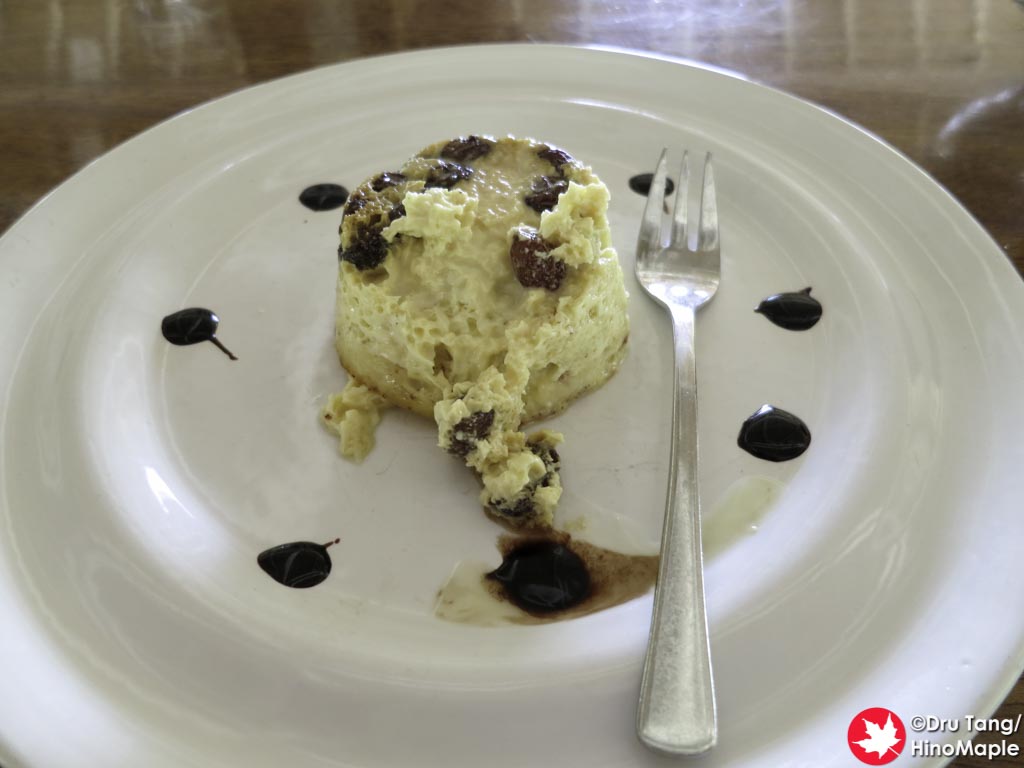 Dinner started off with a Beef Caesar Salad.  There was almost too much beef, if such a thing could be said.  It was a good combination of flavours that may have been a little better had they added a little more salad to the mix.  There was also a side of garlic toast which was pretty typical. 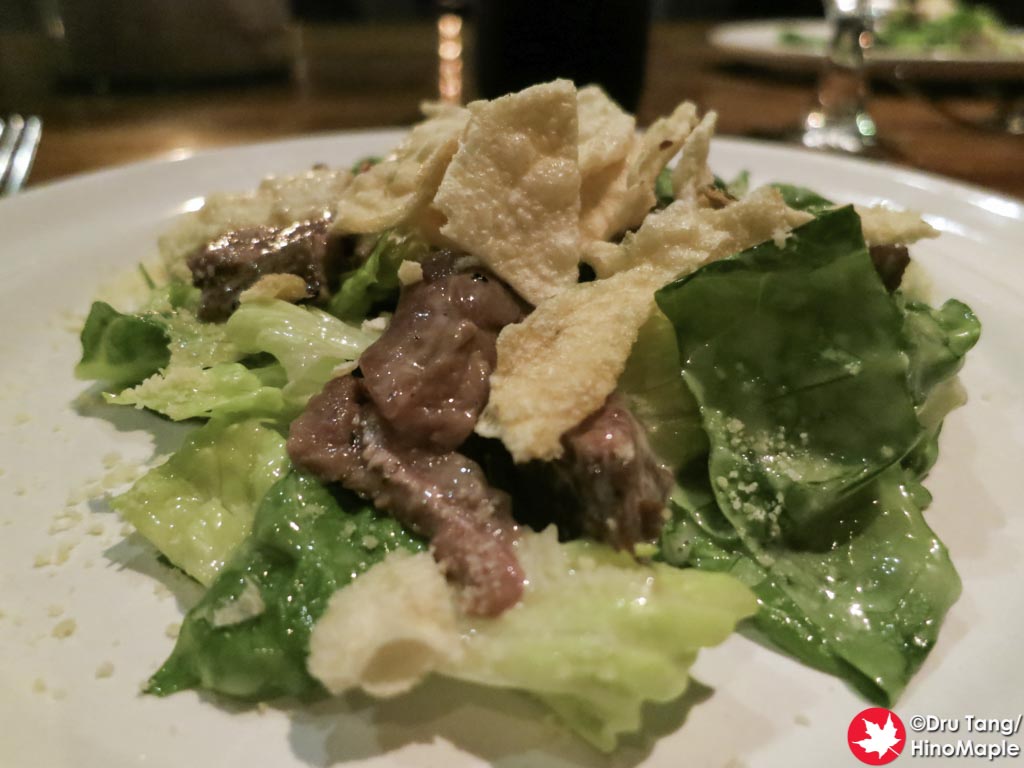 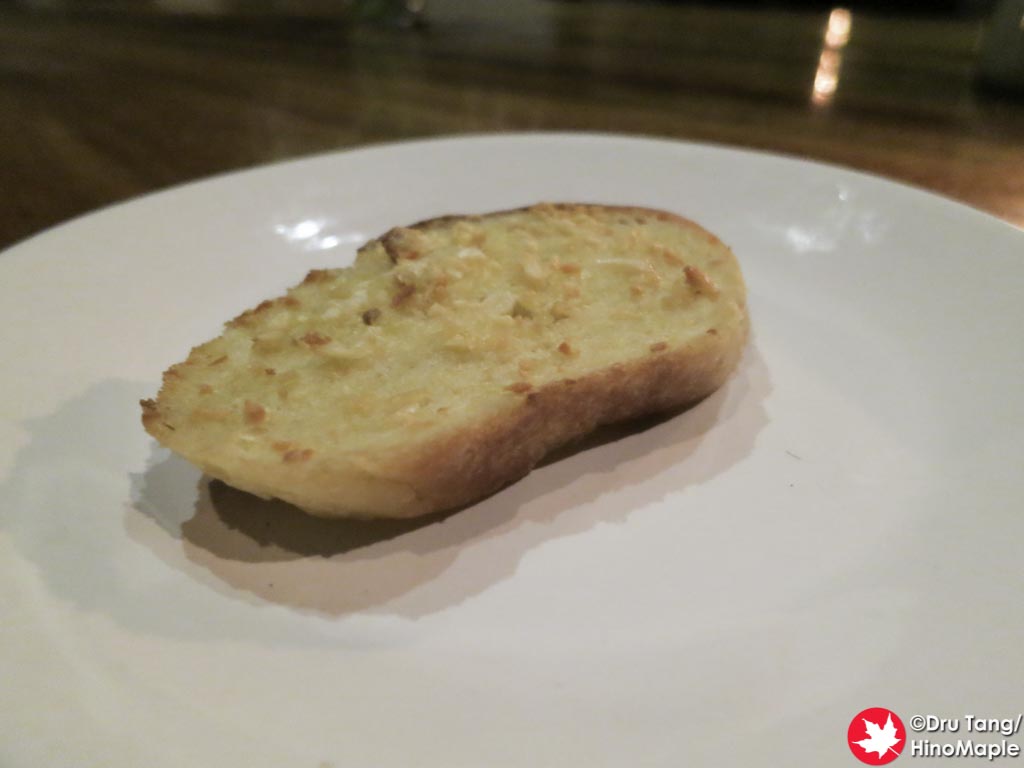 The main course was roast chicken with somewhat of a curry sauce and fried rice.  There were also some deep fried things that reminded me of shrimp chips and some pickled vegetables.  Add to it some chilli and some spicy fish sauce and you have the perfect spicy dish.  For dessert, we were served a chocolate terrine with some pineapple pieces.  The only word I can describe it, and the entire meal, is magnificent. 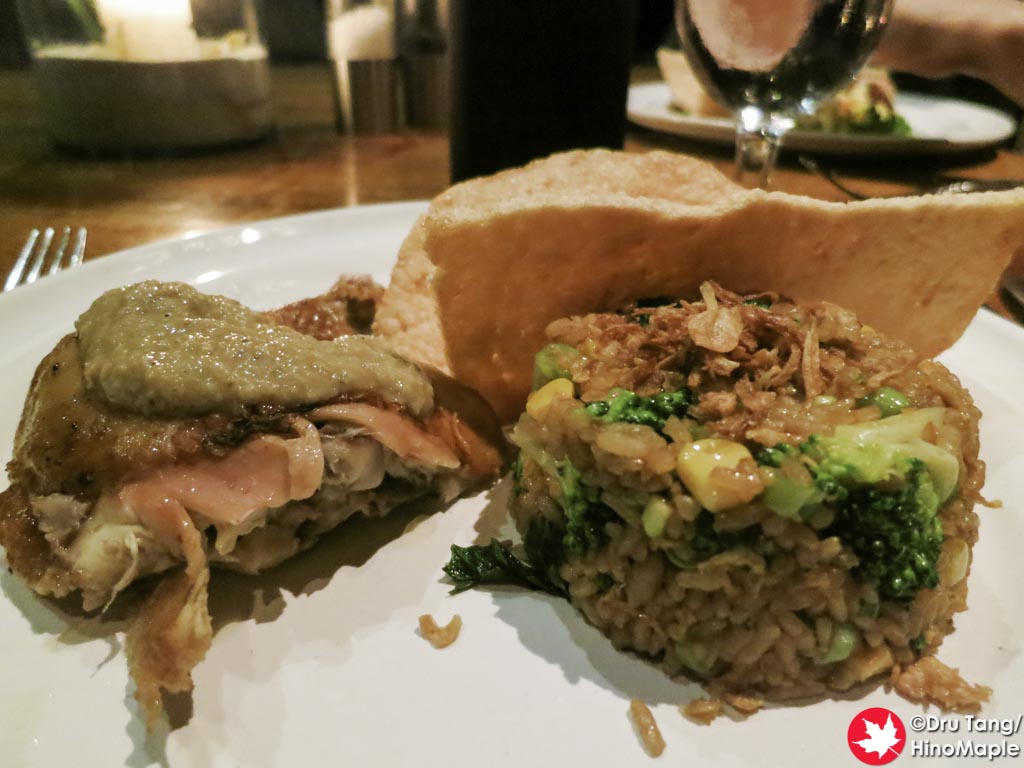 For breakfast, things started out with a plate of fruit, carrot bread, and some watermelon juice.  The fruit available was pineapple, cantaloupe, watermelon, and coconut.  We then had some cereal, coffee and tea, and then the main dish. 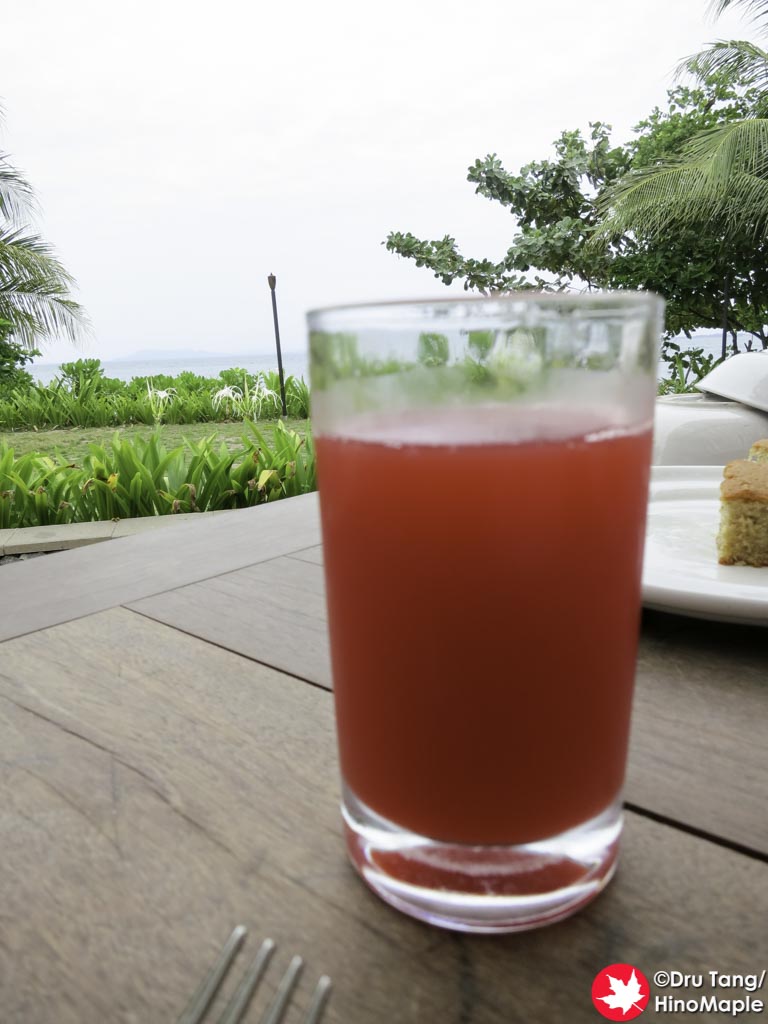 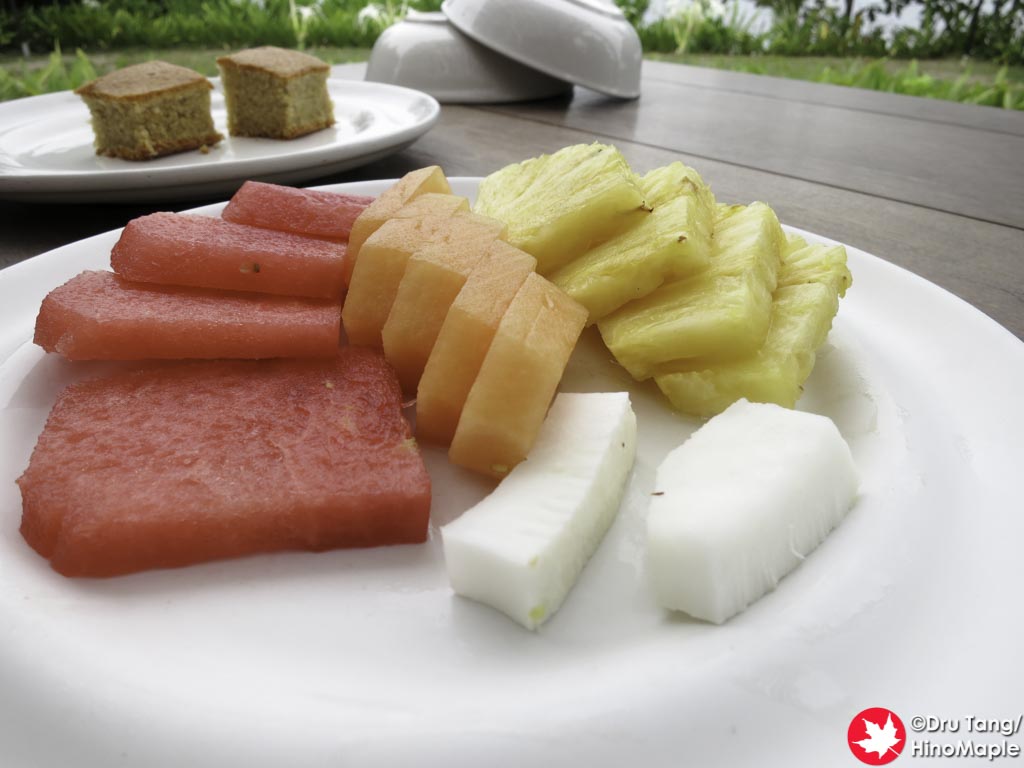 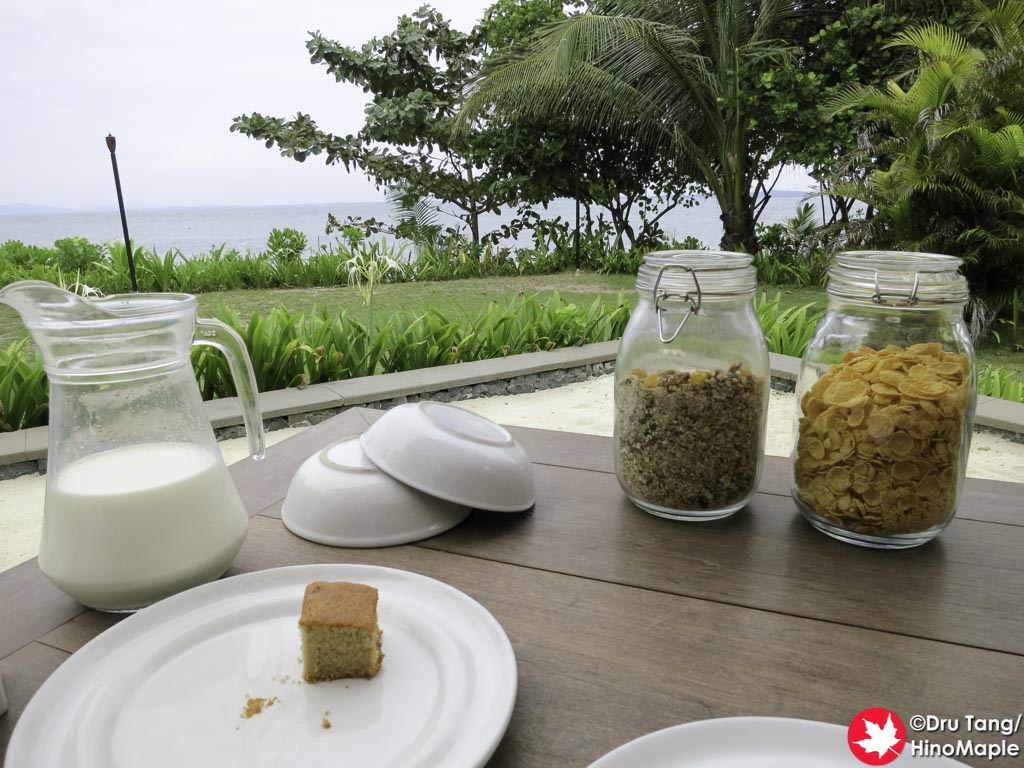 The main dish was a typical American style breakfast.  We had chicken sausage, bacon, toast, and eggs.  There was a choice of scrambled, poached, boiled, over easy eggs and an omelette.  It wasn’t anything special but it was delicious. 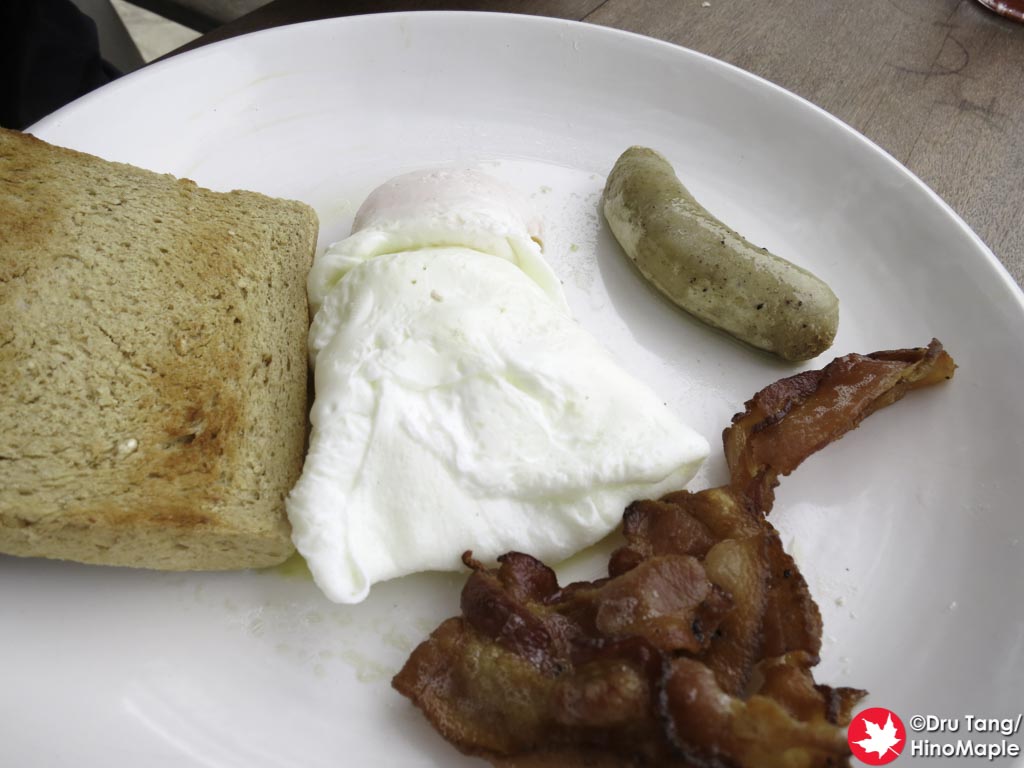 The second meal for lunch was the first meal I had at Nikoi where I didn’t know what I was really eating.  I knew it was safe and I generally knew what the food itself was but I didn’t really know what it was, specifically.  The first course was a fresh rujak, or rojak in Singapore.  It is essentially a fruit salad with a sweet, spicy, and sour dressing.  It had a bit of sesame or peanut taste to it and it was good, although one of the items was pretty sour. 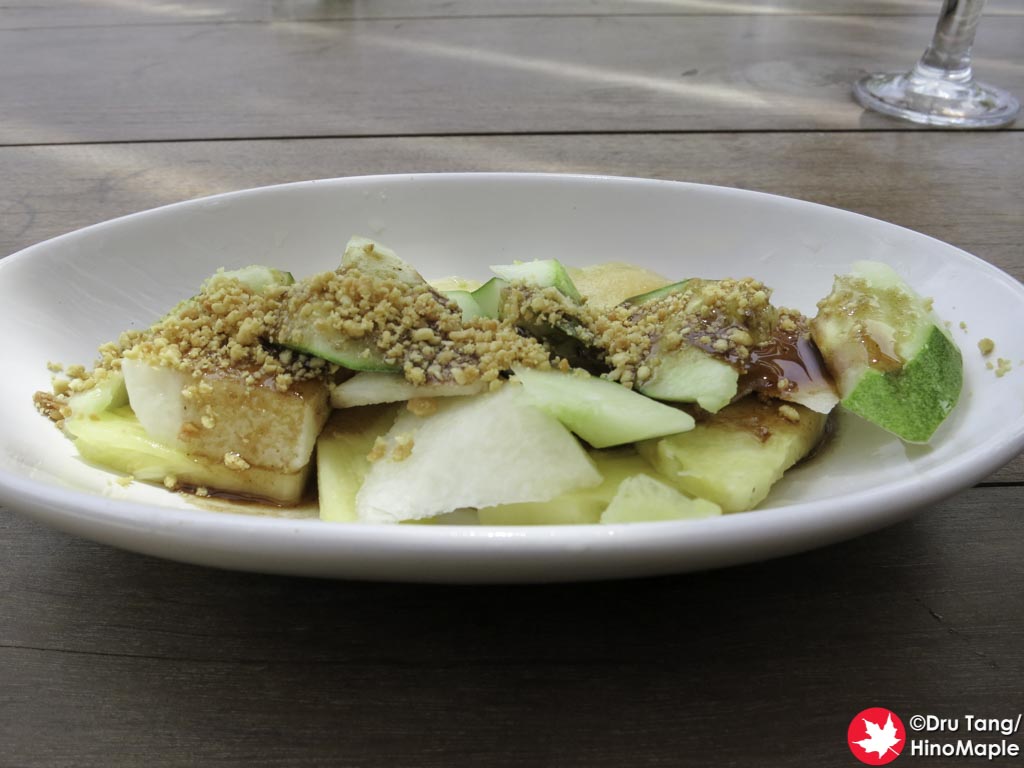 For the main course we had stir fried aubergine which was essentially eggplant in a red sauce.  In fact, I never knew that aubergine means eggplant in British English.  I’m not too sure what was in the sauce.  I felt it was a little salty for my tastes but the fish curry that accompanied it was wonderful.  I enjoyed the flavours and spiciness of the curry and the rice accompanied the curry very well. 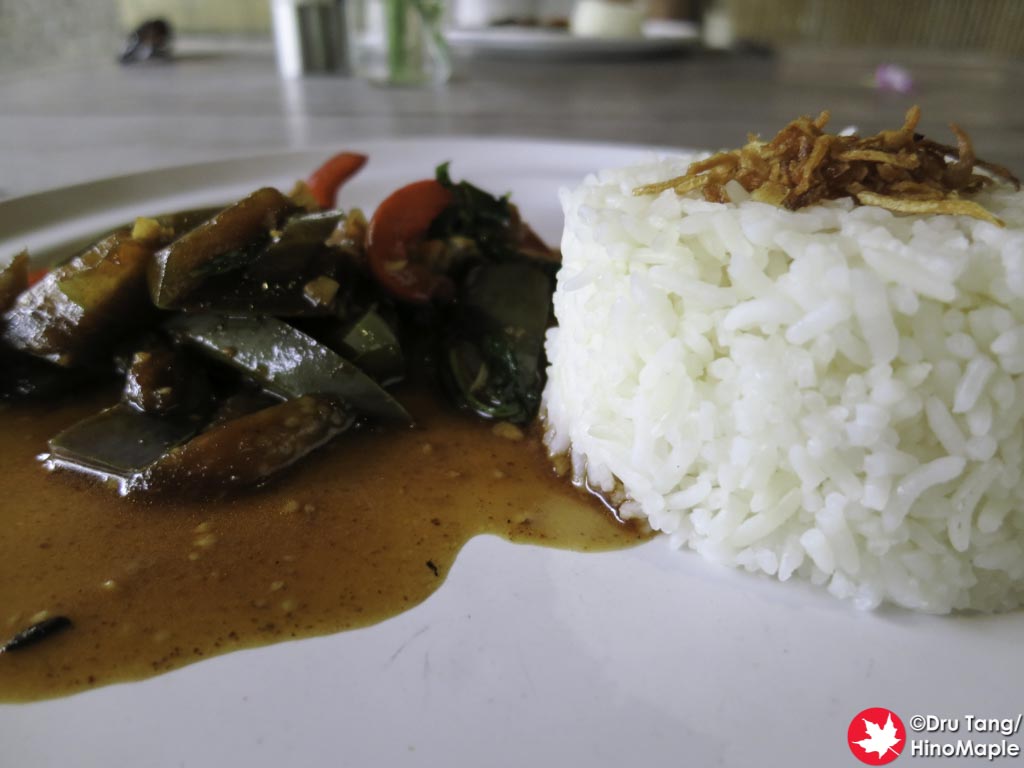 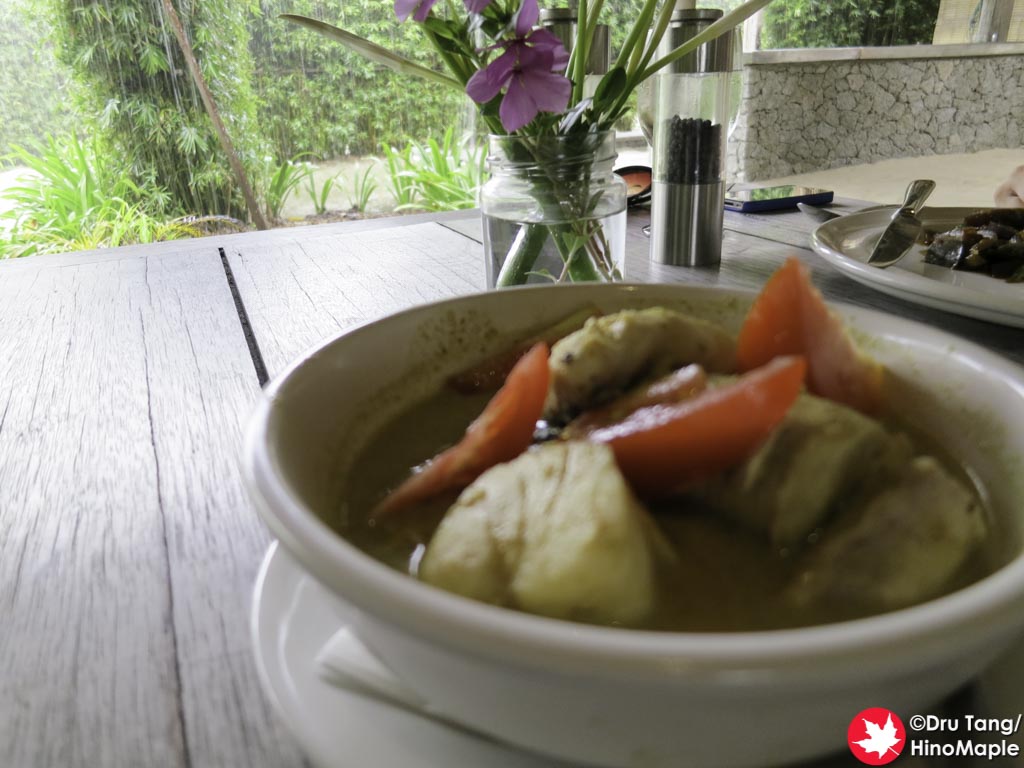 To end the meal, they served an ice cream cake.  Chocolaty goodness that won’t take away from the top chefs in the world, but it far exceeds anything else I could imagine being produced here.  Their chefs are either really well trained, or they can bring in the desserts from Singapore pretty easily. 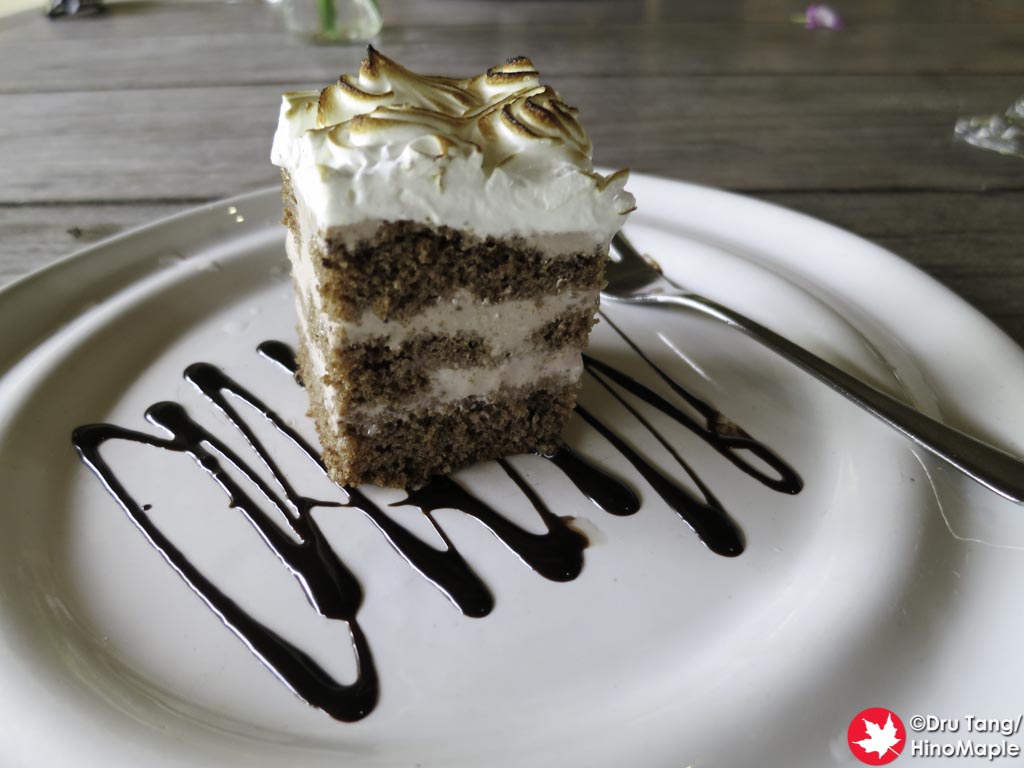 My last dinner on Nikoi was a really interesting meal, at least personally.  It started out with Indonesian vegetables and lumpia with a peanut salad.  The vegetables might have just been something similar to sunny lettuce, or red tip leaf lettuce, in Japan.  The lumpia was great.  A deep fried roll with noodles and chicken in it.  It was very different to the Filipino version I’m used to eating back in Canada. 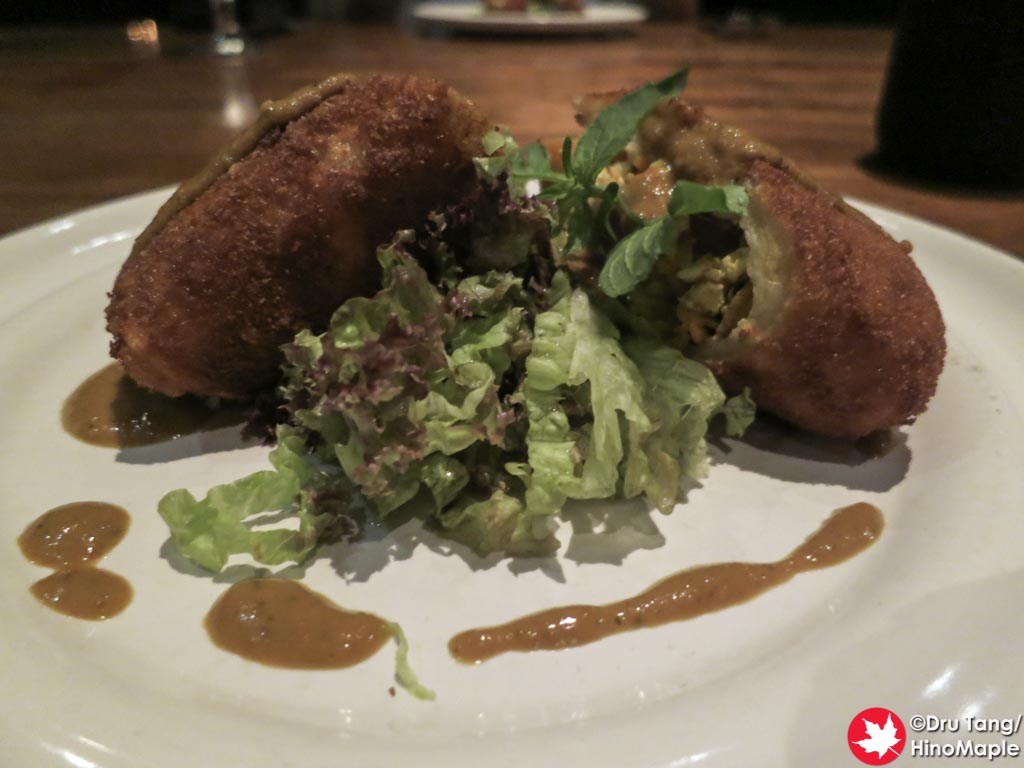 The main course was a stir fried pepper beef along with steamed bok choy, or Chinese cabbage, and ginger rice.  It was a simple meal but really delicious.  This time, the portions didn’t feel overwhelming and I was able to finish my food without feeling overly stuffed as I did on the first night. 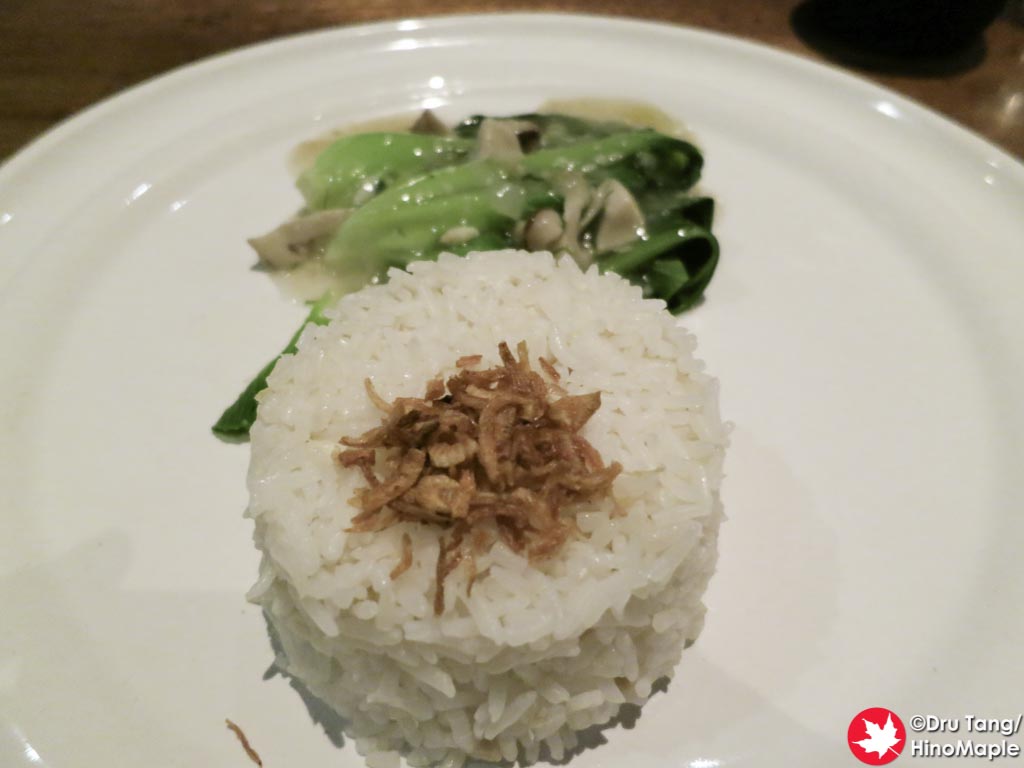 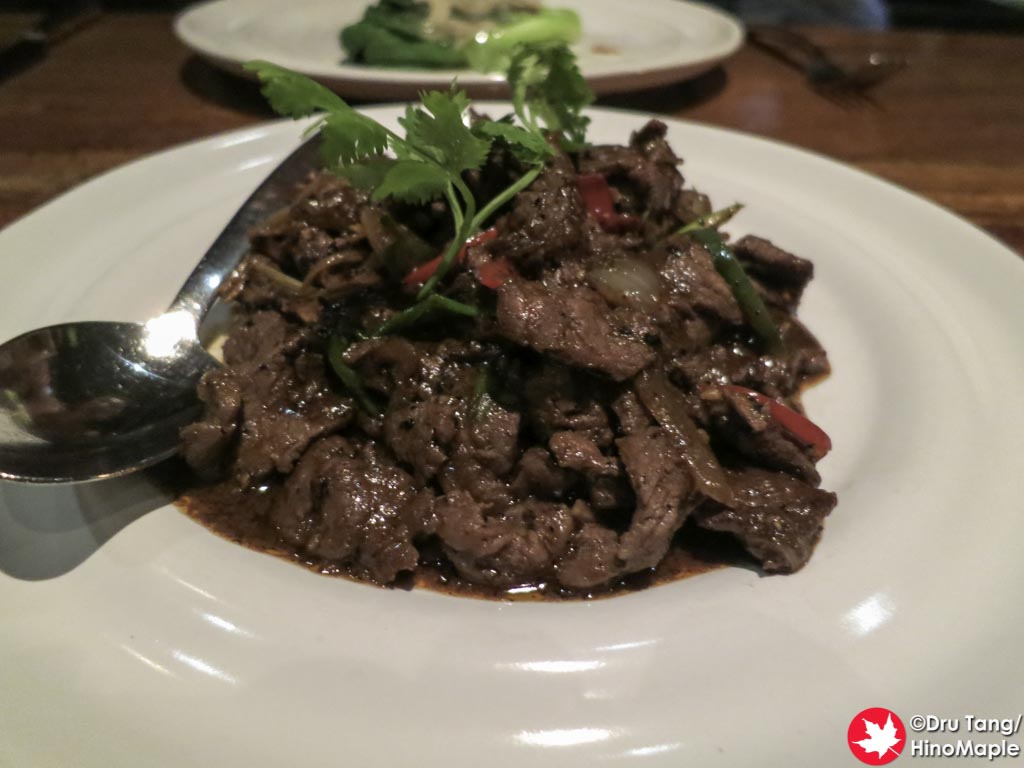 For dessert, we were served a mango cream which was great for a hot humid night.  The mango cream was just cut mangos with a cream sauce on top.  It is hard to describe but I wouldn’t have minded seconds, but this Canuck has had his stomach shrink due to living in Japan for a long time so I didn’t order seconds. 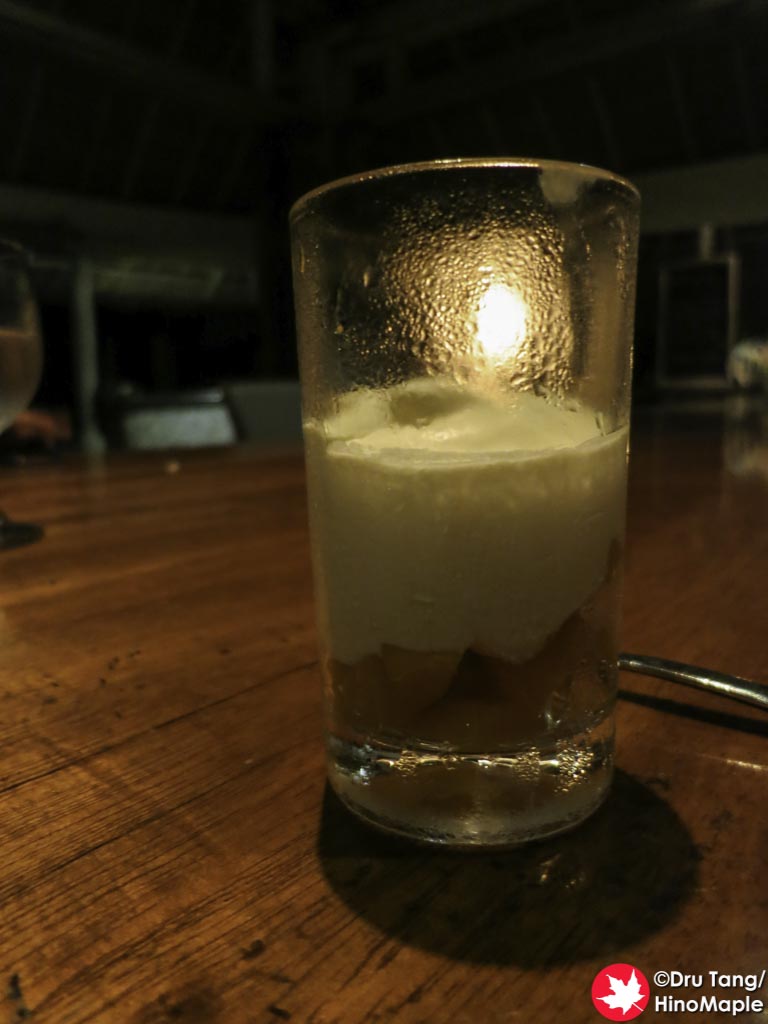 Breakfast on the third day was almost exactly the same as the first breakfast I had on day 2 with a few changes.  I had melon juice instead of watermelon. 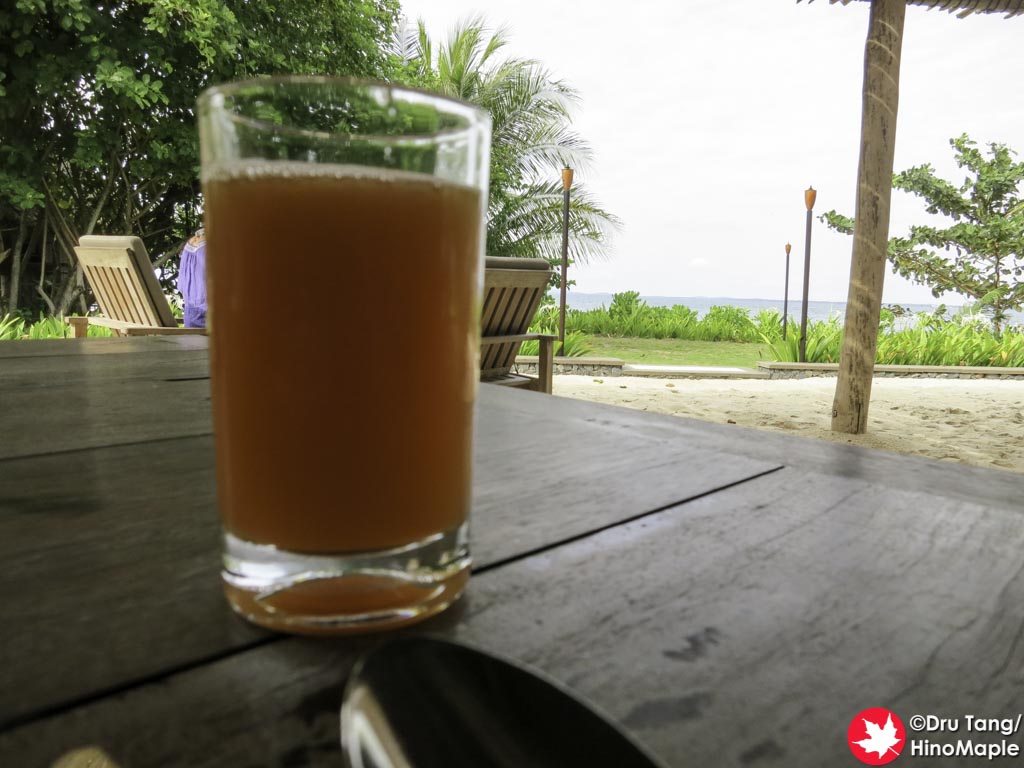 They added mangos to the fruit plate as well as a donut.  For the main dish, I opted for an omelette rather than poached eggs.  Not too much to say about this meal as it was very similar but very filling.  It ended up being more filling than the breakfast I had on the first day. 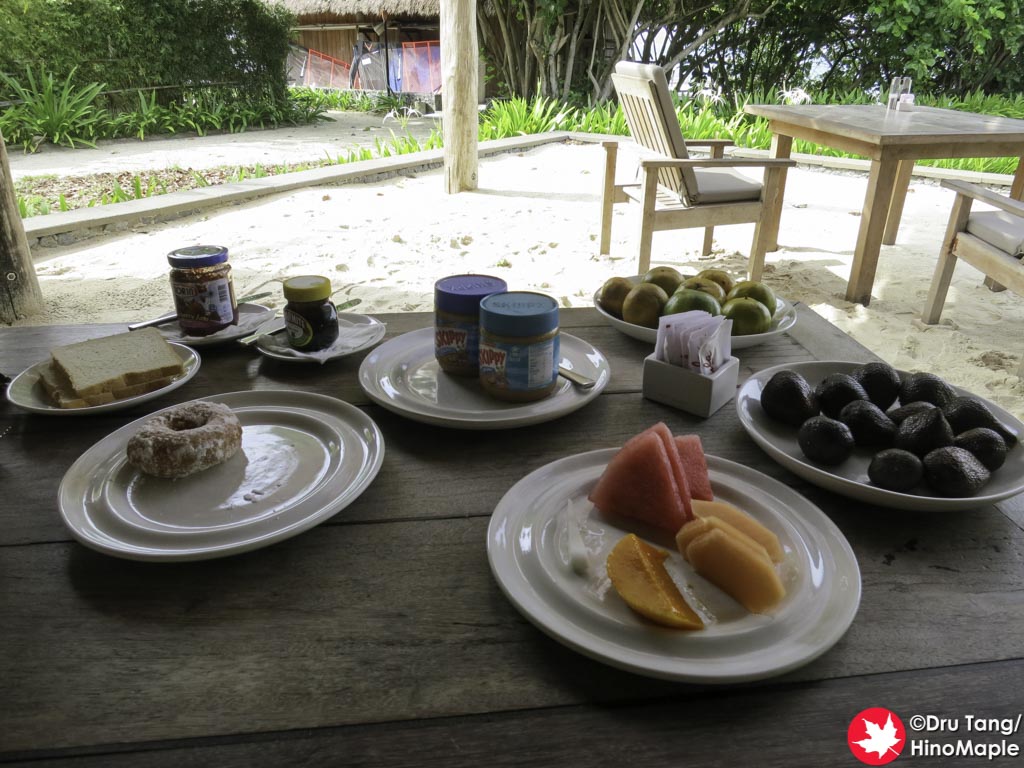 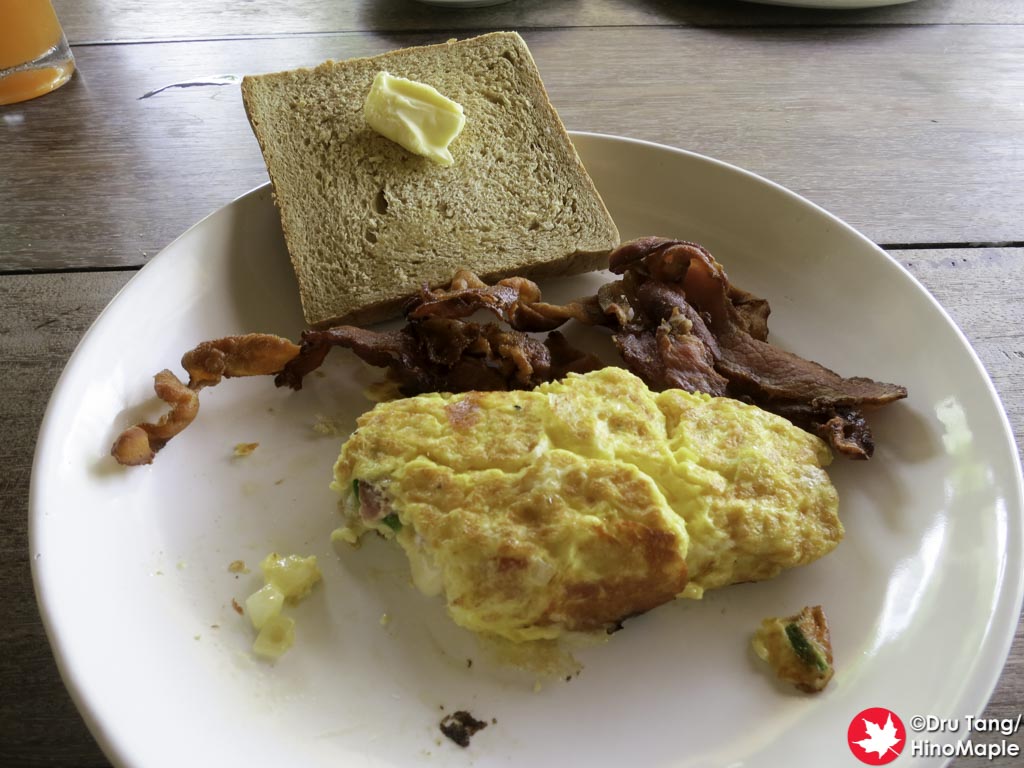 My last meal on Nikoi was an Indonesian King’s Food platter.  It was a huge plate full of Indonesian food.  There was gado gado, a mixed salad with peanut sauce.  Then there was the semur kambing, which was a kind of stewed beef.  We had a sotong curry, potato and tempe sambal, sate ayam (satay), sate pentul and lalapan, but I think lalapan is more to do with calling it a platter than anything else. 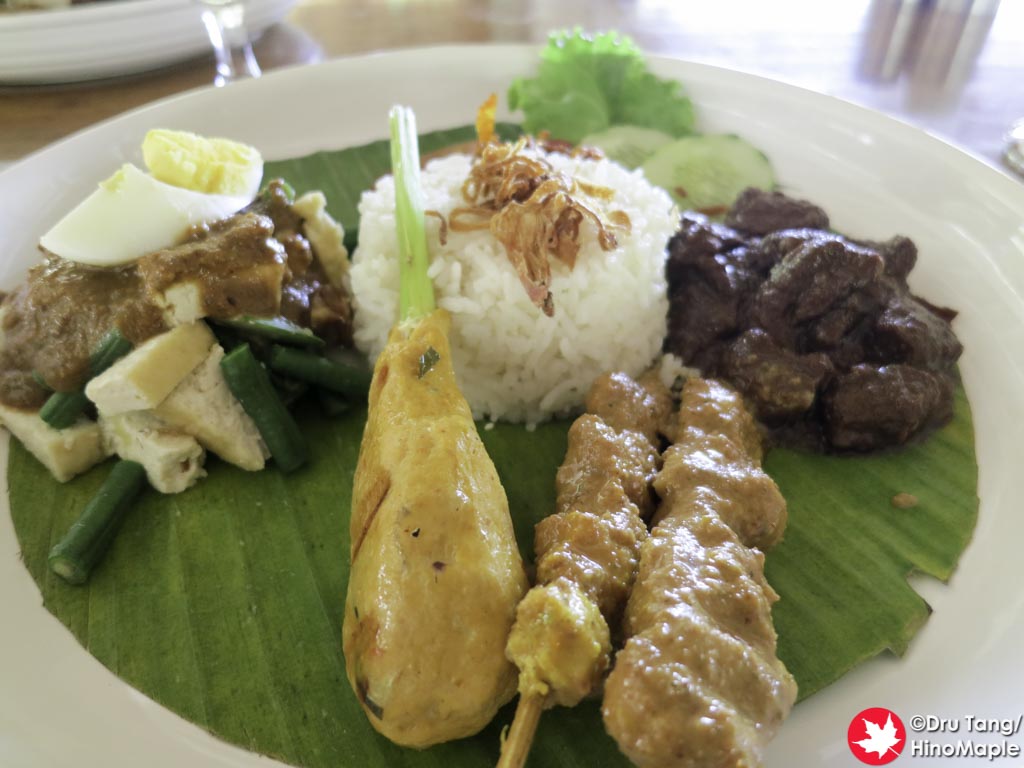 The lunch was really good and the best way to end the trip to Nikoi Island.  I loved eating all of the traditional Indonesian foods that came with my lunch but after a huge breakfast that morning, I was struggling to finish this meal.  I wanted to finish all of it because it was just so good but when you are stuffed, things stop tasting good and you get that feeling that things need to start coming up.  Needless to say, I finished my meal and thankfully I was able to keep it down.  I wish I had it on the first day, but it wasn’t important when I had it, but rather the fact that I did have it. 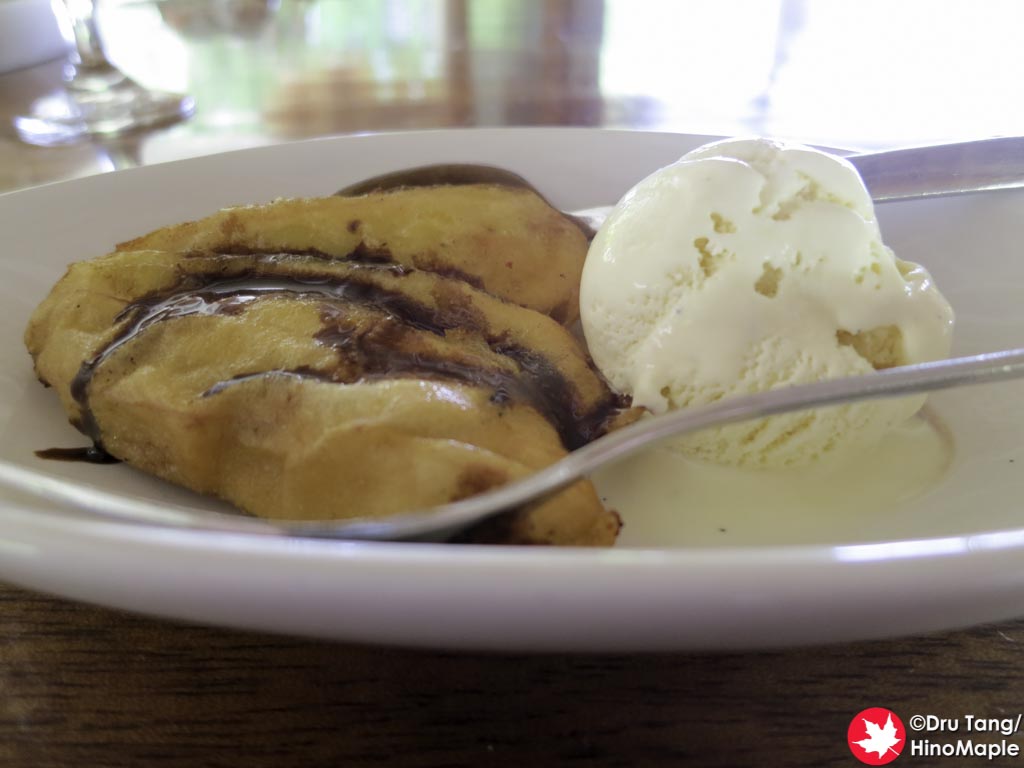 As you can see, all of the food was delicious.  I can’t say more great things about the food.  It was a delight to enjoy the delicious treats they had to offer and wish I had a bigger stomach to enjoy more of it.  I just have to wait until my next trip to Nikoi Island to enjoy it again. 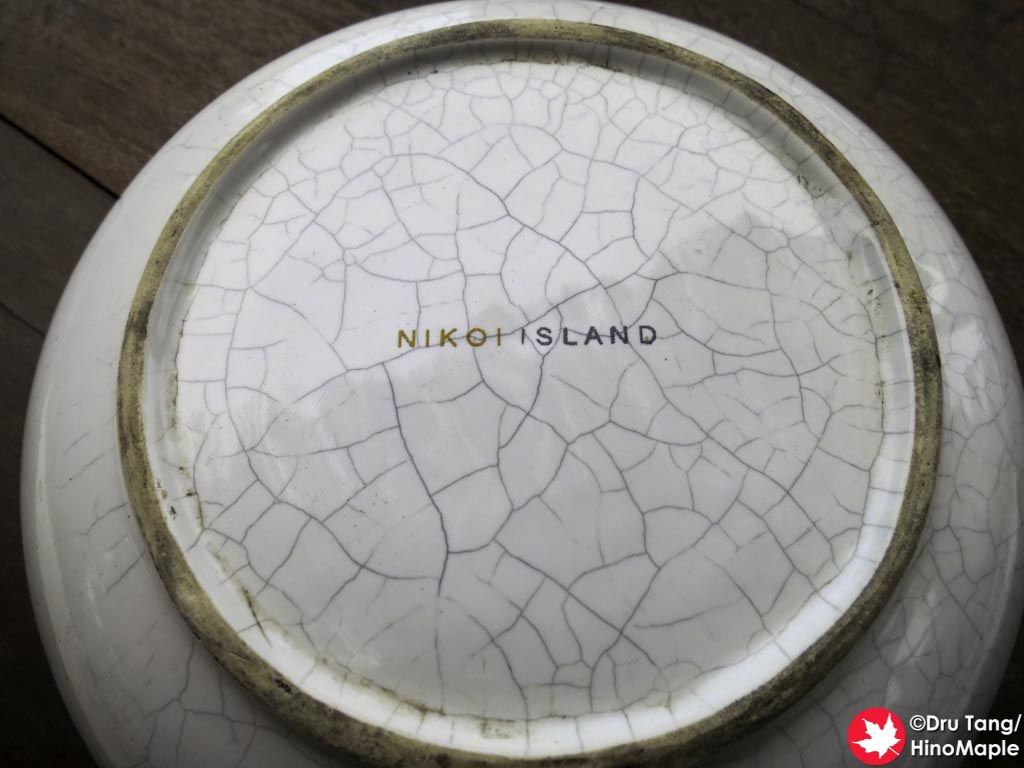