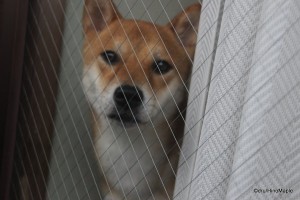 I recently heard a very interesting story.  I was teaching a student and we somehow got into a story about the meaning behind the fundoshi.  Fundoshi is a traditional type of underwear for Japanese men.  You can read about the fundoshi on Wikipedia or somehow rummage through posts from Rurousha’s Blog from around May 2012.  To keep things simple, a fundoshi is basically a long cloth with strings and it is fashioned by tying it around your waist to create underwear.  The story I recently learned was about why men wear fundoshi, specifically for swimming.  Fundoshi can be over 2 metres long, but my student said that they could be up to 5 metres long.  When swimming, it is possible that you will run into a shark in the sea.  When this happens, the fundoshi serves a secondary purpose, decoy.  Men are supposed to let their fundoshies go and the shark will see the fundoshi as a big and delicious fish.  The fundoshi is supposed to look better for the shark and the swimmer can swim back to shore or onto their boat if they are lucky.  They would be missing an important piece of clothing and they’d be naked wherever they found safety, but they’d at least be alive.  I doubt this is a true story, but it is a fun story to share.

PS:  Sorry Ru and Lina, there are no pics of me in a fundoshi, but at least you get a picture of Sox!  😛