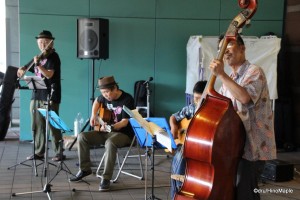 The Sumida Street Jazz Festival started in 2010 and since I moved to Kinshicho, I had never visited this small Jazz Festival.  It started off as a small festival around Kinshicho only in its first year.  Focused mainly on the north side, the festival has grown each and every year.  In its second year, the festival expanded into the Oshiage area next to Tokyo Sky Tree.  At the time, Tokyo Sky Tree was still being built so things were not focused on that area.  In 2012, with Tokyo Sky Tree being open, they started with a few stages and performances around Solamachi.  This year, they did the same but reduced their presence in the Tokyo Sky Tree area.  They focused mainly around Kinshicho and expanded even more around the station.  For a festival that was takes place mostly around the Tobu Levant Hotel and Kinshi Koen, the festival expanded more into the southern area and into Oyokogawa Park as well for 2013.  It was a nice festival and worth a visit if you are in the area. 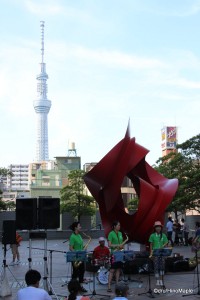 There are several areas to watch the various artists around Kinshicho.  The main area is Kinshi Koen, just a few minutes from Kinshicho Station.  There were 2 main stages and several tents for eating and enjoying the music.  You can even go to the Olinas shopping mall where they had performances just inside the shopping mall.  I spent most of my time just checking out a few acts here and there.  I didn’t get a chance to go into any of the restaurants and pubs where music was being played, but I enjoyed a lot of the music being played around the Tobu Levant Hotel.  The area behind the Arcakit shopping mall is where you can see a bunch of small time bands.  There is a second floor promenade that is famous for the Sumida Triphony Hall.  It often has classical music concerts as well as other concerts.  The entire promenade had 3 different jazz acts playing almost all day.  The one between the Arcakit Shopping Mall and the hotel was probably my favourite spot.  They had a lot of small time acts, almost amateurs, and it was fun to watch them and see Tokyo Sky Tree in the back.  Then there was the small act next to the Triphony Hall entrance.  They had smaller time bands there, but at the same time they looked more established.  Finally, at the west end, on street level, they had a big band setup in front of a coffee shop.  It was fun to see them play and they did a good job with it.  If you have a chance to go next year, do try to check it out.  It is free and you’ll see several talented people there.