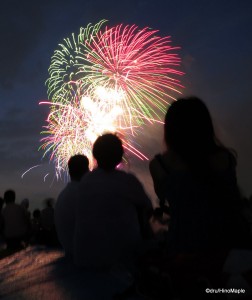 It’s that time of year where fireworks festivals happen every weekend.  As per usual, I went to only 2 fireworks events this year.  I started off with the Sumidagawa Fireworks Festival which unfortunately was rained out.  It started off nicely with me, the Saviour, and Sox heading to our favourite park to watch the fireworks.  As we sat down to drink and eat, a few minutes after the start of the fireworks, we had to abandon our plans as a heavy down pour was approaching Tokyo.  It was starting to lightly rain with a strong cold wind when I decided to do a quick weather check on my phone.  I saw a huge downpour heading towards us within minutes, which is when a lot of thunder and lightning decided to come along with the fireworks.  It was at that time that we decided to run home, so the Saviour and Sox ran home as I ran home with all of our stuff, including a couple cans of beer and food.  We were sitting for all of 10 minutes when we decided to leave and as we returned home, the show was cancelled.  The show lasted for only 25 minutes and it was the first time I can ever remember the fireworks ever being cancelled. 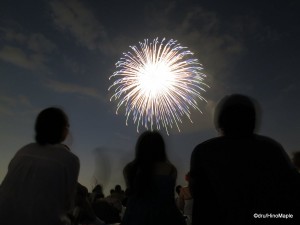 The week after I went to the Sumidagawa Fireworks, I went to the Edogawa Fireworks Festival.  It is actually combined with the Ichigawa Fireworks Festival on the opposite side of the Edogawa River.  I have been going to these fireworks for the last 3 years and it was fun as always.  A friend of mine organized everything and along with other friends who helped out; they were able to get a HUGE area reserved near the front of the main field.  They reserved an area large enough for 300 people!  My guess is that about only 200 people attended, but that is still a large number of people.  It was a great event and I was able to see a lot of old friends whom I hadn’t seen in over a year.  It was hard to see everyone as there were just too many people.  If you want to see the result of the fireworks, I have photos and videos on both Facebook and Google+, but note that they are the same photos, but Google+ has higher resolutions.  You can also see the videos of the Edogawa Fireworks and the other fireworks I saw this year on YouTube.  The links are below.

The fireworks season isn’t over yet.  This weekend, tomorrow, the Tokyo Bay Fireworks will be held.  The week after is the Meiji Jingu Fireworks that are held around the National Stadium and the surrounding stadiums.  There are also other fireworks around Tokyo, but within central Tokyo, there are only 2 weeks left to enjoy the fireworks.

2013 Tokyo Fireworks is part of a series on fireworks in Tokyo.  To read more and learn all about the different festivals, read the older blog posts below:

Information (Some links are for 2013 only)