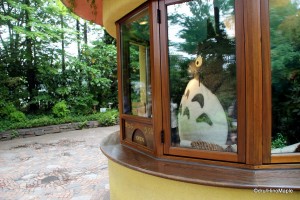 Totoro at the Ghibli Museum

Studio Ghibli is one of the most famous animation houses in Japan.  Founded in 1985, the most prominent figure in the studio has to be Hayao Miyazaki.  Most people associate Studio Ghibli with his work as his works tend to be the most popular among both Japanese people and the foreign market.  Studio Ghibli has been so famous and popular that they decided to open a museum dedicated to their works.  This museum was opened in 2001 and designed by Hayao Miyazaki himself.  Located in western Tokyo, it is a destination that many anime lovers have to visit.  The entire experience of heading out to western Tokyo and then visiting the museum itself is an adventure that cannot easily be forgotten. 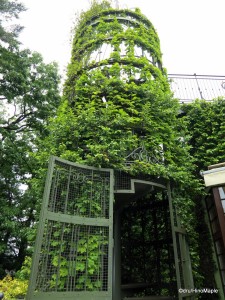 Mysterious Staircase to the Roof

The first step to going to the Ghibli Museum is to purchase tickets.  Unfortunately, due to the popularity of the museum, you cannot just show up and expect to get tickets.  You may be very lucky to get tickets on the same day, but you probably have better luck winning the lottery.  The only way to get tickets in Japan is to go to a Lawson convenience store.  If you need to get tickets in your home country, you can also purchase them through authorized travel agents.  Lawson has their own website with English instructions on how to buy tickets that is a must read if you cannot buy tickets on your own.  It is very simple as all you have to do is find the red Loppi machine; order the tickets based on the day and time; grab the printout; and then pay at the register.  If you have trouble, just ask one of the staff at Lawson.  After you purchase your tickets, take the printout of the tickets to the museum where they will give you your admission ticket.  It is pretty simple, but for non-Japanese speakers, it can be a little scary at first.  After you buy tickets, you have to make your way out to Mitaka on the date you chose and then walk over to the museum itself. 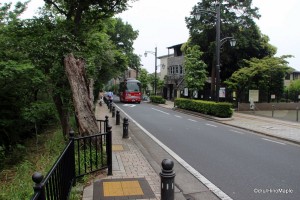 Road from Mitaka Station to the Ghibli Museum

The walk to the museum is not an easy one for some people, but it is a delightful walk.  There is a cute Ghibli Museum bus that departs from Mitaka Station and heads all the way to the museum if you are lazy.  There are special ticket machines that help you buy tickets but the bus can be a little crowded around the opening times and the walk to the museum itself is not bad.  The walk follows a tree lined canal in the middle of the town.  It is very peaceful and you will see various signs telling how far you have to go.  The distance from Mitaka Station to the museum was over 1 km.  While it isn’t a terrible walk, it was harder for me to return to Mitaka Station as I was starving at that point.  As you get closer and closer to the museum itself, things start to look more Ghibliesque.  You will see more of Hayao Miyazaki’s influence on the surrounding stores as they try to take advantage of the museum’s popularity.  Once you do reach the museum, you are more than likely to not be at the main entrance.  Most people will walk in and see a giant Totoro at a ticket booth.  Most people will take photos of it before heading to the museum and there is a staff member on hand to direct you to the official entrance.  The museum entrance is not too far and the line to get in is usually not too long.  They will check your ticket a couple times before you proceed to the “cashier” where you can exchange the printed tickets you received from Lawson into the real tickets.  The real tickets are awesome as you actually get a piece of film from one of the Ghibli films.  Unfortunately you cannot choose which section of film you get and often you will not get a really nice looking piece of film. 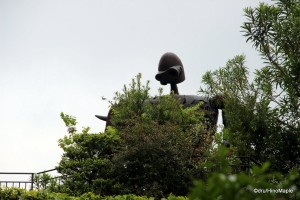 Robot on the Roof

Upon entering the museum, you are invited to “become lost children together”.  The idea is that you should become childlike in your imagination and explore the entire museum without any real plan.  While this sounds great, it can be unrealistic when it comes to doing things efficiently.  I usually take a top down approach and many people will do a bottom up approach.  The entire museum can be separated into 2 sides over 3 floors.  Each floor has 2 exhibits located on either side of a large cavernous room.  The cavernous room expands from the bottom to the top of the museum with a lot to see and do everywhere.  Unfortunately photos were not allowed in the main museum area so my description is very hard to imagine.  Most of the exhibits are temporary but there are a few interesting permanent exhibits.  As you enter the museum, to the right is the first main exhibit.  It showcases some of the technology used in making the movies but it is mainly a way to promote a type of live animation that is like a flip book.  Lights flash as images rotate creating an animated object in front of your eyes.  It is wonderful to look at but be sure to avoid it when it is busy.  The other permanent “exhibits” are a theatre that shows short films only available at the Ghibli Museum, a toy room for kids, and a souvenir shop.  Timing is the most important aspect of the Ghibli Museum.  When I arrived, it was bustling with activity and I made a b-line for a small spiral staircase that lead from the basement to the top floor.  I made sure to wind my way down on each floor being sure to catch everything that I could.  The only thing I missed was the theatre as I just didn’t have enough time to enjoy it.  By the time I did return to the basement, the permanent exhibit was half empty compared to when I arrived when there was a line to get in! 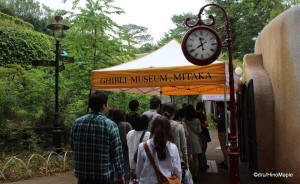 While the main exhibits are located inside, there is a lot to see and do outside as well.  When you enter the roof area, there is a wonderful staircase to the top of the roof and a few interesting characters there as well.  One was similar to a robot, but I’m not sure if it was a real character in an animation.  I wish I knew that photos were allowed outside as I didn’t take too many photos outside until it was too late.  The roof area was a bit small but it is a must see.  In the basement, there is a small courtyard where you can enjoy a small garden and a little peace and quiet if you are lucky.  Because there are so many people visiting the museum all the time, it can be difficult to enjoy it.  They left no detail out of the design process and every little thing that you see has a specific purpose.  It is a lot of fun to look around and try to spot anything creative that most people probably won’t notice.  The only problem with the outside area is the café.  The café had a huge line when I visited and the food didn’t look reasonable.  While I understand a need to keep prices at a museum level, it was a little too expensive for my tastes.  Bring your own snacks when you visit and go to the adjacent park instead if you have the luxury of choice. 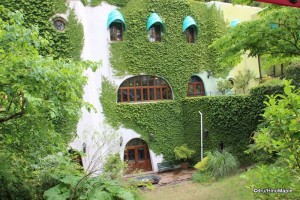 Outside the Ghibli Museum

The museum itself is well organized, but trying to make sure everyone was following the rules was a little difficult.  I went on a weekday morning, and I was a little surprised by the number of foreign visitors.  I saw all types, but the Chinese tourists definitely stood out.  It could have been the fact that they were taking photos inside the museum when they weren’t supposed to, but I felt the atmosphere of the museum was a little lost.  I did enjoy seeing all of the little kids just running all over the place.  I can only imagine how they felt to be in such a big play area.  The special exhibits were also very lovely.  They provided insights into the different aspects of making an animated movie.  I may have to revisit the Ghibli Museum again in the future, but to be very frank and honest, I doubt I will.