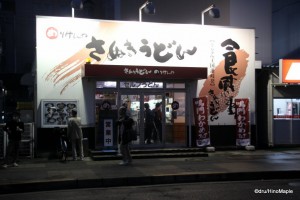 Sanuki is the old name for Kagawa Prefecture, which sits on the northern point of Shikoku. Its modern day use is not to describe Kagawa but to describe noodles. Sanuki Udon is a famous variation of udon in Japan. In fact, it is probably the main variant of udon today due to its popularity. You can get udon everywhere in Japan but the Sanuki style is the best, in my own personal opinion. It is cooked in an al dente style creating a chewier texture compared to regular udon. Some people don’t enjoy this but I do. It is difficult to keep this texture of udon so it is often better to have it in a cold broth rather than a hot one. I do enjoy hot udon noodles but the cold broth makes it taste much better for me as the texture is retained. There are several different shops where you can eat Sanuki Udon around Japan with the most famous being the Marugame or Hanamaru udon chains. Both are large chains with their own udon. Marugame is probably the more famous of the two due to their popularity and growth outside of Japan. Marugame has shops all over Japan including shops in China, Hong Kong, Australia, and Russia. They make all of their udon on site and require all of their shops to have a Japanese style of service. It was interesting to see the Taiwan branch having a special discount for people who use the standing bar counter to eat. The typical standing and eating style of restaurant is not popular in Taiwan so they created a discount for people who would like to do that. Hanamaru is also a famous chain, but unlike Marugame, Hanamaru is originally from Takamatsu. Marugame is originally from Hyogo. Both are good shops and wherever you go in Japan you will be able to get authentic Sanuki Udon if you go to either of these shops. 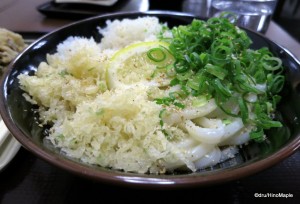 Kagawa is of course well known for udon and it is possible to find udon everywhere you go. It isn’t difficult to find a shop but if you want regular udon, any chain shop is good. I went to a small udon shop near Takamatsu Station. I don’t know the full name but it was Sanuki Udon. It was a simple shop that closed early, a little too early so I couldn’t always get udon when I wanted it. They had your typical udon but I always order the bukkake udon because it can have cold broth. It is very simple as it has daikon oroshi, green onions, and a lemon wedge. It is refreshing, but works better on hot days. One word or advice, avoid getting the large bowl as it was too much for most people, including me and I it was a bit of a chore to eat the whole thing. It was delicious nonetheless. Thankfully you can try udon at many other places too but the most famous places usually have a line of people outside as well as being in an area where you would likely have to drive to get there. I personally won’t go too far just for udon but if I’m in the area I would try it. I don’t mind eating udon almost every day but unfortunately due to my schedule in Takamatsu, I only had it once. Getting udon for dinner is not very popular so I just couldn’t do it as often as I would have liked. If you are in Takamatsu, or Kagawa, you must eat udon at least once. If you are not, you can try to have udon if you go to one of the famous chains in Japan and you won’t be disappointed.