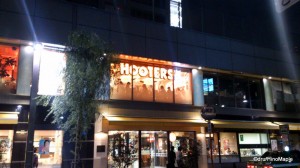 Hooters is a famous restaurant chain in America that started in 1983. I had one opportunity to visit Hooters when I was younger and living in Canada, but back then it wasn’t very appealing to me. The image of Hooters at that time was not very good and yes, it is very sexist. It feels like only America could create a restaurant concept where women were treated as objects, yet I’m sure the tips in those restaurants could be very high. I doubt it is very different from teaching English in an English conversation school in Japan though. 🙂 The first Tokyo restaurant opened in 2010 and it opened to much fanfare. It was difficult to get into the restaurant and it was positioned in a good location. The first Hooters Tokyo was opened in the expensive Akasaka area where there are a lot of embassies and offices. Needless to say, things were a success and the second restaurant, Hooters Ginza was opened in 2012. They continue to expand with a new Osaka and Otemachi beer garden opening this week. (June 2013)  It appears to be a small temporary summer only shop for these new beer gardens. There must be something about their famous wings and burgers because the restaurant was pretty busy when I went. 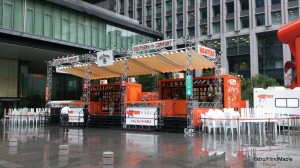 The atmosphere is pretty strange when I went to Hooters. Their TVs had a mixture of shows on. They had a supermodel show showing models in lingerie, and two different sports channels. It was an F1 weekend and I was surprised that they didn’t bother to show the F1 race. I do wonder if they’d show the Japan Football games, so I guess I’ll have to drag myself there to see if they do that or not. The interior is very orange to correspond to their corporate colours and the girls wore the standard tank tops and short shorts. It was not hard on the eyes; that’s for sure. The food was not the greatest but it wasn’t bad either. You can’t go wrong with breaded wings and other deep fried finger foods. It was as close to going to America as I could get, but it wasn’t cheap. The drinks were a surprise as the prices were higher than I had expected. Thankfully they had bottles of American beer, the good stuff, not just Budweiser. For the wings alone, I would go back to Hooters but only because Japan doesn’t have enough places with good wings. They tend to be small and expensive. While Hooters’ wings are not that big, and they aren’t that cheap, they are better than most places I have been to with their mini-wings. I doubt I’ll head to Hooters often as the price is just restrictive to my pocketbook, but I might head back for a quick meal in the future.

Update:  I have updated information regarding the new Osaka and Otemachi shops.  I mistakenly thought the Osaka shop was a real shop, but it is a beer garden shop along with Otemachi.