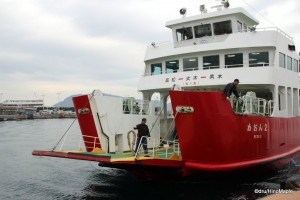 Ogijima is a quaint little 1.37 square kilometre island with about 160 inhabitants.  It is not difficult to access from Takamatsu and the ferry is one of the cuter ferries of the entire fleet that departs from Takamatsu.  The ferry is unique in that it is almost completely red with a picture of a light house and an oni (demon/ogre) on the side.  Japanese oni tend to look cuter than they should, with a typical Kappa being another demon that has been altered into a cute character.  Ogijima, literally translated as Man Tree Island, and it is one of a pair of islands.  It is paired with Megijima, Woman Tree Island.  Out of the two, Ogijima was my personal favourite and probably my favourite island out of all of the islands I had visited for the Setouchi Triennale.  I never got a chance to visit Shodoshima, and I highly doubt that Shodoshima would impress me as much as Ogijima due to its size and the remoteness of the various artworks, but only a future trip to Shodoshima will allow me to make a true final decision.

Ogijima is what I would call an ideal art island for the entire Triennale.  It is the 4th smallest site out the spring edition of the Triennale and easily visited in half a day, or a very lazy full day.  Once the ferry docks with the port, you are immediately greeted by the first artwork.  As you exit the ferry you will see “Ogijimas Soul” by Jaume Plensa.  It is a somewhat large building used as a ferry terminal.  The roof is designed to have letters from various languages from around the world to signify human diversity.  I found it to be a very interesting and playful roof that leant itself to many photo opportunities.  The only problem was that everyone else had the exact same idea so getting photos without anyone there will be difficult during the festival season.  The interior was really nice and the moat surrounding the building was very tranquil when I visited.  This was mainly due to the lack of wind but it was perfect.  Next to Ogijimas Soul was “The Ordinary” by Eriko Yano.  This artwork is supposed to be a rest stop in an artistic setting.  It was a simple piece that was childlike in character.  It wasn’t my thing but I can see how others may feel it is good.  There was a lot of other free art in Ogijima as well.  One of the most prolific was “Project for wall painting in lane, ogijima wallalley” by Rikuji Makabe.  It was just a series of painted wooden boards that adorn the side of various houses within the main town area.  Located in 6 areas around the central town overlooking the port, it was fun to seek out each one but to be honest, they all looked the same.  It did brighten up the entire island though.  There was also “Organ” by Tomoko Taniguchi.  It was simply a series of pipes that spanned roughly 100 metres.  The first time I encountered it, it was just a simple tube and the description was simply saying to call out and see who answers.  Like the old telephone games you play as a child, you try to connect with other people on the other end. I tried this but failed to really communicate with my friend who was down the hill.  There were also 2 plungers where you could make various noises that coursed through the pipes.  Finally there is “Houses for Light” by Arthur Huang.  It was a small public art where he created a lighthouse base with a small town, Ogijima, on top.  These were pretty small overall but it was fun to see how much detail he put into each of them.  There were a total of 3 when I went with two in the main village and one being near the lighthouse.

“The Ordinary” by Eriko Yano 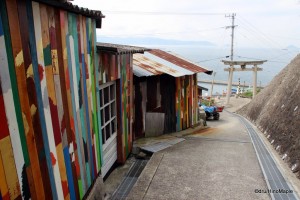 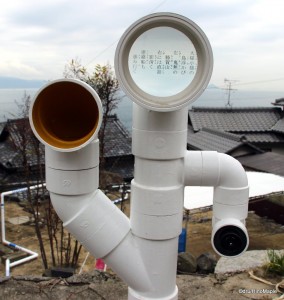 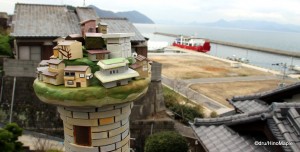 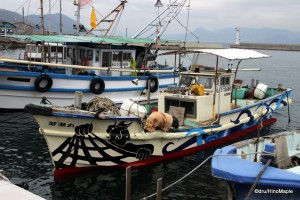 Back in the port itself, there was a great artwork called “OGI Project” by TEAM OGI.  The OGI Project is a multipart project that encompasses several fishing boats and various flags.  There were a few boats in the harbour that had wonderful paintings on the side that ranged from coy, octopi, and sakura.  The image of these boats were made even better by the fact one of the old fishermen was tending his nets on one of the boats next to an image of Ebisu, the god of fishermen, luck, working men, and one of the seven gods of fortune.  TEAM OGI also created various flags for the village to put up.  These flags are used for celebrations such as the completion of the art projects, a good catch, and other personal celebrations.  I really enjoyed the words by TEAM OGI as they had a slightly different take on the name by using the characters “男気” which can be translated as “manly” or “chivalrous spirit”.  I prefer to use it more as saying, “I’m the man!” so you have to prove your manhood by being generous. 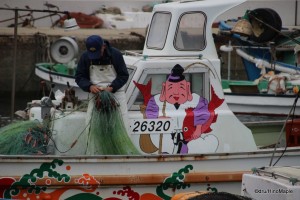 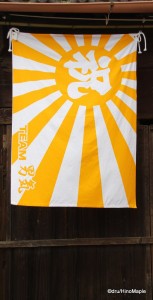 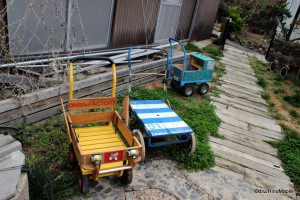 Ogijima actually has 2 multipart projects.  The other is “ONBA FACTORY” by ONBA FACTORY.  ONBA FACTORY is combined with the ONBA CAFÉ which is one of the few cafes in Ogijima.  Overlooking the port, you can enjoy a nice drink and a snack while enjoying the wonderful art in the courtyard.  You can also learn about the onba itself.  Onba is a type of cart or stroller and they have been creating them for the islanders since the last festival.  Each stroller is unique and serves a purpose.  Some of them are specifically designed for transporting specific items while others are purely ornamental.  Perhaps it was designed more for helping people get around.  Most of them are for simple things such as groceries, from what I could tell.  Inside the café, you can also take a look at some of the cart designs, who they were designed for, and why they were designed that way.  You can even see the carts all over Ogijima as the people really do use them.  ONBA CAFÉ also has some of their own items for sale, as well as a few items from TEAM OGI.  For those who purchase a guide book, I highly recommend looking into buying one of their book covers.  I picked up the TEAM OGI cover and the girl at the shop said it was waterproof.  I think it was water resistant more than waterproof.  The girl at the shop was really sweet too.  She was one of the nice characters of the island.  I met her when I first got to the island as ONBA FACTORY was one of the first places I visited.  She proceeded to run around part of the island and when I returned to wait for my ferry, she remembered us.  I enjoyed my time at ONBA CAFÉ so much that I actually missed my ferry.  I saw it come in but was so relaxed I forgot to double check the time.  I actually misread the departure time as being 1320, when it was actually 1300.  I mistakenly took the Megijima departure time for the Ogijima departure and had to spend an extra 2 hours on Ogijima.  It was okay though as I did love the island. 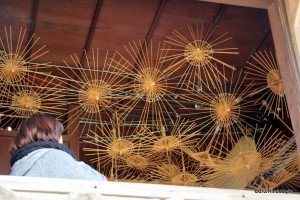 “Corridor of Time” by Takashi Nishibori

Finally, around the port there were several art houses, although they aren’t really linked to Benesse as the houses on Naoshima, Inujima, and Teshima appear to be.  They appear to be temporary exhibits but it would be great if they were permanent exhibits.  The last house I visited, but the closest to the port is “Corridor of Time” by Takashi Nishibori.  From Dave@Ogijima, I learned a lot more about the art and a bit about the previous artwork Takashi made for the last festival.  I was still impressed by the artwork and the turning skeletons of umbrellas were impressive.  I was more impressed by the first floor than the second floor as the first floor had umbrellas everywhere and it created a more peaceful atmosphere as there were no sounds of motors.  I then headed to “Water Mirror” by Sayaka Ishizuka after visiting ONBA FACTORY.  Water Mirror was an interesting piece as Sayaka gathered various household items from the islanders and hung them in the middle of the room.  Combined with the bright lights outside, it was a stunning piece to look at and all of the items were made to look like islands as well as provide various aspects for taking photos.  “Time Tube” by Takeshi Kawashima & Dream Friends was a wonderful piece of work that was at Dream Café, one of the restaurants on Ogijima.  Time Tube was nothing more than a series of rolled up magazines and newspapers set in an all-white room with a couple mirrors.  The amazing part was the kaleidoscopes that they provided.  It created a very different view of the interior and a bit of a game to see things differently without hitting any of the magazines.  Outside, they also had another kaleidoscope the size of a telescope.  It was fun to put people in front of it and see various images of people from the view of a kaleidoscope. 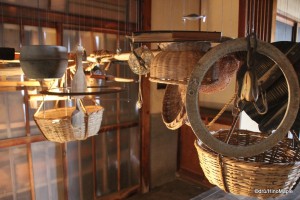 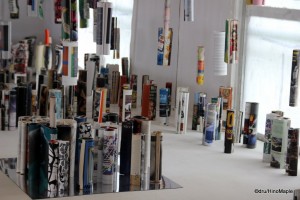 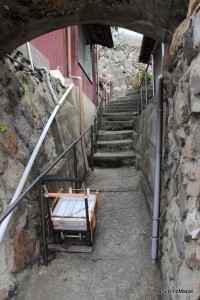 Ogijima has a lot to offer and a lot to see.  Unfortunately there just isn’t enough space to write about it all at once.  As you can tell, I enjoyed myself a lot and even though I spent just over half a day on Ogijima, I could have easily spent the entire day there just relaxing and soaking up the atmosphere of the small town itself.  I would gladly go back during the next Triennale, and if I do end up in Takamatsu before that, I would gladly go back regardless and just spend an afternoon at the ONBA CAFÉ.

Bonus Video:  Here is a short video of the artwork  “Corridor of Time” by Takashi Nishibori