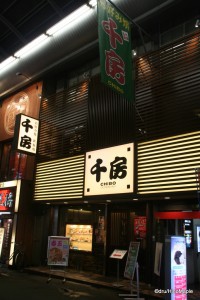 Japan can easily be considered the culinary capital of the world with its varied amounts of food.  The number of Michelin 3 star restaurants in Japan is unrivaled and the variety of food available that focuses on regional specialties feels unrivaled as well.  Coming from Canada where all of the food is pretty similar, Japan is a place where you can eat a lot of different things.  In Canada, there really isn’t anything that I could call “Canadian food” as most of it has come from other areas of the world through the immigration of immigrants.  Japan is different as a lot of the food is older, although a lot has also come from other countries.  Osaka is one area where you can get a lot of great food if you know what to look for.  It is not healthy and Osakans rarely eat the food that has been attributed to them every day but they do eat it often.  It is part of their culture and you really can’t do any better than by going to the source. 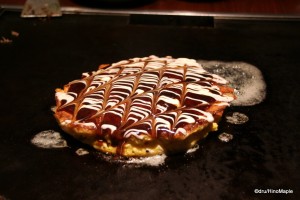 One of the first things one must try is okonomiyaki.  I explained in a previous post that okonomiyaki is a cross between a pancake and a pizza.  It is very much like a pancake in that it uses batter mixed with various ingredients.  It is closer to a pizza in the way that it is savoury, crispy, and sometimes greasy, but in a good way.  When eating okonomiyaki, you also have to learn how to cut the okonomiyaki itself.  In Tokyo, people tend to cut it into pizza slices whereas in Osaka, people cut it into squares.  Making okonomiyaki is very easy and takes very little effort.  All you do is mix a bowl full of batter and vegetables, then put it onto the griddle and flip it when it is ready.  When it is done, you top it off with okonomiyaki sauce, mayonaise, and aonegi, a type of dried seaweed.  While it is pretty easy to do it yourself, many shops will also cook it for you.  In Osaka, many shops let you do it yourself but you can also ask them to cook it for you if you are worried of making a mistake.  It can also be fun to see them finish it off for you too.  Some shops make a show of adding mayonnaise to the okonomiyaki.  In Tokyo, one shop will squeeze mayonnaise from about 1-2 metres from the okonomiyaki itself.  It is fun to watch mayonnaise fly across the room and onto the okonomiyaki but it is just a show.  It is still amazing to watch them put it on top as they do it very quickly and with enough style to amaze you.  The flavour of the okonomiyaki will depend on the shop you visit but they generally have similar flavours. 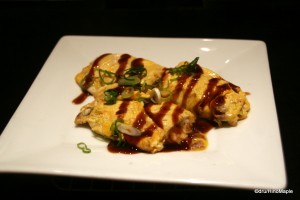 Another quintessential dish in Osaka is the tonpeiyaki.  It is a dish that is similar to okonomiyaki but rather than a pancake, it is more akin to an omelette.  Tonpeiyaki is a mix of cabbage and pork surrounded by egg.  You start by grilling the pork on the teppan griddle and then you add the cabbage.  This is followed up by pouring egg all over it and rolling it to resemble an omelette.  You can add various other things to it, such as mochi or cheese, but the basic style is pretty simple and delicious on its own.  When it is done, you just top it off with okonomiyaki sauce, mayonnaise, aonori, and bonito flakes.  Making tonpeiyaki may sound simple, but it is anything but simple.  Like making an omelette, it looks simple but it generally isn’t.  It takes time and practice to get it right each and every time.  Knowing when to serve it is also very important.  I am a person who enjoys runny eggs and tonpeiyaki is best served runny.  Many shops will unfortunately over cook the egg to be safe but having it a little runny means that when you do eat it, it won’t be over cooked. 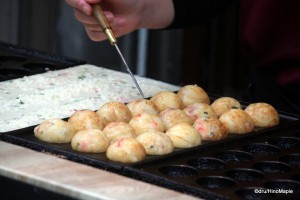 Takoyaki is something that must be tried in Osaka.  There are several types of takoyaki and Osaka’s takoyaki is unique.  In Tokyo, there is a company called Gindako that is well known for their takoyaki.  It is very crispy on the outside with a soft molten core of batter and a large piece of octopus inside.  This is very nice but Osakans don’t enjoy this style of takoyaki.  In Osaka, the takoyaki is grilled and served soft.  It isn’t too soft but it isn’t crispy either.  It is also just as hot as the Tokyo variety.  I do find that the overall taste between Tokyo and Osaka is generally the same but the softer style of takoyaki allows the flavours to blend a little more.  It doesn’t taste as greasy as the crispy style, but I do enjoy both.  There is another variety of takoyaki you can eat and it is called akashiyaki or tamagoyaki.  Akashiyaki is derived from the marriage of the words Akashi and takoyaki.  Akashi refers to a city west of Kobe and located at the main gateway to Shikoku.  Legend has it Akashi was the first area to develop the takoyaki in Japan.  Akashiyaki is similar to takoyaki, but it is much, much softer.  It is almost liquid in texture and you dip it into a special sauce rather than lathering okonomiyaki sauce and mayonnaise on top.  It is a little difficult to find, but you can find akashiyaki in Osaka as well and it is delicious.  It can be difficult to find it in other regions of Japan but it is still pretty famous. 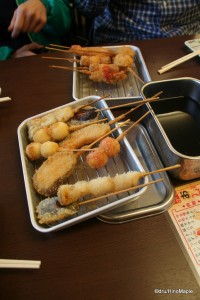 When visiting Osaka, teppanyaki is the main type of food you will eat but it isn’t the only type.  Kushikatsu is very famous in Osaka.  Kushikatsu is a type of food where you batter, bread, and deep fry small sticks of meat and vegetables.  It was originally designed for pork but it has expanded a lot.  It is particularly popular in the Shinsekai area of Osaka.  Kushikatsu is not the healthiest food in the world but it isn’t the unhealthiest either.  I was very surprised that kushikatsu is not as oily as I had expected.  You are basically given several skewers that you order and then you proceed to dip it into a special sauce and eat it.  The special sauce is usually a big box in the middle of the table that is used for all of the customers.  There are a lot of signs that say “no double dipping” but you never really know if everyone follows this rule.  It is very delicious and something I highly recommend trying.  I initially thought that kushikatsu would be very heavy as it is deep fried food on a stick, but I was very surprised by the light feeling of kushikatsu.  While I wouldn’t eat it every day, I did enjoy it enough that I would love to try more.  The atmosphere of eating kushikatsu is also a lot of fun.  In Shinseikai, the atmosphere of being in a touristy style restaurant was fun and helped me feel as if I was on vacation.  They tend to be older establishments as well, adding to the atmosphere that the dish has a lot more history than you would imagine. 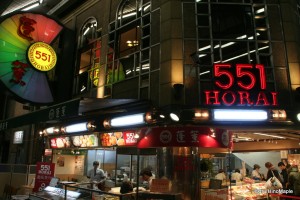 The last food people must try when they visit Osaka is the Chinese buns.  A company called 551 Horai is very famous in Osaka and everyone loves to eat at 551 Horai.  In Osaka and Kansai, people call it 551 (go-go-ichi), but in Tokyo, most of the people I have talked to understand Horai more than 551.  It is a strange way of communicating the name of the shop, but I still prefer 551.  551 is not the best Chinese restaurant in the world but I would argue that it is the best Chinese restaurant in Japan.  The main items they have are nikuman, shu mai, gyoza, and chimaki.  Nikuman is a simple steamed pork bun, but unlike the Cantonese version, in Japan they just use a plain sauce and dip it in soy sauce and hot chili oil.  Shu mai are simply steamed pork dumplings.  They are pretty standard in both China and Japan but I find the Japanese version to be too smooth.  The meat is usually too soft to the point it feels as if I’m eating a dense pudding.  551 does a good job with their shu mai so that it doesn’t feel so soft, but it isn’t the perfect texture for me.  The gyoza at 551 is very standard for Japan but the chimaki is special.  I love to eat chimaki, also called zongzi in Chinese.  It is meat and mushrooms wrapped in sticky rice, which is then wrapped in bamboo leaves and steamed.  It can be a little difficult to find chimaki in Japan but it has been becoming more and more popular.  I find that 551 does one of the best jobs with it and I love to get it when I visit 551.  While many people eat 551 at the restaurant, I often prefer to get take out and eat it at my hotel or on the Shinkansen.  When visiting Osaka, it is a tradition for many people to buy a bunch of nikuman at Shin-Osaka Station and eat the buns on the train.  It is a great way to make people jealous but you can’t beat having Chinese food and a beer for a 3 hour journey back to Tokyo. 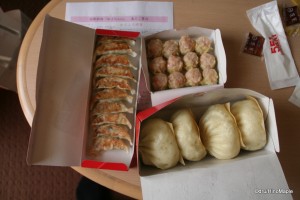 Any foodie will tell you that Japan is a great place to eat.  There are so many restaurants and so many things to try.  Osaka is no exception and whenever I visit Osaka, I am hell bent on eating as much as I can.  Whether my stomach can handle so much food or not is always out of the question.  I will be eating whatever I can get my hands on, and I won’t stop till I nearly collapse from overeating.  It is a terrible waste to go to Osaka and not eat the various local foods.  You cannot get the same foods in Tokyo because it is very difficult to find people who are skilled enough to make Kansai food.  Osaka is one of the few areas where you can actually find travel magazines that talk about nothing but food and where to get the best food.  Hopefully some of the places I have mentioned and the foods I mentioned will help you narrow things down and you can easily find good eats.