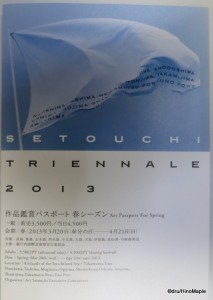 This year is the will the second time the Setouchi Art Festival will be held.  It was first held in 2010 to help revitalize the area.  The Setouchi area is a waterway between Shikoku and Honshu that runs along the northern coast of Shikoku.  In 2010, it occupied 7 islands between Kagawa and Okayama along with the port in Takamatsu.  This year, it will add 4 more islands just west of the Seto Ohashi as well as the port of Uno in Okayama.  While the 4 extra islands are new, they won’t be part of the full annual display.  Officially, the festival is being held in spring, summer and fall.  Each season, the festival will be run for one month each, but I doubt the art will be removed and changed each season.  Art will be added each season with the summer season being the best time to see things.  Only the original 7 islands will be “open” for all three seasons, and the other 4 islands will be open for one season each.  If you haven’t heard about this festival, you are really missing out.  There is a lot to see and it will take a long time to see it all. 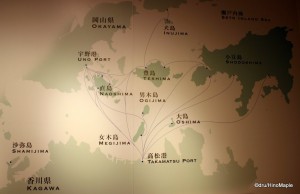 If you are wondering what is so special about this art festival, it is best to ask someone who has been to Naoshima.  Naoshima was the focal point of the area before the art festival started.  I last visited Naoshima in 2009 during my Great Motorcycle Adventure Take II.  I spent a day in Naoshima and had a blast, even though the weather wasn’t very good.  I missed the festival in 2010 as I didn’t know it was happening, but this year I won’t be missing it.  I will be going next month and will hopefully have many things to say.  If you are thinking of going, they are selling various passes to make things easier.  There is a passport for each season, or an all season passport.  The passport will grant you access to most of the installations although some of them will require an extra fee, but discounted from the original ticket price.  Then there are various ferry discounts.  I still haven’t been able to learn more about them, if they are worth it for me or not, but I will be trying my best to make use of as many discounts as I can.  If you can’t make it, you can always try buying the guidebook.  It is available in Japanese only, but at least you can see small pictures of the art.  If you are in Tokyo, this weekend will be your last chance to see a special preview of the festival in Shibuya.  Shibuya’s Hikarie is holding a small gallery featuring information about the festival itself.  Even if you aren’t planning to go soon, you can always take a look at some of the information and plan your own adventure.  If you can’t go, you best bet will be to stay tuned as I’ll be writing about it when I do get back.  I’ll have a busy few months writing but it will be a lot of fun!

PS:  I just bought a new camera!  While I still have many posts coming up that have old photos, my Setouchi Art Festival photos will be using my new camera.  The photos may not look very different as I’m still using an old lens, and my own technique won’t have developed as much, but I’m still excited.  I’ll also take a few videos if I can but it might get too large.

Update:  Note that earlier this post stated that the extra islands were between Ehime and Hiroshima.  This is not true.  The extra islands are located west of the Seto Ohashi (Great Seto Bridge).

Setouchi Art Festival (Preview) is a preview for the entire Setouchi Triennale.  To read all about the festival, follow the links below: