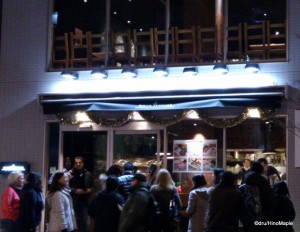 Update: As of the summer of 2013, White Smoke, the restaurant, had closed due to fire.  They decided not to reopen.  They decided to refocus on selling smoked meats at local supermarkets and shops and can be found, although I find it difficult to do so.

White Smoke is a new eatery in Azabu that has been gaining popularity very quickly.  They opened over a year ago and they are still going strong.  They are billed as a Texas Smokehouse.  A Texas Smokehouse, as they say, is a place where barbecue is made using a slow cooking process of nothing but wood chips.  There is no liquid smoke and no gas heaters to help with the cooking process.  Everything is done in the slow traditional way of southern barbecue.  They also use a dry rub which they say helps keep the meaty flavour.  The prices are a little steep when you look at it but the flavours and quality of the food more than make up for it.  They have a special 5000 Yen all you can eat special from Monday to Wednesday and that is the course that I had.  It was really good and I can still taste the meat, even a week after eating it! 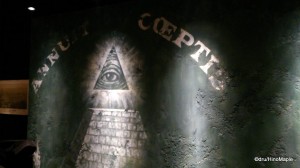 The restaurant ambiance is fairly unique.  The main floor is pretty small as the kitchen area takes up most of the space.  There is a small bar counter but the ambiance and smells are divine.  The second floor is the dining area.  It has a very American décor.  One wall has images from the US dollar bill and there is a column decorated in pennies.  The dark atmosphere is pretty interesting and it prevents the smokiness from being noticed.  While the second floor is not located next to the kitchen, the smoke from the kitchen still reaches the dining floor so that you still get the whiff of smoke.  It is a great experience that is made even better with the food. 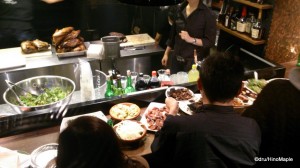 The night I went was a friend’s party, and just less than 100 people showed up.  It was a great time and the second I arrived inside, there was food and beer waiting for me.  The first plate or plates were sausages and wings.  The chicken wings were good but the sausages were divine.  The “Spicy Smoked Beef Sausages” were soft, full of flavour, and melted in your mouth.  I could have easily eaten just sausages the whole night, but it was early in the evening so I had to pace myself.  For the main dish, we were served turkey breast, brisket, and ribs.  We also had a side of salad and mashed potatoes.  All of it was buffet style.  The brisket was the best meat, although other people disagreed.  Either way, it was all very good.  My stomach was completely filled by the end of the night and I could barely walk.  If someone punched me in the stomach, food would have been coming out.  I ate more than I should have but it was definitely worth it.  I had a great time and got to have great barbecue. 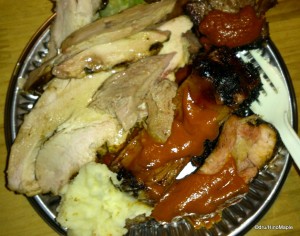 White Smoke is a great place to go for barbecue.  I would love to go there more often but it is likely that I will be too lazy to head to Roppongi/Azabu-juban.  It is also a bit expensive for me to go there every day, but once in a while I would love to visit White Smoke.  If you live in Tokyo and really have a craving for good barbecue, White Smoke is one place you can visit. I haven’t been to other places so I can’t comment on them, but I do know that I would go back again if the opportunity, and money, arises.