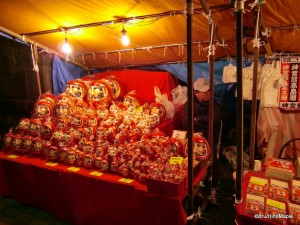 Daruma dolls are an icon at this time of year.  They are a common practice of various people to make wishes for the New Year.  You can easily recognize them if you visit a shrine or a temple as they are a round red doll with a face without eyes on it.  The tradition itself started in Gunma where it is claimed that in the town of Takasaki, specifically at Shorinzan Darumaji, the Daruma was born.  The tale states that the priests were always busy making charms for the locals.  The problem was that charms often last for just one year and the monks couldn’t really keep up with the demand, so they encouraged the locals to make their own charms based on wooden moulds and the monks would bless them.  This tradition would become popular in Takasaki and the entire town became known for Daruma dolls.  Takasaki is still the largest producer of Daruma today with about 80% of the total production in Japan.  Takasaki is still working hard to keep their claim to fame as they still have a major festival at the beginning of the year where they sell thousands of Daruma dolls. 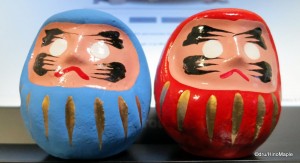 My Daruma, Before Eye Painting

Daruma come in many sizes and colours.  The most common version is a red Daruma.  From what I can understand, it comes from the original colours of a monk’s clothing.  Daruma itself is a representation of the Buddhist monk named Bodhidharma, or in the short Japanese phonetic form, Daruma.  Daruma are generally made of papier-mache and the majority of the red ones come weighted so that they always return to the standing position.  Daruma are very popular for people who have specific goals in life.  They are especially popular during the election season as most politicians buy one and then make a wish to win the election when the campaigning starts.  Daruma are created without eyes because you need to paint the eyes yourself.  The goal is to paint one eye as you make your wish and then paint the other eye when it comes true.  Everything I have read says that you should paint the right eye.  The only problem is that the majority of people don’t specify which eye is the right eye.  I decided to paint the Daruma’s right eye, rather than the eye on the right, in hopes I had it right.  Unfortunately, I may be wrong and the Daruma’s left eye is the proper eye.  This isn’t a big problem as it is all superstition anyways.  When searching for information for this post I discovered that it does appear that the doll’s left eye is the most popular but there were several images showing the right eye being painted as well.  I’m not too sure which one is correct, but unless you truly believe in a superstition, there isn’t any need to worry.  The main thing to understand is that the one eye is open to keep an eye on you and make sure you are working towards your goal. 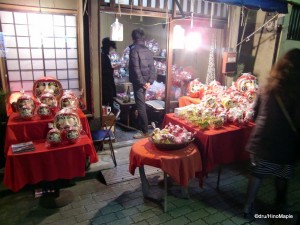 Daruma come in a variety of colours.  When going to a shrine or temple, you will be able to ask what the differences are, but for the most part, there isn’t a lot of information.  I checked several websites, many in Japanese using Google Translate, and I found several inconsistencies with what they said.  Basically, here is a break down as to what the main colours mean:

*For links to websites with information about each colour, please see the end of this post. 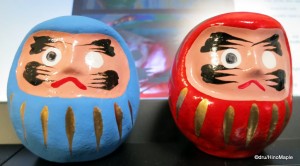 Daruma With the Eyes Painted

As you can see, there is a lot of information about the Daruma, yet there isn’t that much to know.  It appears that the Daruma doll itself is a relatively recent “invention” as this tradition was started in the mid-1700s.  It is still a fun tradition and something that I have seen but have never truly looked into until this year.  With my hopes and ambitions to get a product for my company, I decided I needed a little help to get it going, so I decided this would be the first year I would try to make a wish and set a goal with the Daruma doll.  One unfortunate thing is that these dolls are not cheap.  For a small one, they start at around 1000 yen each.  The two I bought are the same size and cost 1000 yen each.  I was expecting about half the price, but Japan and lucky charms are going to be expensive.  I’m not disappointed as it is an interesting little lucky charm and I am hoping that it will help me this year.  Hopefully I’ll have another report in a few months if my first wish comes true.