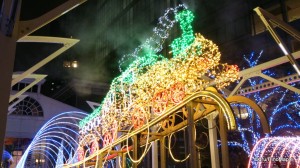 2012 Christmas in Shinbashi and Shiodome

Shinbashi, or Shiodome, has been a central point for Christmas for the last few years. As I mentioned in 2011 Christmas in Tokyo, the popularity of Christmas Lights started in Omotesando and has spread quickly into many of the other major centres throughout Tokyo. Shinbashi and Shiodome, pretty much the same place, has been having their own lighting display for the last few years. The best display has to be at Caretta Shiodome. It is in the basement plaza of the Caretta building and they combine a lot of blue lights to make a magnificent display. It tends to be overly blue but it did grow on me. If you are looking for something more traditional, you can head next door to the Shiodome City Center building and in the basement plaza they have a small display with Santa in his workshop. It is a bit popular so getting a photo will require patience. If you head to the street level of the Shiodome City Center building, you will be at the old Shinbashi Station. Every year they put up a train display. It is a big train made of lights and steam tubes to simulate a steam locomotive. The train appears to be taking off similar to the manga Galaxy Express 999. At the SL Plaza outside the Hibiya Exit of the JR Shinbashi Station, you can see another annual display where they put Christmas lights on and around the old steam locomotive that is permanently on display there. They even put Santa into the driver’s seat! It is a nice display but unfortunately it is difficult to photograph because there are lots of smokers in front of the display. Shinbashi is one of the best places to see Christmas Lights. While Nippon Television isn’t doing anything special this year, as far as I can tell, Shinbashi and Shiodome is still a great place if you want a little Christmas cheer. 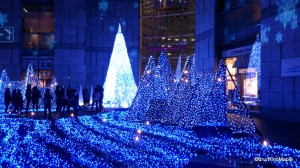 2012 Christmas at the Caretta Shiodome

Note:  There are more photos on my Facebook Page.  Please check back again around Christmas as I will add more photos of Sky Tree at night.  You can directly view the photos here:  HinoMaple @ Facebook: Shinbashi and Shiodome Christmas

The train display at the old Shinbashi Station