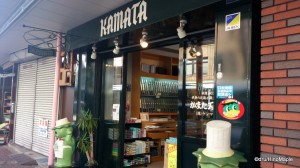 I recently went to Kappabashi to get a gift for my trip home.  I went mainly to purchase a knife.  I know it is a bit of a taboo to buy a knife as a gift, but I’ll exercise caution as it is for family.  I went without any knowledge of knives and I was pleasantly surprised after visiting several shops that one of the staff finally approached me and started to be friendly.  I was in a shop called Kamata.  It isn’t one of the small old looking shops but one that looked old enough.  They had displays with about a hundred or so knives.  They all had different shapes and different uses.  I explained that I was looking for an all-purpose kitchen knife and he proceeded to explain everything I really needed to know.  He knew I wasn’t an expert and just looking for something as a gift.  He was really polite about it and went to the trouble to explain things in Japanese.  Thankfully my Japanese was good enough to follow him.  He started to show me several of the basic chef knives.  There were several varieties but since it was a gift from Japan, I was only interested in the Japanese style knives.  Getting a single pressed knife is pretty easy anywhere in the world.  Getting a folded knife is a different story.  I was presented with several choices but in general, he said that they were all the same. 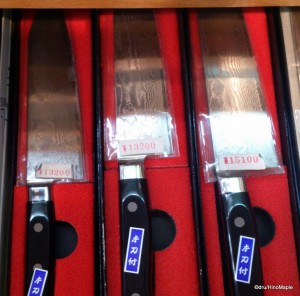 The first choice I had to make was which one to go for.  Some had different handles.  One was ergonomic, another was slip resistant.  One knife was special just because it had a blue handle, and nothing else.  Then he explained the folded steel knives.  One was folded just 3 times, and the one I eventually bought was folded 63 times.  It is a bit harder and of course more expensive, but the knife that was folded 63 times would stay sharp for about half a year.  The 3 fold knife would only stay sharp for about 3 months or so.  Not a huge difference, but large enough.  I asked a bit about the shape too; rather he explained it all to me.  He explained that a traditional Japanese knife was merged with western knives to create a hybrid, the santoku knife.  A western chef knife is a bit longer and shorter than a santoku.  The same amount of metal is used, but the shape is slightly different.  The difference in shape is less than a centimetre but it is large enough to notice when you see them side by side.  There really isn’t a big difference but the santoku, being shorter and taller, is better for vegetables.  Western style chef knives tend to be better at cutting meat.  Both styles are not suited for hard objects such as bones or frozen food because the knives are very thin.  A meat cleaver would be better suited for this situation. 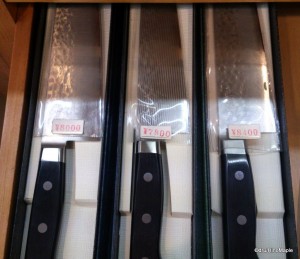 When I did a little research after I went shopping, I discovered Kamata’s website as well as what I think are the knives that I was looking at.  The knife I eventually bought was the V10 Damascus Steel Santoku Knife.  I was also looking at the V10 Damascus Steel Chef Knife but decided that a Japanese style knife would be a better gift.  Either way, both knives were really nice.  I do recommend this shop for the service, although all of the other shops were quite nice.  I was more impressed by the fact that they carry mostly their own custom knives.  Most of them are made for their shop only and they are all stamped with their own name.  It is a good tradition in Japan and I will probably go back to buy another knife for myself in the future when I decide to get another one. 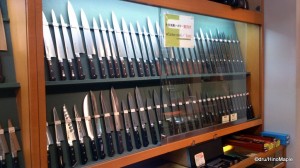