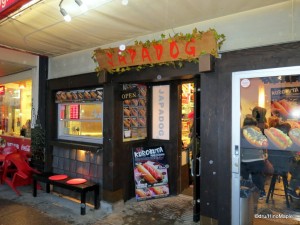 Japadog is a very famous institution in Vancouver.  It is one of the most famous hot dog stands in Vancouver that started in 2005.  It is in all of the Japanese guidebooks and a local hot spot.  Many celebrities have visited Japadog in the past and many of them love it.  Japadog is a simple concept.  Take an American staple, the hot dog, and give it a Japanese twist.  I first heard about it soon after they opened in 2005 but never really gave it much interest.  This could be due to the fact that I had left Vancouver for Tokyo in the same year Japadog opened and when I returned I couldn’t imagine all the hype with it.  Japadog is very famous and many celebrities visit Japadog when they are in Vancouver.  Japadog started out as a single hot dog stand in downtown Vancouver and has expanded into 6 stands and 1 shop in the Vancouver area and a store in New York.  They even have plans to expand into Los Angeles.  I do wish that they would consider expanding into Tokyo rather than other locations in North America, but that is just me being greedy. 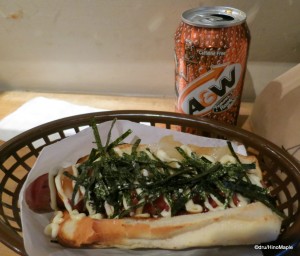 What makes Japadog special is their menu.  Rather than having a simple hot dog, they specialize in toppings.  Of course you can get the simple beef, pork, and turkey hot dogs but that is not why people visit Japadog.  The signature item is the Terimayo.  I believe it is a beef hot dog topped with a teriyaki sauce, Japanese mayonnaise, and nori.  It is a perfect combination that is probably their most popular item.  I always want a Terimayo when I go to Japadog but I also enjoy their other offerings.  For Japanese people, I would recommend the Oroshi.  They take a pork sausage and top it with daikon, a ponzu sauce, and green onions.  It is very light and tastes great in the summer when the temperatures are very high.  It isn’t heavy like the Terimayo could be but it isn’t as good in the winter when you need something heartier.  From there, they have other variations such as Okonomi which has bonito flakes (katsuobushi) on top as well as the Negimiso which has miso, cabbage, and green onion.  Even the extra sauces are special as you can get more teriyaki sauce or even a wasabi mayo on top.  The last time I was there I forgot about it but that wasn’t a problem at all as it still tastes great the way they give it to you. 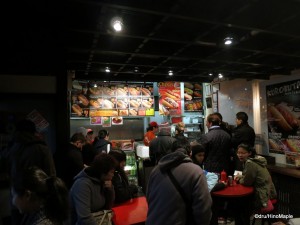 Inside the Japadog Shop

Japadog is a great place to eat and if you are in Vancouver, you must go there.  It is a staple which means that the shop is almost always busy.  In the 7 short years they have been in business, they have expanded and are becoming more and more international.  I can see them expanding into America at a healthy rate and keeping the culture of their shops.  They tend to hire all Japanese staff and most of them are quite young.  I would suspect that most of the staff is in Vancouver on working holidays and just earning a few bucks here and there.  Thankfully they keep their Japanese roots such as their hospitality.  They also speak Japanese so when I went in and spoke to them in Japanese it was no problem.  They are very good at switching between English and Japanese which is amazing.  It truly is a mix of east and west as cultures combine.  They keep their Japanese politeness but add western friendliness.  I would imagine most of the staff is from Kansai, but that is just a guess as I never had time to really ask them.  Maybe in the future I can ask but that may be a long time from now.  I hope I can get more Japadog sooner rather than later, but it looks like I’ll have to wait till I am visiting family and friends again. 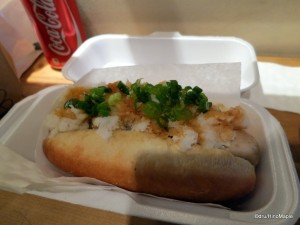